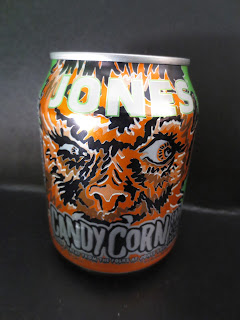 In 2005 Jones Soda released it's first batch of Halloween flavored sodas exclusively to Target, one of which was Candy Corn. It was a pretty tasty and novel treat that returned yearly until at least 2009 and then seemed to disappear. Well, it's back, along with Caramel Apple, Blood Orange, and Red Licorice. I found my soda at Target again, but I've heard a few other smaller stores are carrying it as well, so keep your eyes peeled. Ready for a swig of scary soda? Then join me after the break... 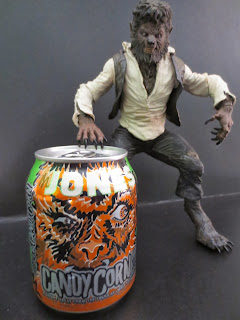 First, let's take a look at the can. I really like the sort of retro art design Jones Soda went with for these little 8 oz. cans and the werewolf here is no exception. He's a nice, bright orange color (kind of like the soda itself) on a green background. He's got his eyes looking to his left (your right) in a sly gaze. The Jones logo is at the top and outlined in the same slime green color as the can's background.  The wolf-man was used on the can for the 2008 release of the candy corn soda as well, so he's got a history with the product even though there's nothing about werewolves that immediately makes me think of candy corn. Or vice versa. 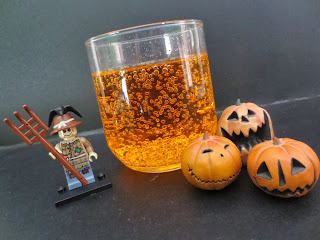 The soda has a beautiful orange color to it. It's very cheery and bright. If you like cream soda you're in luck because that's really what I would compare the flavor to, although it has a sweeter bite that's a bit like honey or butterscotch. The smell and the taste really do make one think of candy corn as you're drinking it. Arathaelia was around and drank some too and indicated that it made her think of caramel. Interesting. While I couldn't see drinking this all the time, it's definitely a pretty easy going flavor. I definitely would rank it above the Red Licorice soda out of the Jones Sodas I've tried so far this season.