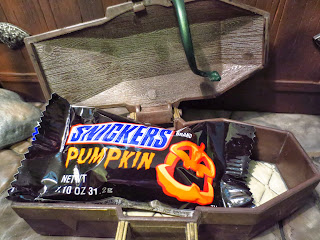 I've raved about the Snickers Peanut Butter Pumpkin many, many times, but I still haven't covered the regular Snickers Pumpkin yet. Well, here it is! It's basically a small snickers bar shaped like a pumpkin. If you like Snickers bars, you should like this. The ratio of chocolate to nougat, caramel, and peanuts is different, but that's probably a pretty minor issue for all but the most discerning Snickers eater. There isn't much to say about this, so I thought I'd interview horror icon Freddy Krueger about the Snickers Pumpkin because otherwise this would be really boring. Let's join him after the break.... 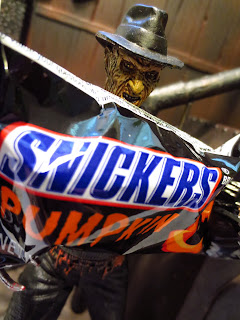 Freddy Krueger: How sweet, fresh meat!
*Freddy unwraps the pumpkin and stares at it*

BBQ17: So, what do you think of the pumpkin? 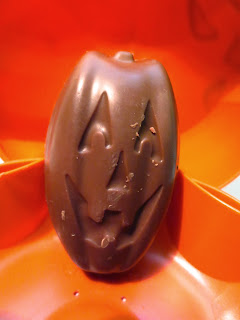 BBQ17: Why didn't you leave any for me? That was kind of rude!

*Freddy hands me the empty wrapper*

BBQ17: Umm, no. Anyways, any words for what people should do when they do to buy a Snicker's pumpkin?
FK: Tell 'em Freddy sent ya!