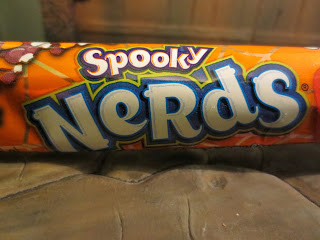 It's been a few days since I've reviewed any Halloween treats, so this week is going to be full blown, non-stop scary toys and junk food. Right now I'm looking at the Spooky Nerds Rope from Willy Wonka candy, a delicious mixture of Nerds and gummy candy. If you've never had a Nerds rope, it's essentially something similar to a Sour Punch Straw but instead of sour powder it's covered with Nerds candy. Of course, this isn't your standard Nerds Rope but a Spooky Nerds Rope. What makes it spooky? 1. The rope is covered with orange, purple, and white nerds and 2. Each rope is haunted by the ghost of an 19th century British orphan. Enjoy! 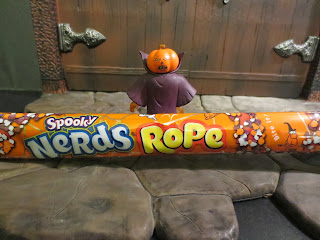 The package is pretty festive: it's orange with a spider web pattern and little Nerds leaping around dressed up in Halloween costumes like witches hats, bat wings, and spider webs. It's fun and festive! 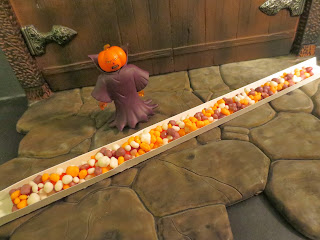 I'm not really sure what flavor the Nerds are supposed to be; Orange and Grape? Fruit punch? I really have no idea. They taste like Nerds which I tend to think taste all the same most of the time. The rope part is a sweet gummy candy, but it's difficult to taste since the Nerds are pretty sour. Basically, if you really like Nerds, you'll probably like this. I'm pretty neutral on it. It's not bad, but I can't see myself snagging another one of these this season. Maybe next year if they change the package, though.