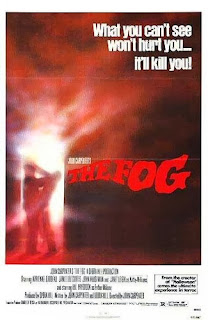 How do you follow up a film that changed the horror genre (arguably creating a new sub-genre), proved to be one of the most successful independent films of all time, and was positively reappraised by critics within a year of it's release? That's the struggle John Carpenter faced after the release of Halloween in 1978 and the film that followed it in 1980 was The Fog. In between the two films, Carpenter directed two television films including the very successful Elvis, his first pairing with Kurt Russell. While again pairing Carpenter's score and direction with the presence of Halloween stars Jamie Lee Curtis and Nancy Loomis, The Fog turns out to be a much different film than it's predecessor. It's a more traditional ghost story; something that feels like a cross between a vengeful ghost tale and Jaws involving lighthouses, ancient curses, buried secrets, and ghostly pirates. The Fog is not a great movie, but it's definitely a worthwhile horror film for a cold, foggy night. It's incredibly atmospheric and has a nice mystery at it's core that should appeal to most horror fans. Read on for a bit more analysis after the break...

I'll mention the atmosphere of the film, as it's truly the high point of the film. The Fog tells the tale of a group of vengeful ghosts returning to the California town of  Antonio Bay on the hundredth anniversary of their wrongful deaths seeking vengeance. As mysterious phenomena starts happening on the even of the town's centennial and a mysterious fog rolls in, the town's residents try to survive a killer they can hardly avoid. The vengeful spirits are portrayed as emerging from a ghostly fog and whenever that occurs, the results are incredibly intense. It really is quite spooky and great fun, as the ghostly seamen are incredibly brutal and their vengeance is depicted quite graphically. The atmosphere and tension of these scenes really carries the film as their composition and lighting is incredibly effective. Remember how scary is was in Garfield in Disguise the ghost pirates show up? Yeah, this is even creepier.

One of the weaknesses of The Fog is that it has too many characters and bounces between them frequently. There certainly are some very interesting characters in the film such as Hal Holbrook's role as the guilt ridden Father Malone and Barbeau's late night DJ Stevie Wayne, but we don't get to spend enough time with any of them. Few of the characters are simply "disposable ghost pirate fodder" but they're also just not given the chance to fully develop. The cast is certainly strong, though, with the aforementioned actors, the return of Jamie Lee Curtis and Nancy Loomis from Halloween, and the appearance historic scream queen Janet Leigh as a town official who wants to ensure that the celebration goes on no matter what.

Some critics and fans gush over The Fog, endlessly praising it's atmosphere, slow building tension, and old fashioned ghost story sensibilities while others dismiss is as being more of a dull, benign mist. I'm actually in the middle here and would be more likely to use Carpenter's own words to describe it- The Fog is a "minor horror classic." It's well worth watching, but certainly doesn't do anything terribly unique or different. The Fog was released at a weird time for horror movies as ghost stories were being exorcised in favor of bloody violent slasher films. The Fog tries to blend the two and while creating some undeniably classic images, ultimately doesn't have the sea legs to sustain itself as a true classic.