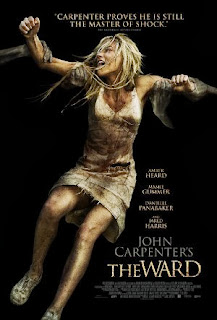 I just watched The Ward for the first time and I'll say off the bat that I'm disappointed. The movie isn't bad in the sense that you're going to groan your way through it, as it's well directed with a creepy atmosphere, features great visual effects, and has cast of strong actresses that you'd have to be crazy not to want to be locked in an asylum with. The Ward's problem is one that many mainstream horror movies struggled with in the 2000's, a problem which I refer to as M. Night Shyamalan syndrome: twist endings that radically alter the movie in such a way as to make everything you've watched feel meaningless. I'm going to try to make it through most of this review without spoiling everything, as the film is relatively new (it was released in 2010) but expect a fair amount of ranting here not because The Ward is terrible but because The Ward had the potential to be a very good film, kind of a horror cross version of Girl, Interrupted. read on for more thoughts, after the break...

In 1966 Kristen (Amber Heard) burns down an old house in the country. She gets caught at the seen by some police officers who seem to know who she is and is soon taken to a secure ward at the North Bend Psychiatric Hospital. Along with fellow residents Iris (Lyndsy Fonseca), Zoey (Laura Leigh), Emily (Mamie Gummer), and Sarah (Danielle Panabaker), Kristen deals with the bullying orderlies, the cruel head nurse, and the appearance of a mysterious and haunting figure that begins stalking the girls on the ward. Trapped within the ward, Kristen begins trying to uncover the mysterious disappearances of previous girls that she's learned about from her fellow patients while concocting a plan to escape before she suffers a similar fate. Listen, setting a film in a mental asylum, especially in the past, just automatically makes a film creepy. Asylums are a great setting for horror films and this one utilizes the setting well.

While the movie does have a creepy and tense atmosphere at times, it really relies on jump scares. I won't argue too against jump scares here because to be honest, I have to admit that most of them got me. I will say that if I were watching this film without knowing who the director was, I never would have guessed John Carpenter. That's not a good or a bad thing, just a fact. Typically Carpenter's inimitable style is immediately recognizable, but that's not as transparently on display here. There's no reason that a director can't utilize a different style in their methods, but I am curious as to what drew Carpenter to this film. It's just so...ordinary compared to most other films that Carpenter has worked on or written. I really should listen to the included commentary track (I'm not one that often listens to commentary tracks, sorry!).

So, it turns out that the film is really about a girl who has created multiple personalities and all of the residents of the ward that we've been meeting are not actual residents in a mental hospital, but in fact various aspects of the main character's personality. The main character played by Heard is actually named Alice and a part of her original personality is killing off the extra personalities through treatment. Yes, all of this is happening inside of someone's head. I hate that. Hate it, hate it, hate it. Unless a movie is extremely clever or extraordinarily unique, I hate when a film discounts everything we've seen or the characters we've grown to love. It's the narrative equivalent of learning that something was "just a dream" and it just feels like the audience has been cheated. The first two-thirds of this movie were great. The characters and the plot was set up well and the movie was both frightening and mysterious, but when this plot element gets introduced it just makes me feel like everything that matters has flown out the window. It feels almost exactly like the plot twist at the end of the film Identity, which is another film that isn't bad, but feels like a great concept that gets robbed of a satisfactory ending. I didn't dislike The Ward, but it wasn't ultimately as satisfying of a film as I hoped.