The Final Participation Thread: What is Your Most Memorable Haunted House Experience? 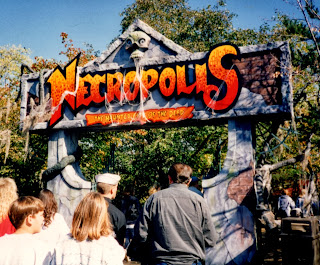 If you still haven't checked it out yet, head over and check out the rules and first participation thread for our Halloween Grab Bag 2013 Contest! The second participation thread is here and the third is here. There's only one week left (the contest ends Monday morning, October 28th!) so get your entries in! Remember, you can still send in fun size reviews, pumpkin pictures, and comment on the three previous participation threads to win a series 1 S.L.U.G. Zombie still in his plastic bag, a mint on card Catwoman action figure, or a brand new Adam West Batman from Mattel's 1966 Batman line! You can enter to win the drawing multiple times and it's completely free! You might even win multiple prizes! The easiest way to win is by simply leaving a comment in one of the four participation threads. This week's discussion? What's your most memorable haunted house experience? Most everyone (though not Arathaelia) loves to go to haunted houses in the month(s) leading up to Halloween! What experience was most memorable to you? Mine's after the break.... 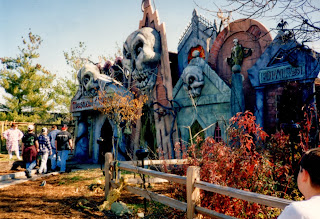 In the mid 1990's when my family lived outside of Chicago we went to Six Flags Great America for their annual Halloween themed horror event Fright Fest! To a young me, this was just an incredible experience. I've always loved Halloween, ghosts, and spoky stuff but I was actually pretty wimpy as a kid. I didn't see any really terrifying horror movies or go to any real haunted houses with live people inside, so Six Flags' Fright Fest was a gateway drug for me. As Obi-Wan Kenobi might say, I was taking my first steps into a larger world. Every inch of the park was decorated. The rivers and fountains ran red, most of the rides were either either haunted in some special way or were left running only occupied by corpses and skeletons, and there was no shortage of costumed characters roaming the park. This was during the Warner Brothers era of Six Flags Great America so members of the Red Triangle Circus Gang from Batman Returns rode through the park causing havoc and scenes from The Fugitive were played out on the usually tame train ride. But the best was Necropilis, the Haunted City of the Dead. Necropolis was a walk through trail that was quite freeform- it was essentially a small town that was inhabited by dead residents. You could walk through the various shops and buildings of the city and see a variety of ghastly sites. The residents would walk up to you and interact with park visitors. It terrified me as a kid, but fascinated me. It was kind of like Halloweentown from The Nightmare Before Christmas but darker and more sinister (at least to a 10 or 11 year old). At the center of Necropolis was the Mausoleum of Terror, a more traditional haunted house that cost extra to go through. I was far too scared to walk through it at the time, so I never went in. Sadly, we moved away from the area a year or two later and I never had the chance to experience it. Still, Necropolis stands out to me as one of the highlights of my childhood. I've talked about my giant haunted Lego town that sits in my hobby room; it's 100% a tribute to Necropolis. 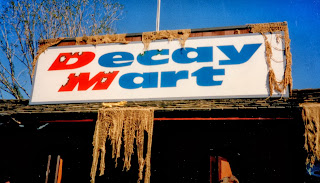 What's the most memorable haunted house, haunted trail, haunted barn, or any other haunted event that you've ever want to? Share it now in the comments and you could win some awesome prizes! Also, thanks to Dadecue17 for sending me these pictures from the family photo albums!