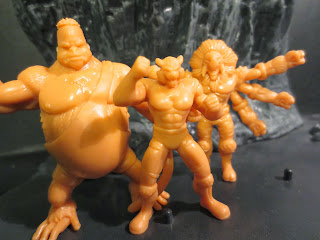 One of our first Epic Interviews was with Mark Vasquez, the owner of Fantastic Plastic Toys and creator of Mystical Warriors of the Ring; it was quite a few months ago so it's exciting to finally hold one of these cool toys in my hands. There have been quite a few releases in the line but this was the first set I was able to get a hold of due to the way these puppies have been selling out. Clearly an homage to M.U.S.C.L.E. and to the more flamboyant days of professional wrestling, Mystical Warriors of the Ring features a really cool cast of characters just waiting to wage war on your table or desk. Today I'm looking at the New York Comic Con exclusive series one set of Kayin Kungaa, Sheldon Sabre (unrobed), and Widowmaker. The figures come in a bagged set of three and were available in "Flesh" and "Candy Apple Red". I opted for the "Flesh" toned figures so that they'll fit in with my M.U.S.C.L.E. and OMFG figures, but now I kind of wish I had ordered both sets as these guys are awesome. Jump in for the full review after the break.... 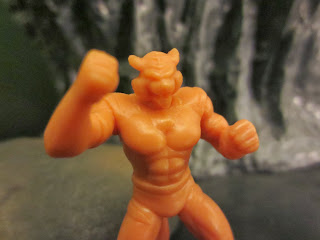 I'm assuming that Sheldon Sabre and Widowmaker are the normal sized characters in this line and considering their height (around 2 inches) to be the baseline. What's very cool is that Kayin Kungaa is larger (2 1/2 inches) making him really fearsome. It's neat to see MWOTR's ability to do fun figures in different sizes. While these are anthropomorphized animals, they're done in a more realistic style rather than a caricatured one. Remember that these are solid PVC figures with no articulation or paint. 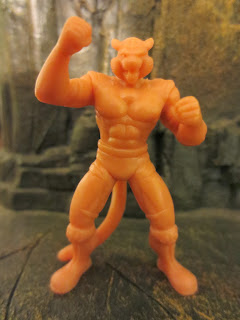 Sheldon Sabre- Sheldon Sabre is probably the most standard wrestler in the pack, but that doesn't at all mean that he's not interesting. A fierce looking tiger who appears to be a champion in the AWF, Sheldon is quite ripped and clad in his wrestling trunks. There's some interesting detail representing his stripes, even on his tail. Notice the knee pads with paw prints on them- a very cool detail. I like the pose as well; it's got some character to it as his fists are raised, but he's still posed rather neutrally which is good for display. Sheldon Sabre stands up great on his own, so no worries about him falling over. 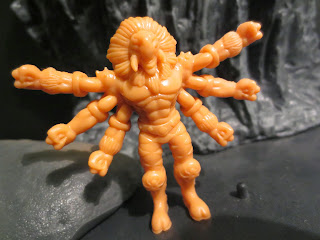 Widowmaker- This guy is just amazing. A six armed spider warrior, Widowmaker is also really, really built. Look at those abs! Each of those six arms has a mixture of smooth, spiky, and hairy surfaces. The face is really creepy; he's got a wicked little grin with fangs poking out from the sides, all surrounded by a truly epic mane. He's clad in cool boots and pants and some elbow pads and knee pads with a spider logo on them. I'm really liking the way that many of the wrestlers have themed pads. Such a cool little extra. Widowmaker is also in a very neutral pose which is honestly what I prefer with most minifigures. He stands great on his own and just looked wicked. 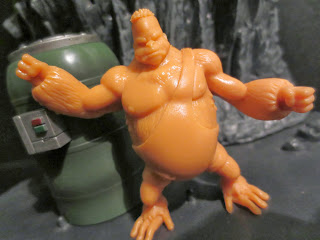 Kayin Kungaa- Here's the real winner here: Kayin Kungaa! This guy reminds me of equal parts King Hippo from Punchout, King Kong Bundy, and Donkey Kong; he's massive, mean, and menacing! He stands quite a bit taller than everyone else which is just amazing. He's big, round, and hairy with some giant fists and a really mean head sculpt. It's shaped like an eggplant with a nasty scowl and a cool tuft of hair on the top of his head. This guy probably makes the other wrestlers just piss in their trunks! The only complaint I have about Kayin Kungaa is that he has a tendency to fall over backwards. You'll have to play with his feet a bit in order to get him to stand more securely, but a little jostle sends him tumbling down. Still, this guy is wicked fun to play with! 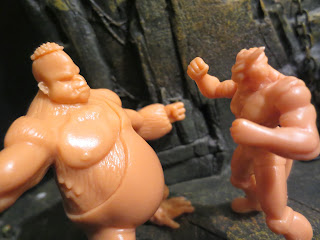 On all of the figures here I am impressed by the crispness of the detail. These figures look really good, even the smaller details and textures. The color's not bad, although I wish it were a little more pink to be closer to M.U.S.C.L.E. and OMFG (well, at least Series 1 and 3). Still, this is a fantastic set of figures with a lot of creativity in them. At $3 each these guys are super affordable. I'd love to see some of the former figures rereleased in different colors as the fact that these guys are so affordable now means that fans are more likely to not just snap these guys up, but to snap them up in droves. I'd love to have a bucket of these guys sitting around my house! Considering the price, sculpt, color, and design of these, I'm giving them a Great. I really like them and am quite eager to expand my roster of Mystical Warriors of the Ring. Let's hope this line extends into the far future and delivers us a plethora of different fighters. 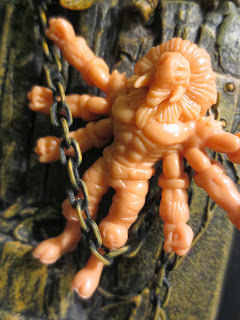 Want a set of these? Hurry, hurry, hurry over to True Cast Studio Store! At $9 for a 3-pack, these things are really a steal. 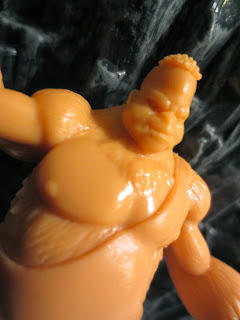