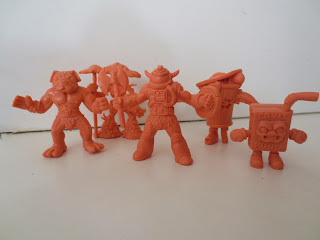 Wow! OMFG! (Outlandish Mini Figure Guys) series 3 has just arrived! Most toy fans should be familiar with October Toys' crowdsourced minifigure line by this point but if you're not here's the scoop: Each OMFG series of five figures is voted on by members of the October Toys forums from hundreds of sketches and sculpts submitted by community members. Once voted on the line is crowdsourced through Kickstarter and within a few short months backers get a cool set of five figures in the mail. I just got my set on Monday and am really excited by this batch. Ready for a look at these five little fiends? Then join me after the break...

If you've ever held a M.U.S.C.L.E., a SLUG Zombie, or a Monster in My Pocket, you should know what to expect: these guys are about 1 3/4 inch (give or take depending on the characters) solid plastic unarticulated minifigures. They're all the same shade of pink (like M.U.S.C.L.E.s) but are available in different colors from different sources. They come packaged together in a very cool little blister pack that's very evocative of 1980's styled packaging. For this review, I'll be looking at each figure individual. Let's start with.... 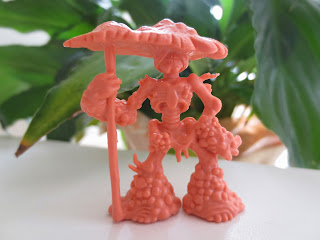 Dr. Decay is an interesting figure that appears to be a rotting skeleton covered with various bits of growing plant matter and a mushroom cap growing on his head. The details of his skeletal body such as the ribs and spine are all visible, but the weird bulbous blobs of un known growth cover his legs and arms. Two large globs of grossness cover his feet and help him to stand. He's holding a staff or stem in his right hand that extends up to the mushroom like growth that covers his head. The cap covers his eyes and most of his face, leaving only his chin and skeletal teeth exposed. I'm really curious what the artists' intention and thought behind this character was, as he's really unique and seems like he has the potential to be a great character. 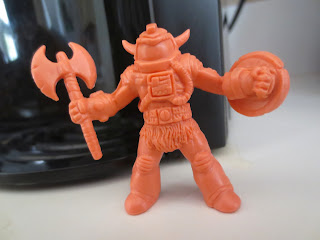 Here's my favorite figure in series 3, hands down: Barbarianaut. A perfect blend between a barbarian and an astronaut, Barbarianaut looks like he easily could have been a character in the vintage Masters of the Universe line. Actually, he reminds me quite a bit of the Castle Grayskull astronaut armor. While he's dressed in a space suit complete with a life support system and a domed helmet, he's also wearing furry briefs. I love the pointy barbarian horns on his helmet. The pose is great as his arms are extended wielding a double bladed axe and a spiked shield, making him look ready for action. Loads of detail, a cool concept, and an excellent pose would definitely have made this guy the main hero in most of my minifigure adventures as a kid. 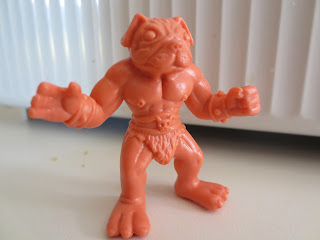 Pugnacious by Bill MacKay & George Gaspar      I think Pugnacious looks like the most classic and M.U.S.C.L.E. inspired figure in series 3. He's essentially an anthropomorphic dog in furry briefs and armored wrist cuffs. He's a pug with a silly, flat pug face, three toes on each foot, and a curly little tail poking out from the back of his shorts. There are some cool details on this figure including the skull shaped belt buckle. There's also the weird detail that Pugnacious has nipple rings. Must be a pug trait or something. He's not the most exciting figure in the set, but he's fun in a very classic sort of way. 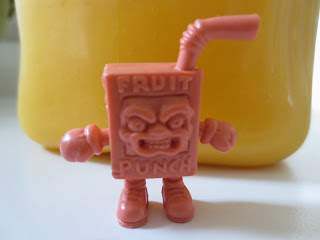 Fruit Punch is probably my favorite concept in this set: a feisty little juice box wearing boxing gloves. He's a tiny guy but looks like he has an attitude to make up for it. His limbs and face look like they've ripped out of the juice box (which is emblazoned with "Fruit Punch" on the front and "OMFG" on the back. He's got a straw extending from the top of the box and a crazy face. Seriously, this guy looks mean and slightly deranged. Actually, make that highly deranged. He's tons of fun and easily my second favorite figure in the set. 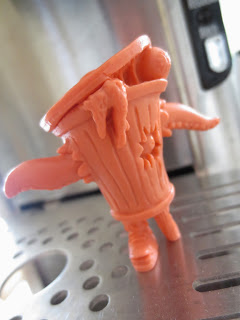 This guy reminds me more of a Garbage Pail Kids or Monster in My Pocket figure as he's a trash can with tentacles and eyeballs breaking through the side of the can. The trash can is nicely sculpted and has an opened lid with and eyeball and lots of undisclosed slime oozing out. Nasty! The slimy sucker covered tentacles are exploding from the sides of the can and you can even see the torn metal. There is another eye peeking through a hole on the front of the can. My only issue with TenCan is that he can easily be tipped over as he's standing on an old shoe and a peg leg, both plunging out the bottom of the can. 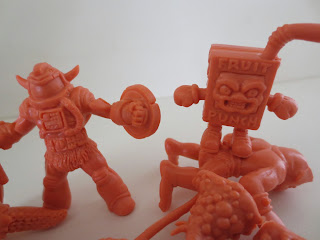 I love minifigures and always look forward to the newest series of OMFG! I really hope this series lasts for quite sometime as they're just too much fun. For me, from favorite to least favorite I'd rank these: Barbarianaut, Fruit Punch, TenCan, Dr. Decay, and Pugnacious. All of the figures are good, though, and the color of the plastic is much improved from Series 2. Any fan of minifigures would do well to add these to their collection. Whether you're using them as toys or mini art pieces, they're worthy it. As a series, I'm giving these guys a Great. Really nice set with two of my favorite minis ever!

These were available through Kickstarter, but keep your eyes on October Toys for possible releases and other cool minis!