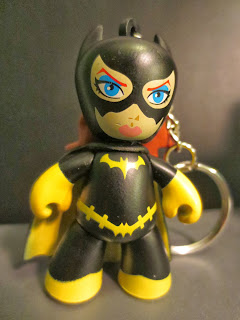 It's been a while since I've reviewed anything Batgirl related, but it seems that I won't be able to say that for quite some time as there is a wealth of new Batgirl merchandise hitting. Today I'm looking at one of the smaller new items I've picked up: a Batgirl Mez-itz styled key chain from Mezco toys. Need to easily find your keys wherever you go or want to sport your undying fandom to the Dominoed Daredoll? The perhaps this is the right product for you! More details after the break... 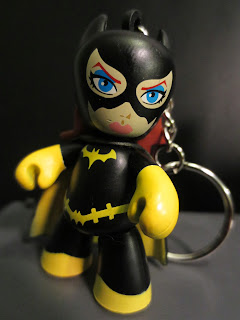 Batgirl is about 2 1/8 inches tall and is sculpted in the stylized Mez-itz vinyl style. I actually have a few of the Hellboy Mez-itz, but that's probably about it. Still, if you've seen Mighty Muggs, Mez-itz, or any other stylized vinyl toy, you know what to expect. The key ring is a fully functional metal key ring, which I'm going to assume you're familiar with. 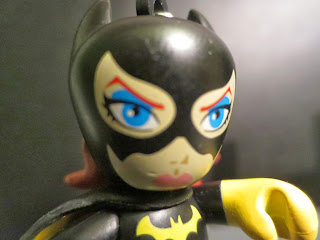 Surprisingly, Batgirl is articulated. She features swivel hips, swivel shoulders, and a swivel neck. The plastic loop that holds the metal chain also swivels to help prevent breakage. While I doubt anyone is going to add this to their action figure collection, it is nice that she has a bit of movement to her. The sculpt is pretty basic although that's actually part of the charm of vinyl figures like this. Most of the detail is accomplished through the paint which is pretty nice and clean. The tampographic stamps on the belt, chest, and face look great and give Barbara a very determined look. She looks like she's in a real "don't mess with me" kind of mood right now. Jinkies! Some details are accomplished through special pieces, however, such as Batgirl's cape and her cowl with bat ears. The cape is soft rubber and the cowl features her flowing red hair sticking out from the back. The cape is painted yellow on the inside although the edges look a little rough. Yellow's a tough color to nail, especially over black plastic. 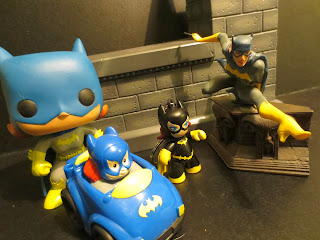 This is a pretty fun little key chain. It's nothing too special, but it's a great way to sport a miniature articulated Batgirl with you wherever you go. The parts chosen look nice and it seems fully functional so no complaints there. My only complaint is that some of the yellow paint is a bit uneven or not heavy enough to cover the black plastic. Overall, I give it a Good and a 1/2. Batgirl fans will probably want to track it down, but others may want to look elsewhere for something else.


I ordered mine through Big Bad Toy Store and you can your order yours there, too!