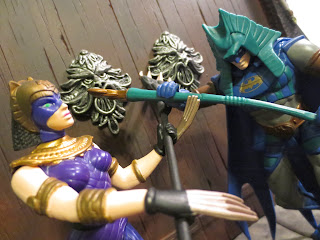 Well, I'm a little closer to my goal of completing Kenner's Legends of Batman line now that I've added this Egyptian Batman vs. Egyptian Catwoman set to my collection. Since Legends of Batman utilized an Elseworlds theme to give us multiple versions of Batman across time, wouldn't it have been cool if they would have tried to work King Tut in here? Not King Tut, the Pharaoh of Egypt, but King Tut, the villain from the 1966 TV series played by Victor Buono. Anyways, is this much more to say about this almost 20 year old toyline or can we get right into looking at the toys? Let's do that, right after the break... 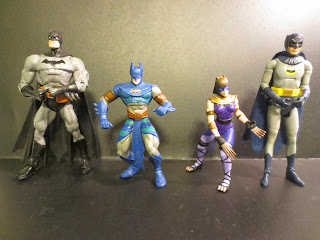 Like most of the other Legends of Batman figures, these two stand between 5 inches (Catwoman) and 5 1/4 inches (Batman). They're really solid with bulkier, more comic inspired proportions and some extreme posing to them. While I don't recall either Batman or Catwoman ever dressing like this (not even here) the style looks quite similar to the 90's comics like Legends of the Dark Knight. 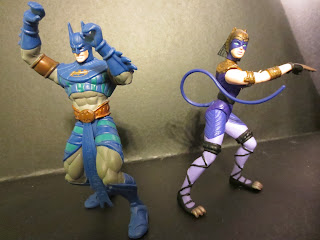 Would you be surprised if I told you that each of these figures was articulated at the big 5? Of course not! Both feature swivel hips, swivel shoulders, and a swivel neck. Catwoman also has a swivel tail, which is a nice addition. These two are very heavily preposed, however, so keep that in mind. They also don't like to stay standing. They really seem designed to be put next to each other as if they're fighting. By leaning together, they can help keep each other standing. The articulation is tight and sturdy, but do to the way the figures are preposed there aren't too many alternate poses you can put them in. 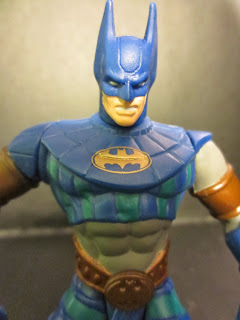 I'd say the strength of these figures is in the sculpt as both of them feature some really nice detail that puts the sets Egyptian motif to good use. Batman's wearing a really detailed outfit that's a lot better than many of the other figures in the line where it simply looks like period specific armor over a standard Batsuit. The armor patterns and textures on the boots, gauntlets, and such are just impressive and capture a (probably inaccurate) Egyptian look. I particularly like his Bat engraved belt and hanging loincloth that's covered with hieroglyphics. Catwoman also looks great; clad in a sleeveless purple outfit with a gold headpiece (there's a little cat hieroglyphic on it) and some wicked claws on her hands and feet, she looks to not just walk like an Egyptian, but also to fight like Wolverine. The straps holding her sandals on are a nice touch. 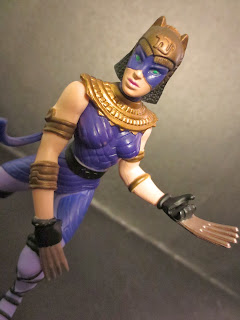 The paint work is good as well. It's neat, clean, and very colorful. Catwoman has two shades of purple as well as a few shades of gold and copper for her adornments. Batman's clad in grey and blue with some green and gold highlights as well as a gold Batsymbol on his chest. Both figures look really good and do stand out on the shelf. 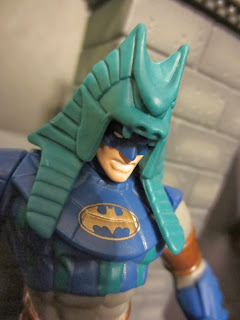 The set comes with a nice amount of accessories, too, and none of them are giant missile launching Sphinxes or anything. Batman features a removable cape (it has a ribbed texture to it), a bat styled headdress, and a scepter with a bat on the end. The headdress is really neat and fits tightly on Batman's head while the scepter can be held in both hands, although somewhat awkwardly. I like that the Batsymbol shaped headpiece is painted bronze, making it feel more royal and also more weapon-like. Catwoman has blades permanently sculpted on her hands, but also comes with a long catlike headdress (not as cool as Batman's) and a long staff with a cat's paw on the end. The claws of the paw are painted to look metal and the staff fits tightly in both hands. Batman has a belt buckle piece that is removable, although I'm not sure it's really intended to be. Still, these two figures are nicely loaded with fun stuff to play around with. 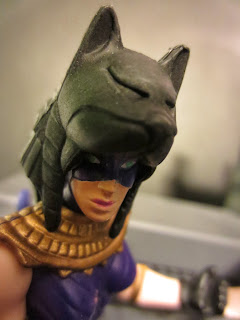 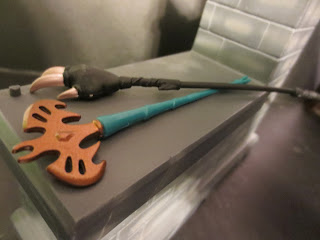 There are some really strong aspects to this set: great sculpting, good accessories, and vibrant, eye catching paintwork. There's also the weird issue that both figures feature very preposed stances that don't allow them to stand too well on their own. That's always a bummer to me. Still, considering when these two were released and that they were very much intended to be toys, I'm content giving them a Good and a 1/2t. They're really quite nice and the characters chosen fit the two-pack's theme well. I'm really happy with them and they're definitely a unique addition to any Batman or Catwoman collection. 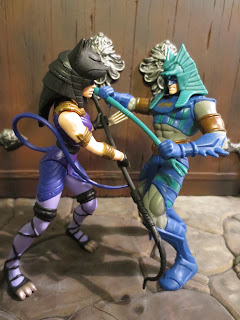