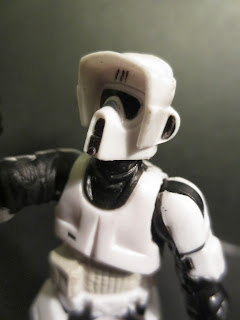 It's tough to decide which Imperial Troopers have the coolest outfits, but I'm always willing to throw Scout Troopers/ Biker Scouts into the running. I've always liked these guys and just recently realized that the most recent Biker Scout I owned was the POTF II version that came with the Speeder Bike. You know, the one from 1996 that looked like he was riding a horse. Yup. I decided it was time to add an updated version to my ranks, so here it is. This guy's part of the first series of the 1/18th scale Star Wars Black line and is mostly a repack of the 2012 Toys 'R Us exclusive Biker Scout with Speeder Bike set, so if you have that you pretty much this figure, too. Still, I didn't have that set so this guy's all new to me. More Biker Scout goodness after the break.... 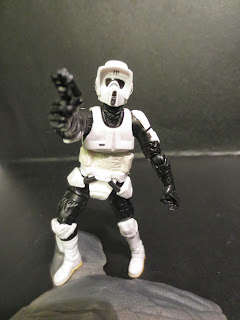 The Biker Scout is 3 7/8 inches tall and is sculpted in the realistic style of most Star Wars figures (not an animated appearance like the Clone Wars stuff). Not much more to say about the style, although I will say something about the new packaging. Be careful ordering these guys offline if you're concerned keeping them mint on card: lots of the Black series figures tend to have blisters falling off the backer cards. I actually got mine cheaper due to that, but if you're a stickler for packaging make sure you order from a collector friendly store like Big Bad Toy Store or something so that you get a decent figure. 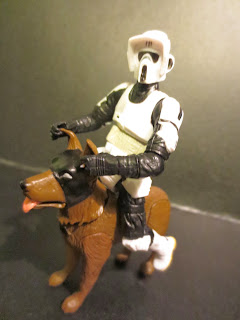 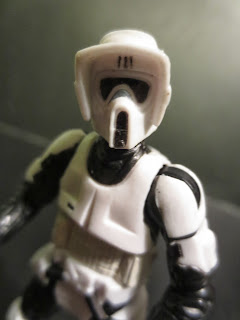 I've always liked the lightly armored and more mobile armor of the Biker Scouts and this is one of the best representations of the character yet. All of the individual plates of armor are nicely detailed with angular lines and the torso armor features lots of extras such as pouches. The helmet might be a bit off from the film design, but it's pretty close and probably only off due to factory or mold error. 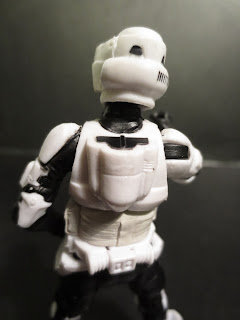 White armor, black details, and a black bodysuit; is there much else you could want? Most of the paint is neat and clean (the shoulders are kind of messy) but one thing that initially surprised me was the way that the armor/ pouches on the stomach are almost a grayish white. At first I thought this was an error but the more I looked at stills of the troopers in Return of the Jedi, the more I realized this seems to be pretty accurate. That's definitely a softer material than the standard armor and does look to be more like a padded material. Nice detail that I don't know that I'd ever paid much attention to before. 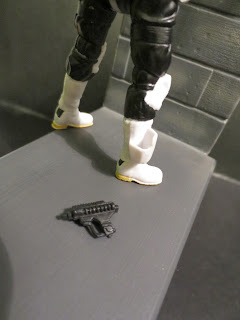 Typically these guys come packaged with Speeder Bikes but this guy doesn't. He does, however, come with his small holdout blaster that the Scout Troopers wear in a holster on their right ankle. The detailed little pistol fits nicely in either the scout's right hand for shooting or in his holster for riding. I wish he came with a rifle of some kind as well (since many Scout Troopers were excellent snipers) but no dice. 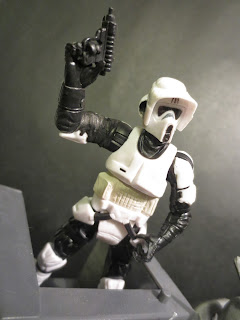 This is a pretty neat little figure. My guess is that most hardcore Star Wars collectors probably have a ton of these guys already but if not, here's your chance. He's a drastic improvement over my POTF II Biker Scout and my yellowed vintage Biker Scout so I'm glad to have him in my ranks. For some reason I just enjoy playing around and posing the various trooper figures and this guy is a nice addition to my ranks. Just be careful if you store this guy around any Ewoks. Those guys hate him. I'm giving him a Great- he's simple but he gets the job done.

If you're interested in building your own squad of Biker Scouts, head on over to Big Bad Toy Store and add to your ranks today.