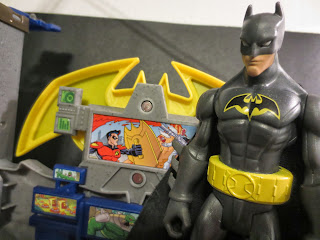 Every now and then I buy something just on a whim. I was at Big Lots on Saturday and saw the Blast and Battle Batcave from Mattel's Power Attack Batman line on sale for $15. I said to myself, "What the heck?" At the very least I could use it for a backdrop when taking pictures for reviews. It's a pretty decently sized item and came with a Batman action figure. While the line seems to be ending in favor of Mattel's new DC Total Heroes, the Power Attack Batman line has been Mattel's evergreen Batman line for about the past year and a half. It's definitely designed for kids and features a very stylized look, but for this set I figured "How often do you get to buy a Batcave?" Batcaves have always been some of the most prominent and best playsets available, which is interesting because rarely does much combat occur in the Batcave (part of the reason why Kenner's six paneled Batcave playset is one of the best playsets ever). Still, Batcaves are awesome in general, so I paid my cash plus tax to the cashier and left Big Lots with the Blast and Battle Batcave. How is it? Read on and find out, chum! 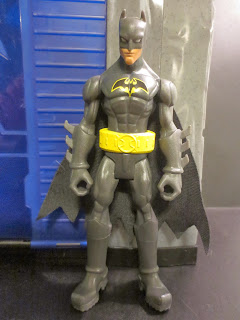 First, I'll talk briefly about the Batman figure that is included with the set. The Power Attack Batman line has a stylized appearance with exaggerated proportions such as larger feet and hands and tiny heads. It's not ideal but I'm OK with it. What's nice is that this is a pretty standard Batman; he's gray (and a wee bit sparkly) with a yellow utility belt and a cloth cape. I know some folks hate cloth capes but I really prefer them on the majority of my Batman figures. The logo on his chest is a neatly applied tampographic stamp that looks kind of like the newer Batman & Robin Batsymbol. This figure only has five points of articulation: swivel hips, swivel shoulders, and a swivel head, which is a bit less than the average figure in the line (they also tend to have hinged elbows). He's nothing special and more of an extra so kids can get right to playing with the Batcave. 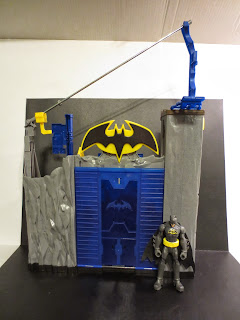 Let's start our tour of the Batcave. The front side of the cave is pretty much a stone wall with a large translucent blue door on it. The sculpt is nice on the cave wall and there is a giant Batsymbol on top. 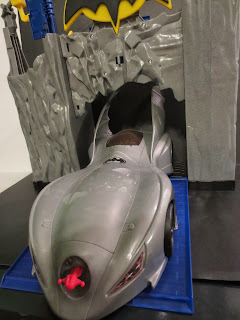 The large blue door folds down and turns into a ramp to allow the Batmobile to enter into the cave. Maybe it's intended to represent the holographic projection that masks the Batmobile's entrance into the Batcave? There's not really any garage space or anything inside of the Batcave so you'll pretty much just have to make your own. As a kid I'd string multiple playsets together to accomplish my goals, so I imagine modern tykes o the same, no? 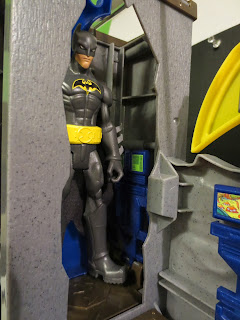 Once you flip the playset around there are a few different areas that will draw your attention. On the left side is an elevator housing with a working elevator that allows you to move a small elevator from the ground floor up to the middle top floor and to the top of the elevator. It's a brownish colored elevator with a bat logo in the middle of the floor. There's a yellow Batsymbol shaped handle that lets you movie the elevator allows it to catch on each floor. 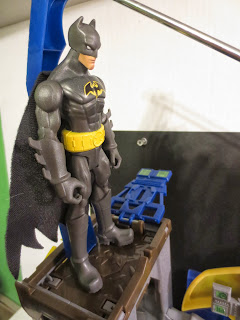 When you get to the top of the elevator shaft, two things happen. First, a panel on the side of the elevator falls down and creates a platform which a figure can stand on. Second, a large blue column on the elevator will catch an actual metal rod that extends across the playset. 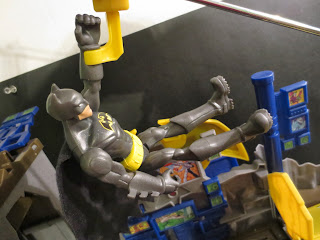 There's a yellow trolley that can clip onto Batman's wrist, allowing him to zip-line across the playset onto the top floor. 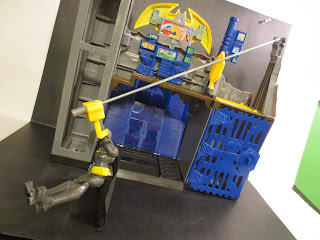 The other side of the zip-line can then pivot, allowing Batman to zip-line down to the ground. It's a neat idea, but it just doesn't work very well. The pole's not long enough and Batman either tends to get stuck on his computer terminal or falls off. 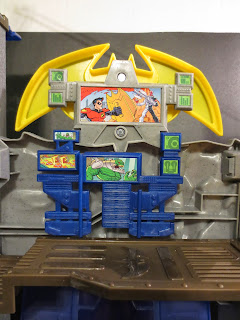 The top floor is pretty basic in that it's simply a walkway with a computer bank on it. The computer bank is a relief that's connected to the wall and features a bunch of computer screens showing different images from various pieces of package art (via simple stickers). There are six random screens of data and gauges, a scene of Robin fighting Two-Face, two images of Killer Croc, and one screen of three eyed little creatures climbing out of a toxic waste dump. What the heck is that all about? 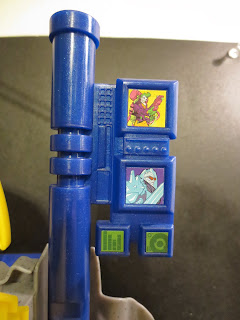 There's a second tower of computers with two more gibberish screens, an image of Mr. Freeze, and an image of the Joker. 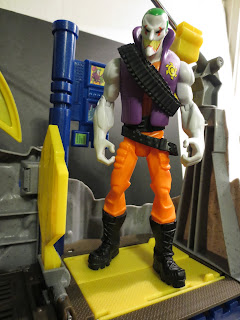 There's also a trap door up here. It's bright yellow and is activated by pushing a large yellow panel that is supposed to be able to be activated by Batman kicking it as he slides down the zip-line. The panel works, but it's tough to get Batman to kick it from the zip-line. 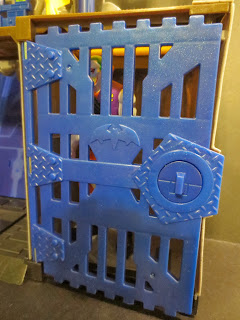 It drops villains who may have broken into the Batcave down into a jail cell on the right side of the cave. The jail cell door can open and close. 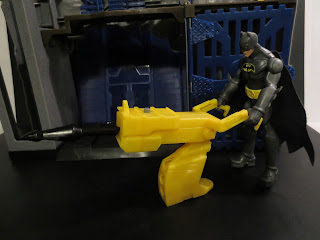 Last (and probably least) is a large missile launcher. It's bright yellow, minimally detailed, and only comes with one missile (although there are spots to store three missiles on it). It does fire pretty the missile pretty far, though. 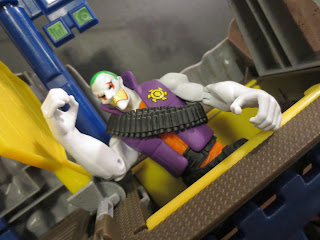 I'm a big fan of playsets, both vintage playsets and newer playsets (I love Imaginext stuff). This isn't the worst playset I've ever seen, but it's not good. I do think it also might be the most boring Batcave ever made. The plastic is kind of like something you'd see on some Imaginext products, but it feels a bit flimsier. There's also just not a lot of space to play or stuff to interact with. It definitely seems like it was designed to be visually appealing but inexpensive for buyers but with little actual substance. Overall, I'm giving this an Eh and a 1/2. I'll definitely find some uses for it in taking pictures but unless you collect Batcaves (which would be awesome) I'd say skip it. I'm sure kids would have fun with it, but Batman collectors probably won't be impressed. 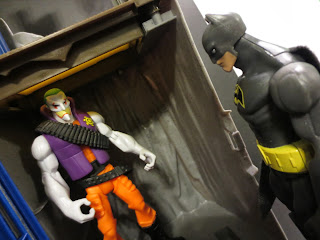 If you are a collector of Batcaves, you can snap this up at Big Bad Toy Store today!

I've reviewed two other figures from the Batman: Power Attack line:
"Attack in the Box" The Joker
"Dual Destruction" Two-Face