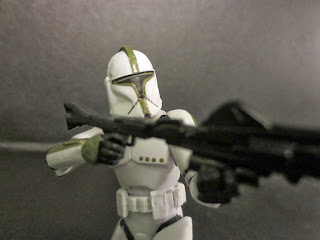 While all of the attention lately has been on Hasbro's 6-inch Star Wars Black, Hasbro has put out a few cool figures in the traditional smaller scale. While I'm not planning on picking up too many of the 1/18th scale figures, I do have a fondness for troop builders in that scale and have continued to snatch up troopers and clones. Today I'm looking at the Clone Trooper Sergeant from the first series of 1/18th (or 3 3/4 in.) Star Wars Black figures. These are the guys wearing green stripes on their armor who command squads of nine clone troopers. Ready for a look at this guy? Then jump right in after the break. Just don't call him sir- he works for a living! 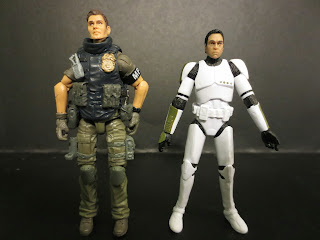 With his helmet on, the Clone Trooper Sergeant is closer to 3 7/8 inches; that makes sense since his armor and helmet add a bit of bulk. Like the majority of Star Wars figures in the smaller scale, the sergeant is sculpted in such a way as to fit in with the standard movie based figures (rather than figures based off of the animated series). 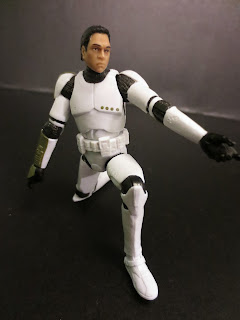 This guy is really well articulated! While Marvel Universe and G.I. Joe figures typically have standardized articulation, that hasn't necessarily been the case with Star Wars figures over the past few years. While there have been ball joints present, they haven't been completely standard. This guy has them, though, and they work great. He features: ball jointed ankles, ball jointed knees, ball jointed hips, a ball jointed abdomen, ball jointed shoulders, ball jointed elbows, ball jointed wrists, and a true ball jointed head. The range of motion is quite impressive. The sergeant can hold a great crouching position and hold either of his two weapons with both hands. Superb and very, very durable. 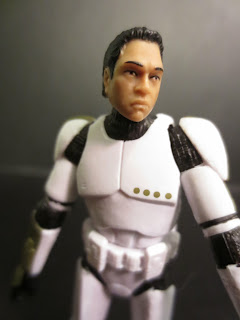 The Clone Trooper Sergeant's Phase I armor is nicely rendered here and looks extremely accurate to most images of the character I could find. Each piece of armor looks to be an individual piece and has a nice, flat finish. Detailed parts of the armor like the chest piece, the utility belt, and the panel on the back look fantastic. There's even a communications panel on the right wrist. The headsculpt underneath the removable helmet isn't bad, either, and certainly bears a strong resemblance to Temuera Morrison. He's an impressive figure, especially at a small scale. 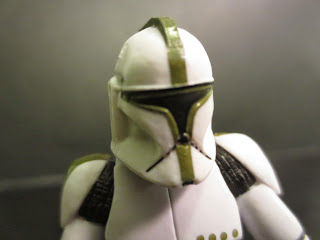 The paint's pretty good as well. While most of the figure is molded in white to replicate the standard Clone armor (which appears very colorful to Kaminoans since they can see in the Ultra-violet spectrum) details like the black bodysuit and the olive green stripes on the armor are nicely applied. Even the head is painted convincingly, something that is just impressive when looking at such a small figure. 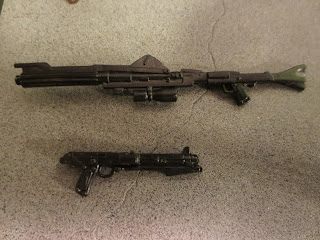 The Clone Trooper Sergeant comes with three accessories: his helmet, a DC-15A blaster rifle, and a DC-15S blaster carbine. The helmet looks great and fits perfectly on sarge's head; no rubbing or anything! Both of the blasters are made from a nice sturdy plastic and can fit in either (or both) hands for plenty of blasting action. The triggers fingers fit perfectly in the trigger guards! While this guy doesn't come with as much stuff as your average G.I. Joe, this is a pretty nice accessory complement for a Star Wars figure. 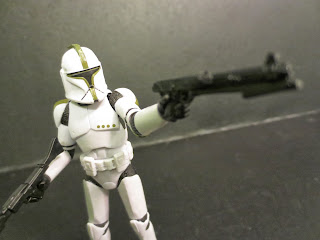 This is a really good figure. I can't say it's a figure that exciting in the way that expanded universe or never before released characters are, but it's a really good figure. I know there have been a few releases of the Clone Trooper Sergeant before, but this is probably the best. The first series of Star Wars Black figures in the smaller scale were originally intended to be released in another Droid Factory series that was canceled, but that means that this guy is now just a bit easier to army build if you need some sergeants to lead the rest of your clones. I think this guy is easily a Great figure, so that's the grade I'm giving him. While these retailed for around $10, they seem to be getting harder to find and since the second series of the 1/18th Star Wars Black figures is  starting to hit, you might need to snag him sooner rather than later.

If you're pulling your hair out looking for this guy, why not snap him up from Big Bad Toy Store?