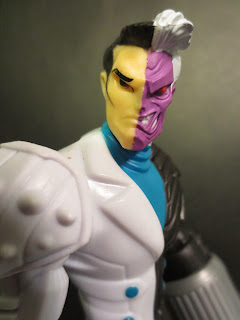 There is just too much Batman stuff out there for any normal collector to collect it all. To help me out, I've created a priority list to help me determine what I buy:

Tier One: Batgirl stuff- Figures, busts, autographs, etc. If it's based on Barbara Gordon as Batgirl (or Oracle) I'm on it like white on rice.

Tier Two: Batman, Villians, or Bat-Family members in the 6-7 inch scales: Basically any Batman figure, villains or other Gothamites from DC Collectibles, DC Direct, or Mattel.

Tier Three: Villains in any scale- This can be Batman: The Animated Series figures, Infinite Heroes, or older movie figures. I'm sort of picky with these and the more unique the villain is, the more likely I am to hunt them down.

Today I'm looking at the Dual Destruction Two-Face from the Batman: Power Attack line by Mattel. These are the current (well, they seem to be being phased out) evergreen Batman line that are targeted more towards kids than collectors. He's a Tier Three buy for me, which is why I only picked him up in a bargain bin for $2.99 at the Great Escape in Madison, Tennessee (shout out!). He's a pretty cool version of Two-Face and I like him a lot more than the previous Power Attack figure I reviewed, Attack in the Box Joker. Ready for a closer look? Let's do it! 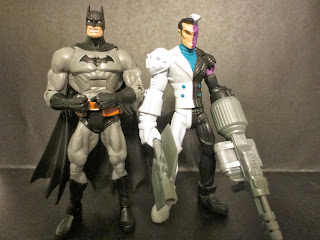 Considering that he's almost 6 1/2 inches tall, Two-Face wouldn't look out of place scale wise next to other Batman figures from Mattel but the style is quite different. These figures have slightly stylized proportions which consist of larger hands and feet with slimmer limbs. The style's very animated as well, almost as if these were based off of a Batman cartoon that never aired. I'm not sure how I'll fit them into my collection yet, but I'm working on it. 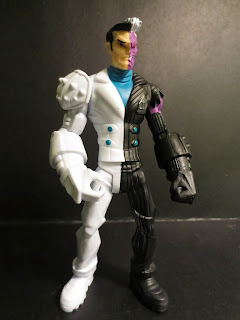 The articulation is designed for simple play and to keep these figures sturdy, so you'll notice ball joints and excess hinges are out. Two-Face features: swivel hips, a swivel waist, swivel shoulders, hinged elbows, and a swivel neck. You're not going to get any really dynamic or nuanced poses out of this guy, but he sure is fun in a nostalgic sort of way. Knee hinges would have been nice, and possibly swivel wrists as well, but I imagine Mattel was trying to keep cost down. 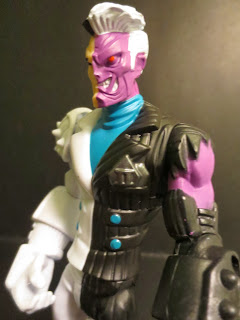 One of the nicest things about this figure is that he has a unique sculpt. Unlike many DCUC figures, Harvey here doesn't seem like he shares parts with other figures which means the bisected nature of his appearance vividly reflects the bisected nature of his psyche! He's wearing a snazzy suit and a turtleneck, which looks quite dashing. The "Harvey Dent" half is a normal flat suit with an armored gauntlet and a spiked shoulder pauldron. The "Two-Face" half is sculpted with pinstripes in the suit, a spiked wrist guard, and a rip in his sleeve. It's nice work and the headsculpt really seals the deal. It's a bit caricatured, but very nicely captures the split face of Two-Face; the monstrous side's wild hair and exposed mouth is sure to induce nightmares in smaller children, which I believe is the hallmark of a great toy. 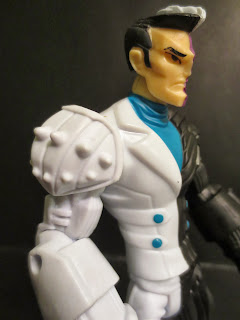 The paint job is pretty simple, but very neat and clean. The arms and legs are simply molded in either white or black plastic but the chest features painted buttons (a nice teal that matches his sweater), and a paint app to show his purple flesh through the ripped sleeve. The face is neat and clean with good work on the eyes, teeth, and shreds of skin hanging off of his lips. I like the black and white look for Two-Face's outfit as it brings to mind his look in Batman: The Animated series, probably the first place I was introduced to Two-Face. 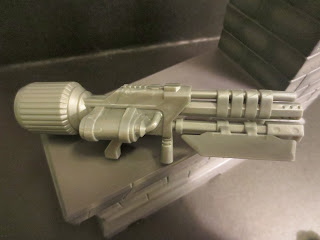 The standard rule for these guys is that they come with gigantic accessories to impress the kiddies. Some of them are actually kind of neat while some are pretty lame. Harvey's falls on the cool side of things as it's fairly large gun with a removable axe. Yes, it's crazy, but I have to love it on principle. Molded in silver plastic (aren't you glad it's not neon pink or something?) this thing looks like something Two-Face might actually carry. It's got two cylinders on the side which actually makes me think it's supposed to be a flame-thrower. Roasty toasty. 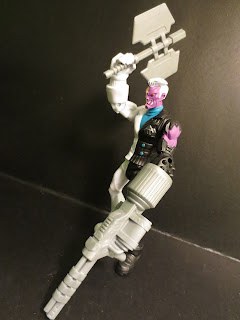 A double bladed axe pulls out from the bottom and can be wielded by Two-Face, which is a nice choice of a melee weapon for him. I can see him appreciating both the dual nature of the weapons and it's theatricality in terrifying his victims. The axe is made from a nice solid plastic while the gun is a wee bit rubbery. The biggest problem is with the handles which are hard to get into his hands. It seems, however, that Mattel intended for you to use the giant hole on the rear of the gun and slide it over Harvey's wrist. Whatevs- it's up to you how to make him hold his weapon. 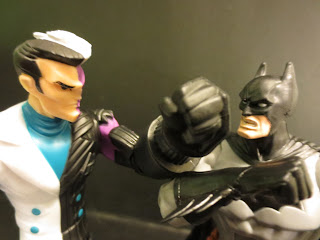 This guy is really pretty cool. I was pretty lukewarm on Joker and none of the other figures have really grabbed me, but this guy is fantastic. I'm giving him a Great. Compared with other figures in the line, I think this guy is at the top of the heap. Honestly, he's one of my favorite Two-Face figures I own. I'll probably try to work him into my regular 6-7 inch collection just because he's so cool. Plus, he has a flamethrower with a removable axe blade. Those are always a good idea. Always. 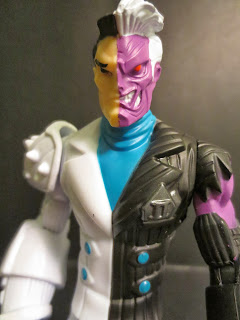 Big Bad Toy Store has a lot of Power Attack Batman stuff in stock but unfortunately no Dual Destruction Two-Face for sale. You'll have to shop around. Who knows? Maybe you'll even find him at regular retail?