Action Figure Review: Geldor from Masters of the Universe Classics by Mattel 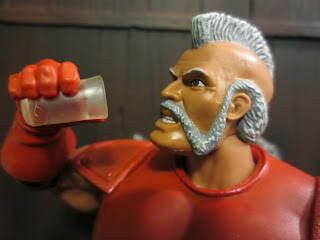 Last year Mattel offered subscribers a chance to vote on a figure that would appear in the 2013 subscription. The options were Crash Landing Marlena, Cloak & Dagger Evil-Lyn, "Mini-Comic" Trap-Jaw, Illumina, Songster, Camo Kobra Khan, Green Demon, and Geldor. While I was pulling for Illumina (who ended up in second place), Geldor won the poll and thus he's the figure I'm reviewing today. Appearing in the mini-comic The Secret Liquid of Life, Geldor is a villain searching for the titular liquid that will grant him eternal life. He's a rough, tough, barbarian looking gent that's ready to cause trouble just for a drink of water. Ready for a look at this guy? I am- while I'm still bitter about Illumina's loss, I am a fan of the more straight up barbarian characters in the line and this guy would look right at home fighting He-Man, Vikor, Vykron, and King Grayskull. Join me after the break.... 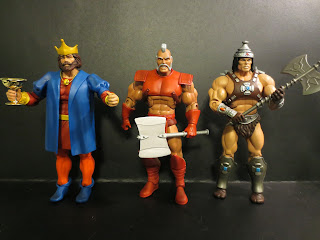 At first I was going to comment that Geldor seems really short, measuring in at only 4 3/4 inches but then I realized I was holding the ruler the wrong way; he's actually 7 inches tall, just like everyone else in the line (7 1/4 with his mohawk factored in). He looks great and really matches the Masters of the Universe Classics aesthetic. While the base body, thighs, and arms are all reused from previous figures, Geldor does feature a new head, chest armor, loin cloth, and boots. Some fans have complained that he's a bit plain and while I'm inclined to slightly agree, it's not really due to a lack of new parts. 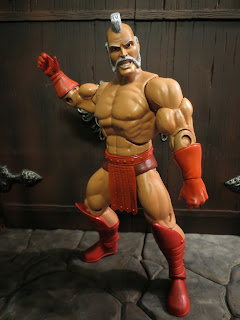 You've got to give it to Geldor, though, the guy is well articulated and a solid figure with no QC issues. He features: hinged ankles w/ minor lateral motion, swivel boots, hinged knees, swivel thighs, swivel/hinge hips, a swivel waist, an abdominal hinge, swivel/ hinge shoulders, swivel biceps, hinged elbows, swivel wrists, and a double ball jointed head. I've actually bee calling the MOTUC heads double ball jointed because the actual head is attached to a traditional ball joint, but the ball itself is attached to a small rod or "dumbbell" that connects down inside the neck and offers some ball joint like movement there as well. Is there a more accurate term for this joint? Anyways, my only complaint is that there's no way to get Geldor to hold his axe with both hands, but that's been a difficulty with most MOTUC figures due to their bulky chests. 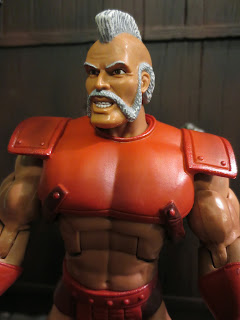 While Geldor doesn't stand out amongst the ranks of MOTU's eccentric cast, I really do appreciate the fact that he's a fairly generic barbarian (he also kind of reminds me of the Superpowers version of Steppenwolf from DCUC). He is the kind of figure that would appeal to fans of Conan and barbarian fantasy who really liked Vikor and Demo-Man. He's got some very cool gear on, particularly his leather battle armor, his Roman styled loincloth, and his funky boots with pointy kneepads. The armor and the loincloth have a mixture of nice textures (particularly on the leather strips) and lots of various rivets to show off how the armor is assembled. I like Geldor's head sculpt and would count it as one of the most interesting in the line. It's a bit different then the prototype version, however; while that one looked truly angry, the actual figure looks more like he's gleefully heading into battle. Seriously, this guy just loves to fight. The mohawk and funky beard are extremely well done and I love how his deranged smile shows off his individual teeth. Brilliant! One weird thing I did notice was that there were lots of dents and scrapes on his right bicep and shoulder. Not sure if that's a mold showing it's age or just a simple QC issue, but I figures I'd point it out. 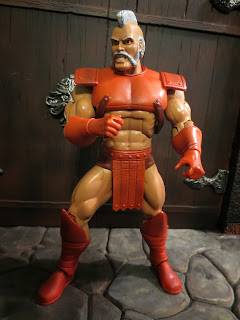 One of the things that makes Geldor seem plain is that there's not a lot of color variation on the figure. Geldor has a skin tone that's almost tan and looks good with his reddish brown armor, but based on his appearance in the comic shouldn't his flesh tone be a bit darker? There's lots of variation on his armor, however, including metallic red on the tops of his boots, belt, and edges of his armor, and a nice dark wash to bring out the full sculpt of the main parts of his armor. The head is perfect and I love the graying hair, wonderfully sparkling eyes, and teeth. The only paint issue I have is a random fleck of red paint on Geldor's right bicep. 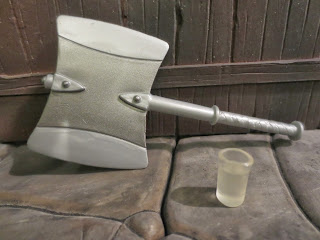 Here's where things get a little disappointing: the accessories. Geldor comes with two accessories (and his removable armor) but neither of them really appeal to me. The axe looks cool at a first glance but starts to look blunt and silly with some study. It matches the design of Geldor's axe in the comic on a surface level but lacks the sharpness of the sculpt. Some people have compared it to a snow shovel, and I can respect that. It does kind of look like something Geldor might use when he helps Uncle Buck make pancakes, doesn't it? Secondly is the secret liquid of life itself that Geldor seeks to gain immortality. It's essentially a little plastic glass of water that's too big for Geldor's hand without stretching it out. I admit, this accessory needed to come with the character, but couldn't something else cool have been added such as the shield he appears to use on the cover of the comic? Here's how I recommend you use these weapons- since Geldor is packaged with the axe in his right hand, the right hand is already stretched out a bit. Move the axe to his left hand which still has a firm grip and stretch out the right hand even further to grasp the liquid of life. 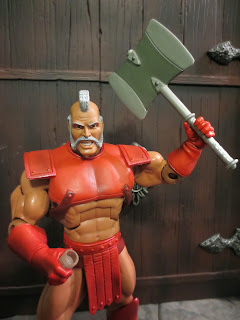 I like Geldor a bit more than I thought I would- he's got an exellent headsculpt, some very rich paint work, plenty of newly sculpted pieces, and no QC issues. He still manages to be a bit dull, though, and his accessories really don't help that much. I'm going to give Geldor a Good and a 1/2. There's nothing really wrong with him other then he just doesn't stand out in a line filled with bee warriors, crab guys, and glow in the dark skeletons. Of course, not everyone can and these more grounded guys fill a significant role in the mythos. I know lots of fans wanted this guy and I'm glad a long desired minicomic character has finally been delivered. Now, can we please, please, please get around to Illumina. She did come in second, you know. 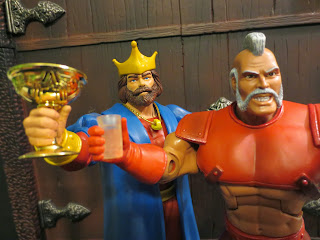 Want a Geldor of your own? Then hurry on over to Big Bad Toy Store and snatch one up today!