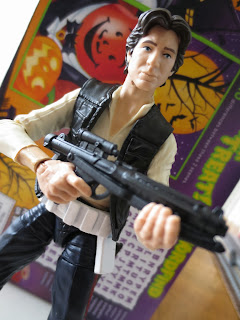 Star Wars Black series 2 has already arrived at Big Bad Toy Store and I'm thrilled to have got mine early. While I initially didn't plan on getting into the series, after having Darth Maul in hand I knew I would be pulled into collecting this line like the Millennium Falcon was pulled into the Death Star's tractor beam. Today I'm looking at Han Solo in his well known outfit from Star Wars Episode IV: A New Hope. One of the things I really like about Star Wars Black is the well thought out accessories and Han Solo delivers more than any other figure in this series. Not only does he come with his famous blaster pistol, but he also comes with extra gear so that you can give him his stolen Stormtrooper utility belt and his gunner's gloves from the Death Star escape. Honestly, if Hasbro had found a way to give him a buttoned shirt like in the Yavin throne room we'd have every variation of Han Solo from A New Hope other than the Stormtrooper disguise. The figure's really well done, although I should probably let you read the review to fins that out. Why don't you join me after the break.... 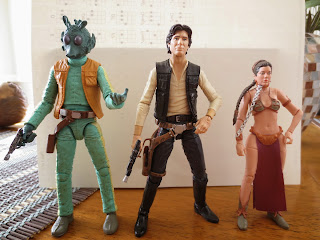 Han Solo is right around 6 inches (maybe a little taller if you count his stylish hair) which puts him nicely in scale with the other characters in the line. He's about the same size as Greedo and Boba Fett while being taller than Luke Skywalker and Princess Leia and a bit shorter than a Sandtrooper. While these aren't photorealistic like figures from NECA and Hot Toys, the likenesses are quite impressive. I'm not including pictures of the boxes in every review, but if you haven't seen them yet check out my Darth Maul review; the boxes are really well designed and collector friendly. I typically pitch boxes, but I'm keeping these to store my figures. 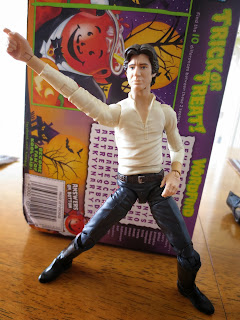 Han is extremely well articulated and more fun to play with than a barrel of Wookies. He features lateral ankle rockers, hinged ankles, double hinged knees, swivel thighs, ball jointed hips, a ball jointed abdomen, ball jointed shoulders, ball jointed elbows, ball jointed wrists, a hinged neck, and a ball jointed head. Han can hold his blaster out, draw it from his holster, hold his Stormtrooper rifle with both hands, and crouch on one knee. The quality control is really good and I have no function problems but I do have a form problem with the neck hinge. I complained about it on Luke Skywalker from series 1 but I'll mention again that the neck hinge is visible and looks kind of awkward from certain angles. It's a minor nit, but one I think does ruin the aesthetics of the figure. 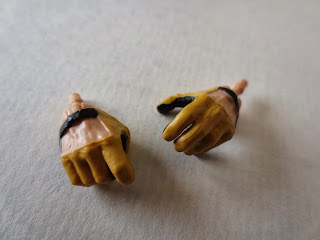 Han is the first character in the line to come with a set of alternate hands. Han comes with hands sporting the gloves which he wore while manning the turret while escaping from the Death Star. The hands are pretty easy to swap and the pegs seem pretty firm, although I'm still a little concerned about breakage. They go in pretty easy but require a bit of tugging to get them out. If you've ever had any Marvel Legends figures with alternate hands, like the Hasbro Elektra that came with Ronin, you'll have an idea of what to expect. Once again, I've had no breakage at this point, but those little pegs still make me nervous. If you're going to swap, you probably should heat the plastic around the wrist first before inserting the peg. 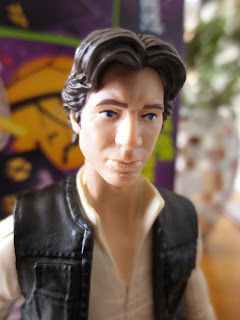 Personally I think the sculpt is about perfect. Harrison Ford has a difficult likeness to capture and this is about the best toy sculpt of him I've ever seen. I think that anyone looking at this figure even without seeing the body would still recognize Han Solo. Great hair and a nice neutral expression work perfectly for the character. Han's a simple guy wearing a simple outfit but that doesn't mean that it's not well sculpted. His vest is a removable piece with all of the appropriate pockets and his pants actually have the red side stripes sculpted on, not just painted. The boots are simple but snazzy and his regular belt is very detailed (you can see the holes in the belt). I'm really happy with how he turned out. 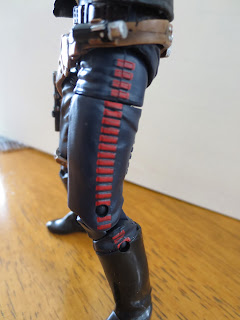 The paint's pretty good. Simple, clean applications mostly with just a little bit of slop in some pretty unnoticeable places. I'm actually pleased with how clean the figure looks- while Hasbro doesn't go for the crazy detailed paint jobs of more direct market collector targeted lines, they still do a really nice job here. Details such as some minor highlights on Han's hair and the individually painted red stripes on his pants really stand. Not bad, especially considering that Han Solo really is a mass market action figure despite the $20 price tag. 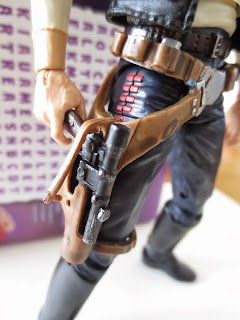 I'm really pleased with Han Solo's accessories as he comes with quite a few goodies. I covered the gloved hands above, so I won't say any more about those. Solo also comes with his belt and holster, DL-44 heavy blaster pistol, an E-11 blaster rifle, and a Stormtrooper utility belt. The DL-44 heavy blaster is Han's standard Mauser styled blaster pistol and it looks really good. Since Han's blaster was a bit unique, Hasbro didn't just reuse the same mold from Luke; it's an all new pistol with a unique paintjob. Very, very cool! I love the weathering details on this and it goes perfectly with Han's holster. His holster slides over his right leg and then buckles around his waist. It's a little tough to get on but looks great and stays nicely in place. The strap holding the pistol in place, however, it dangerously thin. In fact, it's so thin that I'm afraid of removing it as I could see stress marks forming the first time I did so. I think I'll end up enlarging the hole as the pistol does look cool on Han's side. 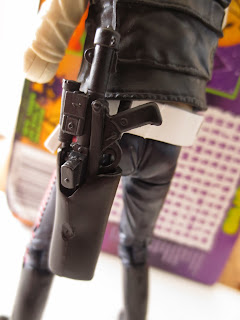 The E-11 is the same as the one that came with the Sandtrooper which makes perfect sense; it's a standard Imperial issues weapon. Han looks great with it and the weapon fits nicely in the Stormtrooper utility belt's holster. It fits perfectly around his waist and is nicely detailed with all of the appropriate compartments. Little things like this always make me excited for other figures and now I cannot wait for Luke Skywalker in his farm boy duds, hopefully with his own utility belt as well! Anyways, the snap on the utility belt has a sturdy peg so no worries here. 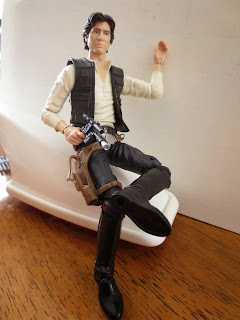 I love this figure, although a few things do leave me conflicted: the strap on the holster and the swappable hand pegs have me a bit worried. Nothing has happened yet, but I feel like it's just a matter of time before something breaks if some minor precautions aren't taken. I imagine that I'll probably enlarge the hole in the holster and just leave the basic hands on and that will take care of things. So, how do I feel now? Pretty good. Han Solo turned out much better than I believed he would. Great articulation and a really, really good likeness. I'm pretty happy with the Harrison Ford likeness. I'm also thrilled with the vast amount of accessories Hasbro gave the figure. He's one of the figures that truly feels like a deluxe figure for discerning collectors. I'm ultimately giving Han Solo a Great and a 1/2. Despite my concerns, this is still a really amazing toy. Just take a few minor precautions and you should love this figure, too! Go ahead. Tell Han you love him. It's OK. He knows. 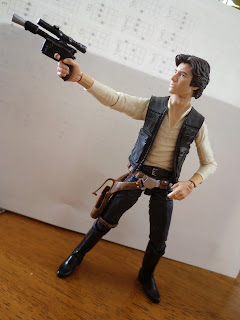 If you're interested in Han Solo, head on over to Big Bad Toy Store and pick him up today! Of course, you can also pick up the whole second series (Han, Greedo, Slave Leia, and Boba Fett) for $79.99, cheaper than retail, really! 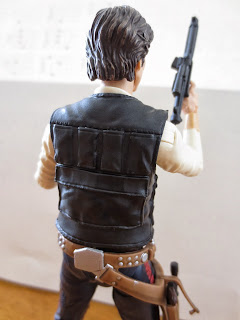 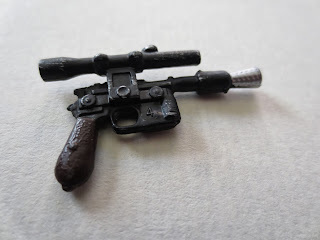 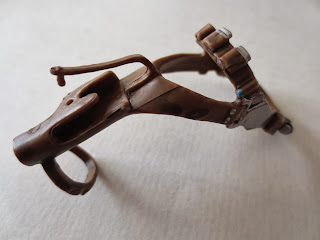