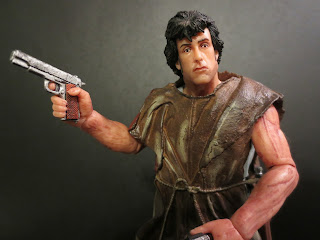 Back in June I reviewed the first Rambo figure released by NECA which portrayed Rambo as seen on the classic movie poster for First Blood and during the film's climax. Today I'm looking at the second figure in NECA's Rambo series which is called the Survival Version and represents Stallone's John J. Rambo character as he appears throughout First Blood as he is evading the Washington State Patrol and the National Guard. Decked out in his makeshift poncho and armed with the various weapons he has gathered from his pursuer or crafted himself, this guy is ready to start an all out war. Ready for a look at the Survival Version of Rambo? Then join me after the break... 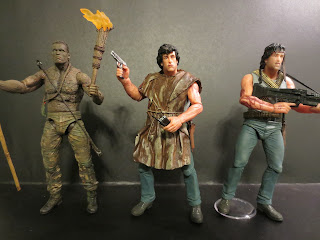 I've said before that one of the best things about all of NECA's movie based lines is that they display well and I'll stand by that statement. They're all pretty realistic and nicely in scale with each other. Since the body of this figure is exactly the same as the first version of Rambo, he still stands at 6 3/4 inches, which puts him in scale with other figures like Dutch from Predator, Robocop, and the Rocky figures.  Rambo and Rocky are actually the same height, which is great since Stallone is not the tallest guy (Rambo is only supposed to be 5'10). It's been fantastic building up a collection of 1980's movie icons and I can only hope that NECA someday releases a figure of Dolph Lundgren, a new John McClane, and Jack Burton from Big Trouble in Little China. 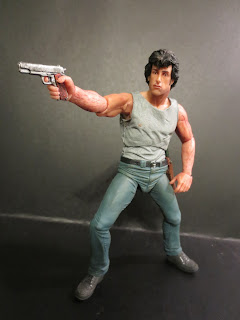 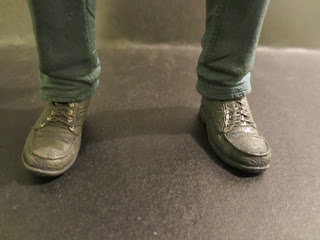 I do have one complaint, however: my Rambo has two right feet. It's not super noticeable at first since he's wearing boots, but eventually you'll see it. Since the feet are ball joints they can be swapped pretty easily so I sent NECA an email via their customer service center to see if I can get a left foot which I'll add on myself. I'll let everyone know and update the review once they get back to me. 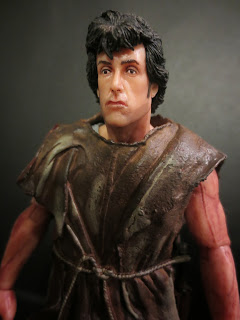 Besides the small arsenal Rambo carries, the two defining features of this figure are the new headsculpt and the makeshift combat poncho Rambo uses to stay warm in the cold, damp Washington weather. Everything else is reused from the previous figure (the jeans and tank top) but still retain the great sculpting. The jeans have a denim like texture to them, and all of the seams, pockets, and appropriate folds are present. Same goes for the tank top. Rambo's arms are appropriately muscular with a few visible veins. I believe these upper and lower arms might be reused from one of NECA's Rocky figures (they look nearly identical to the "Bloody Spit" Rocky from Rocky IV).  Covering the upper body is the new poncho. It's a rubbery piece that looks very makeshift and has a sculpted cord that holds the thing together.  It's pretty nice and seems to accurately capture the costume from the film. It can be removed, but doing so would might damage the fragile straps of the poncho. I'm not sure it's intended to be removable. Once again, the sheathe for Rambo's hunting knife is also present on his left hip.  It's the same as before and you can even see the pouch for the rectangular sharpening stone. The knife easily slides in and out of the sheathe. Now how about that headsculpt? It's quite good and definitely resembles a younger Stallone although I can't help but feel that the face is just a little too long. The hair is dead on, though. This Rambo doesn't have a headband to help control his mighty bushy hair and thus his mane is free to blow in the wind. The face is more neutral than the previous figure and looks determined, but not angry. This is Rambo deciding how he's going to kill you, not actively engaged in killing you. 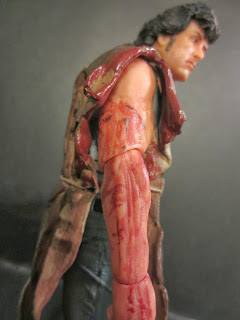 The paint on the outfit was great last time and it's great again this time, too. Be warned, though, that if you remove the poncho you might see some excess paint that has rubbed off from the poncho onto Rambo's shirt. Since the poncho is painted to look wet and muddy, it may not bother you as it accurately captures the dirt and mud that would have covered Rambo by this point. The head is excellently painted and features some pretty good (although slightly uneven) stubble. One of the biggest problems I had with the previous figure was that he seemed too pale. That's been fixed here as Rambo's skin is a bit darker and his arms, neck, and face all match. By the way, check out the blood and mud spattered all down his right arm. It looks great. 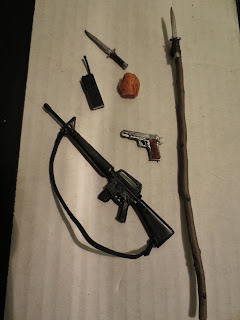 Besides the poncho (which may not be intentionally removable) Rambo comes with six accessories. Carried over from the previous release are the swappable right hand and Rambo's knife. The swappable hand is still a great idea as the firearms, spear, and knife are such different sizes that he couldn't hold all of them convincingly with the same hand.  I found the hand to be a relatively easy swap, although using a hair dryer or hot water briefly might make it easier and safer in the long run.  The hunting knife is Rambo's primary weapon, and has become almost synonymous with the character.  Check out this article on Rambo's knife from the first film. 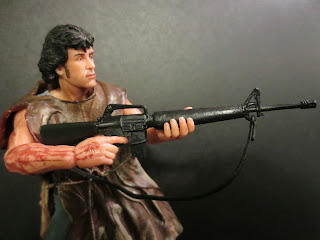 For new accessories, Rambo comes with an M-16, a .45 caliber pistol, a walkie talkie, and the spear he makes using his knife as the point. The M-16 is fantastic and features a bit of dry brushing and a sling. Rambo can hold it quite convincingly in a couple of different firing poses. 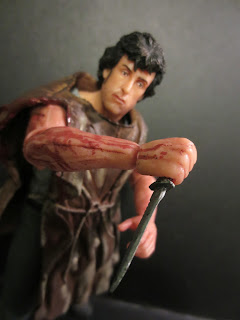 The pistol is great, as well, and also is meticulously painted for such a small weapon. I like the walkie talkie (just be careful of the antennae) and it makes a great accessory for a variety of displays. last, but not least, is the super cool spear. The paint and sculpting really make this look like a stick and the knife on the end is as detailed as the separate knife Rambo carries. You can get some cool two-handed poses out of Rambo with this little pointy death stick which is always a plus. Be warned: if you get this Rambo and Jungle Disguise Dutch together there's no end to the trouble the two of them might cause! 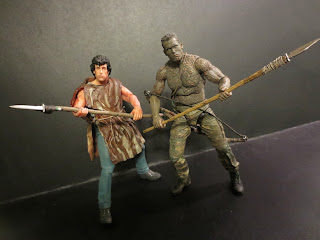 While the first figure presented a more iconic look for Rambo, the Survival Version features better paint and more accessories.  I'd say that's an improvement! Unfortunately, I'm a little miffed about the two right feet (although not as much as I'd be if it were two right hands). It's not terrible and I know it's not a widespread issue, but it still bugs me. As it stands, John J. Rambo: Survival Version gets a Good and a 1/2 rating. If NECA comes through and fixes the issue for me, I'll happily bump this fellow's score up. Bad QC just happens but good customer service is a choice. Personally, I'm looking forward to more Rambo figures. I know NECA has teased some images of a Rambo: First Blood Part 2 sculpt but I'd like to see Rambo in his green jacket and red shirt with a dufflebag from the beginning of First Blood before NECA fully leaves that film behind.

Want to capture Rambo yourself? Pick him up today at Big Bad Toy Store!

BTW, if anyone has two left feet on their Rambo and NECA doesn't get back to me, I'll trade with you!; )