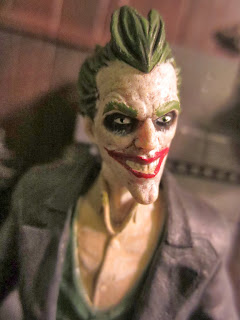 I'm a little further in Batman: Arkham Origins than I was when I reviewed Black Mask earlier in the week, so I know that the Joker is involved with the plot. Typically I would mark that kind of reveal as a spoiler, but since the figure was released about the same time as the game and the character was features prominently in the marketing of the game, I didn't figure it was much of a surprise to anyone. I mean, is it really a surprise when the Joker shows up anymore? Still, that doesn't mean I'm not glad to see the old guy when he does show up to pester Bats and that's exactly what he's doing here, although for the first time (at least in the Arkham universe). In Arkham Origins the Joker is not voiced by Mark Hamill as in the previous games but instead by Troy Baker (who voiced Robin and Two-Face in Arkham City and Booker DeWitt in Bioshock Infinite). With better quality control than some of the previous DC Collectibles releases (see here) and sculpting by Gentle Giant Studios, this series of figures positions itself to expand upon the previous waves of Arkham Asylum and Arkham City figures. Does it make the grade? Find out, after the break.... 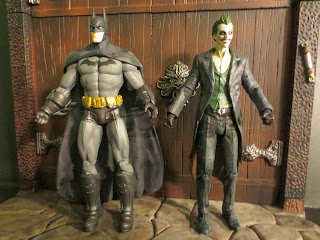 The Joker stands about 7 1/8 inches tall which makes him seem a bit taller than most of the previous Arkham figures (he's taller than the Arkham Asylum Joker that came with Scarface) but he still looks fine when measured against any of the Arkham City Batman figures. The design style is pretty similar with those previously released figures although the Arkham Origins figures seem a bit bulkier in their builds. I mentioned it in my review of Black Mask, but while the packages are clamshells they are actually very easy to open and are somewhat collector friendly if you desire to display or store your figures in them. 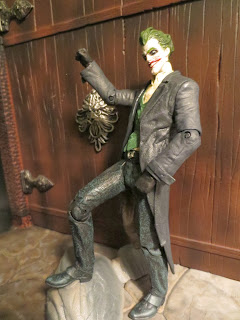 While the last series of Arkham City figures featured quite a bit more articulation (and more breakage) than those that came before them, these newer figures remind me of older DC Direct figures due to their more limited articulation. The Joker features: swivel ankles, hinged knees, a swivel waist, swivel shoulders, ball jointed elbows, ball jointed wrists, and a ball jointed neck. While there isn't much you'll be able to do with the legs, I do like the range of motion that the elbows and wrists give you. Too bad there's no ball jointed shoulders, though. The head is great and has a wide range of motion to really add some creepy expressiveness to the figure. Everything seems solid and I've had no quality control issues at all so far, so hopefully this means DC Collectibles has addressed their issue of using brittle plastic on the joints. 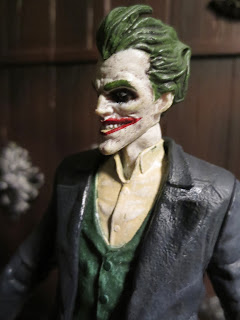 I really like this look for the Joker. While the Joker in the previous games seemed more inspired by Batman: The Animated Series and the character's appearance in the comics during the 2000's, this Joker appears to be more inspired by Heath Ledger's portrayal in The Dark Knight and Azzarello and Bermejo's graphic novel Joker. He's still flamboyant, but it's a bit more creepy serial killer or mobster flamboyant rather than super-villain flamboyant. The head sculpt is excellent with the familiar pointed chin and messy hair, but there's something extra menacing and almost shark-like about it. It's easily one of my favorite Joker head sculpts on an action figure. The clothes work as well: dress slacks and a shirt with a simple vest and a long tailed jacket. There are lots of folds and wrinkles on his outfit to give him a rumpled, messy appearance. He's a guy with some slick dressing tastes but lacking any concern with keeping things nice and neat. 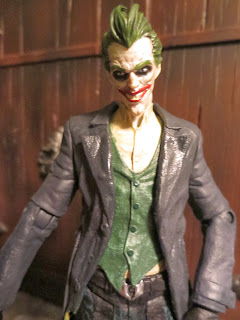 The paint work is pretty good from the waist up, especially on the head. I like the gloppy look of the makeup on the face (it almost looks like it might be running a bit) and the crimson lips. The jacket is a very, very gray with just the slightest hint of purple to it. It still gets the point across, but seems to fit in better with the world of the early years of Batman's career depicted in the game. The vest and the pants seem to have some dry-brushing on them to give them a grittier, grungier feel. It works on the vest, but not so much on the pants. It doesn't loom awful like on Black Mask's jacket, but I'm not sure it accomplishes it's goal. 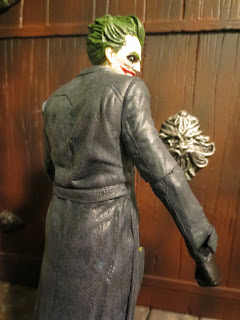 Unfortunately, Joker does not come with any accessories. No stand, no knives, nothing. Not even lint. Anything would have been welcome, but nothing but a big ol' goose egg here.

While I know his articulation isn't quite up to par with most other modern figures, I really do like this guy. It's a great interpretation of the Joker that's still recognizable as the Clown Prince of Crime but different enough to stand out from the crow. A great sculpt and some solid quality control help to make this guy well worth your time if you're a Batman or Joker collector. I'm giving him a Good and a 1/2. He's certainly not the best Joker figure ever made, but he's still a nice, solid figure for your Joker collection. I'm really excited to add this guy to my shelf and I imagine lots of other fans will feel the same way. Now I've just got to beat the darn game! 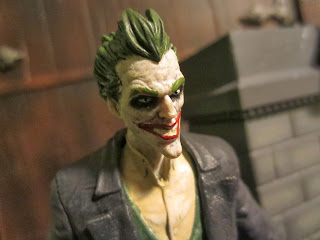 If you're interested in picking up this guy, you can run over to Big Bad Toy Store and order him right now! Mr. J doesn't tend to stay in one place for too long so you might want to grab him sooner rather than later.