Action Figure Review: The Joker from The New 52: Super Villains by DC Collectibles 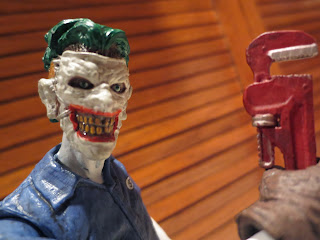 On an older episode of the Confirmed Epic Podcast Brad and I discussed the New 52's Death of the Family story arc that covered 23 issues across nine different titles. Advertising the return of the Joker into the New 52 and paying homage to 1988's A Death in the Family story line (which featured the death of Jason Todd by the Joker's hand), Death of the Family focused on the Joker's plans to eliminate the Batfamily in order to restore the original dynamic between himself and the Caped Crusader. In order to convey the Joker's new personality and purpose, he was depicted by writer Scott Snyder and artist Greg Capullo as trading in his classic purple suit and deadly prankster gags for a more utilitarian workman's outfit and a tool belt. DC Collectibles has really been impressing me lately as they've upped the quality control and the detail of the product they've been producing, so is Joker another success? Read on and find out after the break.... 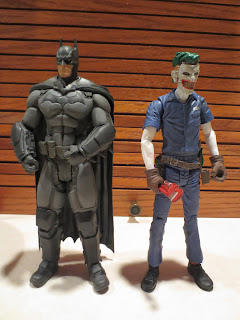 The Joker stands about 6 3/4 inches tall and is sculpted in a style that quite nicely matches Greg Capullo's artwork without being too slavish to artistic nuances. He's going to fit in just fine with any of your other DC Direct/ DC Collectibles figures, particularly those from the New 52 specific lines. While DC Collectibles has been releasing much of their product in some quite dull white boxes for the past year and a 1/2, the New 52: Super Villains series comes in some nice green window boxes that nicely show off the figure while looking visually appealing and being somewhat collector friendly with a little effort. 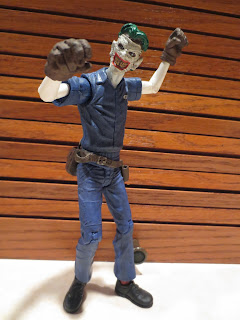 I don't believe that anyone would classify the Joker as super articulated, but he's definitely not a mini-statue. The Joker features the following points of articulation: swivel ankles, hinged knees, swivel hips, a swivel waist, swivel/ hinge shoulders, swivel biceps, hinged elbows, swivel wrists, and a ball jointed head. The first thing I'll say is that I had no breakage issues with the figure. After having multiple DC Collectibles figures break on me over the past year (or arrive broken), it's nice to be able to order DC Collectibles figures without concern. (While I reviewed the Arkham Origins figures first, this Joker was actually the first DC Collectibles figure I ordered after having Talia al Ghul and Deadshot break on me nearly instantly.) Joker's joints are nice and tight with the exception of his biceps (which are a bit loose). While the legs won't see much variety in poses due to the swivel hips, the upper body is fairly mobile and will definitely allow you to place Joker and his tools into a few varied and sinister poses. 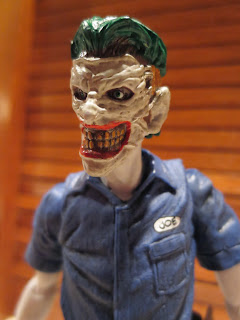 If the head sculpt featuring the Joker's face crudely attached with various hooks and wires and a leather strap doesn't immediately grab your attention, I'm sort of worried about you. It captures the grotesque and sure to be classic image of the Joker's severed face that was first teased at the end of the first issue of the new Detective Comics and defined his appearance during Death of the Family. The detail on his teeth and the way his eyes peek through the reattached fleshy mask really convey the Joker's madness despite his otherwise mundane outfit. Don't take mundane to be poorly done, however; the Joker's blue mechanic work suit looks great and captures all of the details one would expect to find. I particularly like his over-sized gloves and the tool belt that's filled with various tools. I'm counting three screwdrivers, pliers, an awl, and some wire clippers all tucked into the various pouches. There are also some additional loops and pouches that can hold the extra included tools when they're not in use. 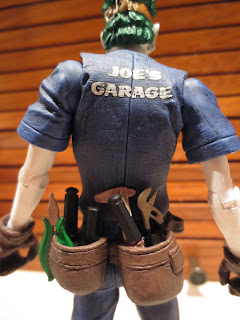 Overall the paintwork is fairly strong, particularly on the head and face, although there is some slop on the neckline and around the edges between the hair and the leather strap. The "Joe" name tag on the front of the uniform and the "Joe's Garage" logo on the back are clear and legible. There's a heavy wash on the suit itself that works pretty well here in giving the Joker a grungy look befitting his year spent in seclusion plotting his scheme to destroy the Batfamily. All of the tools on the tool-belt are painted, but the metal parts have a weird reddish tint to them. I'm not sure if this intended to represent residual blood stains, rust, or some type of weird error, but I'm not really thrilled about it. It doesn't really evoke any type of effect and looks like a colored plastic showing through a thin layer of paint. 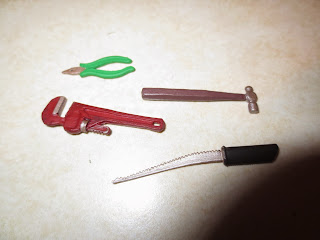 Saying that, I'll jump into talking about the accessories. I do think the pinkish tint is intentional because it's also apparent on the metal parts of the accessories themselves. It's not horrendous, though, and actually I'm pretty happy with these accessories. The Joker comes with a pair of wire cutters (or needle nosed pliers), a pipe wrench, a hammer, and a odd, serrated saw blade. Any of the tools can fit in Joker's right hand and you can make most of them stay in the left hand with a little finagling, too. I love the inclusion of these and the way they look both in Joker's hands and when stored in the loops and pouches on his belt. Just be careful with the hand saw- it seems like it could be a little bit fragile. 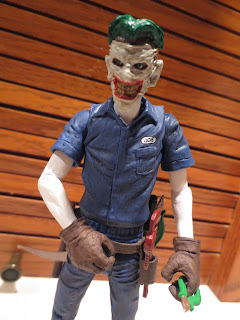 I'm really happy with this figure. It's great to see this version of the Joker already captured in action figure form so soon after the story line. I hope DC Collectibles continues to offer collectors solid action figures based off of recent DC story lines because I like what we've received so far. The Joker has a wonderfully disturbing sculpt, good paintwork, and some pretty neat accessories, all of which combine to create a Joker figure that definitely will standout on your shelf due to his nontraditional appearance. This is a Great figure and really emboldens my hope that DC Collectibles has taken care of the QC issues that plagued them over the past year and a half. Now, please give us versions of Batwoman, Batgirl, Red Hood, and the other members of the Bat Family whom we haven't gotten recently! 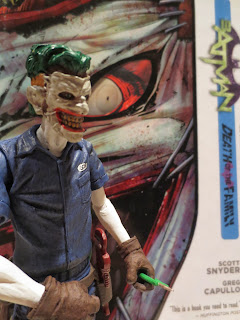 Want to order a Joker of your own? Big Bad Toy Store has him in stock and ready to ship to you today!