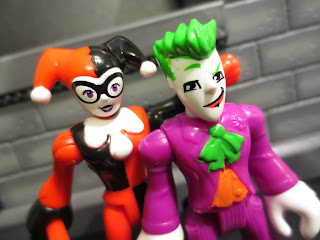 Every year I pick up a few Batman Imaginext figures simply because they're really cool. One figure I really wanted was Harley Quinn, but she was released in pretty limited numbers initially and thus quickly began being sold for ridiculous prices by scalpers. Thankfully, as part of Imaginext's extensive DC line at Target (including great figures like Black Manta and Gorilla Grodd) Harley Quinn and the Joker have been released. This isn't the same Joker as the figure that can be found in other Imaginext sets, either. I've reviewed that Joker here and can say with confidence that I prefer the Joker released in this set. So, a two pack of Harley Quinn and her puddin' Joker as kids toys- what could be better? Read on and learn more about this dastardly duo after the break.... 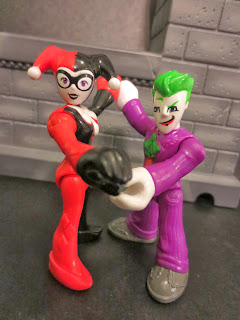 The figures are between 2 3/4 and 2 7/8 inches tall (with Harley actually being taller than the Joker for some reason). They'll fit in wonderfully with the rest of your Imaginext figures and other similar kids lines (although they are a bit taller than the Hasbro 'Heroes' lines) that feature exaggerated proportions like larger hands and feet. They have a cute style that seems to be transitioning a little bit as the line goes on. While earlier figures had more sculpted faces, these figures have some of their facial features such as eyes and mouths painted on. Just a stylistic difference I've noticed that may appeal to some folks while being viewed as being inferior by others. 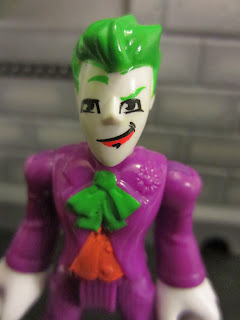 Each figure features the following articulation: swivel hips, ball jointed shoulders, swivel wrists, and a swivel neck. The legs actually swivel together, so no kicking for these two. The shoulders and wrists are a nice touch, though, and do add a great deal of play value. They feel very sturdy and seem like they could take a good deal of abuse.

Let's start with Harley- you might think that Fisher Price would try to reuse the same female body over and over (since they're ultimately owned by Mattel, don't ya know) but you would be wrong. Not only does Harley have a thing and curvy female body, but she has little details on it such as diamonds on her legs and arms and the little jester's bib she wears. The face is mostly just a painted detail with the only sculpted element being her little nose.  The Joker is also a completely new sculpt and is wearing his always snazzy suit with sculpted pinstripes on the pants, a bowtie on his shirt, and a flower on his lapel. The hair is perfect stylized "kiddie" Joker hair and adds to his wild, disheveled look. Like Harley, his face is mostly painted on although he too has a sculpted nose, although it's more pointy and angular. 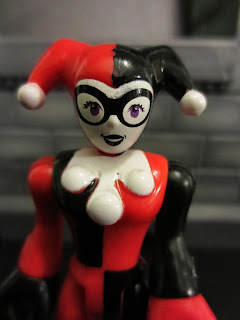 Since paint gives these guys lots of their details, it's important that it's done well and I can say that is indeed the case here. Harley's red and black outfit is pretty clean and neat for the most part although some of the white details on her jester's cap and face don't completely cover the darker paint underneath. I like the bright eyed look they gave her, although something more mischievous would have been better. That's the direction Fisher Price went with the Joker and it looks great! He's got a fun smirk and eyebrows that are all over the place; one's cocked up while the other is lower and curved the opposite way. He really has a lot of character in his face. The flower on his lapel remains unpainted, but his bowtie gets a green paint app. His vest is orange but it looks really messy, almost as if orange and purple paint got mixed together. 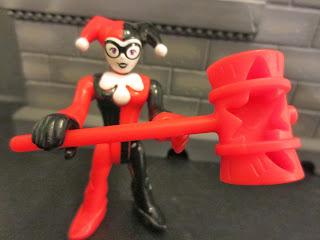 While most Imaginext figures come with one figure and a larger accessory, this set comes with two characters. While I prefer to get more characters rather than the more toyish many vehicles I do like the little accessories these guys tend to come with. Harley's the only character who gets an accessory in this pack and it's her gigantic mallet. It's a simple red plastic mallet with a few details cut out of the sides to give it some character. Something for the Joker would have been nice, such as a pie or a Joker fish, but it just wasn't in the cards. 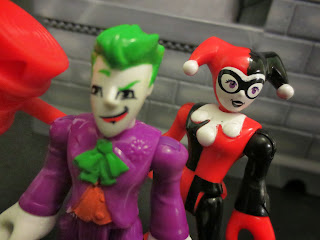 This is a great set that should appeal to more Batman collectors than the average Imaginext item. It's a pretty neat concept to pair Harley and the Joker together in a two-pack that can be bought at a regular retailer for around $6 or $7 dollars. I like the style of these figures and they have pretty good sculpts. The paint work could be better, but it's strong enough on the faces which is where it counts the most. Due to the cost and coolness of the set, though, I'm content with giving these two a Great. It's a fun little set that should appeal to most Batman fans regardless of whether or not they really care about Imaginext toys. Just be warned: Imaginext toys can be like a drug for collectors and I've seen a few folks get sucked in, especially now that Imaginext is offering up blind bags (truly a gateway drug for any collector). These two, however, certainly deserve a spot on your desk, toy display, or comic shelf. To ignore them would be just criminal!