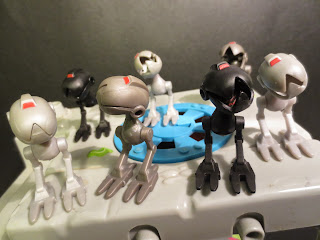 While my assumption is that most of you reading this site are quite familiar with toy collecting terminology, I'm aware that there's always someone out there who is new to the hobby. Just like you. Hi there! I see you over there. That's a mighty fine set of boots you're wearing. Mighty fine, indeed. What's that? You don't know what army building is? Well, allow me to educate you then: army building is the term for purchasing multiples of an action figure such as a Stormtrooper, Viper, Horde Trooper, or other nameless, faceless grunt in order to create a large group. Think about it- how often does just one Uruk-Hai attack the fellowship? How often does Wolverine fight just one Hand Ninja? How often does just one Goomba attack Mario? Rarely to never: that's how often!

As a kid, the first line that ever made me want to army build was Teenage Mutant Ninja Turtles. Perhaps it was due to the influence of the arcade game, but every time I played with my TMNT figures I wanted to have them fight groups of either Foot Soldiers or Mousers, just like in the game. Army building is a tough thing for a kid to explain to a parent, however, and while I had many TMNT figures, I never had more than one Foot Solider or more than one Mouser. The first line I was able to decently army build with was Star Wars: Power of the Force II due to the presence of additional Stormtroopers such as the Luke and Han figures in disguise, the Crowd Control Stormtrooper, and some of the cinema scenes sets. I also had a good friend, Felix, who traded me lots of his Star Wars figures for Batman figures (a trade I wish I never had made) but at the time netted me additional Snowtroopers, Stormtroopers, and Rebel Soldiers. Anyways, that's army building in a nutshell, and fortunately Playmates has made it easy for TMNT fans (both young and old) to army build MOUSERS by packaging them seven to a pack. I love this idea and was really excited to find this set. Ready for some cool metal minions? Then join me after the break.... 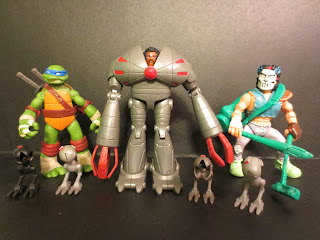 These guys are really tiny (only about an inch and a half tall) but look great next to the turtles. Actually, I think these guys could work with a lot of different toy lines- who can say how big or small a robot should be? These could be great as little Horde drones of some kind for Masters of the Universe Classics, or to terrorize smaller lines like Mystical Warriors of the Ring or M.U.S.C.L.E. As mentioned above, these guys come seven to pack. They're all the same sculpt, but come in three different colors (three silver mousers, two gunmetal mousers, and two black mousers). 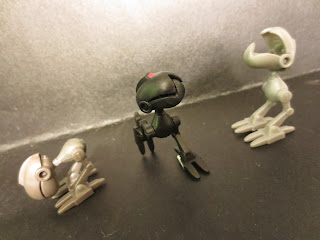 While these guys don't have a ton of articulation due to their size, what articulation they do have is completely awesome and sturdy. I have probably spent more time playing with these guys than I have with any other action figure that's come out this year. Each Mouser features swivel hips, a ball jointed head, and hinged jaws. The articulation is tight, smooth, and makes these guys loads of fun. The combination of the opening mouth and ball jointed head really allows for some great, dynamic poses with these guys. The swivel hips are nice because you can make the mousers walk, fold them up like battle droids, and even find weird ways to combine them (while recording the last Confirmed Epic Podcast, I tried to make a Mega Mouser-zord while Brad put them into provocative poses with one another). 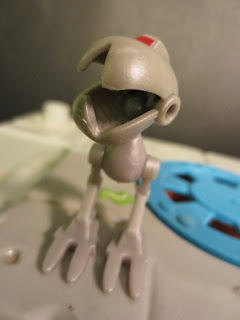 The sculpts are simple but nice. The basic robotic look of the Mousers is captured here, including their odd, oversized feet and bulbous heads. If you look in their mouths, there's actually some sculpted texture in there to give them the look of a palate. There's also a hatch on their underside, either for maintenance or for emptying anything they've chewed up and swallowed. 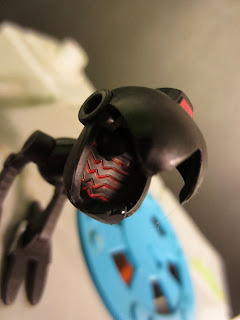 I like that Playmates gave us a few different color choices here. The silver Mousers look the most traditional, but the gunmetal Mousers are pretty cool as well. I've never seen black Mousers before, but they work as some sort of stealth variant of the traditional Mouser. These guys are simply molded in the respective colored plastic, with the only paint feature being the red "eye" on top of their heads. Very simple but very effective. There's actually one cool little detail which only the black Mousers have: the textured lines in the mouths are painted red. It looks awesome! 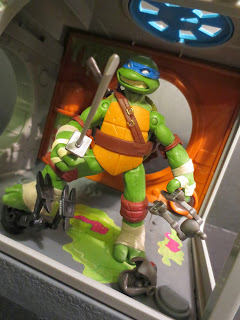 While these guys don't come with any accessories, I don't really think that's a problem here. You are getting a nice little batch of 'bots in one pack so I think they're definitely worth the price. The heads are easily removable from their ball joint, so if you want to have your turtles in a battle scene breaking these guys to pieces, you'll appreciate that feature. 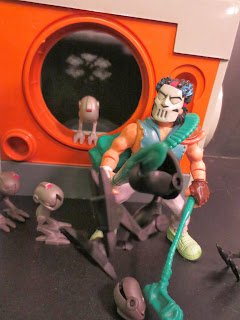 These guys are one of my favorite action figure purchases this year. While I'm sure most kids and collectors can appreciate how cool the idea is of giving you multiple Mousers in one purchase, you really have to get your hands on them to see how fun they are. Even fans of the vintage Teenage Mutant Ninja Turtles line should dig these, as they'd go great with those guys, too. This is a nice set, and an easy Great and a half. If they came with maybe one more Mouser (a white one would be cool) or perhaps even a little rat, I'd easily go all the way, but as it stands these guys are still darn good and darn fun.

While Big Bad Toy Store doesn't have the Mousers in stock yet, they do have lot of TMNT stuff available, including pre-orders still available for the TMNT Classics Bebop and Rocksteady.