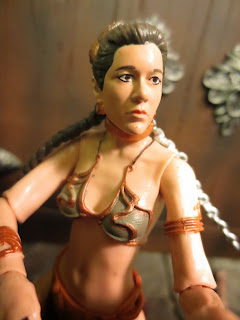 Back in the Power of the Force II days, was there any figure fans wanted more than Princess Leia in her slave outfit? I remember receiving her on my birthday in 1997 from a friend who was a fellow collector and at the time it was like a dream come true. Face it: there no more iconic female character in the world of fandom than Princess Leia and fanboys (and fangirls) went nuts over Carrie Fisher rocking that metal bikini. Hasbro has since released a few versions of Leia in her slave outfit in the traditional 1/18th line but I was quite surprised to see them bringing this version of the character into Star Wars Black so soon. How'd she turn out? Well, read on and find out after the break.... 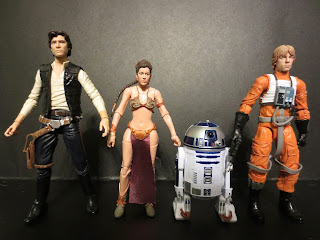 When Hasbro started getting more meticulous in implementing a more accurate sense of scale in the Star Wars toyline, I remember being shocked by how small the Princess Leia figure. She was tiny compared to everyone else, although that really makes sense since Carrie Fisher is only 5' 1". Since Star Wars Black seems to be paying close attention to scale, Leia only stands just shy 5 1/4 inches. This seems about right to me, at least when you judge her compared with other figures. Since a lot of folks believe she is too tall, let's play with the scale of the figures a bit. Han Solo is about 6 1/8 inches while Harrison Ford is listed as being 6' 1". Check out this picture and notice that Ford is looking down. I think this shows that the scale between these two is actually right on, it's just that we're not accustomed to most toylines taking scale seriously. 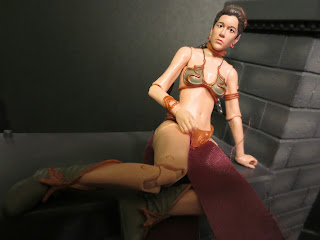 Leia's articulation is a little different than most of the other figures most likely due to her smaller frame. She features: hinged ankles, double hinged knees, swivel thighs, ball jointed hips, a ball jointed torso, ball jointed shoulders, ball jointed elbows, ball jointed wrists, and a true ball jointed head. You'll notice she doesn't have the excellent rocker ankles that most other Star Wars Black figures have, not does she have nor does she have the hinged neck. I'm actually OK with that hinged neck joint being missing as I think it ruins the sculpt, but I wish she had the lateral ankle joints. Articulation can be tough to implement well in a figure that's not wearing much clothing, but I think Hasbro pulled things off pretty well for the most part. The double hinged knees are probably the biggest eyesore, but I was impressed by how well they hid the torso ball joint. I guess the question most people are wondering is "Can you get Leia in the sitting pose she takes while leaning against Jabba the Hutt?" The answer is: kind of. Take a look at the picture. You can definitely get her in that pose, but little details are off. Considering that most likely no other figure is going to reuse these parts (maybe Oola if they get to her) I think Hasbro should have either built the articulation a little differently or went with the option used on this Princess Leia figure where an alternate solid piece was used to replicate her unusual and difficult to articulate sitting pose. Everything feels nice and solid, though, and I didn't have any QC issues with my figure. 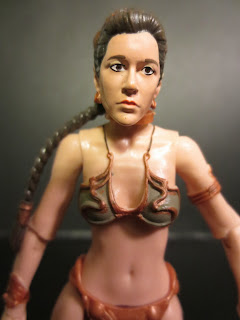 How's the sculpt? It's not bad, but it's certainly not a homerun either. Starting with the headsculpt, while I feel like I can see Carrie Fisher in some of the facial features, this could also be a generic Princess Leia cosplayer. I want to say that the nose seems a little too large and that the chin is off. The face shape seems right, however. The hair looks good and is really detailed showcasing the intricate braiding. It's hanging off to the side and doesn't interfere with articulation at all. Her body looks good- the proportions seem about right and she looks like a regular, toned female versus an amazon or stereotypical comic book girl. I was hoping that the details on her metal outfit would be a bit more sharply defined, but the detail seems a bit soft. Leia actually uses some soft goods to create the cloth that hands from her belt. I like the idea but I'm not sure I like the material chosen. It's a bit shiny and seems to already be fraying on the sides. Her belt is a separate piece that covers both sides of the material and is glued down. Once again, looks OK from a distance but the fraying material really bothers me considering I just got the figure last week. 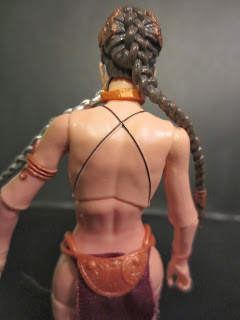 Most of the figure is molded in Leia's flesh tone while the head is molded in the same color as her hair with a painted face. I like the look of painted faces better, but it does make her face a little darker than the rest of her body. Some of the paint work is really neat and clean, such as the ornamentation in Leia's hair, her boots, and her eyes, but other parts look really messy. One of the straps across her back is completely out of place and when you look closely at her bra or the circlets on her arms, you can see the details are pretty messy. Probably the worst part is the belt- it's nicely detailed but not painted at all and matches neither the other parts of her wardrobe nor the actual costume. 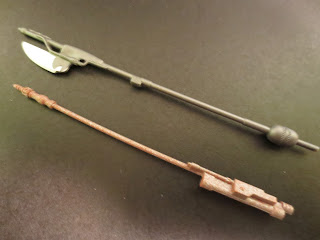 Leia comes with two weapons and her chain which is a separate piece than can be slid off of her neck when her head is removed from it's joint. It's made from a soft plastic and is painted to look metallic. Her two accessories are a BD-1 Cutter vibro-ax and the electrostaff that was used when she infiltrated Jabba's palace disguised as the bounty hunter Boushh. The vibro-ax (which Leia took from one of the skiff guards) is a great accessory. It has a high level of detail and feels solid and sturdy. The electrostaff Leia uses in her Boushh disguise is problematic, however. Unless this is based off of some other prop from Return of the Jedi that I'm unaware of, it's both the wrong color (should be darker) and it's way too short. Remember, it's supposed to be taller than Leia. That's a really odd detail for Hasbro to get wrong- maybe they just reused this piece from one of the earlier Leia in Boushh disguise figures from the 1/18th line? I kind of wish she'd come with the cloak from the deleted sandstorm scene, R2-D2's drink tray, or even Salacious Crumb instead of the pike, as the Boushh staff should have been saved for Leia in Boussh disguise (one of my favorite Leia variants). 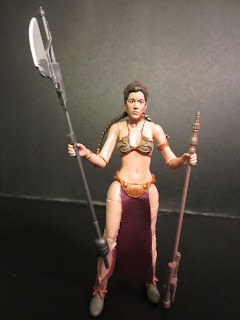 Princess Leia in her slave girl outfit should have been one of the best figures in this line but instead I think it's the weakest figure released thus far. With an off likeness, some sloppy paintwork, a fabric skirt that's already fraying, and a severely undersized accessory, the greatest nerd sex symbol of all time just hasn't received the figure she deserves. Don't get me wrong, the figure's not atrocious or anything but she's definitely not up there with the other figures in the line. Maybe it's because it's more difficult to sculpt females or figures with minimal clothing, or perhaps it's just due to the super high expectations I have for this figure; either way, Leia's a disappointment. I'm giving her an Eh and a 1/2 and hoping that she'll be redone at some point in the future, something I'm not really looking forward to. In my opinion, with Star War Black each figure should be the ultimate version of the character right out of the gate so it's sad to see that I'm already wanting to see Princess Leia get a redo. Maybe when the rumored Star Wars Black Jabba the Hutt gets released, huh? 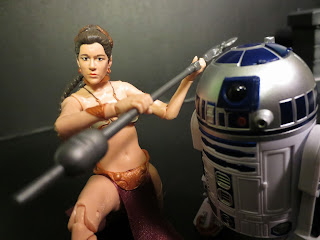 If you're looking for these guys, Big Bad Toy Store has the entire second series available for only $79.99 or Princess Leia by herself.