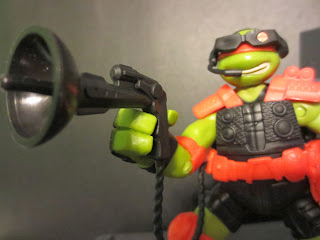 Finally! With this review I'll be done reviewing all of the Stealth Tech Turtles. I've loved all of these guys so far and they're most certainly one of my favorite sets of variant TMNTs ever. Taking the coolness of the turtles and their crazy ninja skills and adding in a wealth of stealth and spy gear that would make Sam Fisher, Ethan Hunt, James Bond, and Solid Snake all jealous turns out to be a pretty cool way to approach the shell shocked pizza kings. So how does Michelangelo fare? Finish your pizza, yell "booyakasha," and join me after the break to find out.... 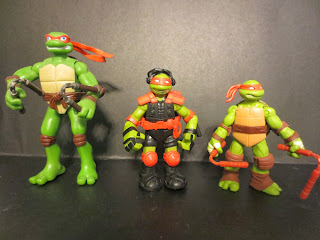 Mikey's definitely the shortest of the turtles, so it's fitting he comes in right around 4 3/8 inches tall. He's perfectly sized to fit right in with your other TMNT figures based off of the Nickelodeon series. These guys make a great, cohesive group. 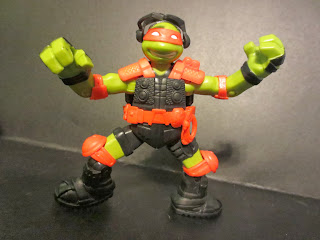 He's articulated like the rest of his brothers: ball jointed knees, ball jointed hips, ball jointed shoulders, ball jointed elbows, and a ball jointed head. The only point of articulation that Michelangelo is missing that the first release from 2012 had is the wrist swivel. My Mikey's left leg is a little loose and seems to swivel a bit more than I'd expect it too. It doesn't seem to affect his ability to stand, though, but it seems worth nothing. Other than that, the quality control is pretty good. These guys definitely seem like they could handle the rough play that kids can put toys through. 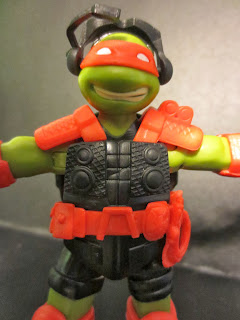 To start things off, Mikey's got a big goofy grin that really fits his personality. He's showing all his teeth and even has teeth parted a bit on the side. He's wearing a headset with headphones, glasses, and a microphone; the top of the headset is sculpted onto Michelangelo's head while the glasses and microphone are a separate piece that can swivel into position on his face or up on his forehead. His stealth suit is a sleeveless armored outfit with shorts and full boots with pouches and grips on the soles. It reminds me of something a climber might wear, especially his rounded knee pads and minimalist elbow pads. He's wearing shoulder pads that have a textured surface and a utility belt with a T-phone, rope, and lots of pockets surely filled with all kinds of goodies. The belt's cool, but mine seems much looser than the belts from the other turtles and seems to fall a little bit on one of the sides. 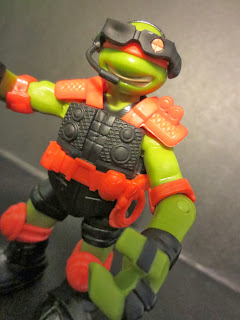 Rather than use a lot of paint, the majority of the figure is molded in the necessary colors. The belts, pads, and bandanna are all separately attached pieces and are molded in orange.  The only surfaces that actually have paint are Mikey's legs, the straps on his hands, and his eyes and teeth. Everything is pretty clean although the wrist strips are a little uneven. One thing that's kind of weird which I noticed is that my Michelangelo has a glue like substance crusted on his left knee pad. Not sure where this came from- perhaps an errant drop from his assembly. 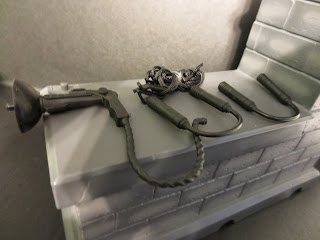 The accessories on these guys have been the high points and Michelangelo doesn't disappoint, although his complement is not as cool as his brothers. Mikey comes with the standard rappelling cord and carabiner that the other guys come with, two nunchucks (these don't look like wood, but rather appear to be metal or a very heavy plastic), and a listening device.  The listening device looks to be a super high powered directional microphone of some kind and has a cord that plugs into Mikey's belt. Pretty fun stuff that can be used by nearly any of the turtles, if you desire. 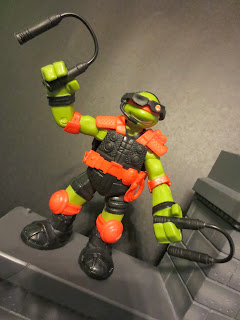 Well, Michelangelo is the last of the Stealth Tech Turtles to be reviewed. I still love the concept of these guys and stand by my assessment that they're terrific toys. In a line like TMNT, variants are to be expected. Fortunately, these guys are some of the coolest TMNT variants ever. I'm giving Mike a good rating which is lower than the other guys. This is due to the slightly loose leg, drooping belt, and weird glue residue on the knee pad. Nothing earth shattering but still some blemishes on an otherwise good toy. It's nothing personal, Michelangelo, it's just business!