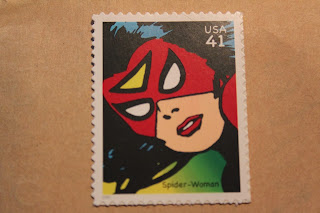 Oh, Spider-Woman, how I love thee!

Just a quick blurb on my recent find: Personally, I think Spider-Woman is the hottest of all the Marvel and DC heroines. No one comes close (not even Batgirl) [*FYI, This will be both Terry's first and last post- The Editor*]. I've spent the past few years collecting everything I can get my hands on and over the weekend, I found this stamp. More details and pictures after the break.....


At the 2007 Comic-Con in San Diego, the USPS issued a colorful pane of 20 stamps depicting Marvel Comics superheros. This was the second release of comic book characters on a stamp. The first was in 2006 at Comic-Con depicting DC superheros. The DC pane (top) includes Superman, Green Lantern, Wonder Woman, Green Arrow, Batman & Robin, The Flash, Plastic Man, Aquaman, Supergirl, and Hawkman & Hawkgirl. The Marvel pane (bottom) includes Spider-Man, The Incredible Hulk, Sub-Mariner, The Thing, Captain America, Silver Surfer, Spider-Woman, Iron Man, Electra, and Wolverine. Below the characters are their correlating comic book covers. On the back of each stamp is information about the artwork and character.


I've never been a stamp collector, but I just couldn't pass this up. I figured it would go great with my collection. As the holiday's approach, I'm sure I'll have many other Spider-Woman items to talk about.

Also, if you're a comic lover like myself, check out this cool Etsy shop called ComicCrafts where you can pick up comic themed bookmarks and magnets.