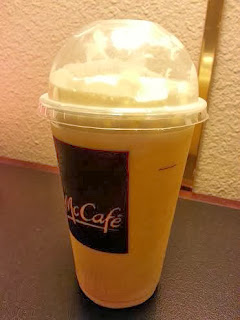 From the journal of Barbecue the 17th,

It has been a long trek through sleet, slush, and snow on my way to holiday festivities with family but alas, I have taken respite for the night in a humble inn. Upon bargaining with the innkeeper for a night's keep and surveying my lodgings, I secured my baggage and trod over to the nearest purveyor of general goods, whale oil, and edibles in order to make my sustenance for the night. The eatery was run by a Mr. McDonald and served grilled patties of beef served on a split bun with condiments, sliced fried potatoes, and cold milk based beverages with a variety of sweeties blended into them. I was intrigued by one of these shaken milk refreshments that was based around the traditional holiday beverage Eggnog. I ordered one from the burger-keep, passed him some coinage, and sat down to wait and discuss the issues of the day with other travelers enjoying their meals. As the snow danced down like ash from Mount Vesuvius, I sat waiting for the employees of Mr. McDonald to freshly prepare my meal. I watched as the strange, milky beverage was produced from what I can only assume was some sort of steam powered cow and served to me in what appeared to be a soft, flexible glass. I don't know what sort of devilry this Mr. McDonald employees, but the luscious, yellow beverage dazzled my tastes and caused my holiday spirits to soar. More on the next page.... 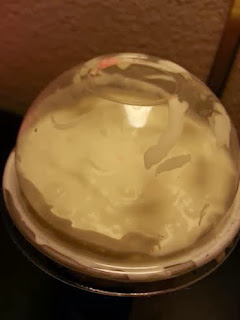 I was pleased by the yellow color of the milk based beverage. It was brighter than the harvest moon on a bright Autumn night. It was nearly brighter than the flash of lightning that ended the life of my third wife Charlene. It was much brighter than a spring duckling before he is covered in plum sauce. No regular beverage could ever be this bright! I dost think that Mr. McDonald is dabbling in some sort of alchemy, but I must say the color was quite bedazzling. Atop this glowing, frothy concoction was a layer of sweetened, whipped cream and a cherry from the region of Maraschino (a place I spent time during my service overseas- how I still pine for the warm embrace of my comrades in arms Reginald and Bollo). The presentation was quite appealing, although the cherry did sink to the bottom of the concoction which twas not as thick as I had prayed the steam-powered cow might produce. 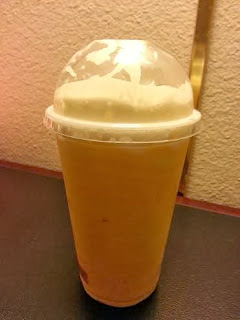 The flavor was pleasing. While it was colder than the metal underwear I wore, it was also enlivening to my heart on that night. The flavor was intense. While it certainly reminded me of the Eggnog I drank as a small child in the old country, it tasted somehow more intense- as if an unnumbered amount of tiny spirits were dancing on my tongue and manipulating my tastes with their tiny, spicy flavored lashes. As I finished the beverage (whilst discussing the benefits of leeches as opposed to bloodletting with a local barber surgeon) I was pleased as not only was the flavor strong while partaking of the cup, but it stayed with me until this writing. As I was leaving Mr. McDonald's restaurant a fiend in the black and white striped garb of a highwayman attacked a poor woman and stole a small satchel of the cooked burgers. Myself and another gentleman proceeded to defend the honor of this woman and chased this burglar into a nearby field. I proceeded to give him a cauliflower ear and rap him firmly on the John Thomas until he relented of his stolen goods, which we delivered back to the woman. "Rubble, rubble" the poor devil cried. Rubble, rubble indeed. After this I returned to my quarters, removed my steam-powered arm, and sat down to record these events for my future progeny.

Signed by my own hand,