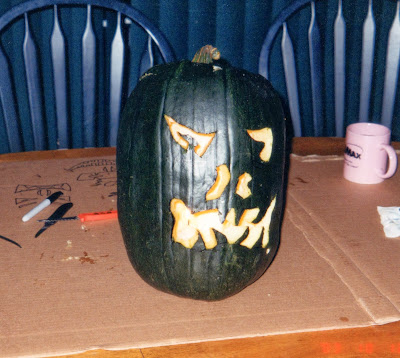 Halloween has come and gone right?  Maybe...if you read some wimpy website. Here at ThEpic Review, however, Halloween goes another week. Why's that, you ask? Because we have Re-Halloween. What's that you ask? Why it's an extra week of madness, treats, and pumpkins! It also isn't something crazy we just made up- it has roots. They're only a few years old, but they're roots nonetheless! Want to learn more about this most unusual holiday? Then read on for "The Legend of Halloween! (If we were sitting around a campfire, this is the point where I would throw sawdust into the campfire to make it flare up like in Are You Afraid of the Dark?.)   Read the Legend after the break.....

Despite all the planning, anticipation, and passion, Halloween doesn't always happen the way you planned. That's what a few members of ThEpic Review experienced in 2010 when Halloween sort of fizzled. Bad work schedules, minor illness, girl troubles, and other factors all combined to ensure that Barbecue17 and Andrew didn't have a great Halloween. Together, they decided to pretend to celebrate Halloween again one week later. That gave them another week to carve pumpkins, watch horror movies, wear costumes, and to enjoy the season. Re-Halloween was such a success that its been celebrated and referenced ever since. Candy and decorations go on sale, many Haunted Houses still operate, and there's never a bad time to watch Trick 'r Treat. Re-Halloween is sort of like a scarier version of the 12 Days of Christmas.

What's awesome is that this year due to some nasty winds my parents city seemed to reschedule Trick 'r Treating until Friday. At the last minute. So many kids went anyways, but they'll be able to go again tonight. I'm so excited! Re-Halloween is catching on!!!

What are your Re- Halloween plans?