Toys in Costume Review: Gladiator Batman from Legends of Batman by Kenner 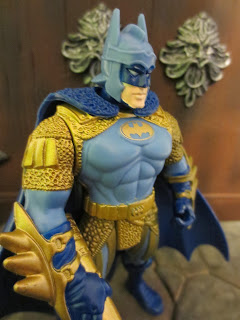 "My name is Bruce Anthony Wayne, commander of Batman Inc., General of the Outsiders, loyal servant to the people of Gotham. Father to a murdered son, son to murdered parents. And I will have my vengeance, in this life or the next." - Gladiator Batman


In Kenner's mid 90's Legends of Batman line we saw a variety of Elseworlds variants of the Caped Crusader and his greatest foes. Pirate Batman, Post-apocalyptic Batman, King Tut Batman; the list could go on. Today we're looking at one of the figures from the third series of figures released in 1996, Gladiator Batman. Yup, this is Batman decked out as an ancient Roman Gladiator. How, you might ask, does Batman function as a gladiator when one of his hallmarks is his moral imperative against taking lives? I'm glad you asked. The bio tells us:
Gladiator Batman posed as one of these combatants with a master plan to end this bloodthirsty sport. Instead of taking part in the matches, he rallied the ranks of gladiators together in a massive uprising, leading their final escape to freedom and earning a place for the Dark Knight in ancient lore.

Pretty sweet, huh? Yup, I could actually see this happening in some crazy Elseworlds Batman story. So, do you like Batman stories about Gladiators? If so, you'd better jump past the break to read all about this guy.... 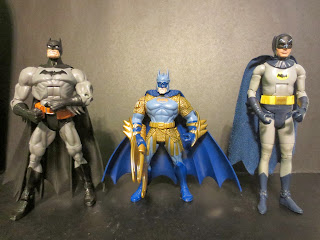 Gladiator Batman stands about 5 1/4 inches tall from the bottom of his boots to the tips of his ears. He's actually one of the few Legends of Batman figures that is standing almost fully upright.  He's a little taller than most Batman: The Animated Series toys and the figures based off of the Tim Burton films but fits in pretty well with figures from the Joel Schumacher films and later lines like Kenner's Total Justice. 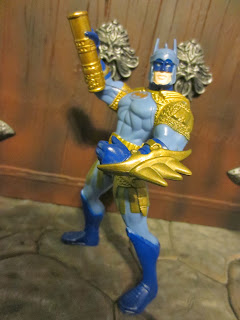 It should be no surprise that Batman moves at the standard Kenner 5- swivel hips, swivel shoulders, and a swivel neck.  It's the most classic of action figure articulation, as all of his limbs are basically straight. If you've ever held a vintage Star Wars figure, you know that means he can sit, punch, and kick straight out. One of the more interesting features of Gladiator Batman is that he's sculpted with a missile launching weapon in his hand. It's some type of firing spear weapon and the handle is sculpted into his right hand. There's no button to fire it- you just press down on the back of the spear to fire it. 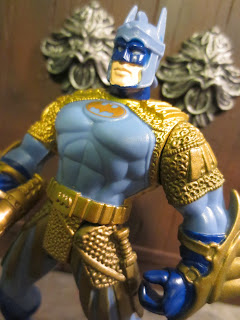 Let's move onto something more exciting, shall we? How about his sculpt. Like most of the historical Batman figures in the line, Batman is wearing a standard Batsuit underneath bits and pieces of period specific armor. He's wearing an elaborate armor that covers his back and covers his shoulders and waist. It's got the long strips of leather hanging down over the thighs and there's also a pugio in a sheathe sculpted onto his left hip. He's also got some of the most wicked looking gauntlets ever seen on a Batman figure. They're gigantic and bulky- they'd practically function as bucklers. Rather than the standard cowl, Gladiator Batman is wearing a modified version of the standard iron helmet worn by Roman soldiers and gladiators. It's a cool look for Batman, one that would be neat to see updated at some point. 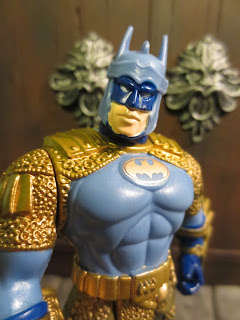 The paint is another story. It's neither bad nor sloppy, but it's a really weird color scheme. The armor's gold with the suit being light blue and the boots and gloves being dark blue. It really doesn't scream gladiator or Roman, does it? I think gray, silver, and red would have definitely been a better choice here. The color scheme here makes me think much more of a medieval knight. 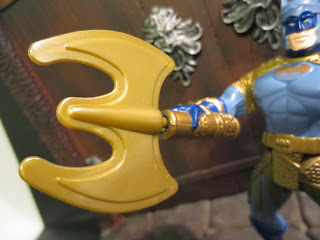 I already mentioned the spear weapon that fires from Batman's sculpted on launcher (it's vaguely bat shaped) and, like most Legends of Batman figures, he comes with a trading card, but there's one other goodie here: a removable cape. It's made from solid blue plastic and looks like a cloth cape with a chain mail shoulder piece. It snaps on and stays on pretty snugly. A sword or a shield would have been great additions, but I guess Kenner blew everything on the firing spear to appease the kiddos. 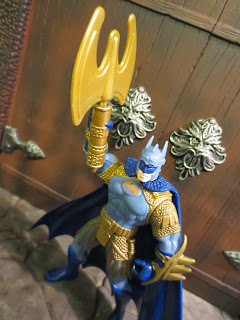 I'm all for unique Batman variants and this guy is pretty unique. I think the figure would have been much improved with a different color scheme and perhaps making Batman's suit areas the tone of his flesh to imply he was shirtless (you know, like most gladiators depicted in media) but that's water under the bridge at this point. He's a cool looking figure and a unique addition to a Batman collection. I'm giving him a Good and a 1/2 just because of his cool design and the unique concept behind him. Too bad Kenner never made an Emperor Penguin  figure or Bane as a gladiator, huh? Heck, action figures of Maxie Zeus and Carmine "The Roman" Falcone would have been appropriate, too. Heck, someone needs to create figures of those last two guys ASAP! C'mon DC Collectibles! Redeem yourselves in my eyes!