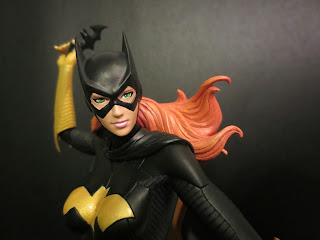 I've been waiting for this statue for quite some time and was really excited when she arrived in the mail last week from Big Bad Toy Store. I really liked the Adam Hughes styled Cover Girls of the DC Universe line and was disappointed to see it go, although I did want some statues based off of the New 52 appearances of some of the most powerful women in the universe! While not every character reboot/ relaunch/ redesign has been perfect, I think Batgirl has been quite well handled. It's great to see Babs back in action while not neglecting some of the formative events of her character that have come before. Her costume is also pretty slick as well, which is always a plus. Awesome vigilante redhead + slick outfit + statue should be a good combination, right? Right? Well, read on and learn more after the break.... 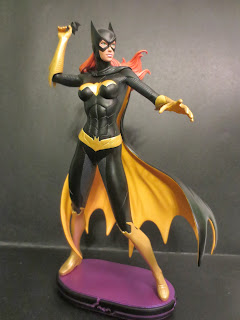 Interestingly, these statues aren't just based off of the New 52 appearances of the characters or artists that handle the characters on a regular basis, but are based off of the work of Stanley "Artgerm" Lau (with sculpting by Jack Mathews). Lau has done some great Batgirl covers and I definitely like his art, but I don't feel like this is a definitive New 52 Batgirl. That's more due to the pose and expression, however, which I'll get to in a minute. She's a little over 9 inches tall with a 3/4 inch base and she comes packaged in a windowless cardboard box with pictures of the statue. She's part of a run of 5200 statues (mine is 2765) and is made from cold-cast porcelain. 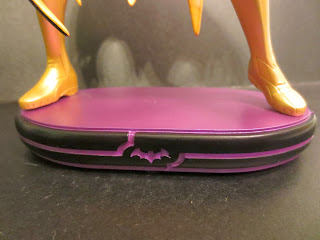 This is a statue which means there is no articulation. Batgirl does come packaged separately from her stand and I had no problem getting her attached. She doesn't wobble herself, but the stand seems a little bit too thin for a statue of this height and weight. It's only about 2 1/4 inches deep, which seems a bit concerning. I feel like if a shelf she was on experienced a good shake she might be prone to tipping over much easier than most other statues (which tend to have rounded bases). 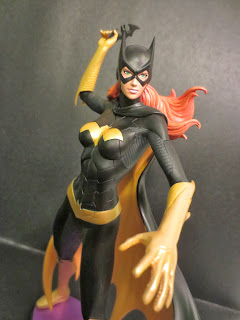 I think my biggest issue with this statue is the pose, as it's just not terribly exciting. Believe me, as a Batgirl fan I have plenty of Batgirl related art. While many female characters are probably easier to pose because they just favor sexy poses (Poison Ivy, Catwoman, Power Girl), Batgirl is a little bit more difficult. Typically she's portrayed as being a highly competent crime fighter who still likes to have a little fun with what she does, and some of the best Batgirl art and statues capture this aspect of her character. I'm not sure what Batgirl's doing here. Yes, I know she's getting ready to throw a Batarang, but she doesn't look like she's putting much effort into it, does she? What's that look on her face? Is she smiling? Gritting her teeth in determination? Squinting as the rising sun is getting in her eyes? I don't really know. I mean no offense to cosplayers when I say this (as I'll get my picture taken with any Batgirl cosplayer at any convention I'm at), but this reminds me of the kind of pose you might see someone taking in a cosplay photo on a crowded convention floor. It's just beginning to suggest something awesome while still being considerate of folks nearby and remaining an easy target for the photographer. Lau has done some great Batgirl art, so I'm disappointed this was the pose chosen to represent Ms. Gordon. When it comes down to the details, however, I'm pretty pleased. I like the cape and the hair, as it looks as if it's flowing towards the viewer. All of the details of the suit such as the various lines, armor, and under-suit look great. It's nice detail without being overdone. 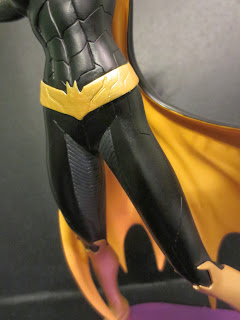 For the paint, the suit and the boots, gloves, and belt look awesome. The suit is a mixture of a matte black with the gray under-suit while the accents are gold and shiny for the most part (although a few parts of the gloves are more muted, as if representing a softer, more flexible material). She looks great. I like the colors chosen for the stand, too: the purple and black look excellent. It's just too bad that they didn't go with the purple for the interior of the cape. Yes, in the New 52 Batgirl has had both purple and yellow linings on her cape, but I think the purple just looks better. It really looks striking and helps to combat the yellow overload. I'm not going to say the yellow interior looks bad but purple would have been so much more interesting. The hair, though, definitely needed a darker wash or something. It's far too yellow orange and looks a little off to me. There's also some overspray on Batgirl's right glove near where she holds the Batarang. Fortunately, it's facing the back so most viewer's shouldn't notice it. 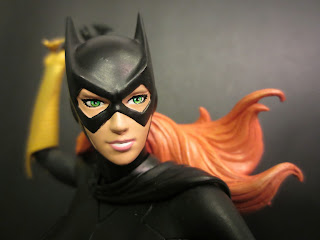 Generally, as soon as I find out about a new Batgirl product, I preorder it as soon as possible. I did that with this statue here and while I'm glad I own it, I am a bit disappointed with it. It just isn't that exciting and with a statue I tend to think that putting the character in a great pose is vital, perhaps even more so than having a solid sculpt and solid paintwork. I'm giving this statue a Good and a 1/2 - it's not bad but it could have been so much better. If the intention was to have a statue of Barbara throwing her Batarang at a target, why not really go all out and sculpt her as if she's really putting her weight back on her right leg, winding her arm back, and giving us a face that shows she's ready for business? Is there some reason she can't have a statue that shows she can be every bit the serious crime-fighter that Batman can be? That's this statue's problem- it can't determine what facet of Barbara's character it wants to express- fun or serious, and it winds up with a neutral expression that seems completely contrary to Barbara's intense and driven nature. 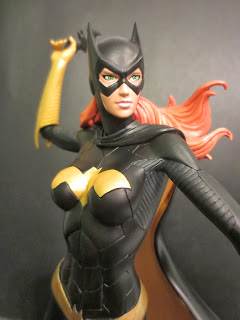 If you're interested in adding this statue to your collection, you can find it at Big Bad Toy Store by clicking here!