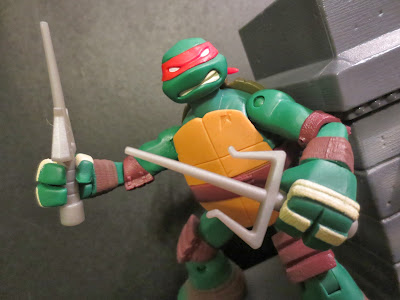 I have fond memories of the original Storage Shell Teenage Mutant Ninja Turtles figures. While Donatello was the first released (in 1990), the rest came out in 1991 and were a great way to get fairly standard versions of the Turtles again along with some great accessories. I've always loved action figures that could carry accessories in some way and these guys delivered. In the spirit of those originals, Playmates has now released the Battle Shell Turtles into the new TMNT line. Today I'm looking at Raphael, my favorite turtle and the coolest but rudest dude you're likely to meet. Before I begin the review proper, however, can I say that I'm extremely impressed with how Playmates is handling this line? While the majority of the figures fall into the average/ slightly above average category, they've put out a ton of figures and vehicles in a little over a year and they've managed to make the figures able to be found by supplying retailers with enough of them. While traveling the last week or so I think I managed to see pretty much every figure in the line released to date except for maybe April. That's pretty impressive considering most toylines these days seem to either stagnate or only make one production run of each figure. Anyways, let's get into looking at Raph.....


First things first, Battle Shell Raphael stands about 4 1/4 inches tall. He's a little shorter than the original Raphael figure. He's also a lot less detailed. I think Playmates tried to go with a style on these figures that more closely matches the animation of the Nickelodeon cartoon but while I love the cartoon, I'm not necessarily digging the more stylized/ less detailed look, especially in comparison to the standard Raphael figure.  He's got much flatter details with smoother skin and larger feet with a smaller head. He'll fit in just fine with the rest of the figures, but he's not a visually appealing as the first releases. 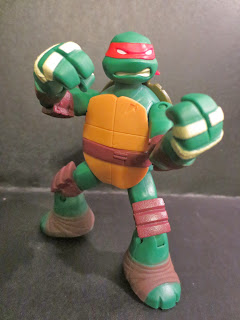 The articulation is pretty much the same as the original Raphael (peg/hinge knees, peg/hinge hips, peg/hinge shoulders, peg/hinge elbows, swivel wrists, a ball jointed head) with the addition of the hinged shell. Raph can take plenty of fun battle poses and hold most of his weapons in a convincing manner although his ball jointed head's movement is pretty restrictive. 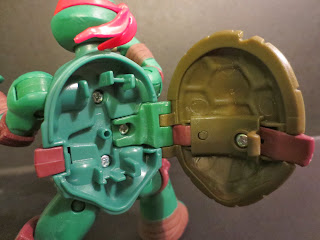 The shell swings open from the side and has storage spots for Raph's shuriken and two half sai. Both the shell and the figure feel nice and sturdy, so no concerns about breakage here. 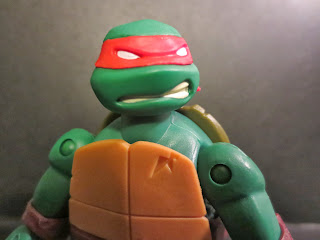 I'm assuming that most of you reading this either own or are familiar with the first Raphael figure released last year in the TMNT line so I'm going to be making a lot of comparisons between that figure and this one. At the most basic level, these two guys are pretty similar and feature the same bits and bobs. It's the execution of those elements that differs. First, let's talk about the body and skin. While the first Raph was very textured all over, this guy features smooth skin with the only details being on the bottom of his feet. The toes are much shorter and suggested rather than being detailed and pronounced like earlier Raph. His shell and chest are also smooth with a less prominent crack on the front. The knee and elbow pads are more square and pronounced, but do look pretty cool. The belt is pretty much the same as the first version. The head is going to be the biggest indication of the differences in this figure from it's predecessor; it's smaller, doesn't feature the pronounced and detailed teeth, and it quite smooth and much closer to the CG animated look of the series. It's not awful, but it's nowhere as good as the figure that was released last year. 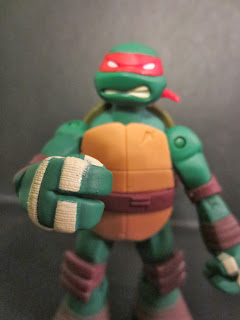 The paint's also a good bit weaker. While most of the figure is molded in the appropriate colors (Raph still has the deep green flesh tone here), painted elements such as his ankle bands, wrist bands, and knuckle wraps feature some really sloppy edges. The other pieces, such as the belt, knee and elbow pads, and bandanna, are all separate pieces molded in the appropriate color. The painted on eyes and mouth are clean and neat, but with all of this effort to make the figure look like the animation, why not include pupils? I know the Turtles' pupils disappear during combat, but it still would have been a nice feature. 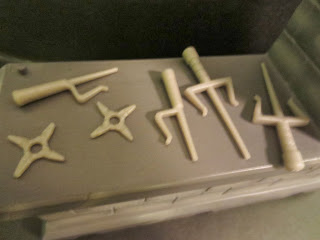 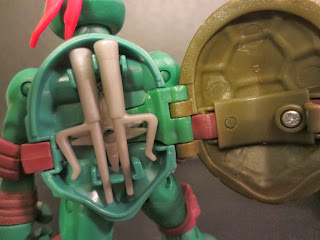 Battle Shell Raph doesn't come with as many accessories as the first figure, but he does have the cool opening shell to help offset that. He comes with his two sai, two half sai, and two shuriken. The regular sai are almost the same as those that came with the original figure (they're a bit thicker), but the half sai are only about half the size of the previous half sai, allowing them to fit into the shell better. The shuriken are new and feature a nice sculpt and a hole in the middle. The weapons are molded in a light gray plastic and are nice and durable. I am disappointed, though, that because the sai are thicker and Raph's fingers less pronounced, he can't hold the sai with the blade between his fingers anymore. Cool feature and nice to see some new accessories, but that aspect has me a bit disappointed. 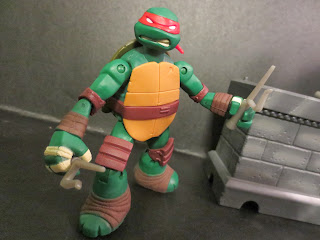 As a TMNT fan since the original toyline, I'm always happy to see nods to it in what Playmates is doing here. I was really excited about the idea of the Battle Shell Turtles, but I find the execution to be rather disappointing. I love the opening shells and how neatly everything stores inside, but I can't help but feel that everything else is a step back from the figure we got last year. A simpler, less impressive sculpt, smaller size, worse paint, and fewer accessories. I'm not sure the trade off for an opening shell is enough to warrant the faults here. TMNT figures are always fun, but I don't really see myself needing this figure for any reason when I already have my previous Raph. The Ooze Throwing Turtles and the Stealth Tech Turtles really brought something new to the table. These guys, though, I'm just not sure. I'm giving Battle Shell Raphael here an Eh and a 1/2. Completists and kids looking for a more basic Raph that matches the cartoon will be pleased, but people happy with their previous figure really need not apply. Sorry dude.