Action Figure Review: Plundor from Masters of the Universe Classics from Mattel 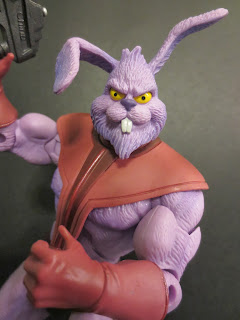 "Quest for He-Man", one of the first season episodes of the Filmation animated series He-Man and the Masters of the Universe, is absolutely insane. It involves He-Man getting mindwiped by Skeletor and being magically sent to the plant of Tranus, a pollution covered world where an evil rabbit named Plundor lives in a giant fortress that looks like it wouln't be out of place at Krustyland. Oh, and who is sent to save He-Man? Ram-Man, Orko, and Cringer. Yup, no way that could go wrong! It's a fun but really weird episode that's most famous for the villainous pink bunny Plundor (voiced by John Erwin). Interestingly, Plundor is not part of the Club Filmation subset of Masters of the Universe Classics but a release in the main line. Interested in a pink bunny for this Christmas that isn't Ralphie in his pajamas? Then read on to learn more about Plundor, after the break.... 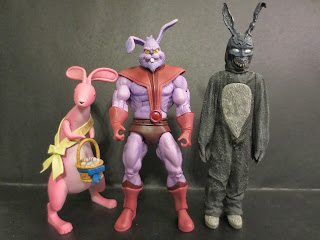 Plundor stands right at 7 inches tall (7 3/4 inches if you count his left ear that stands up more) and, as is par for the course with MOTUC, reuses many parts from previous figures. He features the standard hairy body, arms, and legs, the Zodac boots, and gloves that appear to be reused from a few other characters (although they have hairy wrists, so maybe they're retooled a bit). While Plundor is a character that only appeared in the Filmation cartoon, I think that the style of his sculpt fits in well with the MOTUC aesthetic. The design of the character (giant pink rabbit with crazy yellow eyes) is pure Filmation, but the Four Horsemen definitely made sure that he'll fit in to your collection, as long as you're cool with giant, evil, pink bunnies. I most certainly am, so I'm all good here. 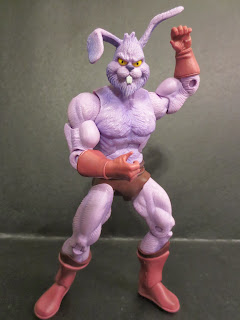 Nothing too unusual for articulation here: hinged ankles with limited lateral rocking, boot swivels, hinged knees, swivel thighs, swivel/hinge hips, swivel waist, hinged abdomen, swivel/ hinge shoulders, swivel biceps, hinged elbows, swivel wrists, and a ball jointed head. Everything is solid and secure, which means I've went through this entire year without any major MOTUC quality control issue that I can think of. Excellent! Interestingly, due to the way his briefs are designed, Plundor has a wider range of hip articulation than most other figures. He can sit much easier than most other characters, meaning he looks great on the Grayskull throne. You know, if for some reason you want Plundor chilling out there. 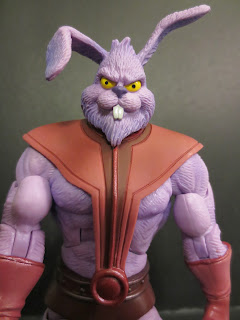 Since Plundor mostly reuses former pieces there isn't much new to talk about; the body is appropriately furry and the boots and gloves match his Filmation appearance well. The new crotch piece is a very simple set of leather briefs with a metal belt that exposes far more of Plundor's hip joints than we've seen with any other character in this line. It doesn't look bad, but I thought it worth noting. I like the decision to redesign Plundor's "shirt" with a great more detail than the character's Filmation design, which was extremely plain. The leather looking outfit has some unique ridges and seams around the edges and features a decorative piece at the bottom. This was a good decision in helping to translate the animated appearance into the line. Last, I'll talk about the headsculpt. Yes, it's as goofy as a chihuaha in swim trunks and oversized sunglasses riding a skateboard through the Mall of America, but darn it, it's kind of charming, too! It's a bizarre juxtaposition of a silly pink rabbit with buck teeth and a demented rabbit with yellow eyes and crazy, lopsided ears. When you stare at the figure for awhile, I think you'll come to see that there is a real menace in the sculpt that reveals itself over time. 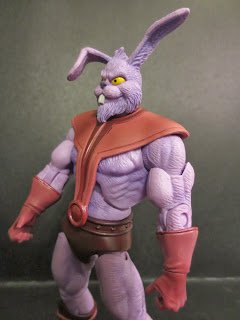 Plundor's not quite just pink as there look to be some other colors mixed in there, too. He's almost got a bit of lavendar in there. There's a bit of a wash that adds some depth to the figure and really helps sell this guy. The details on the head like the buck teeth, nose, and yellow eyes look really good and bring out a lot of character in the sculpt. The armor and clothing are pretty plain with a mixture of light reds and reddish brown, although the metallic red highlights look good. 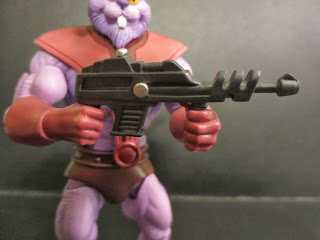 Plundor's vest/ shirt/ collar/ is removable when you remove his head and he also comes with two additional accessories: a repainted version of Webstor's gun and Skeletor's Filmation axe. I really like the gun as it's repainted with a nice, dark gray color scheme with silver bolts and is very sturdy. It's a pretty basic accessory, but one that works for both Plundor or any other character needing a laser rifle. 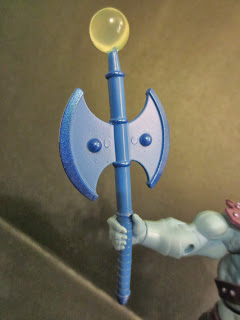 Skeletor's Filmation axe is a far more interesting accessory, but one I like a great deal less. Appearing only in the pilot episode of the Filmation cartoon (The Diamond Ray of Disappearance) the axe seemed to be an early stand in for the Havoc Staff. Perhaps the Havoc Staff was considered to be too occult looking initially? Anyways, in the episode Skeletor can shoot energy beams from the magical orb on the top of the axe and a few times he even carries it like a staff. The axe included here looks to be a blend of the Filmation design with the blade shape of the toy axe that came with He-Man. It's a bit more detailed than the Filmation design, featuring some details on the blade such as metallic blue edges and some studs. The translucent orb unfortunately has some blue paint slop on it. The weapon's also really floppy. The plastic is soft and rubbery and droops, a feature not endearing for an ornate weapon. 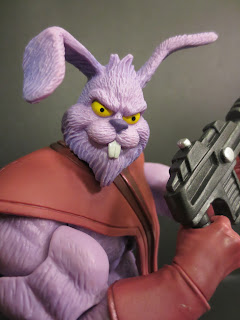 Overall, I imagine I like Plundor far more than many other fans do. I actually like him far more than I anticipated I would. He's just so delightfully demented and creepy and feels like he fits into the subgenre of other creepy rabbits like Robbie the Rabbit from Silent Hill, Frank the bunny from Donnie Darko, and Bunnicula (whom my wife apparently dressed up as for Halloween one year). The Four Horsemen did a really good job of integrating the Filmation design of the character into the MOTUC style here, creating an interesting looking MOTUC villain that definitely stands out from the pack. I do wish his accessories were a bit more exciting, but overall Plundor is a solid figure. I'm giving him a Great rating here, as he's definitely worth as look for those MOTUC or action figure fans wanting something a bit...strange.


Need a Plundor of your very own? Head on over to Big Bad Toy Store and pick one up today!