Action Figure Review: Radagast the Brown from The Hobbit:The Desolation of Smaug by the Bridge Direct 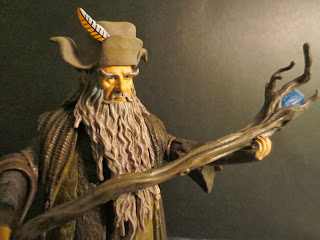 I was a pretty hardcore completest of Toy Biz's excellent and expansive Lord of the Rings toyline and had always hoped that they would strive to create some figures based off of Tolkien characters who weren't seen in the film such as Tom Bombadil and Radagast the Brown. I was pretty thrilled when I learned that Radagast the Brown would be in The Hobbit: An Unexpected Journey and was even more excited when I learned that he was to be played by the Seventh Doctor, Sylvester McCoy. While a bit silly and over the top at times, I liked McCoy's portrayal of Radagast as a member of the Istari who truly was more concerned with the world of beasts than the world of men. He had a great costume and really brought life to a character that got omitted from Peter Jackson's  The Fellowship of the Ring. The Bridge Direct has put out some nice product for The Hobbit films, but it hasn't seemed to be as hot of a property as hoped for. All of the Desolation of Smaug product is exclusive to Toys R Us and I was incredibly excited to find Radagast the Brown there last week. Whether you're a fan of the The Hobbit or are simply bolstering your Toy Biz Lord of the Rings roster, you should be pretty satisfied with this resident of Rhosgobel. More after the break.... Radagast the Brown is about 5 3/4 inches tall. While the Bridge Direct figures seem a little shorter than the Toy Biz figures, most characters still fit in OK. Radagast still appears to be taller than Hobbits and Dwarves but on the short side when compared to men and his fellow Istari, so he should be OK. The style is quite nice with a realistic look that meshes with the figures from the previous films. 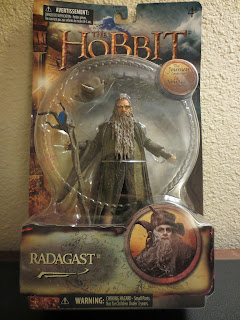 I'm really impressed by the packaging as it's quite beautiful. I don't really take pictures of packaging often but I did with this one. 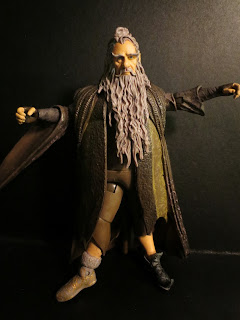 Radagast is pretty well articulated, much more so than you might suspect at first. He features: swivel/ hinge ankles, swivel hinge knees, swivel hinge hips, a swivel waist, swivel/ hinge shoulders, swivel/ hinge elbows, a swivel left forearm, a swivel right wrist, and a ball jointed head. That's quite a bit of articulation! Unfortunately, due to his robes, which are made from a very solid plastic, there's not a lot of movement you're going to be able to get from the legs. It's helpful for getting him to stand but not much else. The arms also are slightly inhibited by the edges of the robe and the fact that the right sleeve has a long arm sleeve that's hard plastic and looks funny in different positions. The head also doesn't move much due to his long hair and long beard. I'm not too disappointed because all I really need Radagast to do is to talk to birds, stand at the White Council, and eat mushrooms, but a softer robe would have been quite helpful. 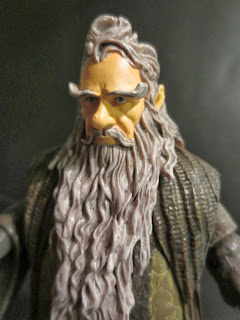 The sculpt on Radagast is exceptional. The head sculpt easily competes with the best of what we see from companies like NECA, DC Collectibles, and Diamond Select. Even through the wild hair and bear, mustache, and massive eyebrows, you can still see the likeness of Sylvester McCoy here. The robe is also very elaborate with multiple textures and patterns sculpted into it. It's also extremely asymmetrical as the hem and sleeves are not the same, nor are the shoes. Radagast's right shoe is an elaborately embroidered boot with a furry collar while the left is a pointed and rugged elf-like shoe. Underneath the robe is a flat body with no detail, but unless you're peeking under Radagast's robes, you wouldn't notice. Any why would you be doing that? Perv. 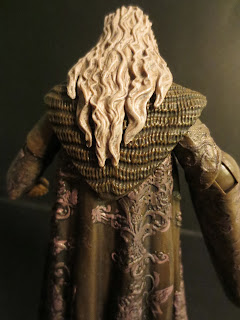 The paint work is also well done. I'm loving the variety of washes and shading on Radagast's hair and beard as well as on his cloak. He's even got some different colors in his skin and some drybrushing to give him a rugged appearance. Check out the gold details on the front of his robe, the pinkish red leaves on the back of his robe, and the patch of white on his hair (it's supposed to be bird droppings). The Bridge Direct really did an exceptional job and certainly presented some of the best paint work in this scale that I've seen this year. 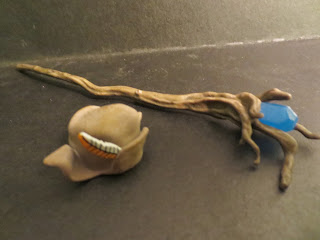 While he only comes with two accessories, they're both significant and well done. First is Radagast's hat; it's a floppy, misshapen hat with a very colorful feather in it that looks excellent on him. It manages to look great and stay on his head securely, something rarely accomplished in this scale. Second is his staff. It's a gorgeous sculpt with a great texture and plenty of knots. There's also a dark wash on as well as a translucent blue gem at the top. It's absolutely fantastic and can be held in either hand. I'd have loved to see something else, but with accessories of this quality I'm not complaining. 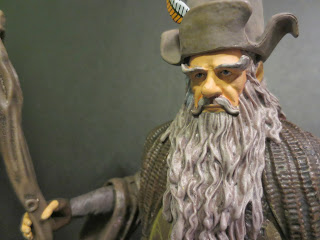 Radagast is really an excellent figure. While you probably won't have much use for his lower body articulation, everything else is just incredible. I'm very impressed by the effort the Bridge Direct put into sculpting and painting this figure and haven't seen many figures available at regular retail that match this in quality. I really hope that collectors snatch these up so that we can get more characters in the future in the 6 inch scale. I also hope we see more work from the Bridge Direct, as they seem to be doing a great job in both the 1/18th scale and the six inch scale. I'm giving Radagast the Brown a Great and a 1/2. I'm not sure I could have asked for more in a Radagast figure and I'll gladly add him to my Lord of the Rings collection.