Lego Review: Dol Guldur Ambush from The Hobbit:The Desolation of Smaug by Lego 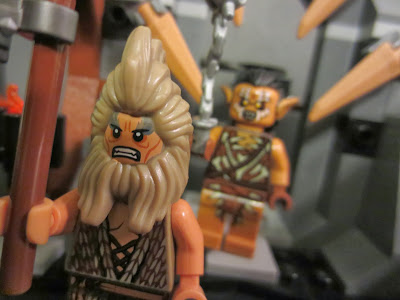 I have to admit that the prospect of seeing the Necromancer (played by Benedict Cumberbatch) battle Gandalf in The Hobbit really excited me. It's one of those details from the book/s that has always appealed to me and I'm excited to see the scene come to life. In their new series of The Hobbit sets Lego has dedicated two sets to a battle that takes place at Dol Guldur. The larger set is called "Dol Guldur Battle" and features the ruins of the fortress proper along with Gandalf, Radagast the Brown, and the Necromancer himself; it definitely appears to be the "flagship" set for this series. Today's review is the smaller set "Dol Guldur Ambush" and is designed to attach on to the larger set. It's a neat feature that expands the other set (which I should get around to reviewing later this week) and adds not only a few more traps to Dol Guldur but also gives builders two more orcs and Beorn, the oft neglected character who can turn into a mother flippin' bear. That's right. A bear. Ready for a look at the Dol Guldur Ambush? Then join me after the break.... 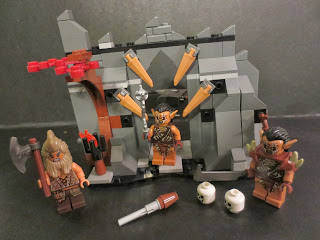 The Dol Guldur Ambush is made up of 207 pieces and includes three minifigures: two Gundabad Orcs and Beorn. It represents a smaller section of the much larger fortress and features a few working traps, some weapons, and two skulls. It seems to retail for around $20 although a little shopping around might get you a better deal. Lots of dark grey and light grey pieces here as well as some cheese slopes and a few of the etched 1x2 bricks. 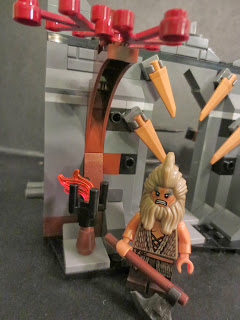 I've always loved Beorn and I'm really excited to see how his role plays out in The Hobbit: The Desolation of Smaug. The Beorn minifigure is really well done with a very detailed body print and a fantastic headpiece. The head and hair are actually one solid piece. Beorn is equipped with an axe.

From this section of the set you can see the torch that sets outside of Dol Guldur. There's also a tree that has grown into the wall of the ancient ruins. I love the red leaves used here- it definitely gives the set a much more mystic and forbidding aura. If you look on the left, you can also see the Technic pins that allow this set to attach to the larger Dol Guldur set (which I'll be reviewing soon, as well). 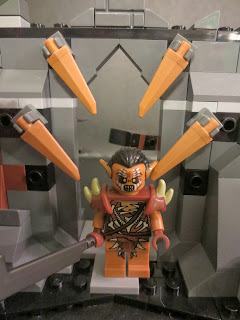 The set comes with two Gundabad Orcs. Their pointy ears and long hair are accomplished through a hair attachment. Both orcs share the same body, hair, and head, but this guy has a boney piece of shoulder armor that fits over his neck peg. He also comes with a wicked looking schimitar.

Standing at one of the entrances into the fortress at Dol Guldur, you can see the teethlike protrusions that hang down from the entryway. These nicely give the fortress an ominous feel that implies visitors to the ruins will be devoured, almost as if the fortress is something ancient and alive. 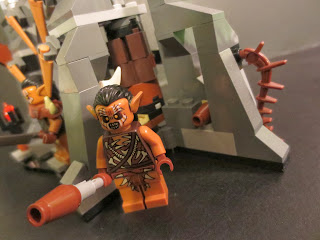 Here's the second Gundabad Orc. He's carrying one of the extra missiles that fires out of the wall. He's standing along the right side of the playset and you can see that the corner folds out to unveail some little interior crevices and a firing missile. I have no idea what Lego's obsession is with missiles is about on some of the Lord of the Rings sets, as it makes little to no sense, but it's here. I'm more impressed by the withered brown vine hanging down. 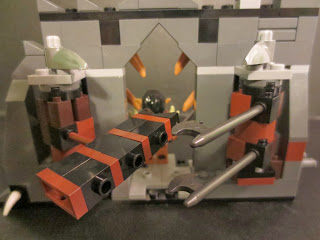 The back of the set is displayed here and it shows what happens when you walk the door unprepared. On the right is a spinning column that swings two long axes at unaware visitors and the left features a giant hammer. While the set is largely built around these two play features, I've always loved traps and playsets that featured them. This really reminds me of some of the ruins you encounter in Skyrim. 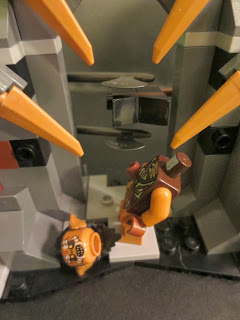 Oops. It looks like this Orc lost his head. This little trap really reminds me of the first trap at the end of Indiana Jones and the Last Crusade when the first guy goes into the tomb and his head ends up rolling back out. When I saw that scene for the first time as a kid it scared me so bad that my teeth were literally chattering. Now I'm recreating the scene in Lego bricks. Eh, whatever. 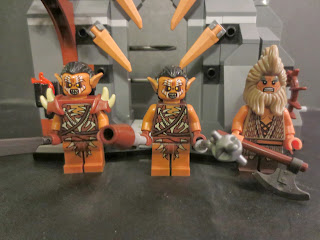 I really like this set because of the traps, the minifigures, and the way it adds onto the larger Dol Guldur Battle. It's not the best build but it's certainly useful for me as my primary Lego display is a giant haunted town with a massive castle on the outskirts. Combining elements from the Vampyre Castle, Helm's Deep, and other Lego castles along with elements from the Mines of Moria set has given me a pretty awesome castle with an exciting interior and exterior. As a standard build by itself, it's easily a Great set. Some fun play features (other than the pointless missile launcher) and three nice minis all for $20 or less. This may also be your only chance to get Beorn, so you'd better jump on it if you're into guys who turn into bear.