RoboCop 3.0 from RoboCop by Jada Toys 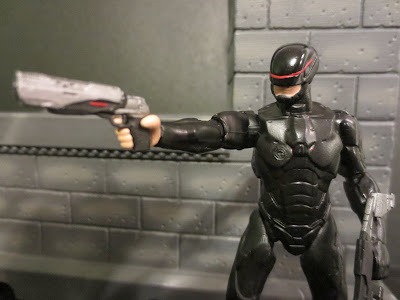 I'm pretty excited for the new RoboCop film that slated for release on February 12, 2014. While I absolutely adore Paul Verhoeven's original film and consider it a classic, it also is a film that I feel is a good candidate for a remake. Considering the cast that director Jose Padilha has assembled (Gary Oldman, Jackie Earl Haley, Samuel Jackson, Michael Keaton, Abbie Cornish, and Miguel Ferrer) I have high hopes that the new film will be a worthwhile remake that brings a lot of new idea to the table. Today I'm talking about toy, however, and I was actually quite surprised to stumble upon these at a Toys R Us just the other night. From Jada Toys (a company I don't think I've ever heard of) we have a few figures based off of the new film in a variety of scales. There seems to be two 4 inch figures, two 6 inch figures, and some larger stuff like a remote control RoboCop on his motorcycle. I opted for the 4 inch 3.0 RoboCop that features his slick new outfit. I would have grabbed the 6 inch figure, but the figure literally has no lips sculpted onto the face which just looks really, really weird. Is this a worthwhile addition to the ever growing stable of great Robocop toys or is this a forgettable version of Detroit's favorite son? Read on and find out after the break.... 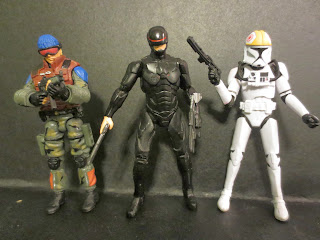 RoboCop 3.0 stands about 4 1/8th inches tall, making him work in scale pretty well with most modern G.I. Joe figures and Marvel Universe. Remember, he's a little taller than your average civilian. He's not super realistic or anything, but he's not overly stylized or cartoonish either. I'd compare him to the Terminator: Salvation figures, which is probably a bad sign already. I really like the card he packaged on, however. It's red and black with the metallic RoboCop logo across the top. It definitely stands out on the shelf. 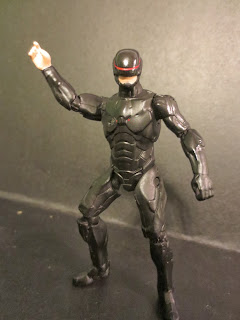 RoboCop isn't typically the most mobile guy, but ol' Murphy here has a few more joints than I originally suspected. He features: peg/ hinge knees, swivel thighs, peg/hinge hips, peg/hinge shoulders, peg/hinge elbows, and a ball jointed head. The elbows don't have the greatest range of motion, but the knees, shoulders, and head are quite welcome. The hips are a bit stiff and concern me a bit because it's hard to see the joints due to RoboCop's thigh armor. You can't tell if you're properly moving the joint or bending it, which is a bit concerning. Still, not bad for a figure that only cost me $6.99 at Toys R Us, a store that typically is a dollar or two higher than most other places. An abdomen joint would have been welcome, though. 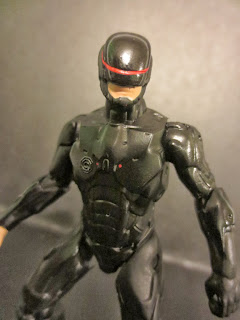 There are some things I really like about this sculpt and some things that I find to be incredibly amateur. I'll start with a positive: the body armor looks pretty good. It features a lot of nice detail on the front and back that while a bit soft, does seem to capture the look of the armor from film stills. The little OmniCorps logo is even present on the chest, which is a cool little detail. What I don't like, however, is the head. It's an extremely flat sculpt with little to no extra detail. I know the new helmet is kind of minimalistic in design but I can't help feel that the head sculpt here looks like something that I'd expect to see on a dollar store toy. It's just plain with a mouth that's barely discernible.The right hand is also really wonky looking. 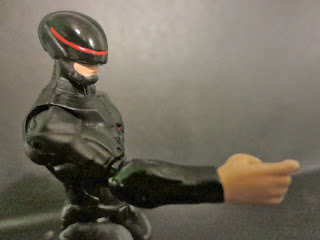 If the paint work were better, I could get by with this figure but alas some of the paint is pretty shoddy. There's not much of it and what's there is barely passable. The red on the visor is not bad, but the helmet and the jawline don't have a very clear separation. The same problem occurs on the right hand. I do like the mixture of matte black and shiny black on the suit, however. 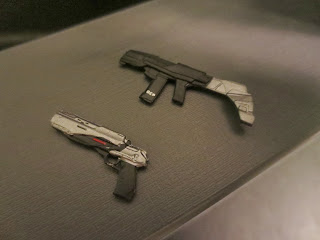 RoboCop comes with two accessories and they're actually quite impressive. His standard massive pistol fits in his right hand and really has an intricate sculpt. It also features a few different paint applications. I really like it. The second weapon is a submachine gun with a stock. It's molded in black with a silver stock and the letters "DCP" stamped on both sides of the clip. It fits in Robocop's left hand, but it's tough to get in there because the gun is pretty rubbery. It stays in securely once you equip it, though. It's nice to see that RoboCop comes with two weapons, both of which have great sculpts and excellent paintwork. 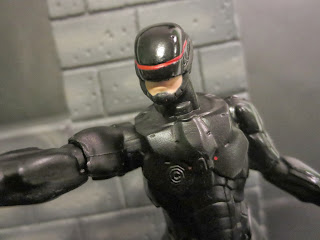 I'm really conflicted on this figure. He's got a nice armor sculpt, some fairly decent articulation, and two good accessories, but the paint and headsculpt leave a lot to be desired. I think I'm going to go with a Good here. This isn't a bad figure, but it's just not as great as it could have been. I'm really interested in how Jada Toys got this license as opposed to someone like NECA and what the thought process was behind this line. It's over two months before the movie is released and I've never thought of RoboCop as a particularly kid friendly property (even though he had a Saturday morning cartoon and a Kenner toyline back in the late 1980's), so it's interesting that Jada Toys seems to be trying to get in on the kiddie market before Christmas. With all of the great RoboCop figures put out by NECA, Hot Toys, and Figma, Jada really had the deck stacked against them. I hope at some point NECA manages to get the license to crank out a RoboCop or two because these guys definitely aren't going to appeal to more discriminating collectors. Still, I'm sure G.I. Joe and 1/18th fans with a little talent will have some fun working the figure into their collections. Oh, an one last word for the kids: "Stay out of trouble."

While Big Bad Toy Store doesn't have any of the Jada Toys RoboCop figures in stock, they've got lots available for sale and peorder from NECA, Hot Toys, Figma, and Play Arts Kai. Check them out here.