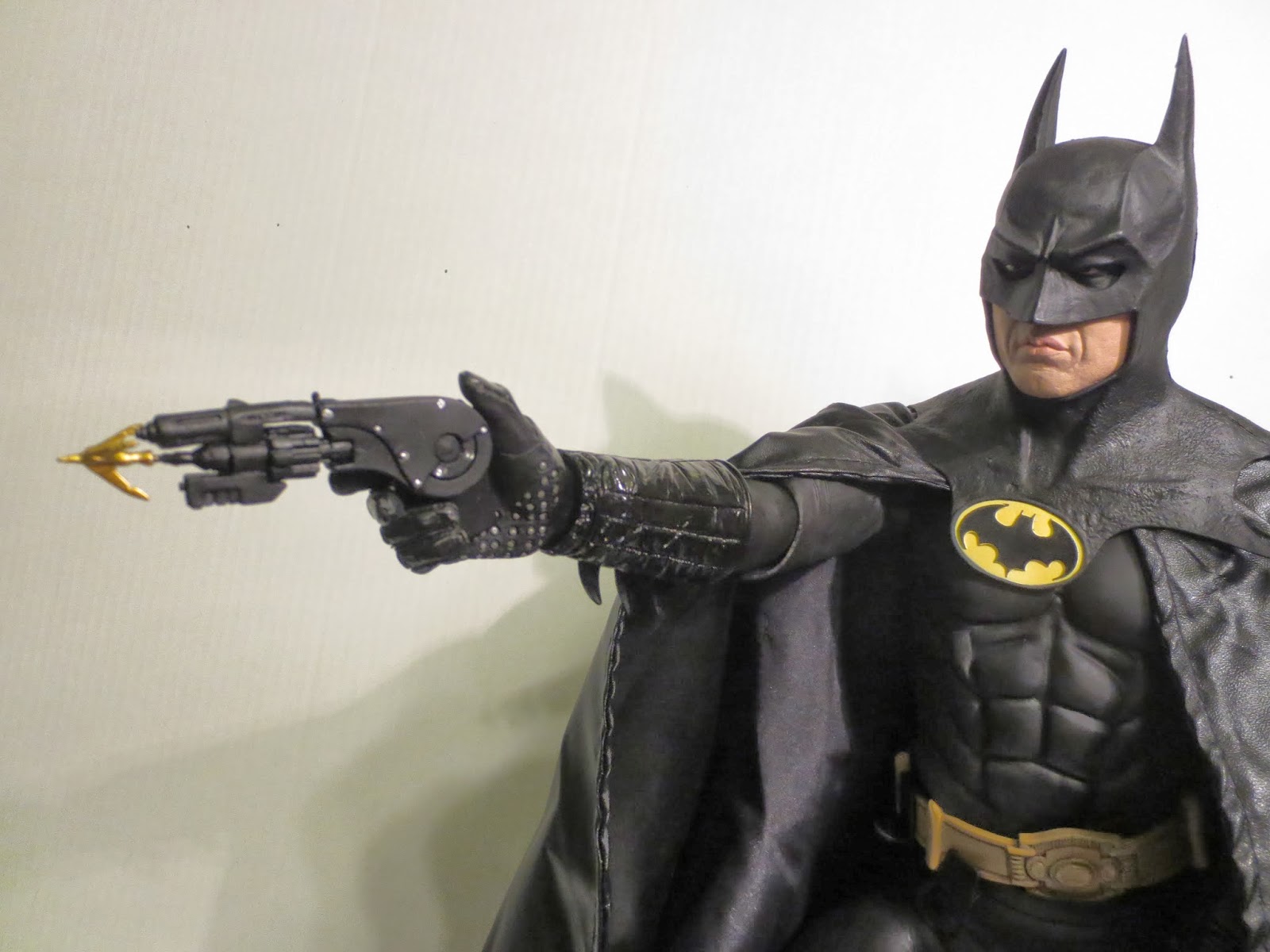 While I liked Batman as a kid and remember having Batman and Robin pajamas, I don't think the character really ever caught my attention until the 1989 film was released. That was huge. Maybe it just me looking back with Nostalgia Goggles but it seems like everything in the world revolved around Batman when that movie came out. Batman and the Joker were everywhere. Batman cups and cinnamon twists at Taco Bell? Batman cereal? Commercials for the film non-stop? There was nothing that existed that made me want to not see this movie. Well, except my parents. For reasons I can only speculate to my therapist, no one took me to see Batman. Oh, I had the trading cards and read them over and over (trading cards told stories back then), but I didn't see the film until either TV or video. Here's a list of lame movies my parents took me to in 1989 instead of Batman: Honey I Shrunk the Kids, Prancer, and She-Devil. Yup. At least we saw Ghostbusters II and Field of Dreams in theaters. Anyways, that's really neither here nor there; my parents certainly have made amends by continuing to buy me plenty of Batman toys, comics, and novelties every year for Christmas. My college graduation also had a Batman pinata. They also took me to Batman Returns. My parents and I are square now and I'm here to talk about NECA's 1/4 scale Batman based off of Michael Keaton's Batman in the 1989 film. Ready for a review of a behemoth of a figure? Then join me after the break... 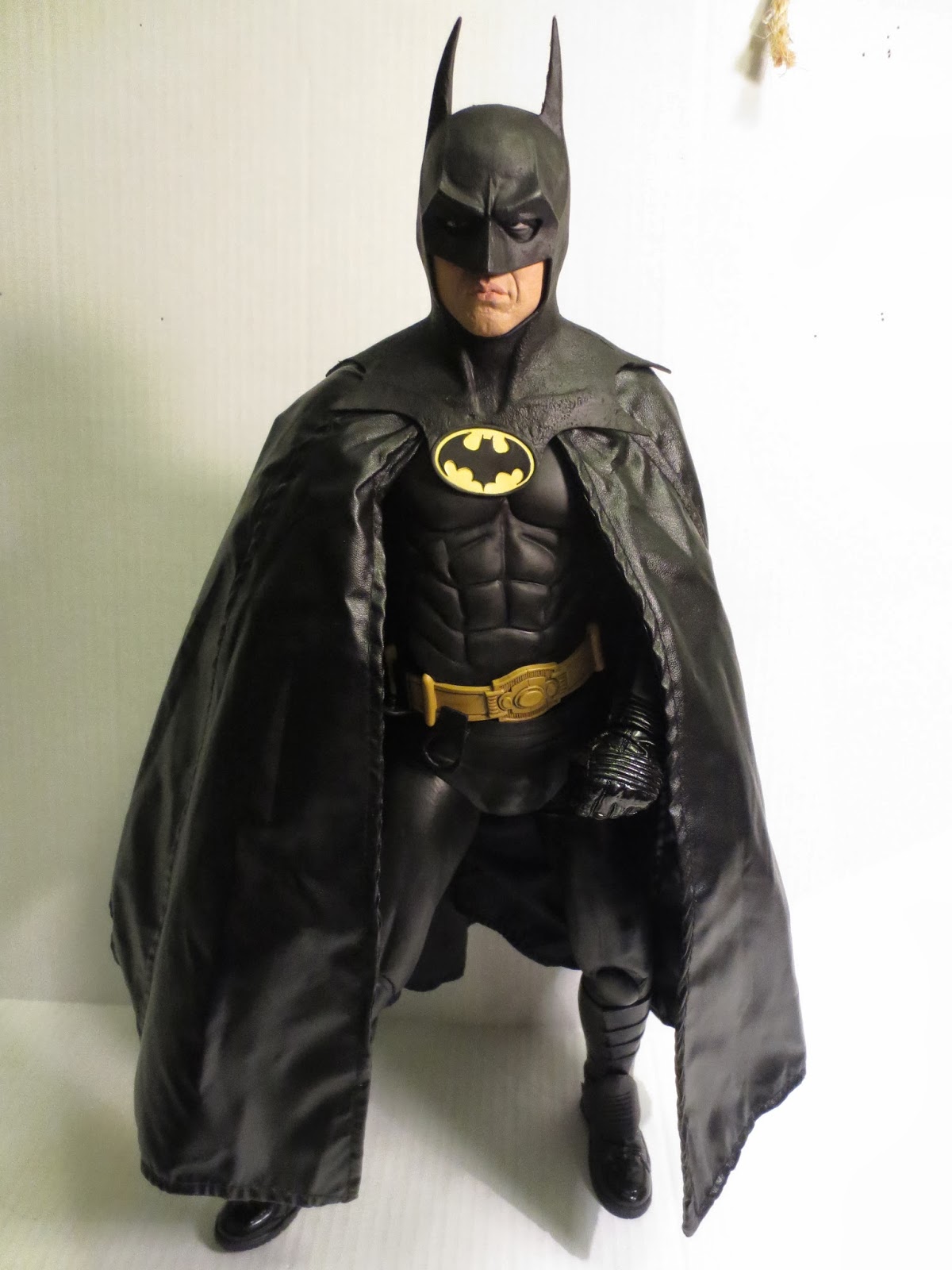 Being in quarter scale, Batman is just a little under 18 inches tall. If you're not not a regular collector of quarter scale product, you will definitely be shocked by how amazingly large the box and the figure within it are. It's truly massive! The figure is sculpted in a nice, realistic style that accurately reflects the source material. Imagine your standard NECA movie figure enlarged; that's pretty much what you should expect here. 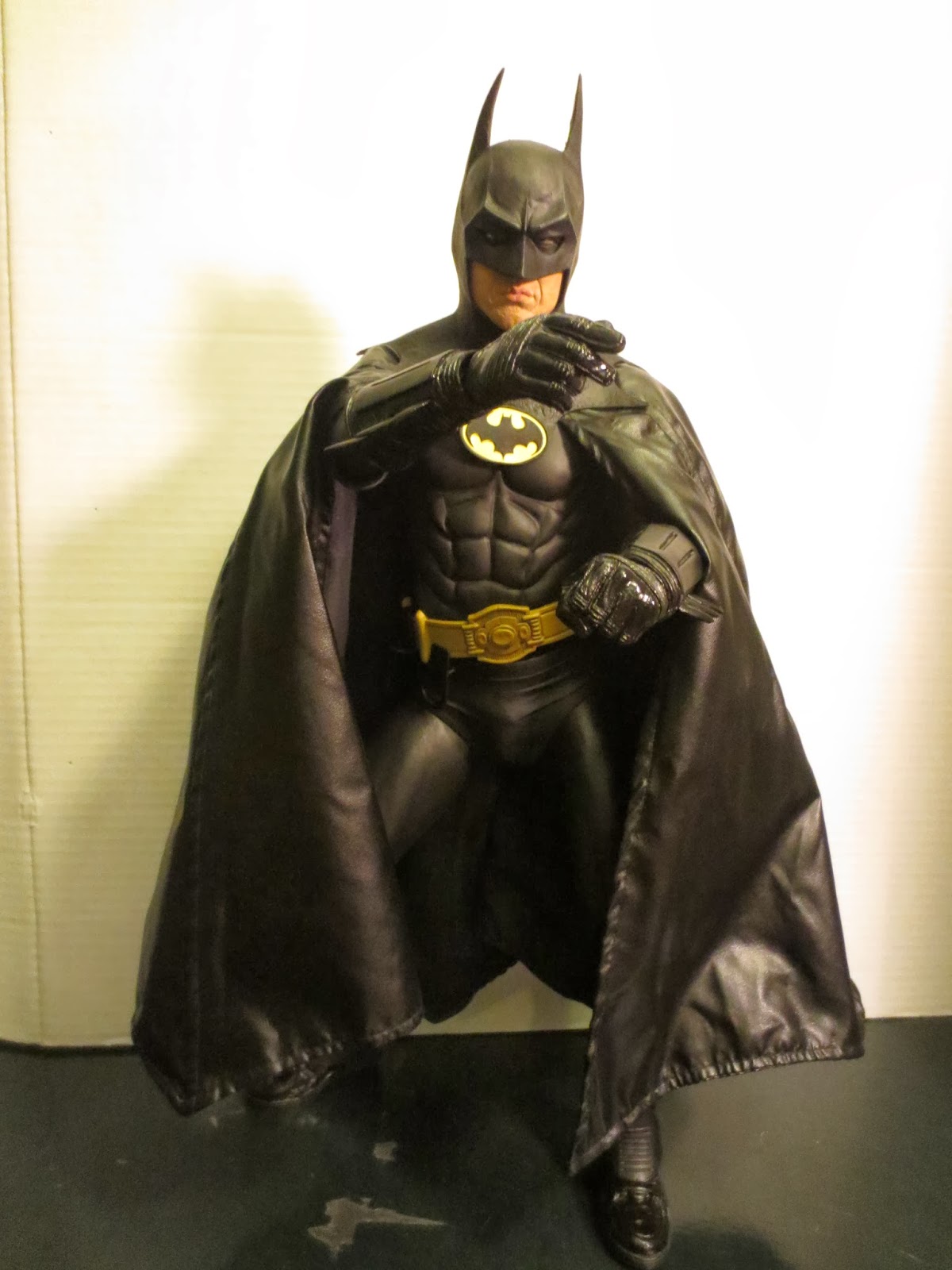 This isn't just a statue as NECA worked in quite a few points of articulation which should allow you to get a few decent poses out of the figure. Batman has swivel ankles, swivel/hinge knees, ratcheting swivel/hinge thighs, a swivel waist, a ball jointed torso, swivel/hinge shoulders, swivel/ hinge elbows, swivel forearms, swivel/hinge wrists, and a ball jointed head. While the figure is smartly molded in a softer plastic that keeps the joints from feeling fragile or brittle, I'm not completely satisfied with the range of motion in all of them. The knees, thighs, shoulders, elbows, forearms, and wrists are fantastic and really will help you to do some nice, dynamic poses with Keaton's limbs, particularly as he is interacting with his gadgets. It's important to remember to Keaton's Batman was not particularly agile; he had a slower, imposing presence that was in part due to being restricted by his suit. While I wish the waist, torso, and neck joints gave us a bit more motion, that wouldn't be particularly be authentic to the character. He's not super mobile, but I'm not as disappointed with this as I would be if this were an Arkham City or Dark Knight Rises Batman figure. 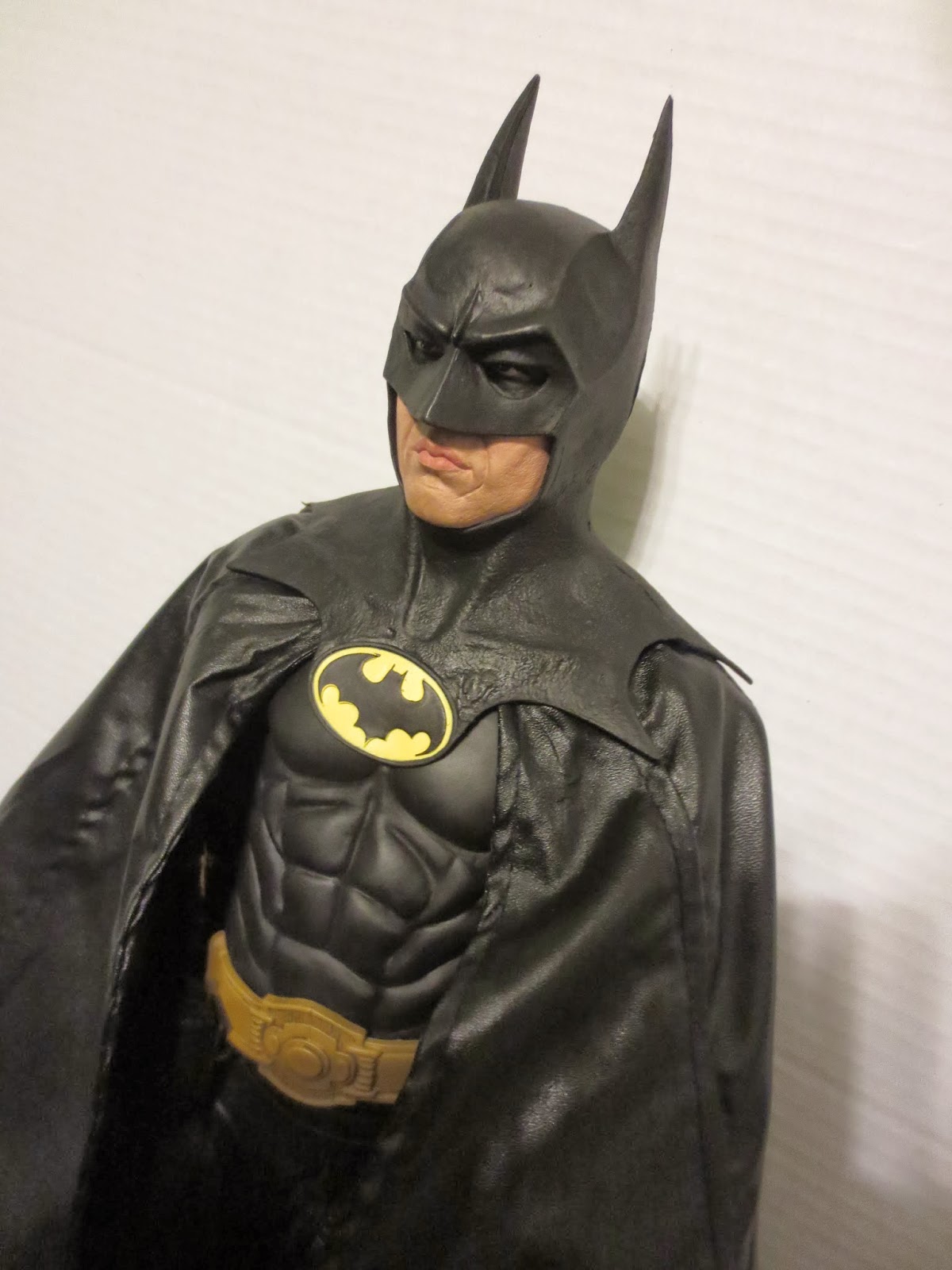 When you look at this, I don't think there's any doubt that you could mistake this for anything but Michael Keaton in the Batsuit from 1989's Batman. NECA did an absolutely fantastic job of translating the screen version of the character and costume into a large and intimidating three dimensional action figure. My general impression is that I'm really, really happy with the way it turned out, although there are some weird issues with the way the outfit is segmented. Unlike the Hot Toy figure, this isn't a standard articulated figure wearing a softer Batsuit; it's essentially an articulated Batsuit. That means that the look of the armor by necessity is less cohesive and more segmented. From time to time, you'll notice things like the way the chest armor is split into pieces to allow for the torso articulation. At first this seemed like a bigger deal to me but the more you pose the figure and find great ways to utilize the cape, the happier you'll be. 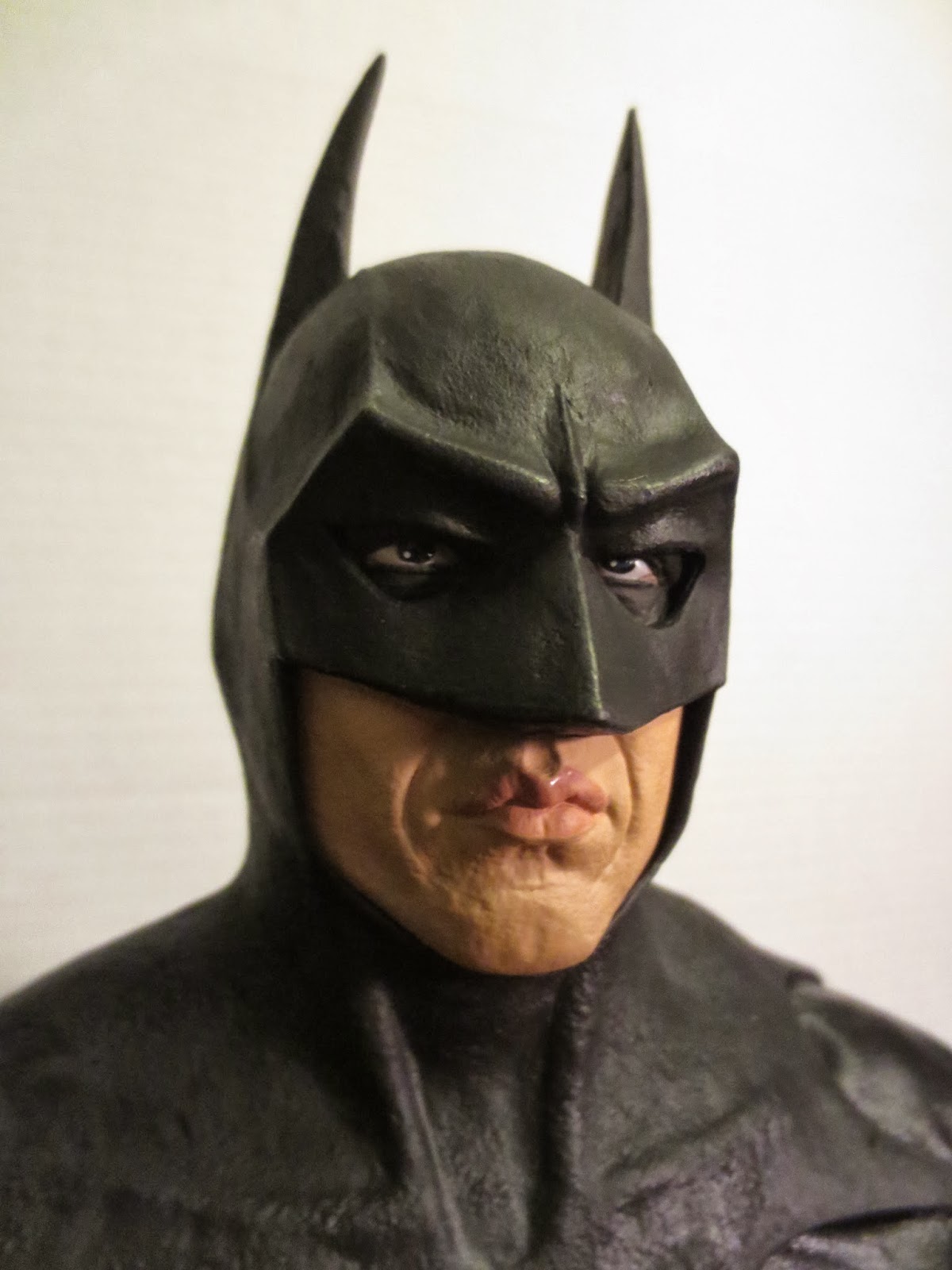 The head sculpt is excellent. Looking at this, there's no doubt this is Michael Keaton. Keaton's distinctive chin and eyes are really well done and he has an appropriately grim expression on his face. The "ears" on the cowl might be a bit bent when removed from the package but give them some time or a bit of hot water and they'll be just fine. This really looks like someone wearing a cowl, as you can see the separation between Bruce's head and his cowl. The cowl is all one piece and covers the shoulders, helping to anchor the cape. The bat symbol on the chest is accurate to the one used in the film (there are three points on the bottom of the bat, not one as seen in Batman Returns or the licensing materials for the film) and it's a sculpted element, not just painted. Oh, and the cowl's texture? It really looks like a molded piece of rubber and matches the really expensive Batman Halloween masks we all tried on as kids. 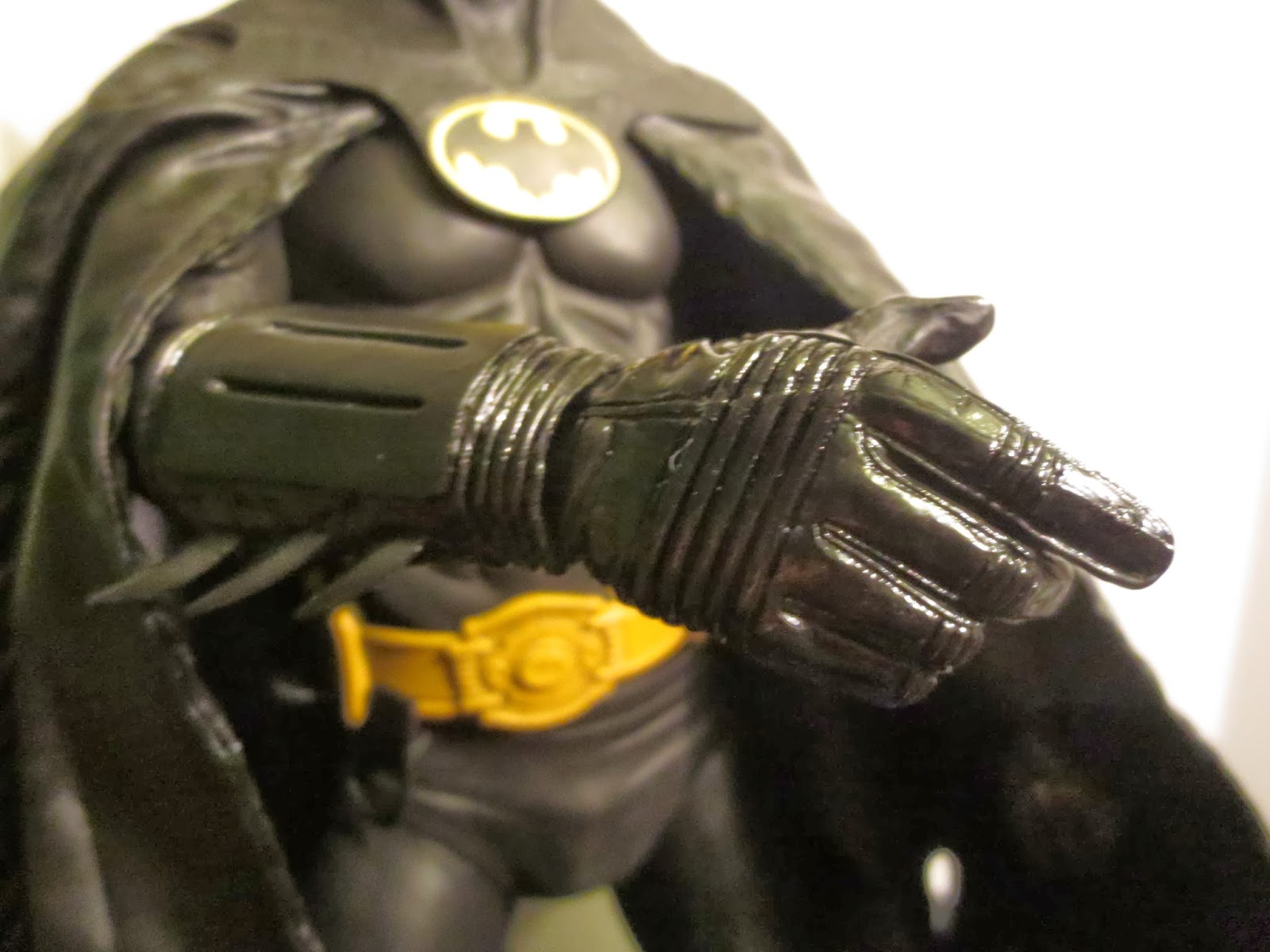 All of the body armor is excellent and near perfectly matches what is shown on-screen. I'm going to let the pictures do most of the talking her, but I will point out the insane level of detail on Batman's boots (did you know the 89 Bat boots used a Nike shoe as a base?), his gauntlets, and his gloves. The gauntlets have great detail work and feature some nice, softer spikes that don't get bent out of shape. The gloves are covered with studs on the palms and are just amazing. Overall, I think the Batsuit here has cleaner, crisper details than the Hot Toys figure (which I don't own, but I'm pretty familiar with). The Hot Toys figure has the benefit of having the suit as mostly all one piece, though. 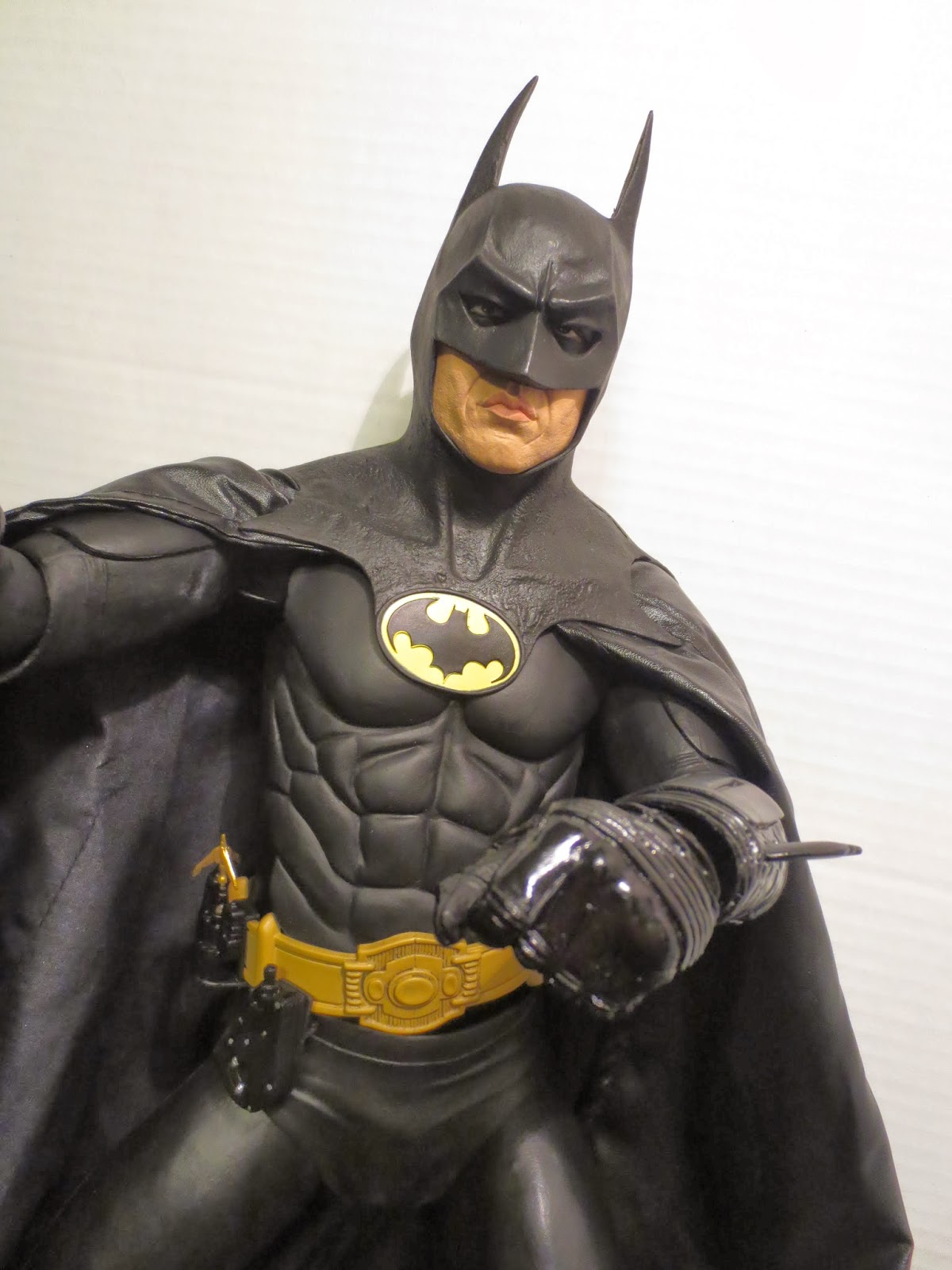 Paint on a Batman figure? All black, right? Mostly, although NECA has done some great work in choosing appropriate plastic choices for different pieces of the figure. While the figure is mostly molded in the appropriate colors of plastic, the choices of shinier plastics on elements such as the gloves, boots, and gauntlets really helps to accent those as armored elements versus the duller, more matte body suit and armor panels. The parts of Keaton's face that are showing, the chin and the eyes, are pretty impressive. I love the eyes and how NECA nailed the eyeliner that has become standard for Batman movie portrayals. That really is such a crucial element of the live action Batman look. 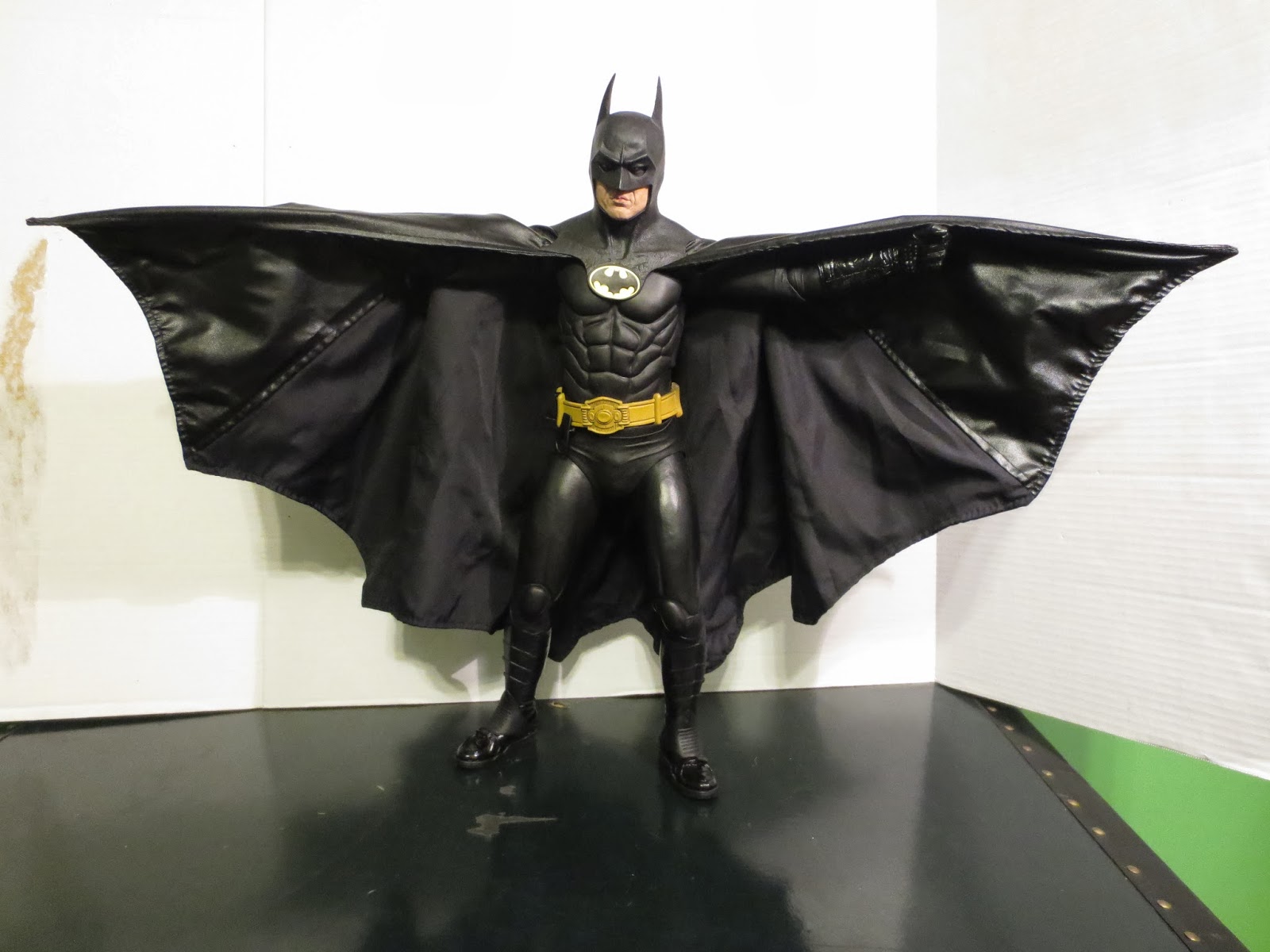 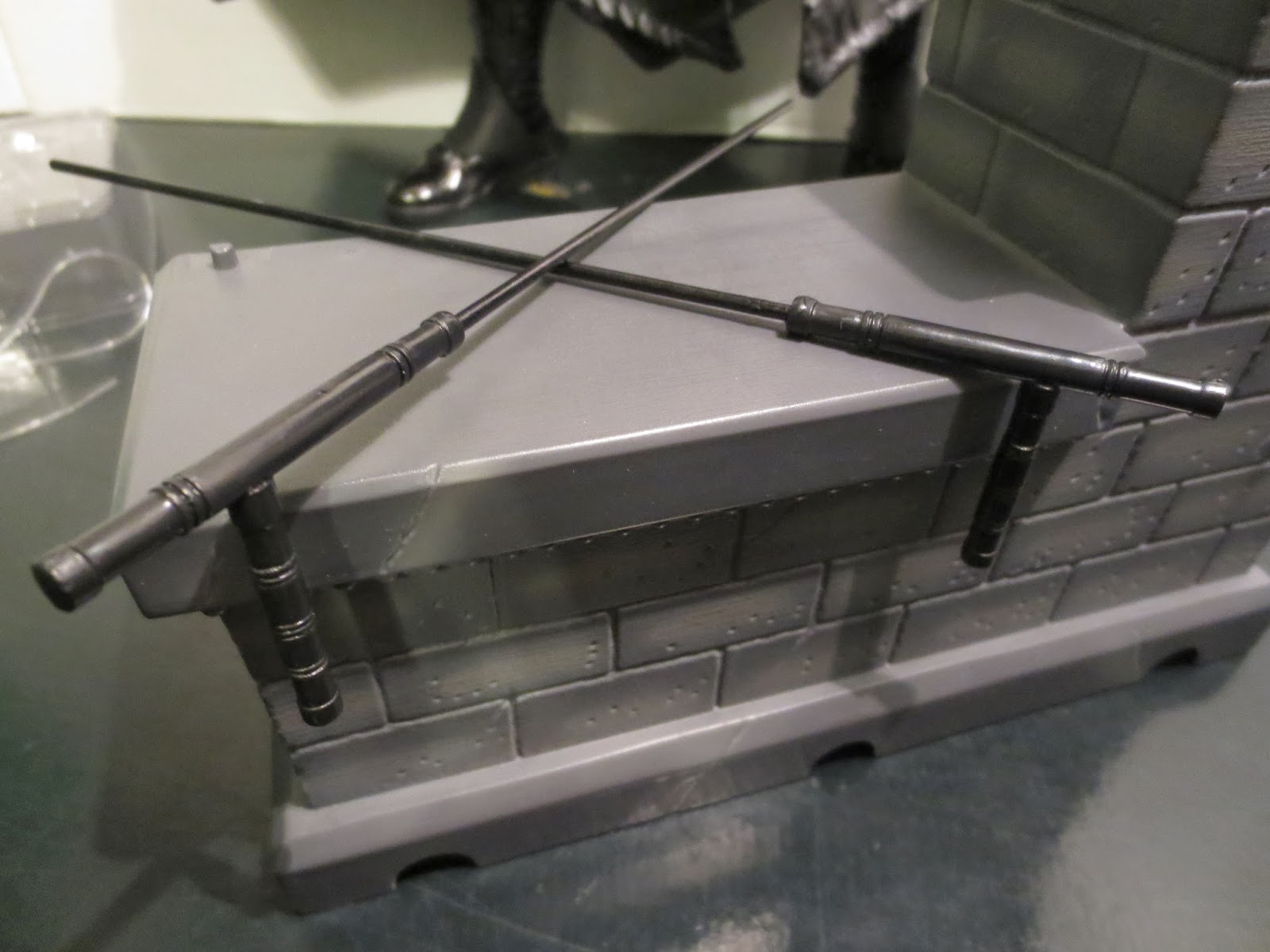 In starting to talk about the accessories, let's talk about the cape for a few minutes. It's massive and looks fantastic rather draped around the character or being held up like bat wings to intimidate criminals. It's made of a nice, pleather like material and seems to be of a fairly good quality. The figure comes with two long tonfa like devices that allow the wings to remain in a fully extended position. Just be careful as the poles on them are metal and I've seen some reviewers comment that they experienced some tearing when sliding them into the delicate slit on the top of the cape. 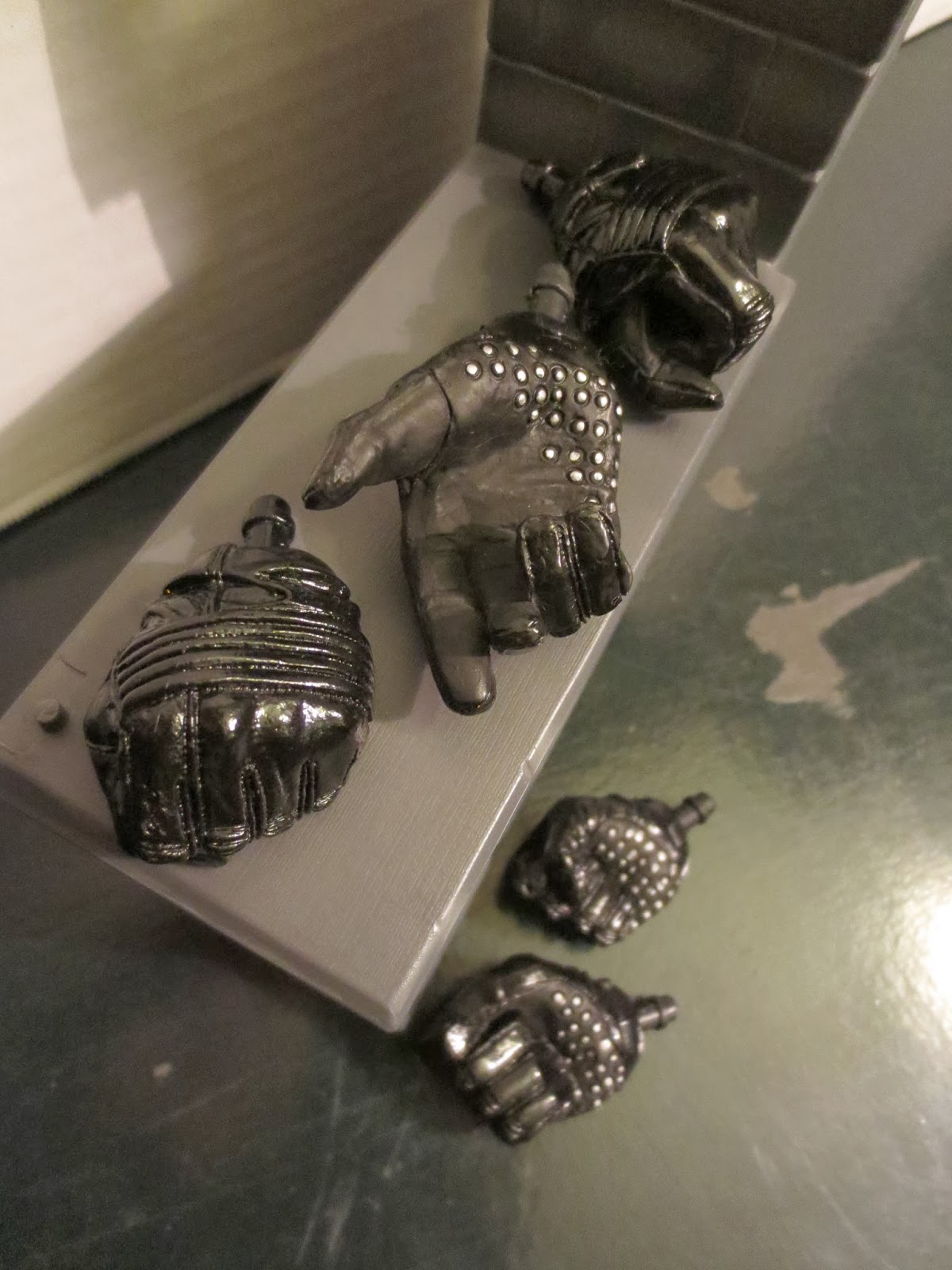 Batman comes with a total of five hands: two fists, two gripping hands for the cape extenders, and one open right hand which holds the grapple gun. Switching out the hand pegs is quite easy. They're very thick and sturdy and I never felt like they were delicate. Just keep firmly and evenly pulling on them and they should come out with no problem. 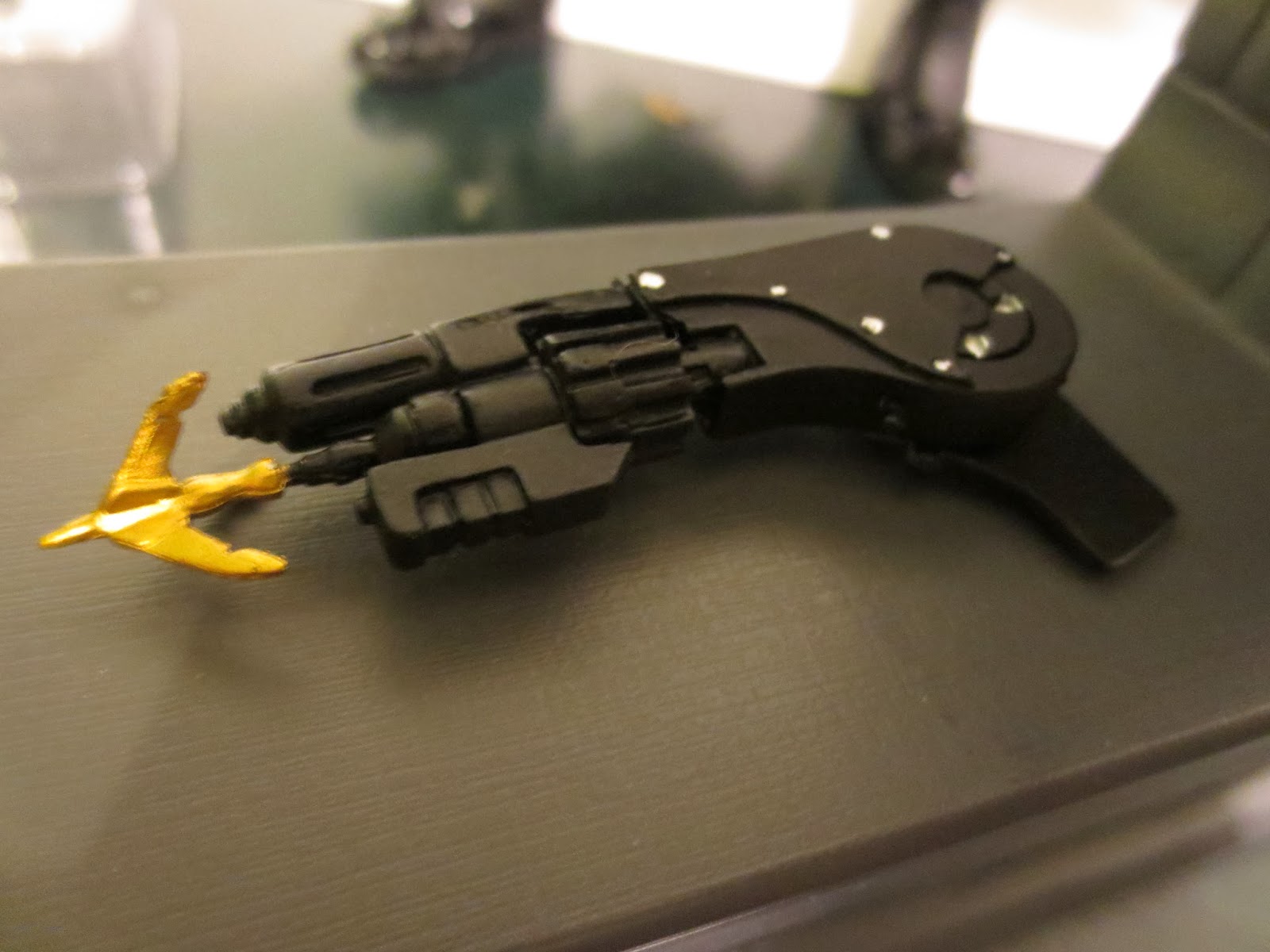 The grapple gun was actually introduced in the 1989 film and later became a staple of the character's arsenal of gadgets. Featuring some nice painted bolts and the spear that launches from the gun, the grapple is a nice looking piece of equipment. It features the fold down handle (just like in the film) and can split into two pieces for storage. Be careful of the spear tip itself, as it feels very fragile and delicate. 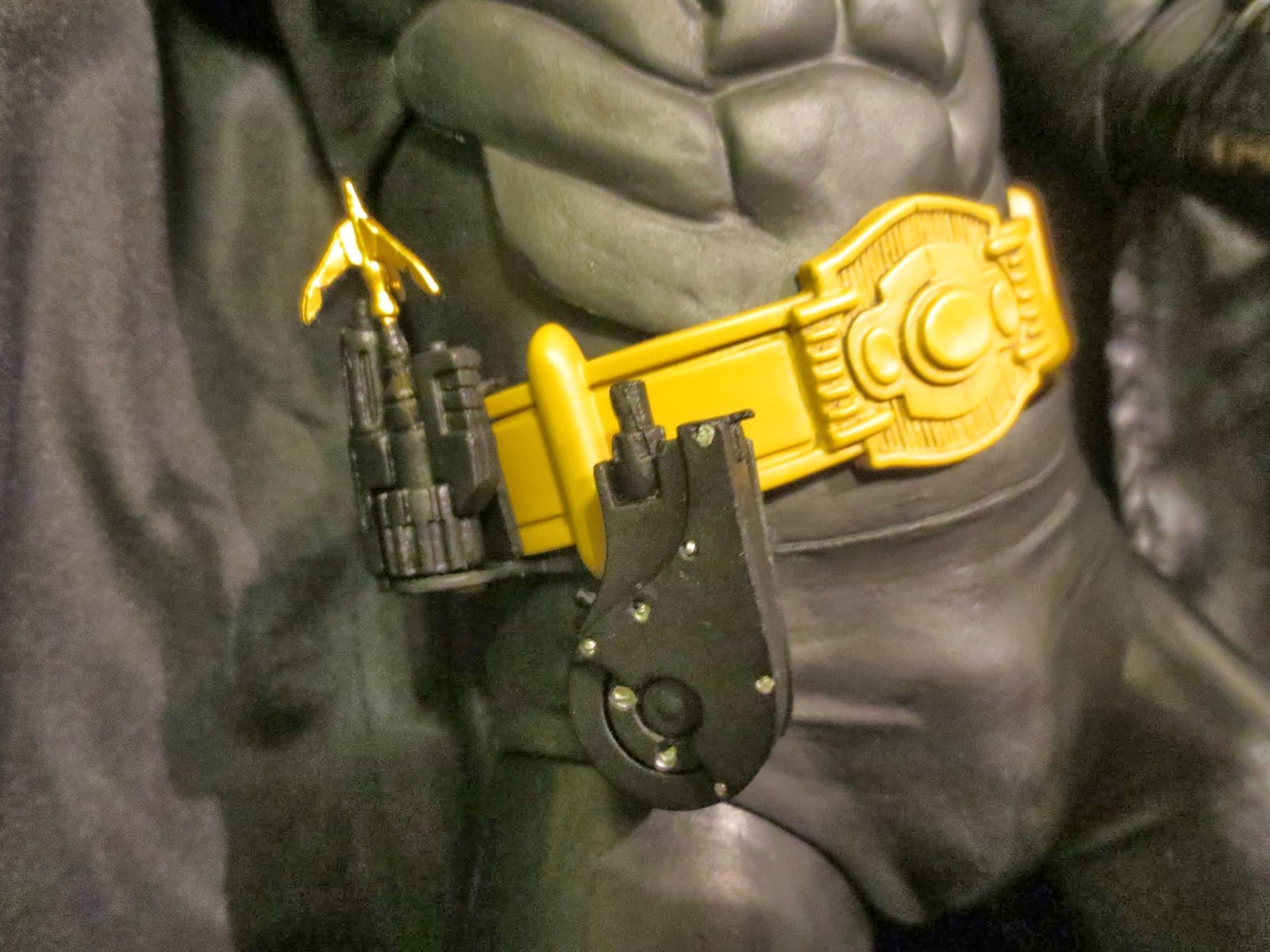 The two pieces of the gun can store easily on a device that attaches to Batman's utility belt. It's a plastic clip that stories on the right side of his belt. Be careful putting it on, as it also seems a bit fragile, but I didn't have any trouble attaching it. I would decide whether or not you want to keep it on or off, though. 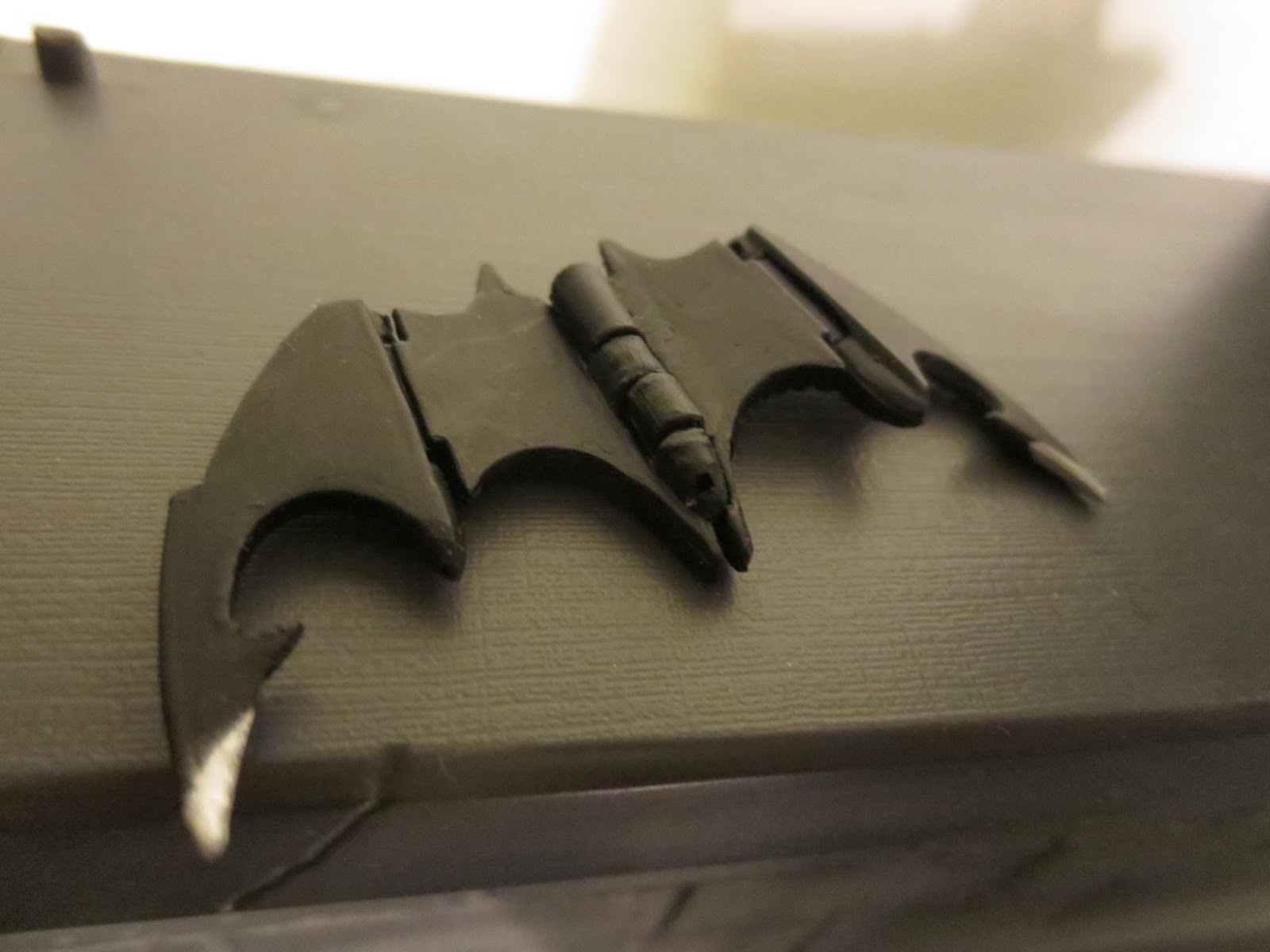 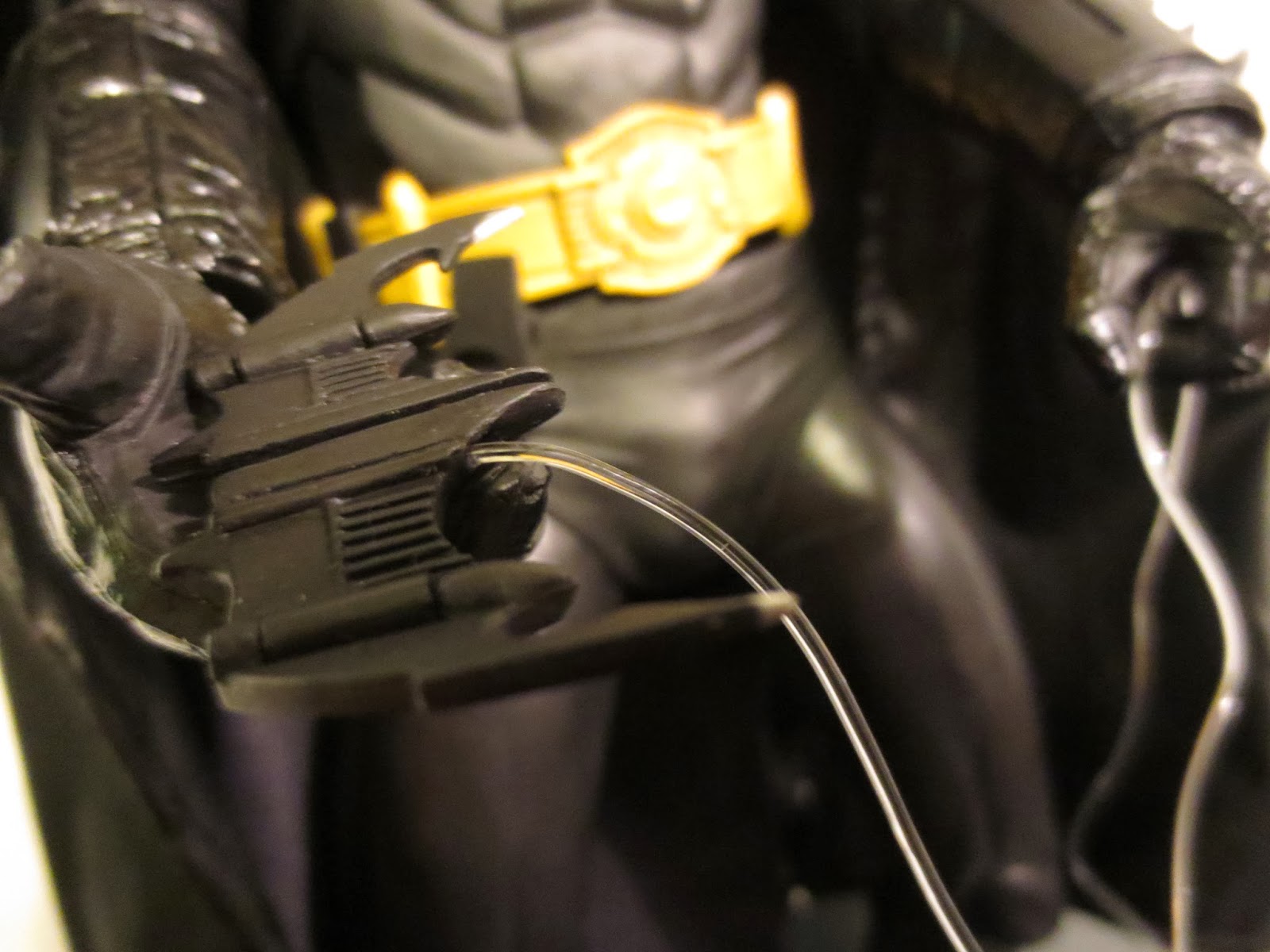 The Batarang is incredibly cool. It has silver paint apps on the tips of the blades and can actually fold up: it folds in three different places! Now I just hope that NECA makes the programmable Batarang when they make a Batman Returns Batman (let's hope they do!). There's a hole in the Batarang that allows you to loosely slide in a length of rubbery plastic cord. It looks very nice on display. 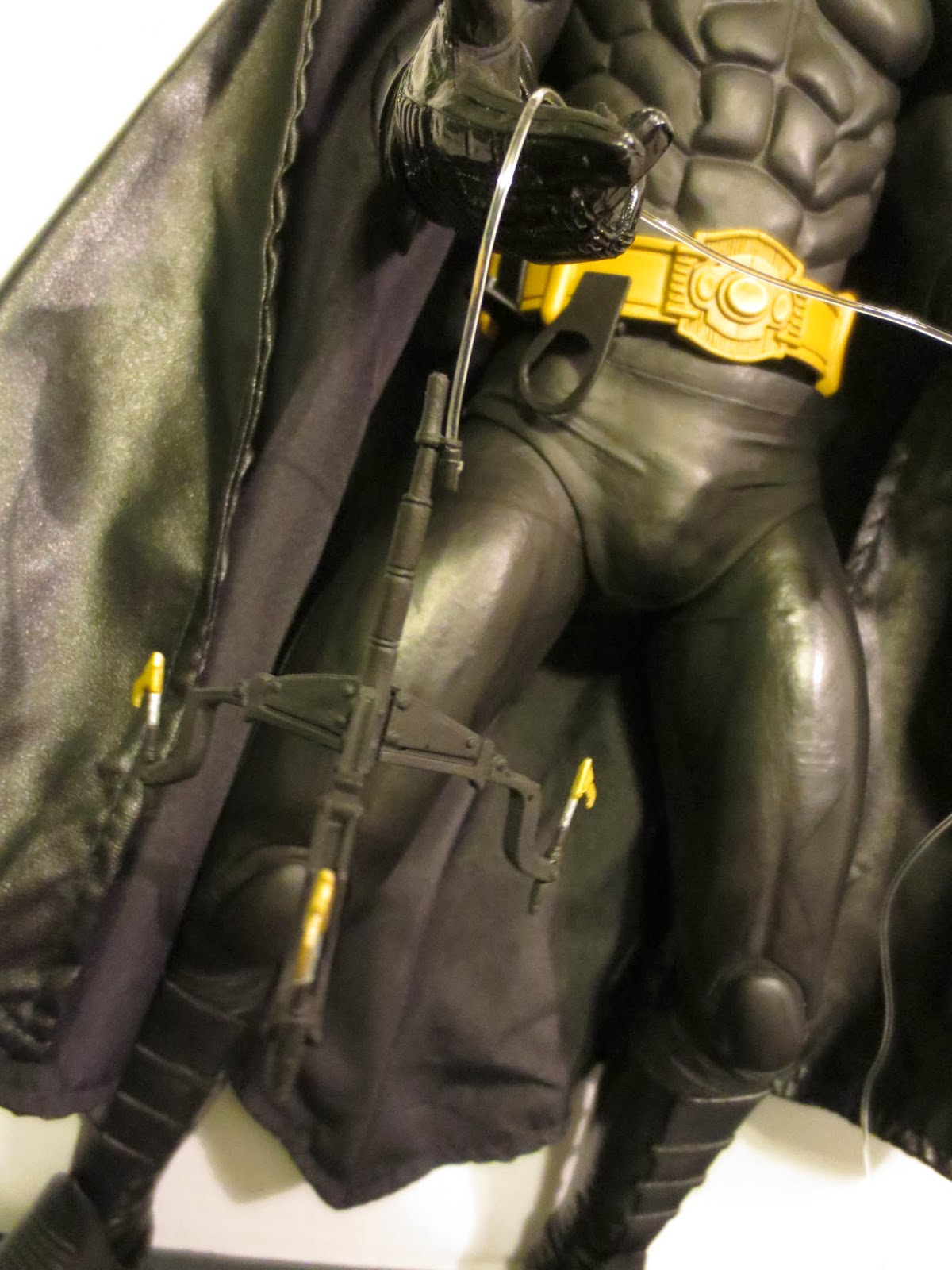 Lastly, Batman comes with an enormous grappling hook. It's nicely detailed and can also hold the clear plastic cord for display. Do not try to display your Batman hanging from this thing, though! I have a feeling it would snap in a heartbeat (especially if Vicki Vale tries to convince you she only weights 108 lbs.). You'd better just display Batman dangling it from the cord and getting ready to swing it. 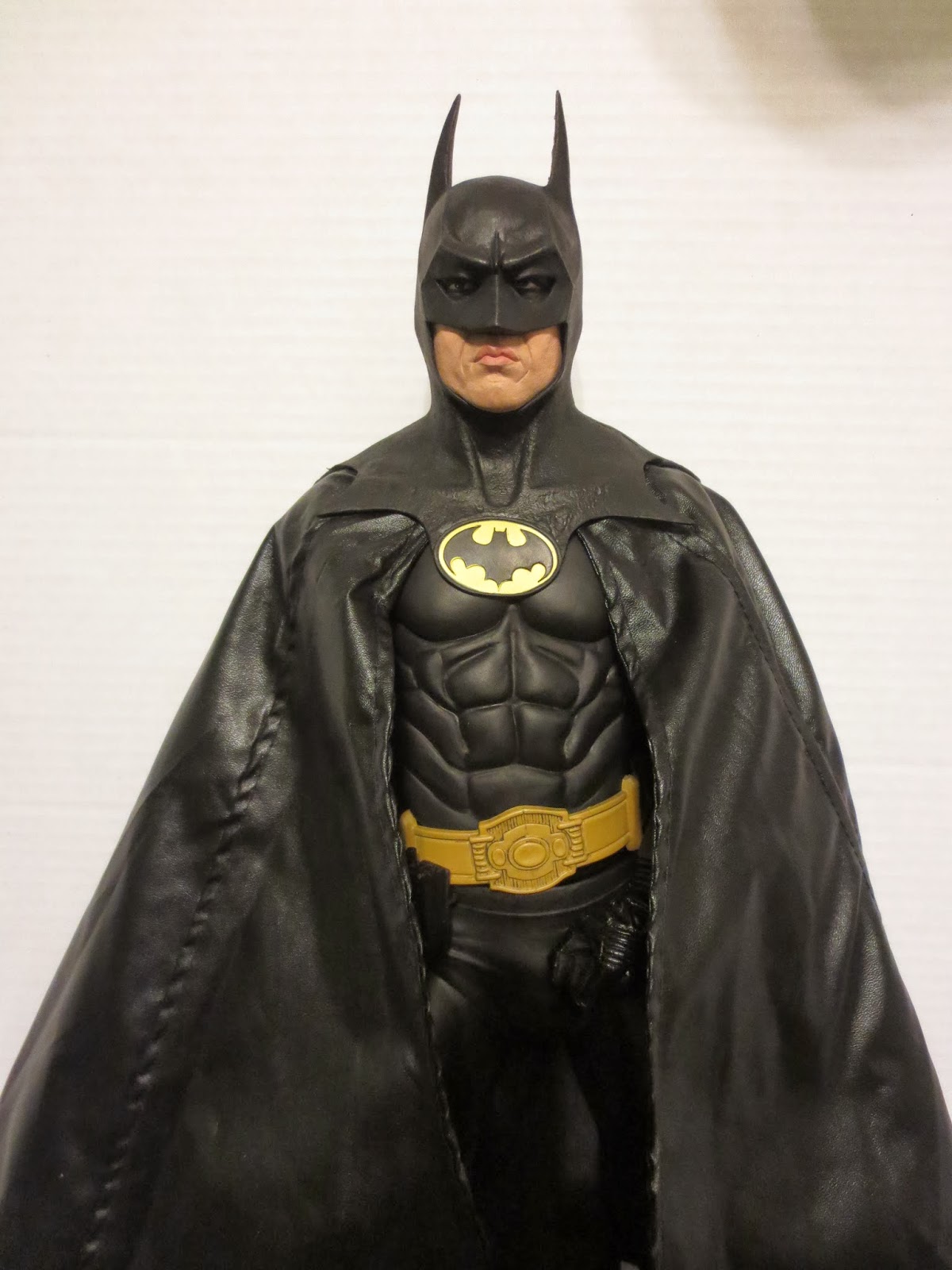 This is hands down the largest action figure I've ever bought. It took something pretty special to convince me to pick up something this large and Michael Keaton's Batman was it. NECA did a fantastic job of really making this into a worthwhile purchase for Bat-fans. It's incredibly detailed, loaded with gadgets, and certainly makes a statement when someone walks into your house. It's also available for under $100. I don't always talk about price, but I'm amazed that NECA was able to release this for $100 dollars! While the Hot Toys Batman features more accessories, a light up stand, and better fine details in the clothing, it's also retailed for about three times more than this guys costs. Plus, this guy is 18 inches instead of 12. I don't feel there's too much of a reason why this figure needs to be compared to that release, but being that those are the only two 1989 Batman figures currently out on the market, the comparison seems inevitable. While I do wish the articulation was a bit better, that's the only real complaint I have. Overall, I'm giving this guy a Great and a half. A few more accessories would have been nice (I really wanted "The Gauntlet") but this guy is still a much better value than anything else you'll find on the market. Plus, if you wanna get nuts, this guy is ready to get nuts.


I snagged this guy at Big Bad Toy Store for 84.99. They also have the quarter scale Adam West Batman, as well for the same price. If you're planning on owning either of these figures, jump on them now!

By the way, if time travel ever gets perfected these are the films from 1989 that I will retroactively take my 5 to 6 year old self to see: Batman, Indiana Jones and the Last Crusade, Lethal Weapon 2, The Abyss, Red Scorpion, The Punisher, Tango & Cash, UHF, and Pet Semetary.  I'd also go see C.H.U.D. II: Bud the CHUD because I haven't see it yet and that would be as convenient of a time as any.