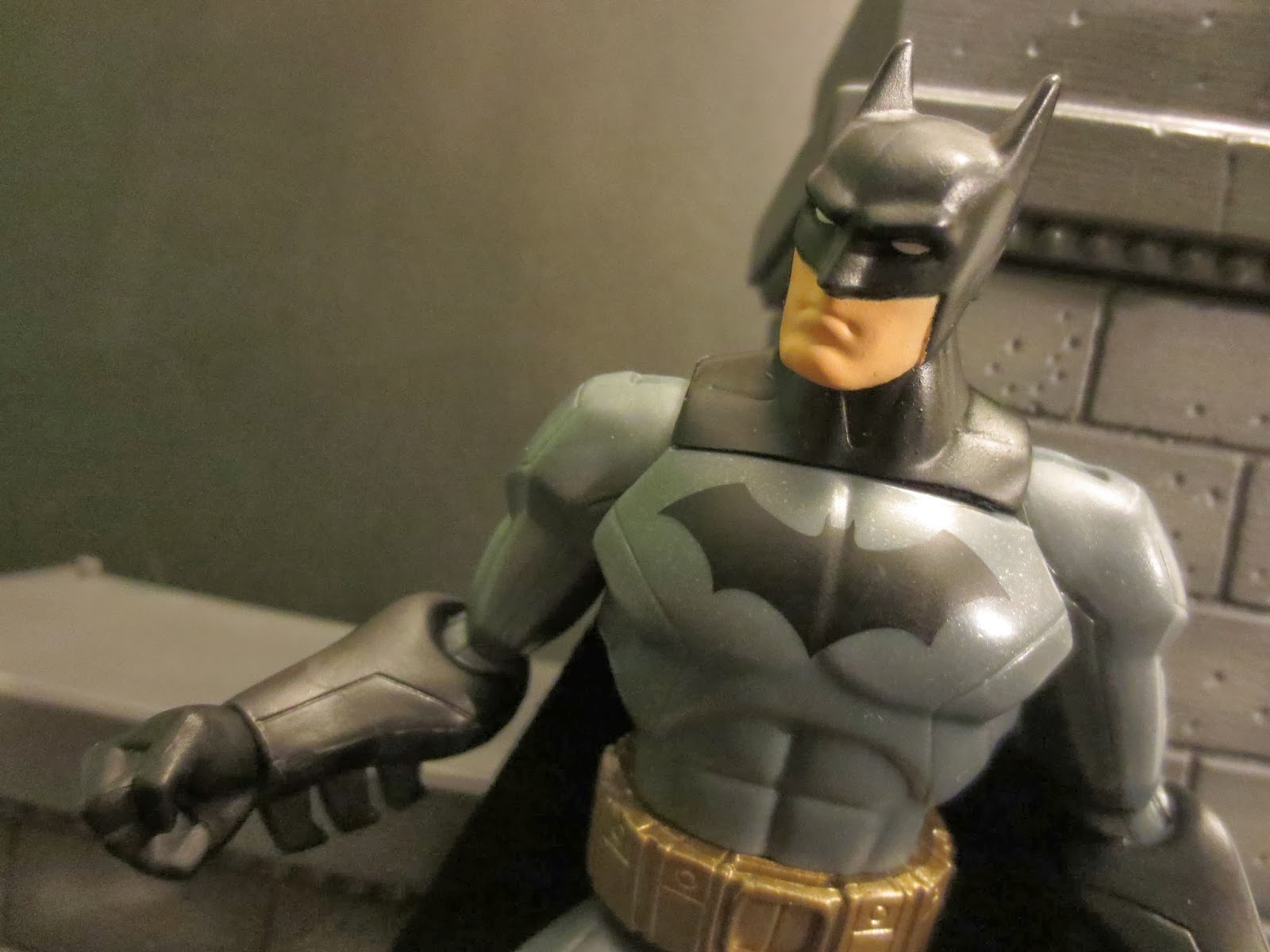 Another year, another Mattel incarnation of Batman and the DC Universe. This year it seems that we'll be seeing two new lines Batman/ DC themed toylines from Mattel: the 4 inch DC Multiverse line and the 6 inch Total Heroes line, which is what I'm looking at today. Total Heroes is an unusual beast: it's not quite as articulated or sculpted in a more accurate comic style like DC Universe Classics or the DC/Batman Unlimited lines, but it's also a major step above the Batman Power Attack series. So far the line features Batman and most of the other big DC mainstays like Superman, Flash, Aquaman, and Green Lantern (hopefully Wonder Woman doesn't get left out) and has a few villains scheduled for the new feature like Bizarro, Sinestro, and Mr. Freeze. Will kids enjoy this line? Is it going to appeal to collectors? Are these in scale with any DC figures that have come before? Find out after the break....


I imagine I'll be in the minority here, but I really like the style of these. They're not as stylized or disproportionate as the Power Attack Batman line or the Brave and the Bold, but they still have a very clean, simple style to them. They kind of remind me of the style of some of the DC Animated Universe films that have come out. Remember the Target exclusive Superman/ Batman: Public Enemies DC Universe Classics wave? That's kind of the vibe I'm picking up here. Batman measures in at just a hair over 6 1/4 inches tall which makes him a little shorter than DC Universe Classics, but not by too much. 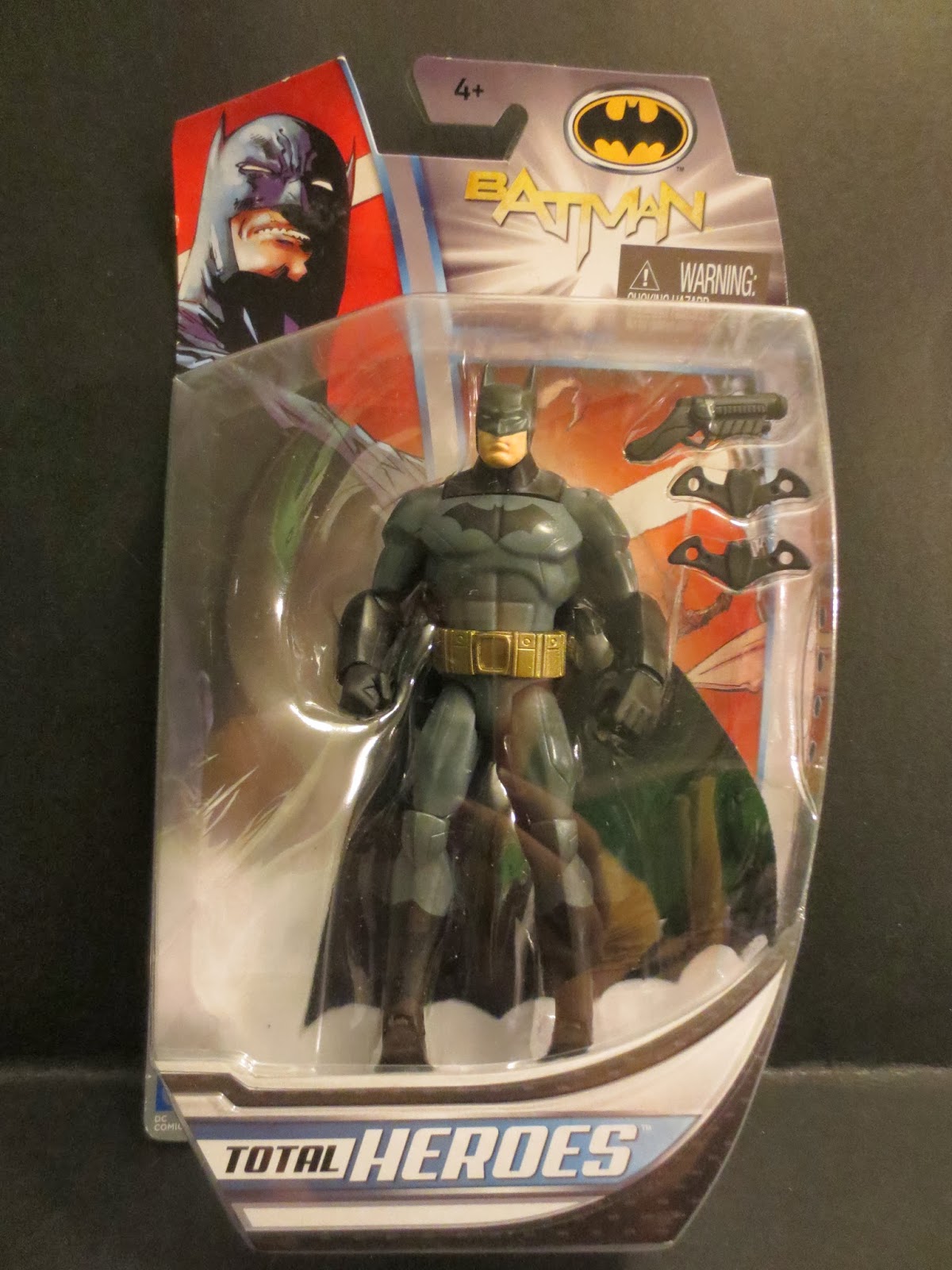 I don't mention packaging all the time and rarely do I include a picture of it, but I manged to do so here. It's not bad. I love the Tony Daniels image of Batman on the top left (from Detective Comics #1. It's fairly small and doesn't waist any space. There's a very limited bio and a picture of the cover of Batman: The Dark Knight #1 on the back. 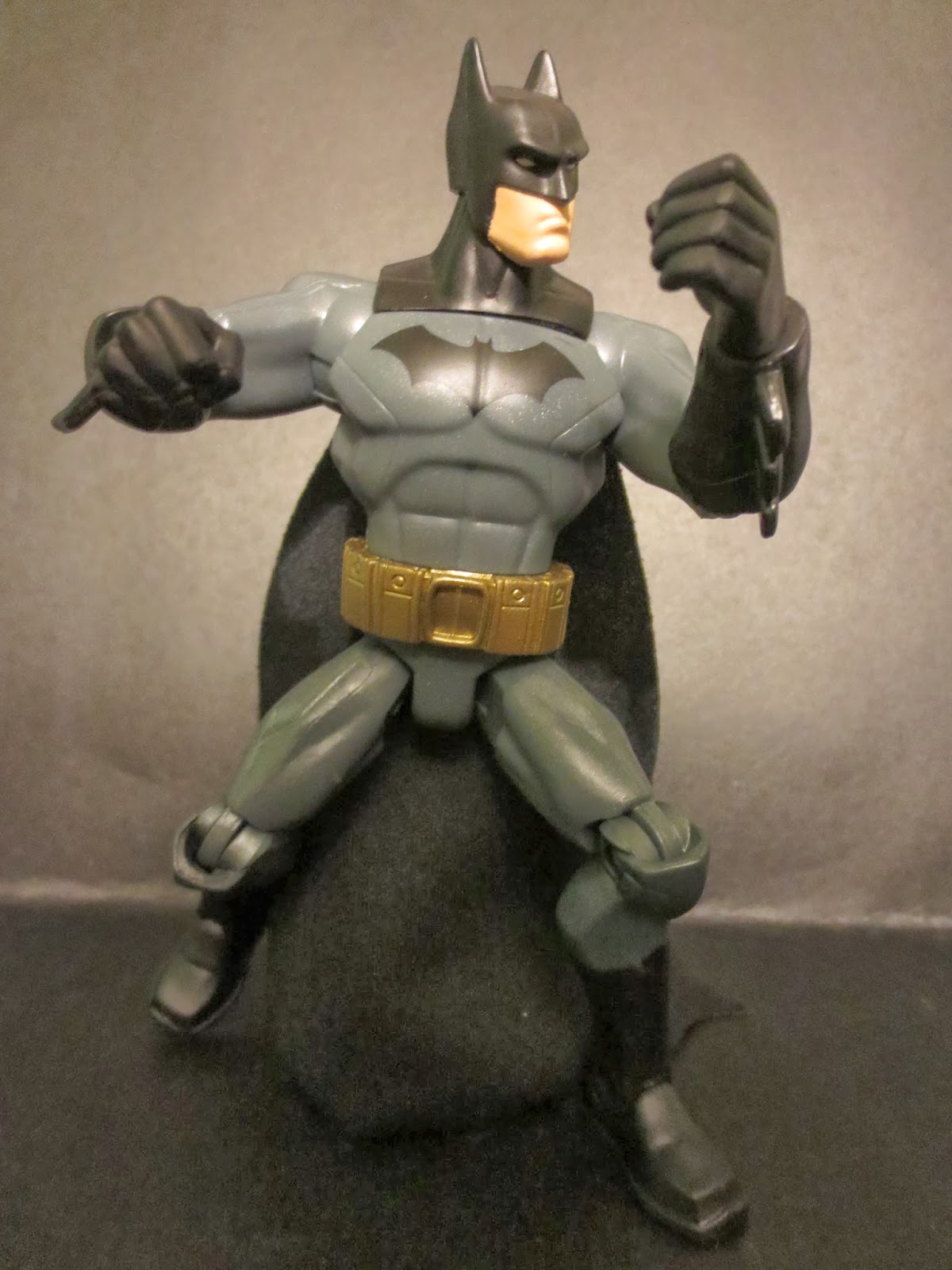 I wasn't expecting much with the articulation, so I was quite pleasantly surprised. Batman features: hinged ankles, hinged knees, swivel/hinge hips, a swivel waist, swivel/hinge shoulders, swivel/hinge elbows, swivel wrists, and a ball jointed neck. That's more articulation that most DC Collectibles figures. The only joints missing from him that came standard on DC Universe Classics were the ab-hinge, thigh swivels, and bicep swivels, although this guy has more articulated elbows. Most of the joints feel really nice and tight and the quality control seems good. The range of movement is somewhat restricted on most joints, but for basic poses you should be in good shape.


From just a cursory examination of this figure, I think it's pretty clear that the intention here was to replicate Batman's appearance in the New 52 and for the most part Mattel succeeded. Imagine if the New 52 Justice League was turned into a Saturday morning cartoon: this is what you'd get. There's lots of engraved lines and texture in the costume that adds some nice, simple detail. The headsculpt is good; it's a very classic Batman look. The utility belt is a very modern looking version and even features two pegs on the back for the storage of the included Batarangs. Oh, and the blades on Batman's gauntlets? Nice and straight and not the least bit gummy. I always pay attention to those and they turned out really well here. 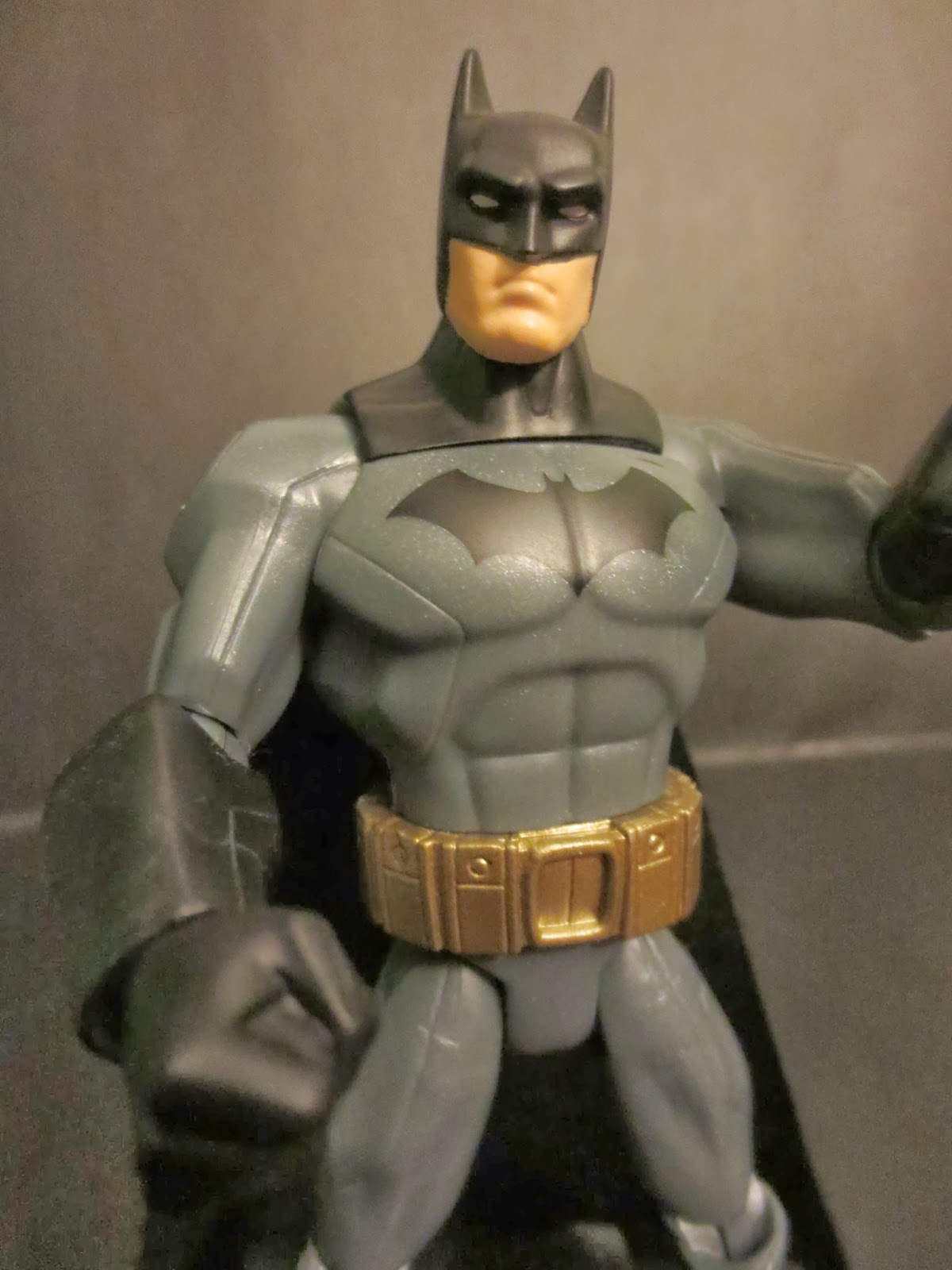 Gray and black is a pretty simple paint scheme and a tough one to mess up. For the most part Batman looks great. He's mostly molded in gray plastic that has a glittery material mixed in with it. I'm not sure what Mattel was trying to capture here (molded armor?) but it is eye catching. The bat symbol on the chest is very neat and clean, the utility belt is a shiny metallic gold, and the line work on the face and cowl is excellent. The only problem I have with my figure is that there seems to be some paint scuffs on his left gauntlet and left boot. Maybe the figure was touched before it was fully try? Who knows? 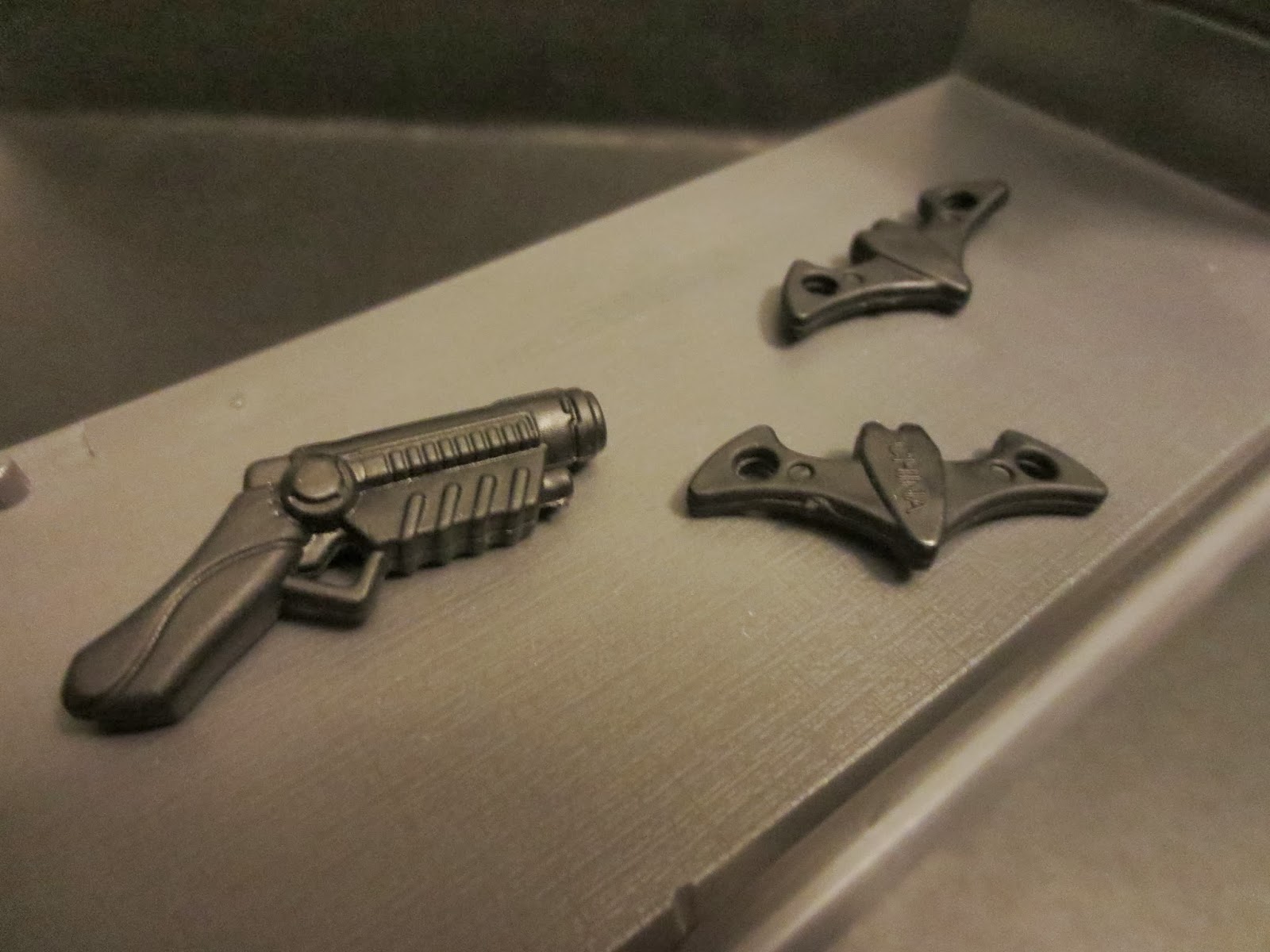 I often complain that Batman figures don't always come with good accessories. This guy does. Nothing silly or crazy here like a neon-yellow missile firing attack chair or a giant bladed translucent flashlight. Nope. Batman comes with two Batarangs and a grapple gun that looks very reminiscent of the prop seen in Batman Begins and The Dark Knight. This is a great accessory complement for the Dark Knight! The Batarangs have some nice miniscule details and holes on both sides which allow them to attach to the pegs on the back of Batman's utility belt (which I happen to think is a very neat feature). The grapple gun is a simple accessory, but it looks great with the figure and is just neat to have. There's nothing mind-blowing here, but I simply love having normal, regular accessories for Batman. He also has a cloth cape. Thank goodness! I greatly prefer those to the rubbery or hard plastic ones that look so "blah!" 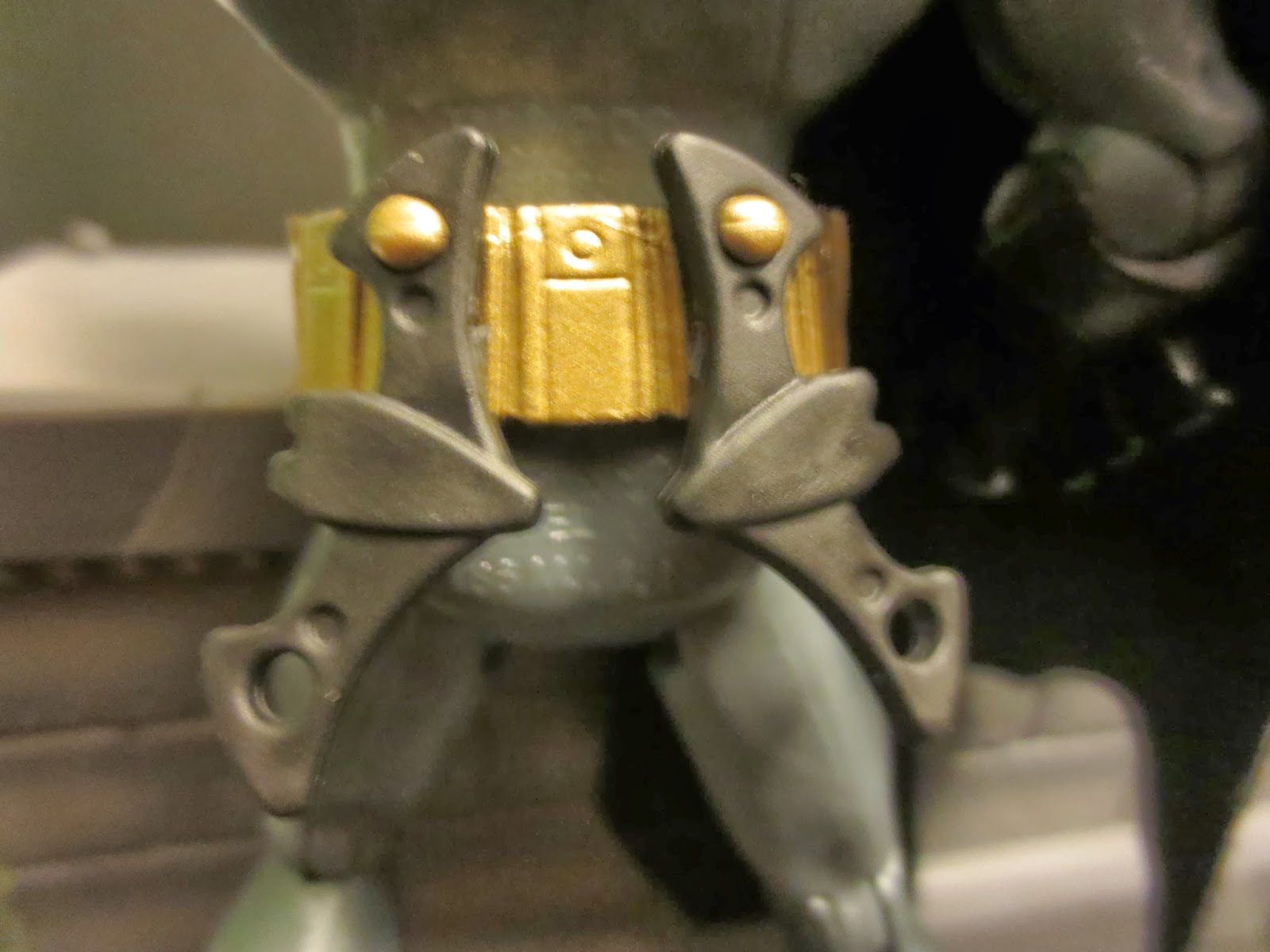 So far I've seen a fair number of people upset about this line. Stylized is often a dirty word when it comes to toy collectors, but I find the look of this figure to be quite appealing. It's a nice, sturdy figure that seems to have enough nice detail and articulation to appeal to collectors while being kid friendly in design, durability, and price range. I wish he was just a little taller so that the figures would fit in more consistently with Mattel's previous DC Universe efforts, but honestly obtaining a normal scale in this particular size range always seems like a Sisyphean task. Honestly, if you put this guy amongst a group of DC Universe Classics Batman figures, most people probably wouldn't be able to pick him as the odd man out. Ultimately, I think I'm giving him a Good and a 1/2. He's not a definitive Batman figure or anything, but the presence of the accessories and the nice, clean look help him to stand out in my mind. I'm really interested to see where Total Heroes goes. I'll probably at least pick up Mr. Freeze, but I'm hoping we see a few more Bat-characters down the road. 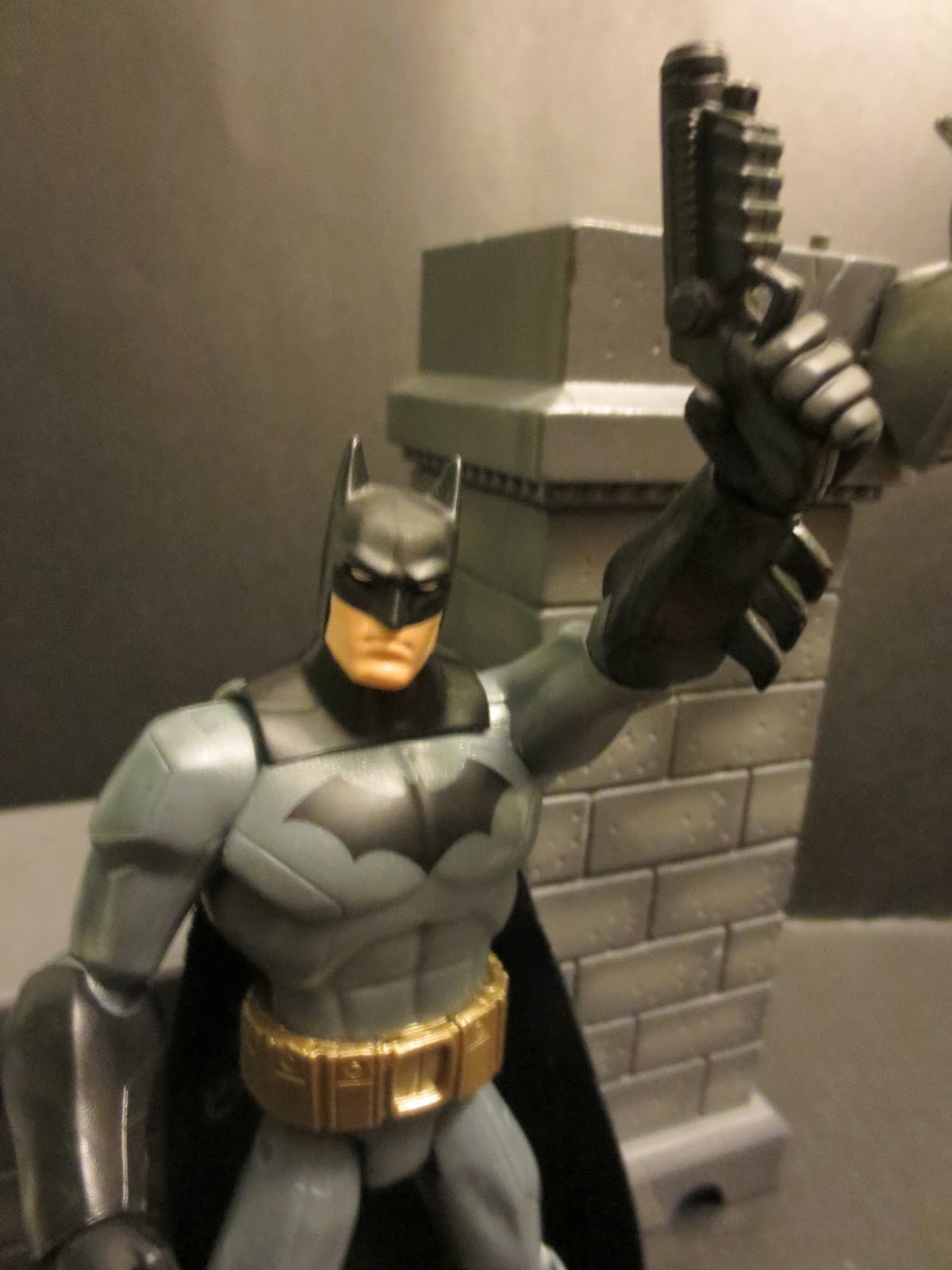 Interested in a Batman of your own? Big Bad Toy Store has this and many more Total Heroes available for pre-order right now!