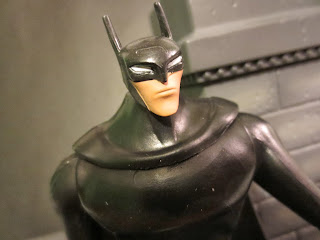 I haven't watched Beware the Batman yet, but I plan to as soon as I get around to picking up the first season on DVD. I'm always willing to give anything Batman related a try and I really like how the series seems to utilize many of Batman's lesser know villains such as Anarky, Magpie, Professor Pyg, and Tobias Whale. Remember how Batman: The Animated Series launched characters like Clayface, Killer Croc, and Harley Quinn into the A-list of Batman villains? I'm hoping Beware the Batman does the same for these guys. I'm actually really shocked that Mattel didn't release a toyline to coincide with the series, as today's figure is simply included as part of the Batman Unlimited line that emerged when DC Universe Classics disappeared from retail. The cartoon has it's own unique art style that Mattel has attempted to translate into the 6 inch scale. Were they successful or should you truly beware of this Batman variant? Read on and find out after the break.... 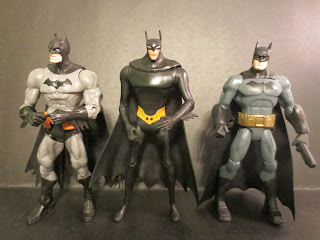 Batman is about 6 1/2 inches tall and looks really different from most of the other DCUC styled figures. He's quite thin and gangly, appearing to be a completely unique figure with no shared parts. While it matches the style of the show, I'm not sure that it works so well as a 3D representation of the character. I guess I'm saying that while Mattel did a good job of matching the show's style, I'm not sure that style works so well in this medium. Here's a picture of Batman from Beware the Batman, FYI. 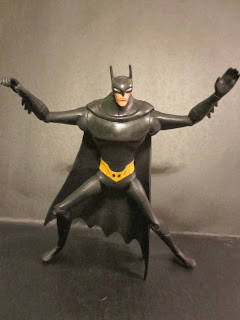 Batman features the following points of articulation: swivel/ hinge ankles, swivel/ hinge knees, swivel/ hinge hips, a swivel waist, swivel/ hinge shoulders, swivel/ hinge elbows, swivel wrists, and a ball jointed neck with a vertical hinge. Other than missing the abdominal hinge, he's not really missing any articulation over a traditional DCUC figure; Mattel simply combined the thigh, boot, and bicep swivels with the knee, ankle, and elbow hinges. Still, though, I have some issues with the range of some of those joints. The hips are built very similarly to a Masters of the Universe Classics figure with the swivel/ hinge joints being covered completely by a soft plastic waist piece (something that Mattel is apparently unable to do with female figures in that line). Anyways, I like the vertical hinge on the head, but the shoulders and hips feel really stiff and limited. 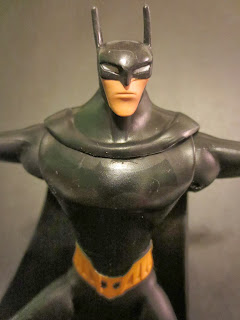 OK, so I'm trying to discern the fairest way for me to evaluate the sculpt. I'm OK with the look of Batman in the animation, but I don't think it translates well into an action figure. Still, I think Mattel did a pretty decent job of interpreting it, but I don't like it. What can I say? First, let me say that I think the head is too small, even when compared to the animation style. Frankly it looks ridiculous, especially when paired with the top of the cape draped over the neck and shoulders. The legs are also too darn skinny. Rather than looking stylish and thin, it just looks poorly proportioned. The gloves and the belt look good, but the rest of the body is really plain. My figure also has lots of scratches, dents, and mold problems. There are some scrapes on the upper chest and some molding issues on the back of the cowl. If I didn't know this guy came packaged from a legitimate retailer, I would have thought he was one of those E-bay figures that got pilfered from the factory's rubbish bin.

It's hard to pick on the figure too much in regards to paint as he is essentially molded in all black. The white eyes look good, but the paintwork on his chin is really sloppy and extends over the cowl a bit. The most disappointing element is the Batsymbol on the chest. It's really tough to notice as it's essentially just a glossier shade of black. In the series, the suit looks lighter than the symbol and is a raised element. This really should have been sculpted. It's really, really poorly done. 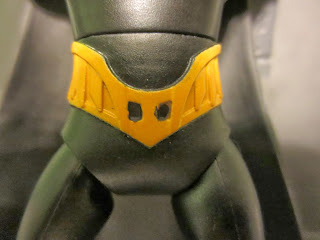 What accessories does Batman come with? Surely something cool from the series, right? Maybe even a reused Batarang or something? Nope. Nothing. I do believe that someone needs to mandate that every Batman figure should at least come with a Batarang, if nothing else. 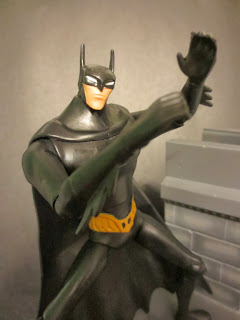 As you can probably guess, I'm not happy with this figure. I took a chance on it since I managed to get it for around $5, but I'm still not sure it was worth that. An awkward and uninteresting sculpt coupled with poor paint work and no accessories does not a good action figure make. I'll give it to Mattel that they did create a unique body for the character, but this is still a pretty big fail indeed. Ultimately I'm giving the figure a Crap and a 1/2 rating. He's just not worth it except for fans who have to have something from Beware the Batman on their shelves. I'd be very interested to see Mattel try a more kid focused toyline based on the series (I'd love figures of some of those characters from the show) but we'll have to see Beware the Batman can survive the Cartoon Network, first. Overall, I'm warning you to beware of this Batman figure. Unless you're snagging it as a curiosity, just leave it be.

Check out these other Batman Unlimited figures I've reviewed:
The Dark Knight Returns Batman
Planet-X Batman
If you really must have him, you can order him here from Big Bad Toy Store.