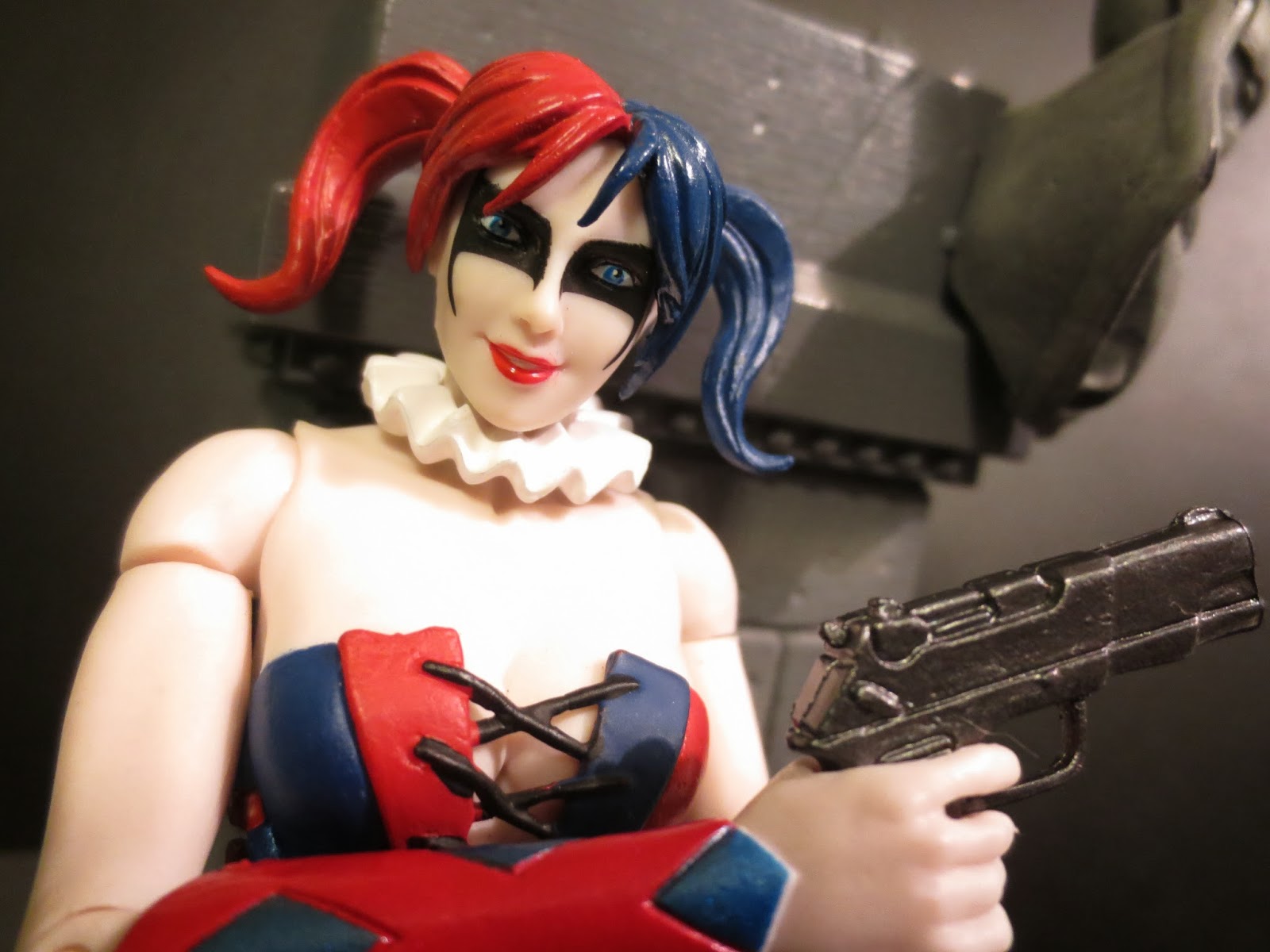 While the New 52 had many character changes, some more significant than others, one of the changes to a character that seemed to generate the most controversy was Harley Quinn's new appearance and personality in Suicide Squad, one of the original 52 titles from DC's 2011 relaunch. In Suicide Squad, readers were introduced to a more sexualized and violent Harley Quinn. While Harley's traditional design and portrayal has always seemed to have stylistic roots in pin-up art, she also always had a strangely innocent and playful side to her. The New 52 Harley is definitely more sadistic and perhaps even psychotic now, having been "drafted" into the Suicide Squad after going on a killing spree due to the Joker being imprisoned. Interestingly, after the events of the "Death of the Family" storyline, Harley Quinn seems to be less interested in the Joker and more focused on being her own person. A new Harley Quinn series just launched in November 2013, so perhaps there is plenty of time for both DC and fans to reach a Harley Quinn that almost everyone can agree on. Still, that's all secondary to our focus today: this new Harley Quinn figure from DC Collectibles' Suicide Squad subset of their New 52 Super Villains series. Just launched along with Captain Boomerang and Deadshot, Harley was one of my many purchases from Charlotte Mini-con this weekend. Ready for a look at the newest version of Dr. Quinzel? Then join me after the break... 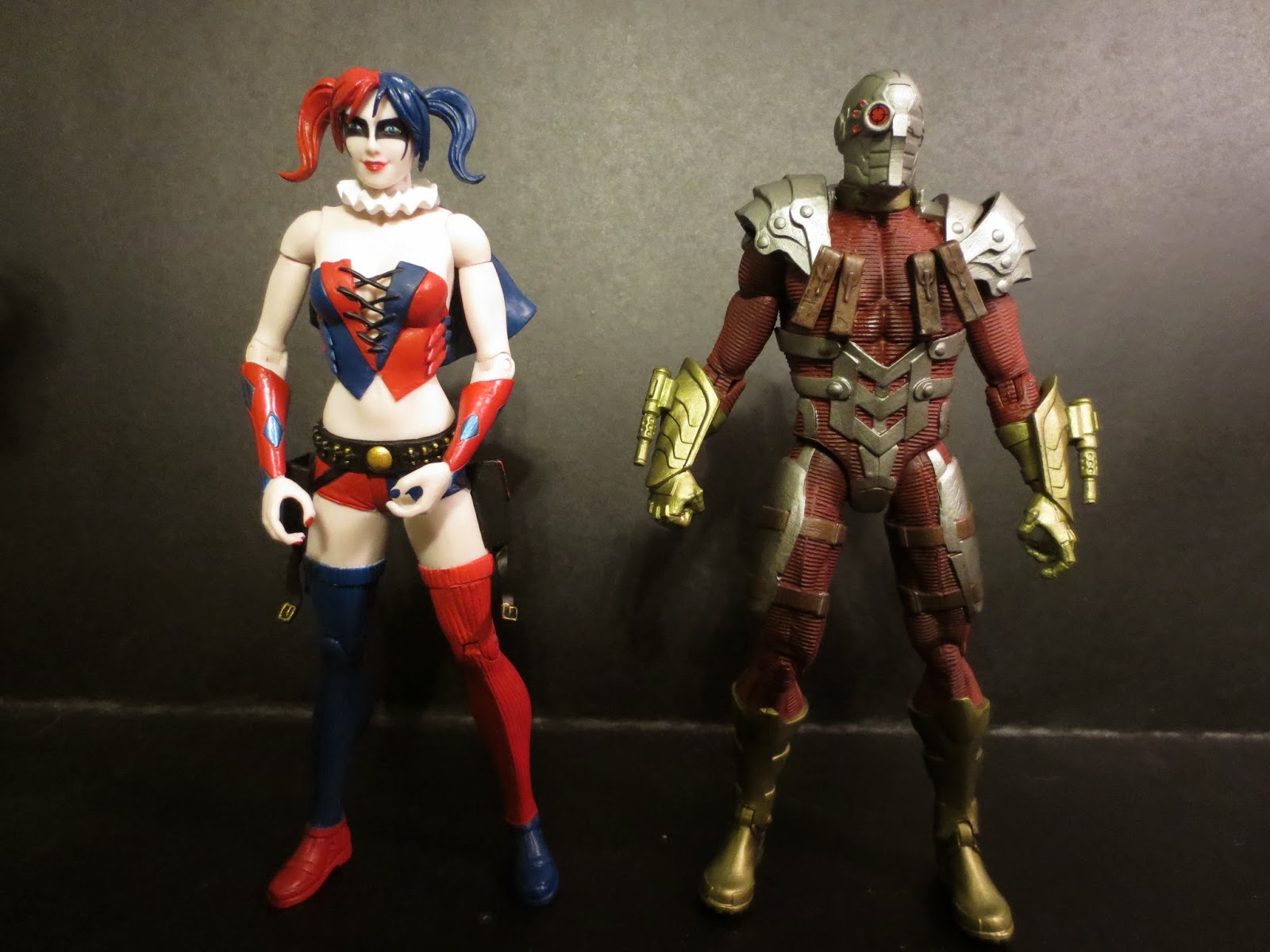 Harley Quinn stands about 6 3/4 inches tall which seems to be the average height of most DC Collectibles figures these days in their New 52 based lines. The style of the sculpt really captures the look and feel of the New 52 art. While these figures aren't as artist specific as previous DC Direct lines were I think this figure does manage to capture some of the nuances of the character as she appeared in the earliest issues of Suicide Squad, which is where this costume appears. Like most other DC Collectibles figures, Harley Quinn comes packaged in a window box. The package design uses black and red and has some neat little bullet holes punched in the front of the window. The figure is sculpted by Jack Matthews. I really need to keep a database of these sculptors or something so I can compare and contrast their work. 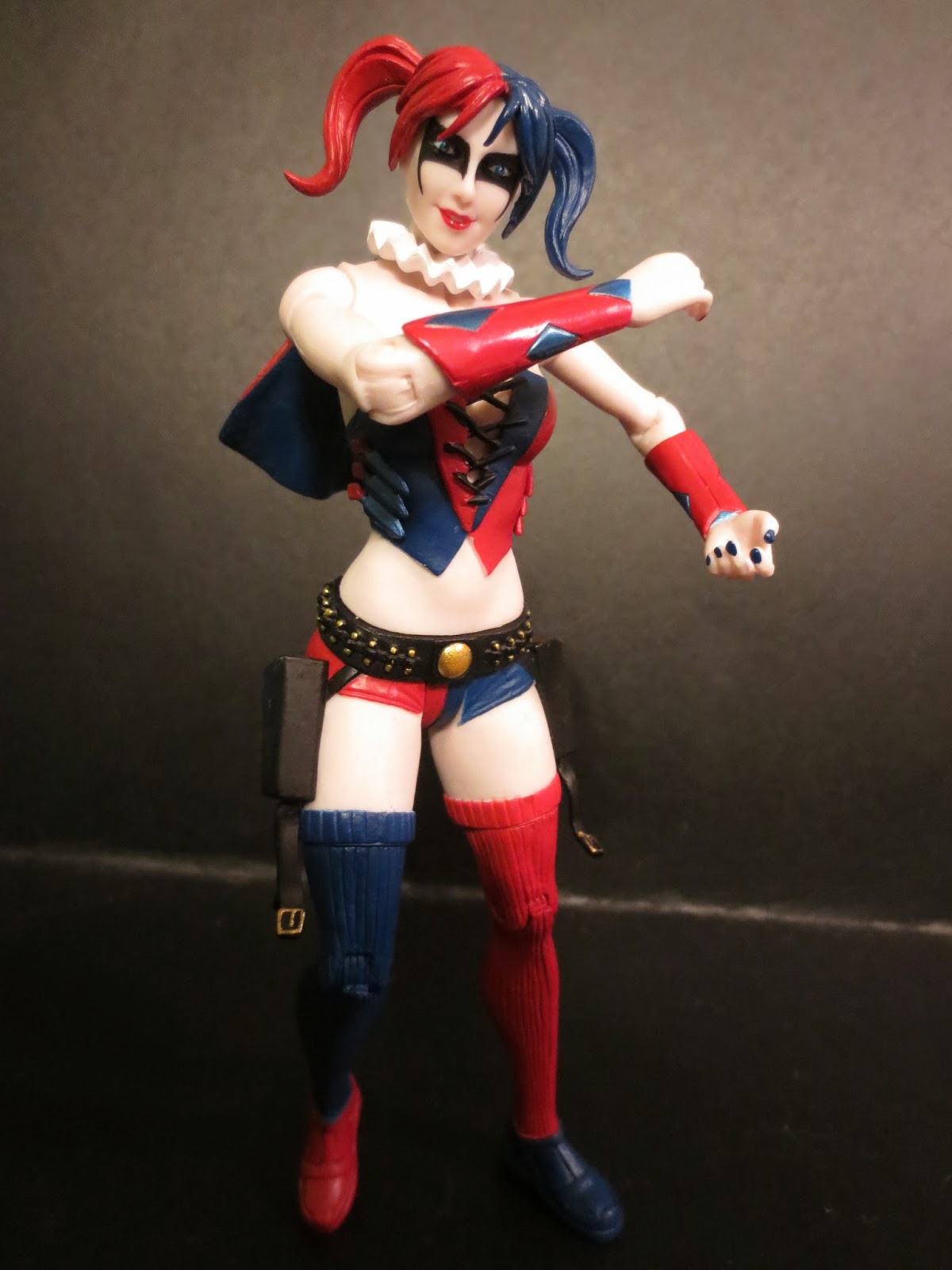 DC Collectibles seems to have two different articulation styles which they give their figures. There are more articulated figures (like the Arkham Origins Batman and Deathstroke) and less articulated figures (like Wonder Woman and Katana). Harley Quinn falls into the lesser articulated figures category, but that doesn't mean that she's completely immobile. There's still some decent articulation here: hinged knees, swivel thighs, swivel hips, swivel/hinge shoulders, swivel biceps, hinged elbows, swivel forearms, a ball jointed head, and swivel pigtails. While you won't get much movement from the lower body, the arms are articulated enough to give you some fun poses with either Harley's pistols or her sledgehammer. She feel pretty solid quality control wise and no more fragile than your average figure from NECA. Her ball jointed head has a good range of motion and the swivel pigtails are neat; just be careful that they're actually swiveling and not twisting. You don't want them to tear off! 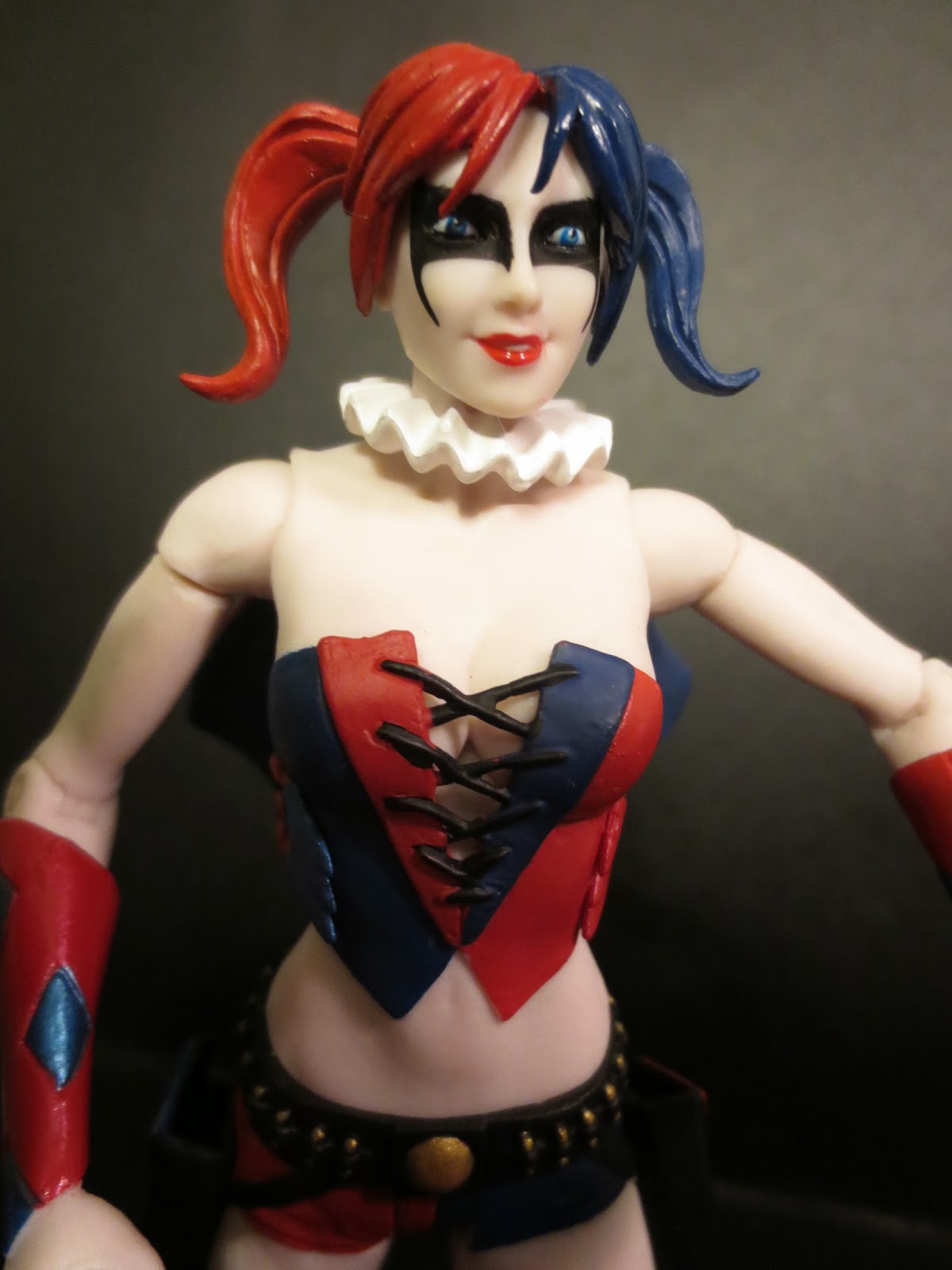 So, how much you like this figure is going to depend on how much you like this new costume. This is absolutely not my favorite Harley Quinn costume ever, but I don't see how it's out of the realm of possibility that she'd wear something like this from time to time. The figure captures the look of the costume nicely, however. There are plenty of cool details like the ribbing on Harley's thigh-high socks, the individual bullets in her belt, and the little daggers that are sheathed on the side of her corset. The lacing on the front of her corset is pretty cool too; DC Collectibles sculpted the corset's lacing as a separate piece to give it a more three dimensional. 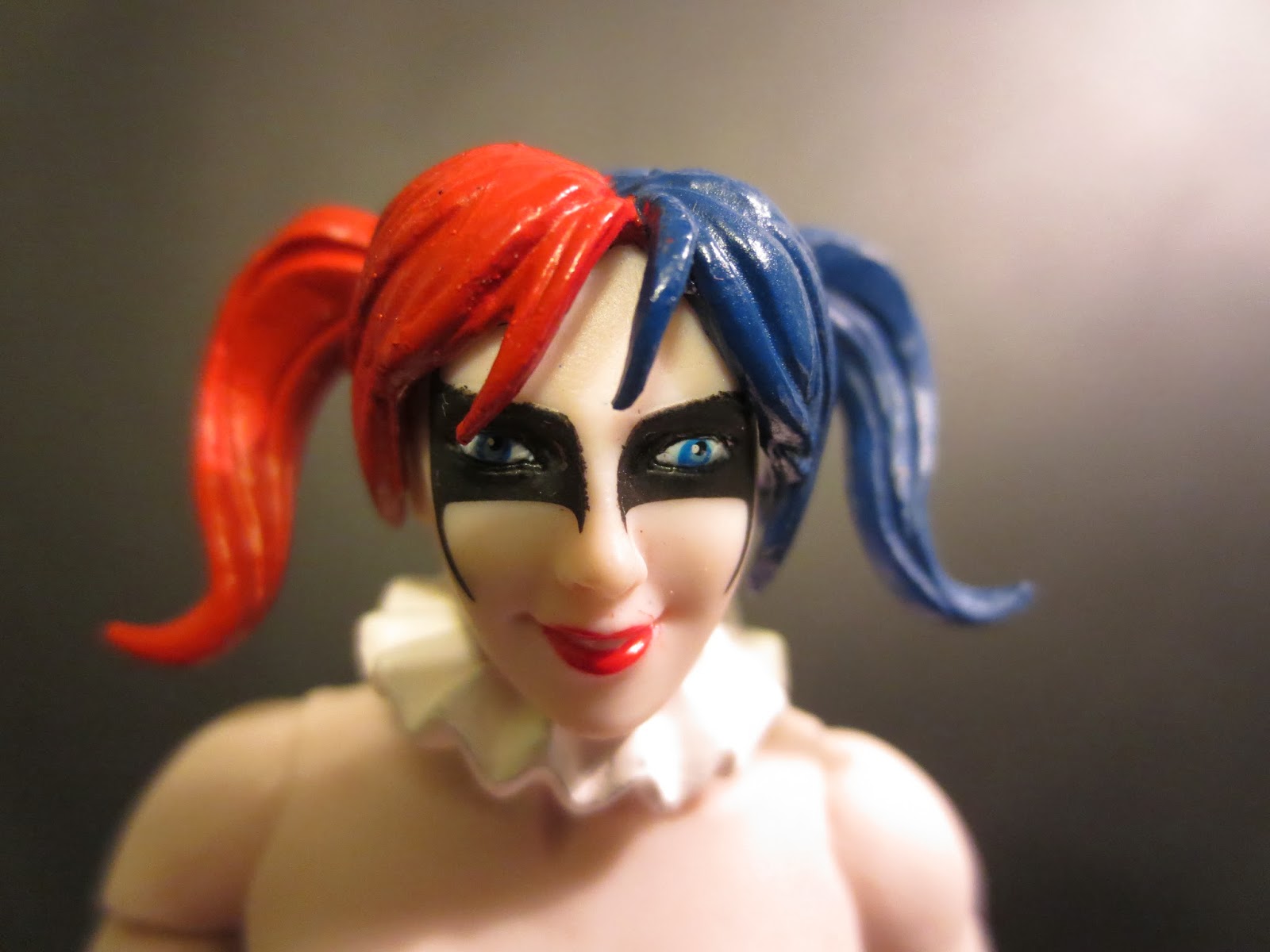 If there's an aspect of the sculpt I find fault with, it's going to be the face. It's not a bad headsculpt by any stretch of the imagination, but I'm not sure it looks like Harley to me. Maybe it's the small smile she has here? She needs something a bit more expressive. Perhaps a bigger, more sinister grin. The face to me looks like a rather cute Harley Quinn cosplayer rather than the psychopathic member of the Suicide Squad. One of the more traditional (but somehow odder) parts of Harley's costume is the ruffled collar that holds her cape on. The cape is molded in a rubbery material and can actually be removed for a different look if you carefully remove Harley's head (it's on a true ball joint). 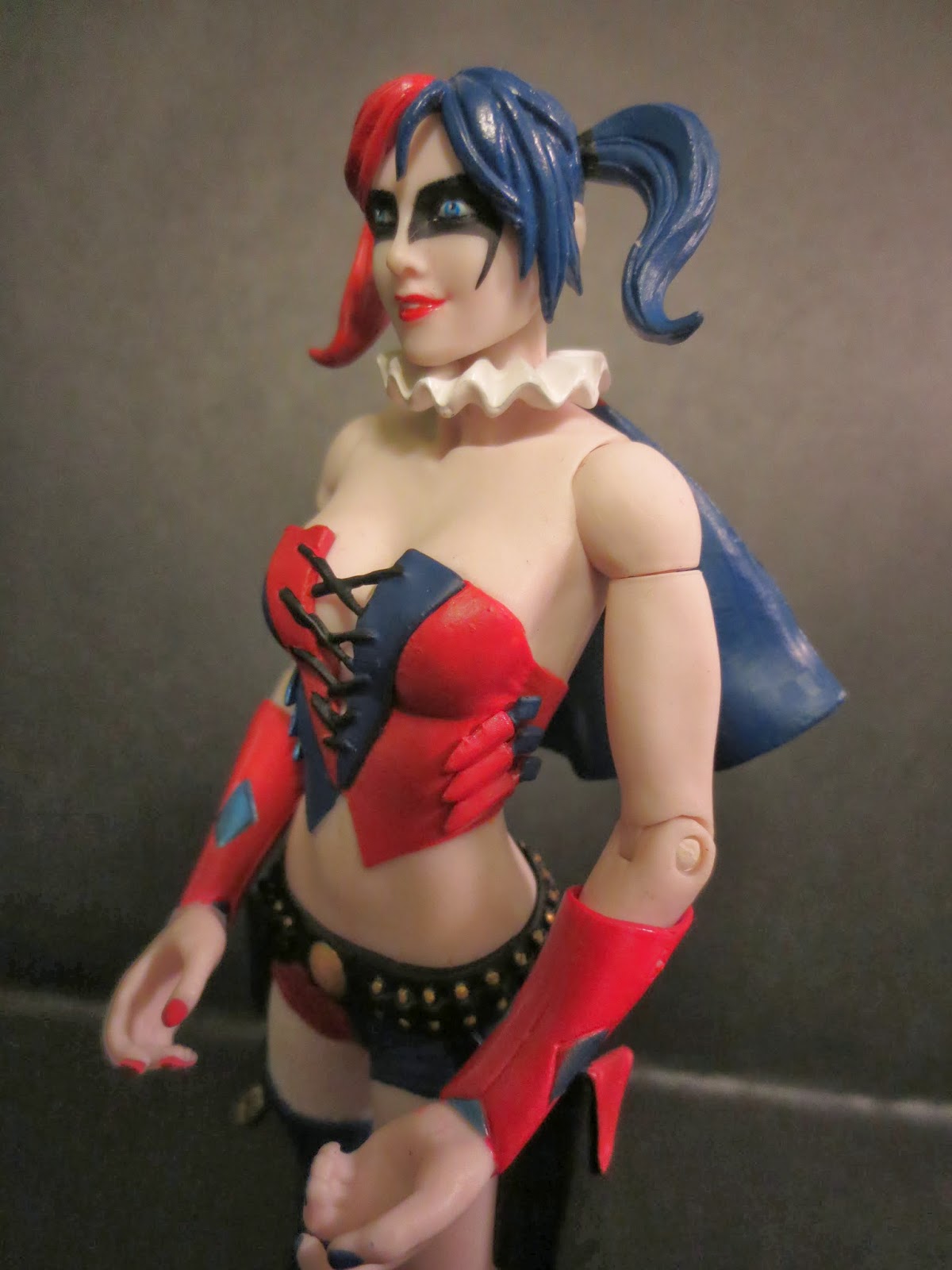 The paint work is pretty good here. I like how DC Collectibles has been molding their figures in the appropriate flesh tones and they nailed Harley's. While Harley Quinn used to be depicted as having an average Caucasian flesh tone, in the New 52 she actually has a paler skin tone; kind of an alabaster. It's actually because the Joker attempted to put her through the same transformative experience that he himself went through. The bright red and blue look great and the black highlights on her holsters, belt, and eyes bring everything together. Notice that even her nails on her hands are different (red on the right hand, blue on the left). The only part of the paintwork that looks messy is the cape, but rubbery plastic is always hard to work with and get the paint to stick correctly. 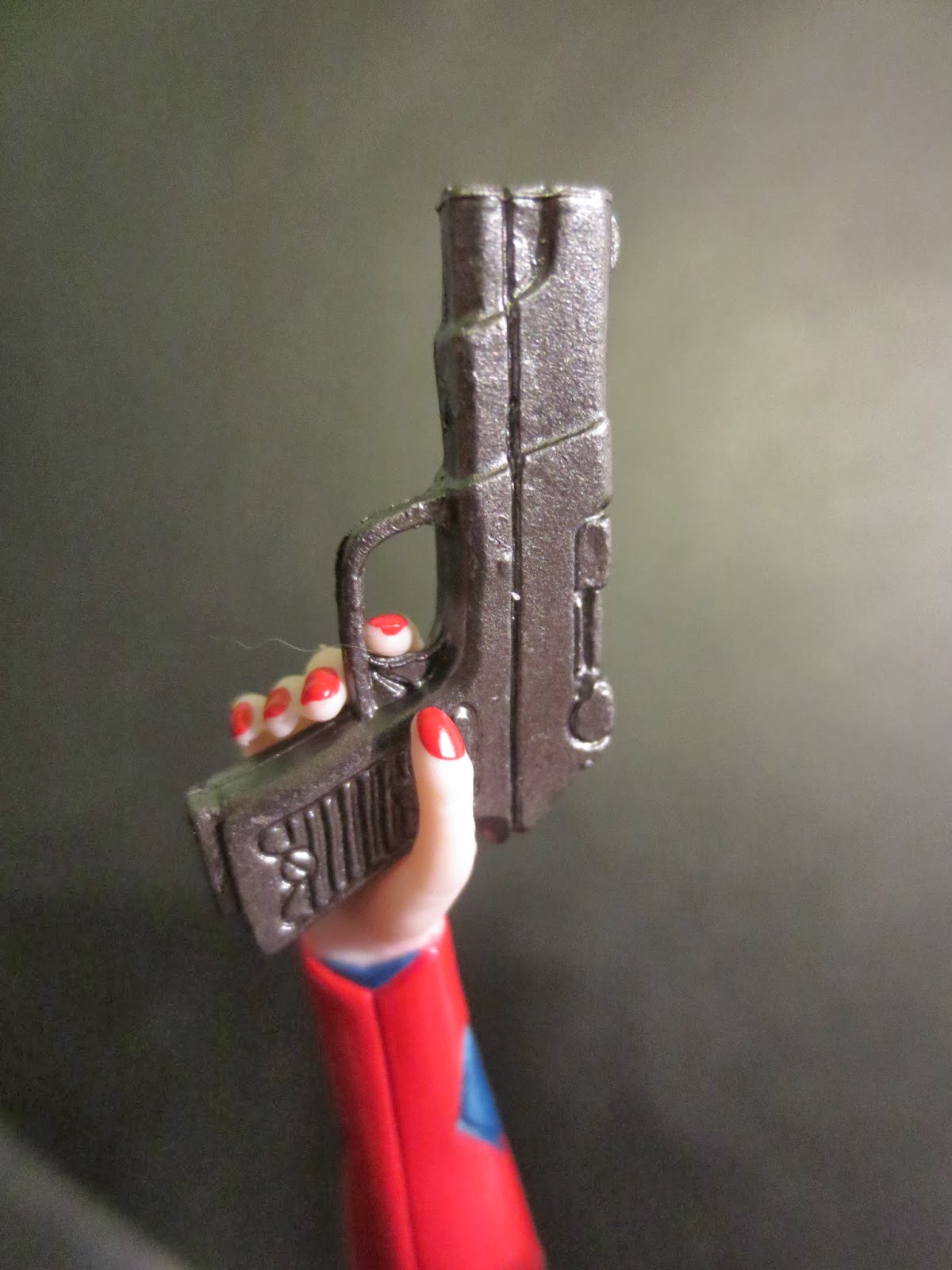 Besides the removal collar/cape combo, Harley comes with three accessories! First, she comes with two really cool pistols. While they manage to look just a bit oversized, they still fit great in her hands or in the working holsters sculpted on her hips. 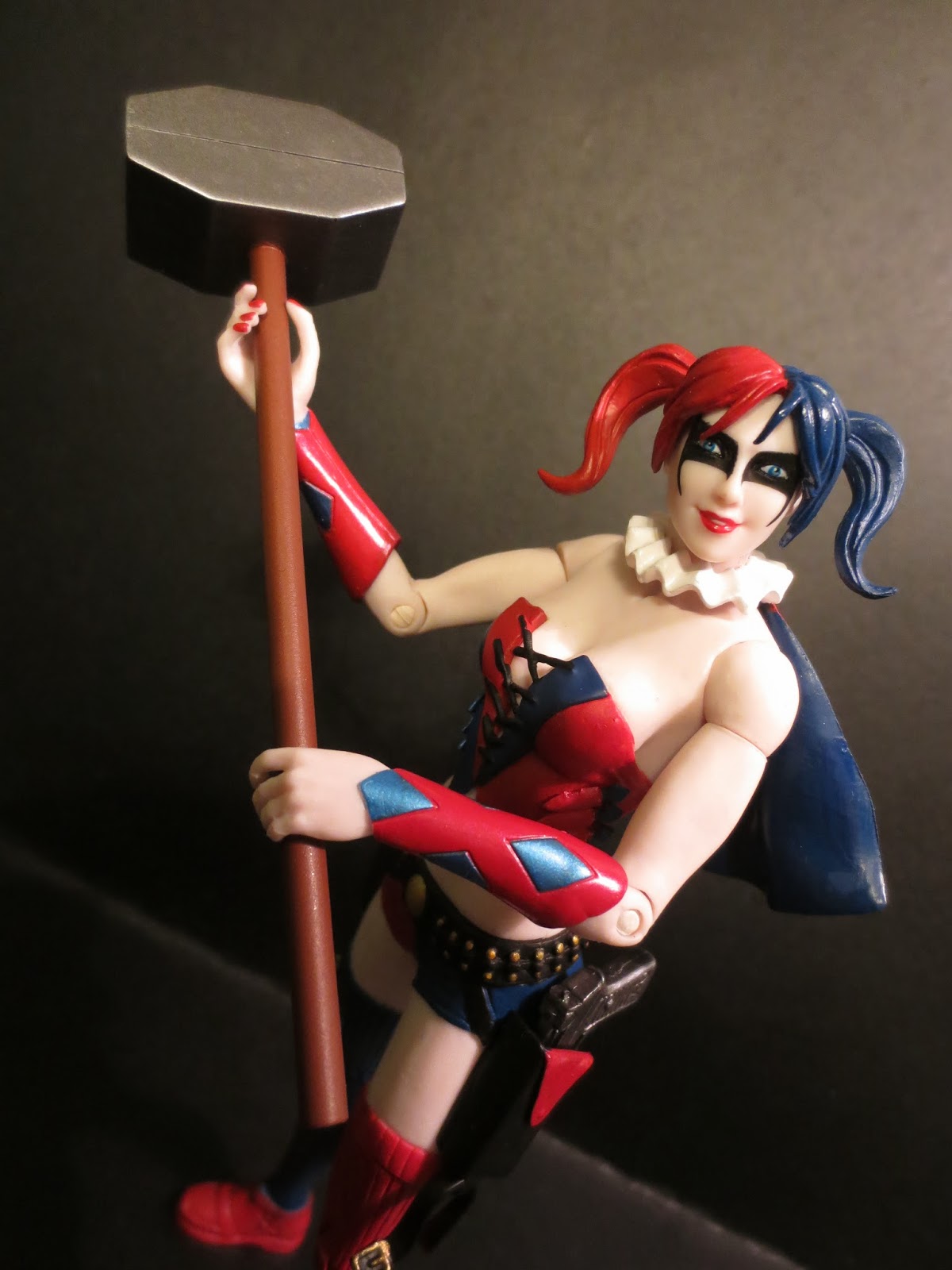 Secondly, Harley comes with her sledgehammer. While an oversized mallet is typically Harley's weapon of choice, she used a sledgehammer a few times in Suicide Squad so I'm glad this accessory is included. You could always use it to make a custom Annie Wilkes from Misery or Tollbooth from G.I. Joe. The handle feels like it might be a tad fragile, so be careful, but overall I'm loving the way the head of the hammer is molded in a metallic plastic. I'm really liking the great accessories that DC Collectibles has been giving their figures lately and I hope it continues. 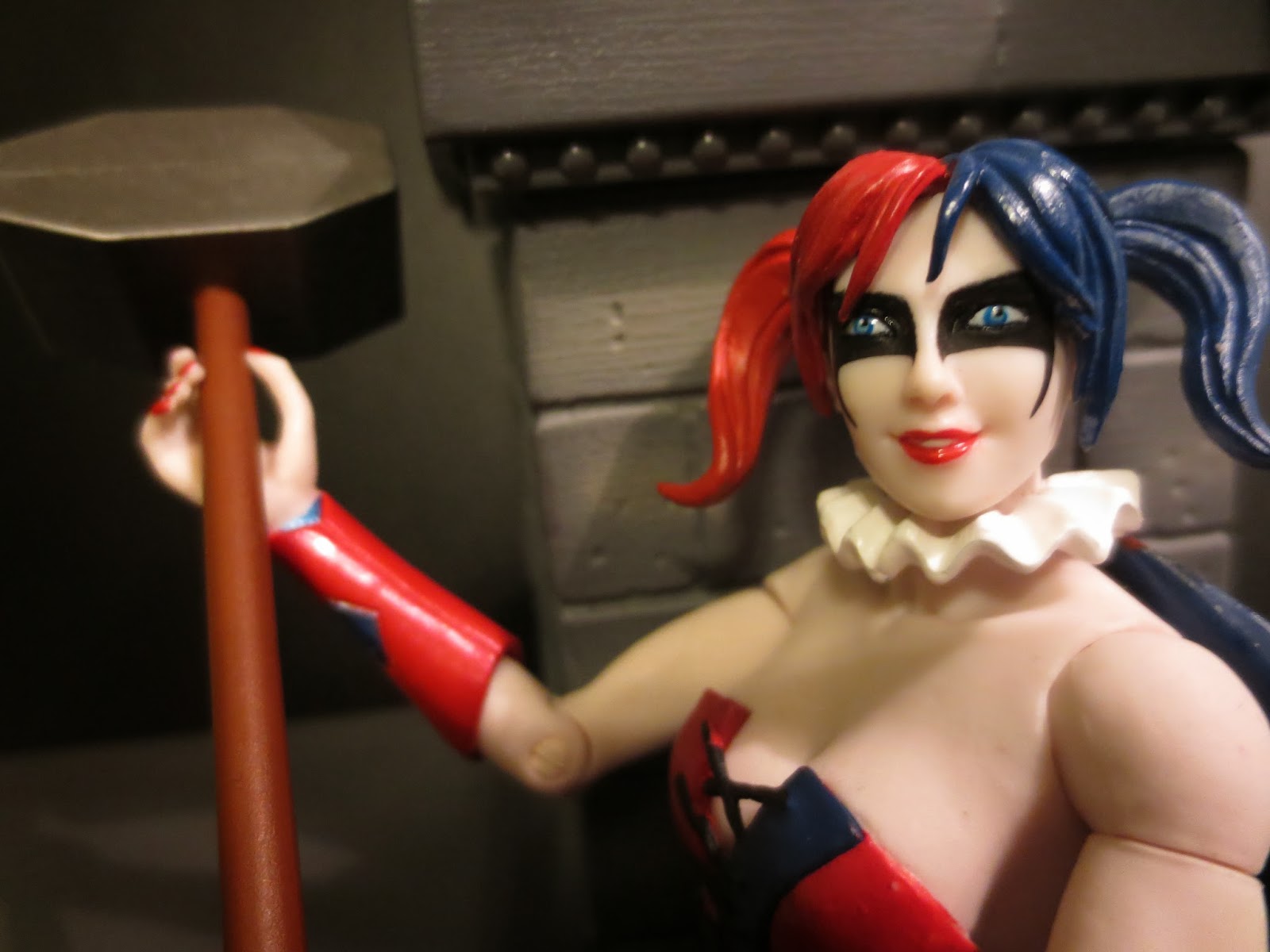 While I know a lot of Harley Quinn fans don't like this costume, it's evident there are plenty that do as well as the statue of the character from the New 52 sold out and is going into a second edition. I'm probably in the middle. While I don't think this is the best costume Harley has ever worn, I'm definitely glad to see DC try something new with her look. She pretty much wore the same thing from 1992 until her appearance in Arkham Asylum changed things up a bit. Actually, the Arkham Asylum nurse outfit (probably my favorite Harley look) really initiated a lot of the changes we see in the New 52 outfit such as the use of alternating red and purple or blue, a corset, and the visible hair that have also been present in her Injustice: Gods Among Us and Arkham City costumes. Regardless of your feelings towards Harley and the changes DC has made to her, I don't think there is any denying that DC Collectibles did a fantastic job translating her into an action figure. Great sculpt, paintwork, and accessories really come together to make a nice looking Harley Quinn figure that can stand alongside either the members of Suicide Squad or the other Harley Quinns on your shelf. There's no wrong way to display Harley, puddin'! I'm giving the figure a Great and a 1/2 overall.

Interested in a Harley Quinn of your very own? Who could blame you? Head on over to Big Bad Toy Store and pick her up today!