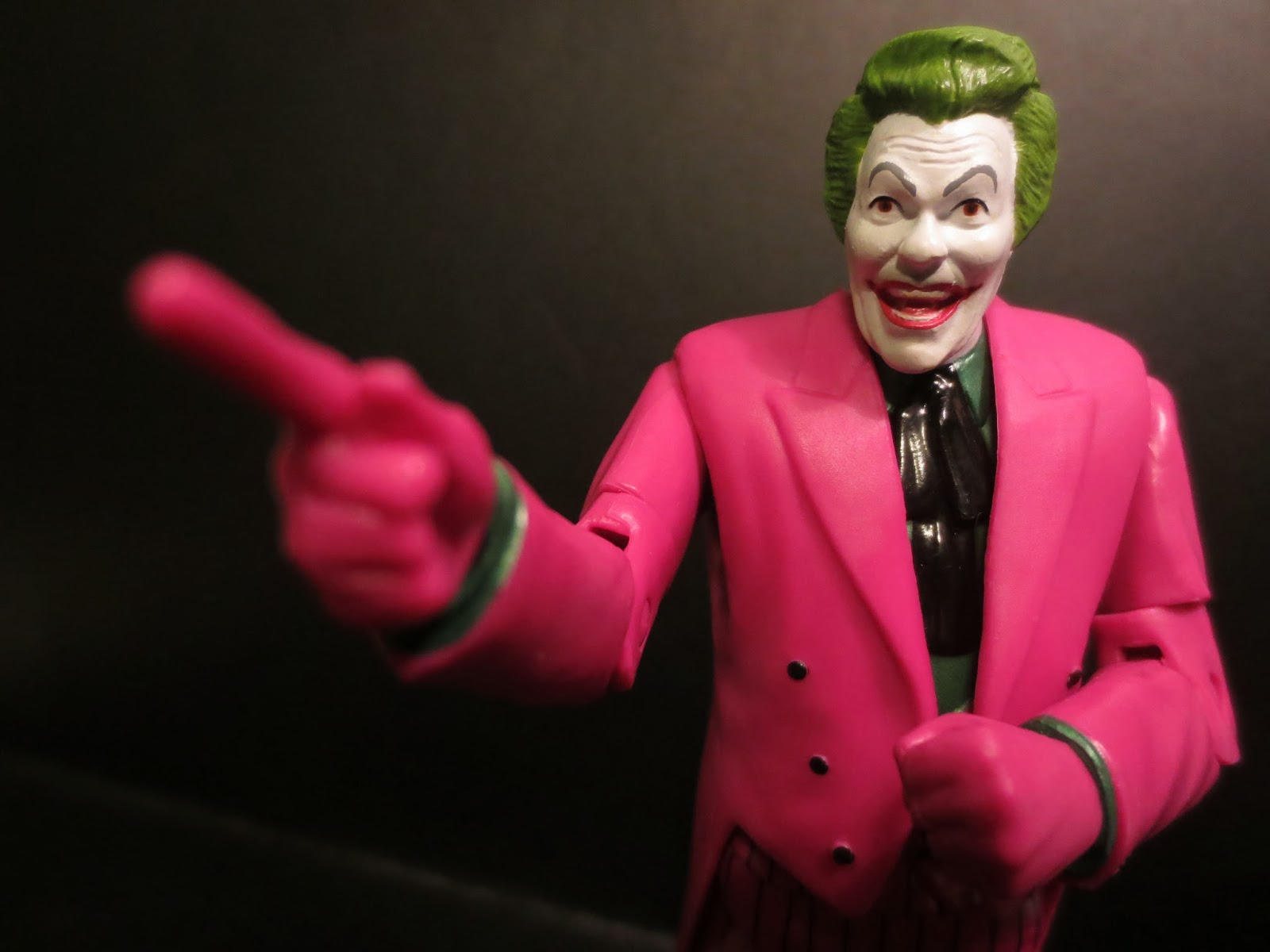 There is no villain in comics that is more recognizable than the Joker. While he's been a long term Batman foe, much of his continued popularity can certainly be attributed to Cesar Romero's portrayal of the Clown Prince of Crime in the 1966 Batman TV series and the accompanying film. My guess is that for most fans of the 1966 Batman TV series who wanted action figures, the Joker and Batman were at the top of the list. While Romero's tone for the Joker was certainly a lighter, more whimsical approach to the character that was more in line with then contemporary representations of the character rather than the earliest representations, he certainly crafted an influential and lasting version of the Harlequin of Hate that has remained a fan favorite. I probably have more action figures of the Joker than I do of any other Bat character other than Batgirl and Batman himself, so how does this one stack up? Read on and find out, after the break.... 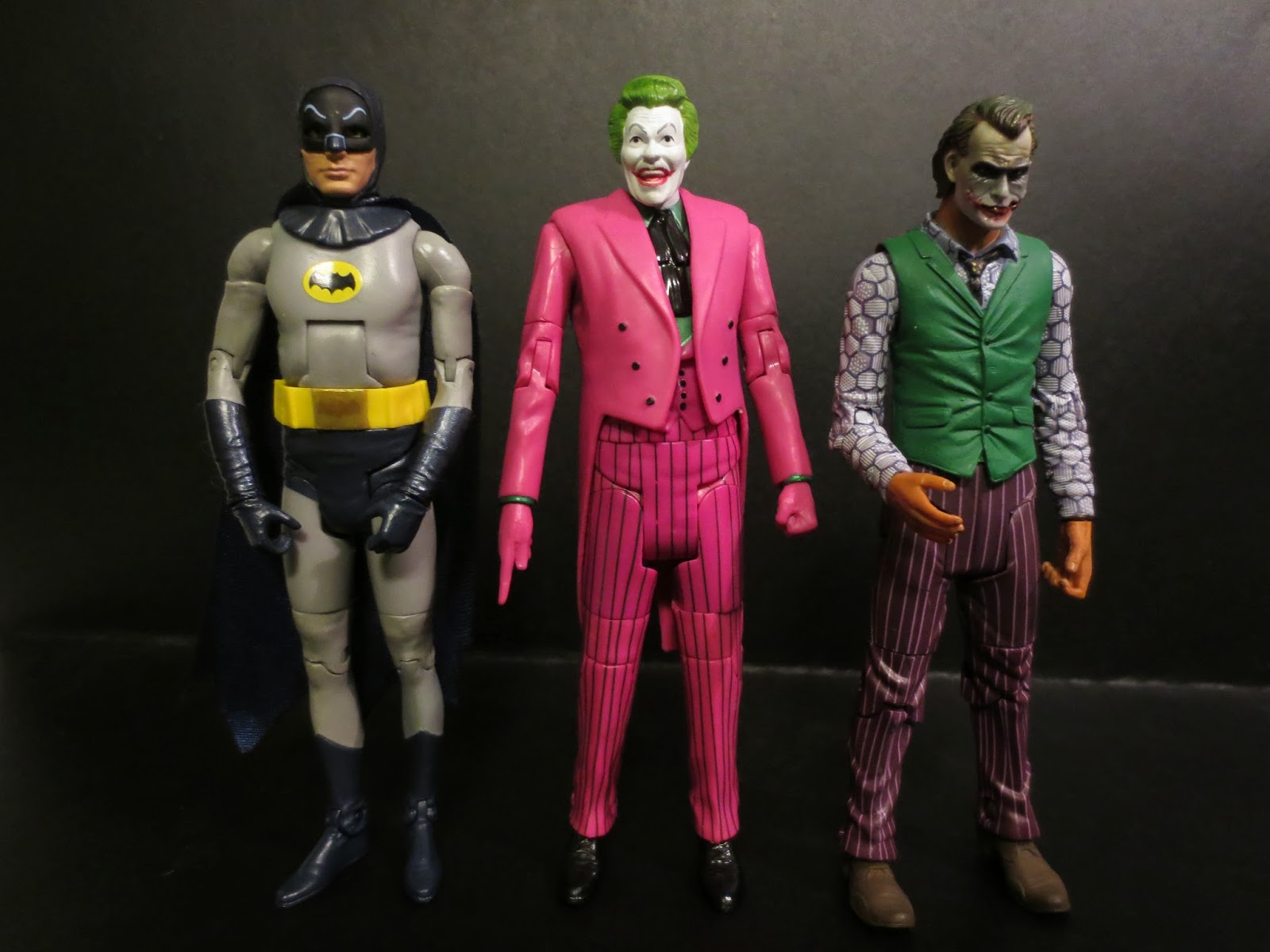 Cesar Romero was 6' 2", the same height as Adam West, and this guy stands 6 1/4 inches tall, pretty much the same as the Adam West Batman figure. Pretty nice attention to scale, Mattel! Like the rest of the 1966 Batman figures (or the "Classic TV Series" figures, as Mattel calls them) the Joker features a sculpt that is equal parts realistic interpretation and caricature. Mattel created all unique bodies for each figure in the line, which means that this Joker doesn't use that same suited body that Mattel used for about 50% of the Movie Masters line. 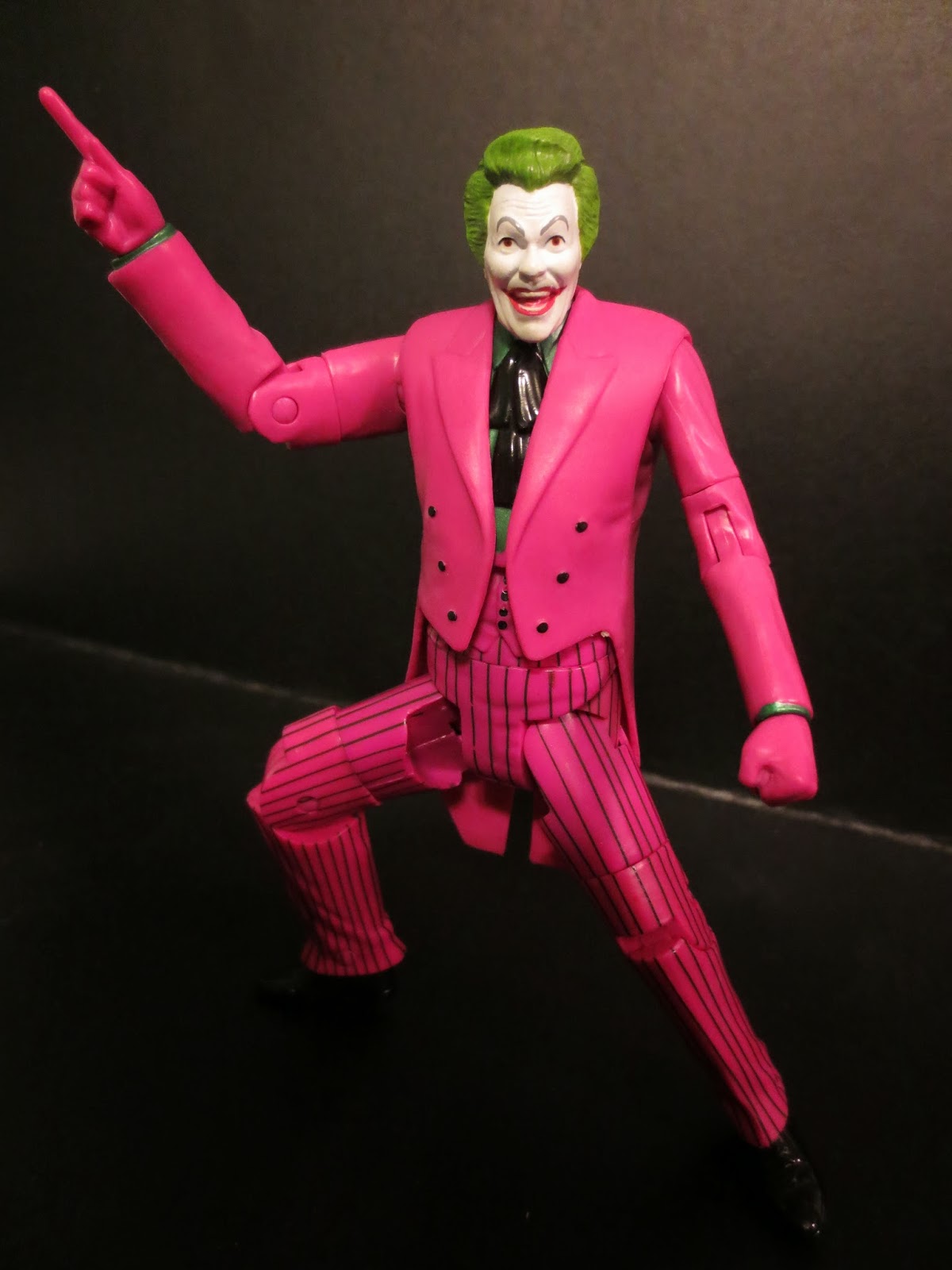 The Joker has a bit of articulation so you can get him in a fun pose or two. He features: hinged ankles, hinged knees, swivel thighs, H-hinged hips, a swivel waist, an ab hinge, peg/swivel shoulders, swivel biceps, hinged elbows, swivel wrists, and a ball jointed head. Everything works fine and seems very solid, although the ball jointed head, like most in this line, really doesn't have much of a range of motion. I always find ball jointed heads to be the most expressive part on a toy, so it's a shame that this one is not more mobile. The ab hinge is barely noticeable, both stylistically and functionally. I didn't realize it was even there until I was checking this figure from head to toe, but it also offers little to no movement. I will point out that because he's wearing a snazzy suit, the articulation cuts are more visible than on figures that have form fitting outfits like Batman and the Riddler. Not a major issue, but one that some people will take issue with. 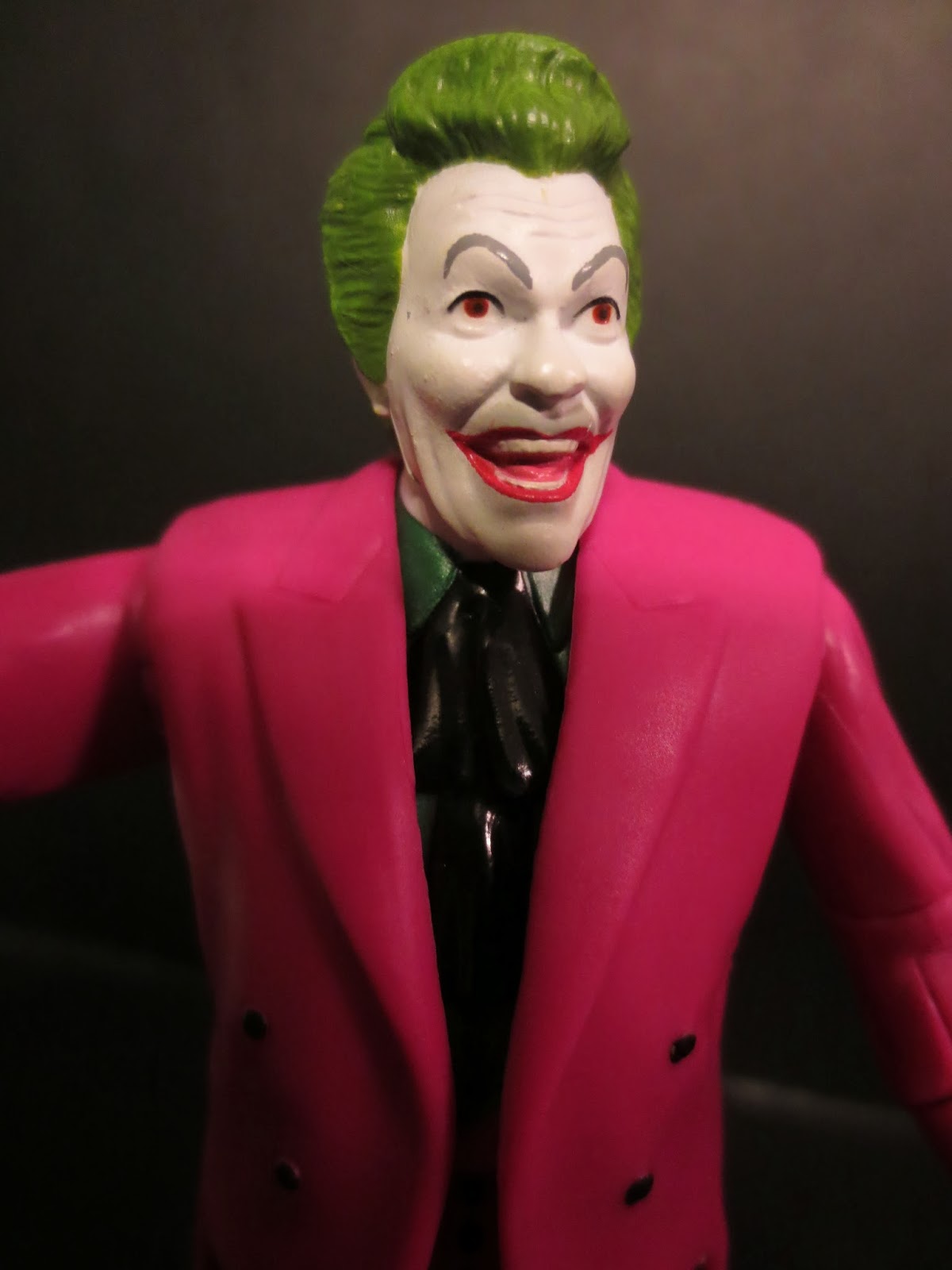 Like most of the 1966 Batman figures, I really did not like this guy initially. He seemed overly stiff and awkward. The more I've had him around, though, the more I've come to really enjoy this sculpt. I still have a few problems with it, mostly with the shoulders and the way the pants look like they're so high up on his waist. It just doesn't seem to match Romero's build and makes the figure look overly heavy and brutish. The details look good, though, and elements such as Joker's coat and all of its buttons look great. I like the choice of giving the Joker an extended pointer finger on his right hand; that digit makes for so many great poses that really bring some character to the toy. The headsculpt is pretty fantastic, too. It really, really looks like Romero, particularly from about a foot or two away. When he's in hand you might find the sculpt a bit soft, but as he's sat on my desk for the past week or two, I've been constantly surprised by how much I like him. 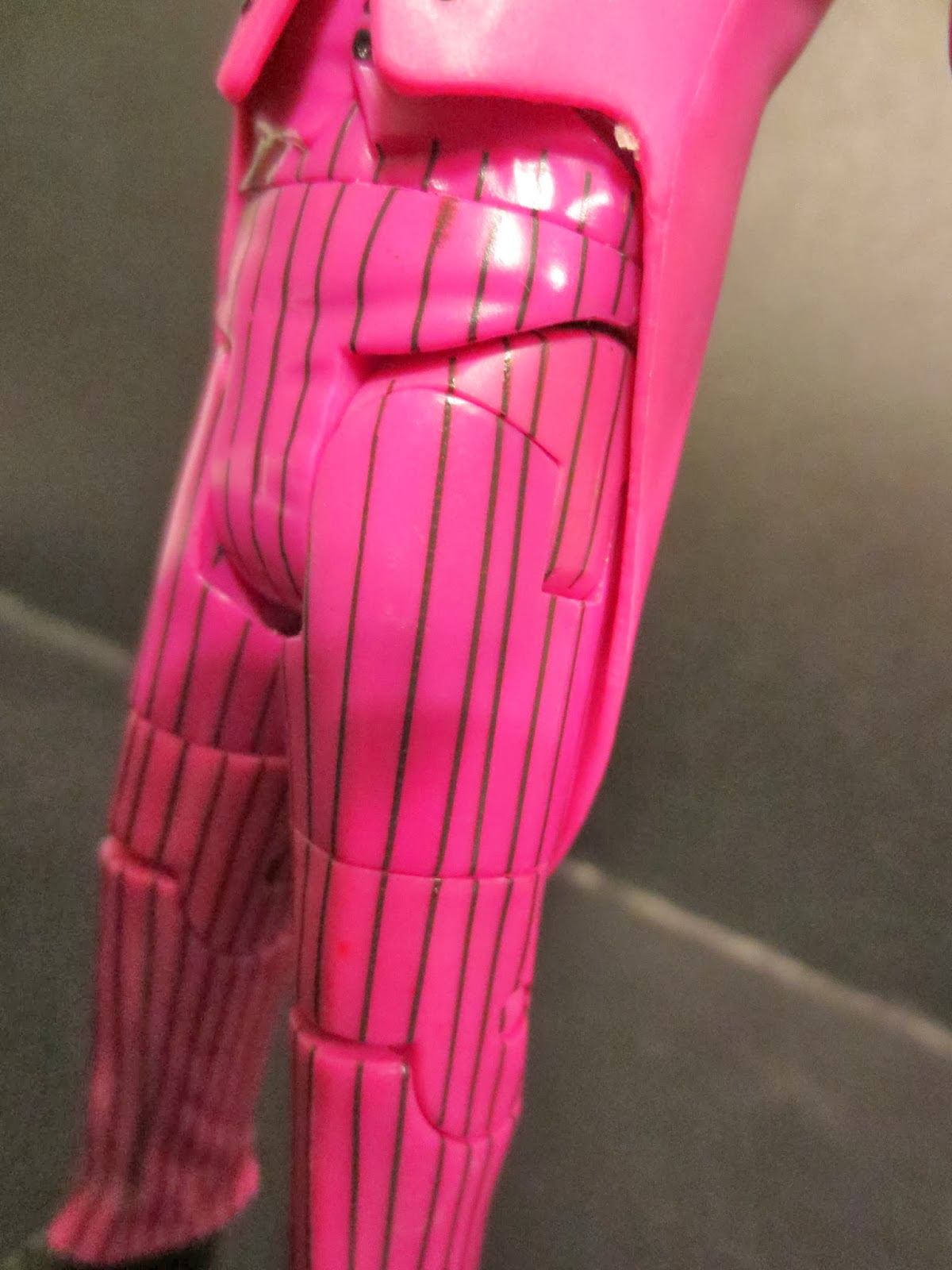 For younger readers who might not be familiar with the 1966 TV series and only know the Joker from the Arkham games or The Dark Knight, I will say that yes, this outfit is accurate. The Joker did indeed wear this bright, vibrant, almost pink suit. And he rocked it. Mattel nailed the color pretty well and made the details really clean, but they messed up one aspect in a pretty major way: not each part is the same color. Most of the pinkish purple on the Joker is molded in that color plastic (not painted) and the legs are actually too different colors. The lower legs and upper thighs are very pink while the waist, stomach, and lower thighs are more of a purple. It looks incredibly awkward once you notice it, and of course once you see it you can't un-see it. The headsculpt has been painted well. Since Romero infamously refused to shave his mustache for the television series, white paint was simply applied over it as part of his make-up. Rather than sculpt the mustache, Mattel chose to give a very, very light gray paint app above Joker's upper lip. It works, particularly because Romero's mustache was often visible in the show. 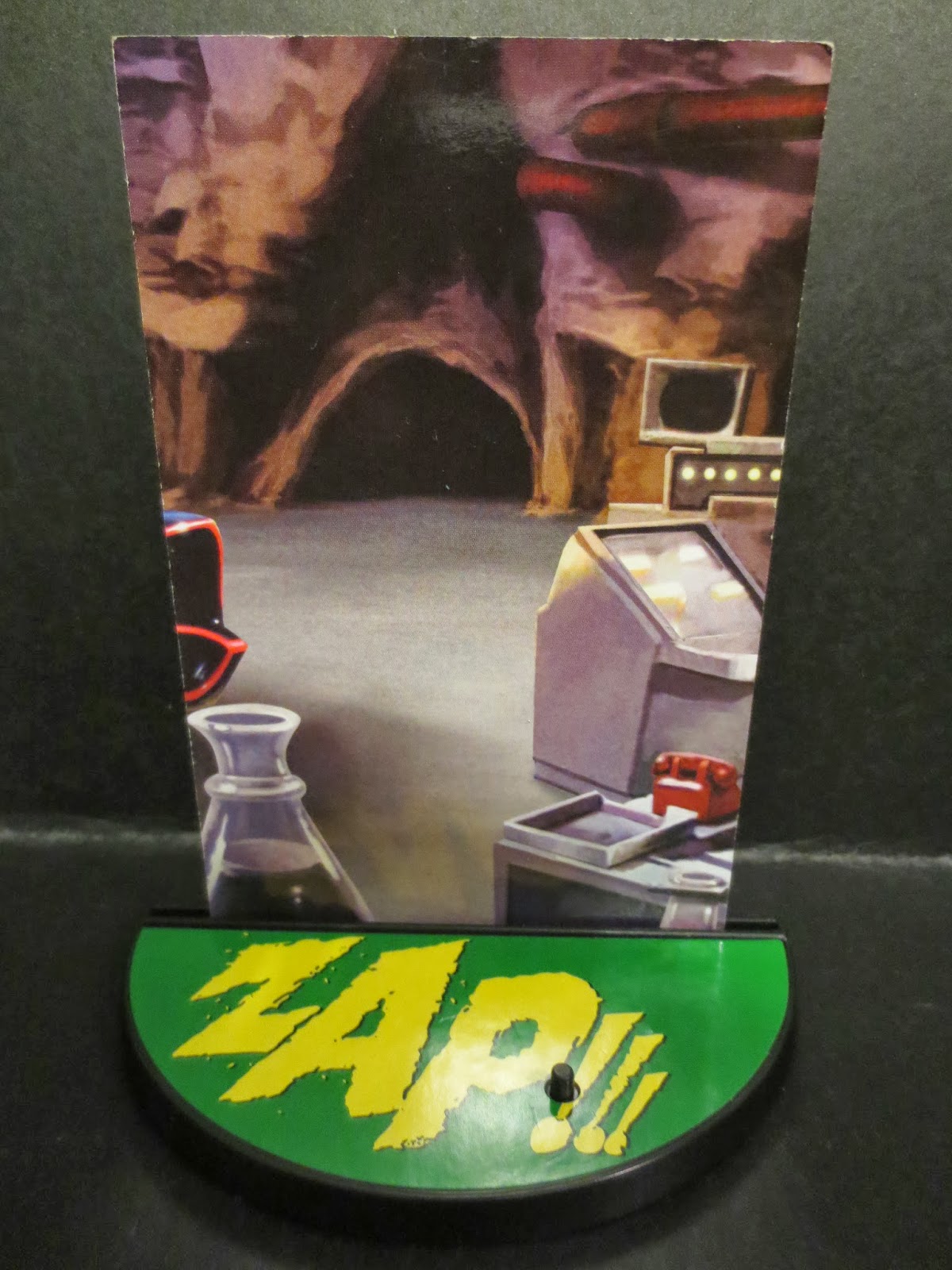 Once again, while the Joker comes with a cool semicircle stand (his says "ZAP!!!") and a double sided trading card (one side a nice painting of Joker, the other an image from the Batcave), he doesn't come with any hand held accessories. The show had so much wacky, weird stuff that I really wish every figure had come with something. Even stuff for Batman such as a giant bomb, shark repellant, or the Bat-phone (and yes, I know some of that stuff was actually in the movie and not the series). 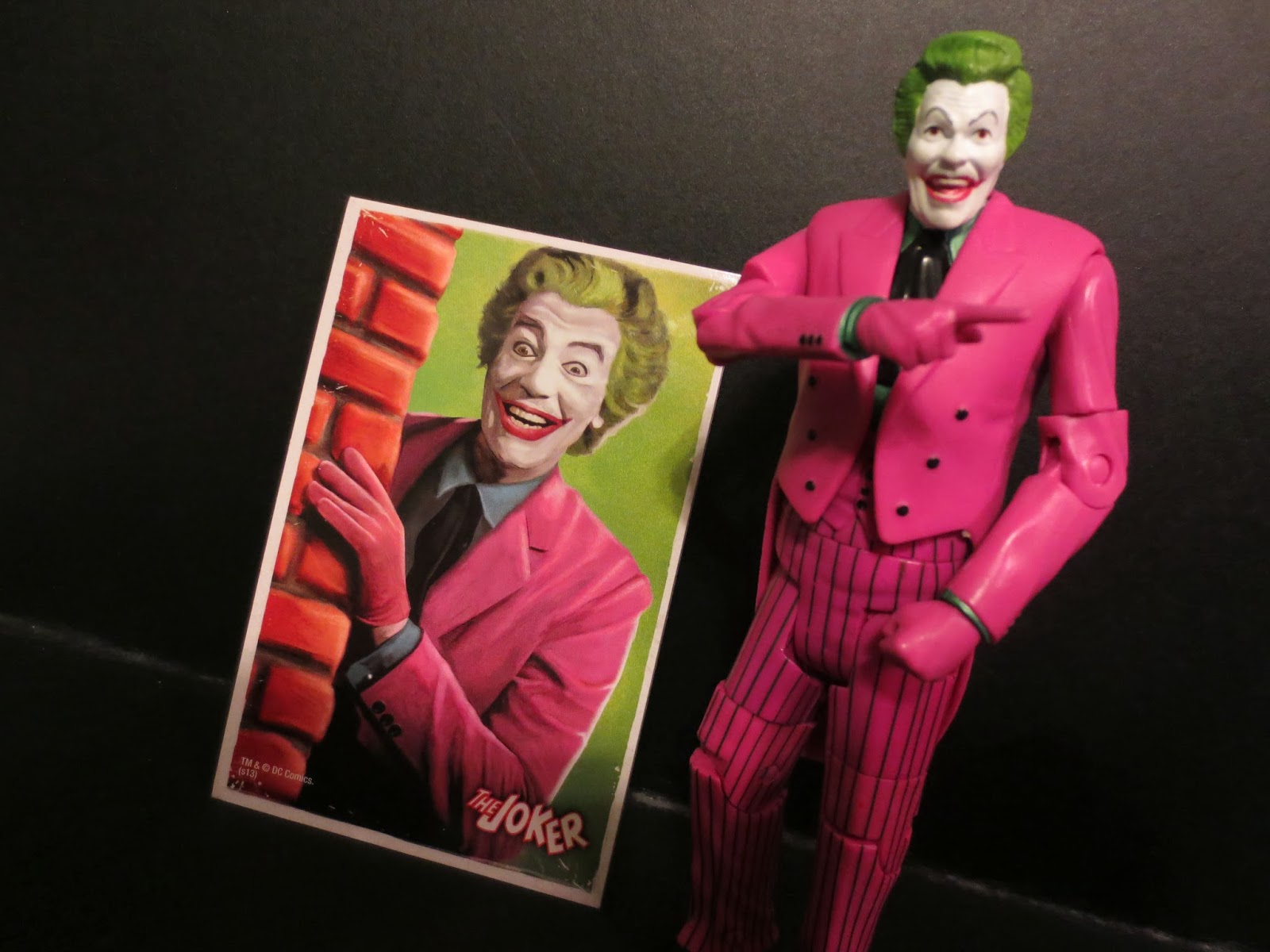 The Joker is a really mixed bag for me. While I like things like his headsculpt, bright outfit, and clean paint apps, I'm also torn on things like his over-sized shoulders, discolored legs, and lack of accessories. At the end of the day, I'm giving the Joker a rating of Good. If you're a fan of the 1966 show, I'm not sure that you'd really be able to pass this figure up. It has some real issues, but it also has some real strengths. There's nothing that makes it super memorable other than its being a Cesar Romero Joker action figure, but I guess in the end that's really all it needed to be. Mattel has shown a "Surf's Up Joker" figure which I hope eventually gets released as part of a future series of these figures. Honestly, I've never seen these guys really peg-warming anywhere so they've got to be fairly popular so even if this line became a Mattycollector exclusive in the future, I'm sure it could last a bit longer. At least until we get Batgirl, King Tut, Egghead, suited Riddler, and a two-pack of Lee Meriwether and Eartha Kitt Catwomen figures. 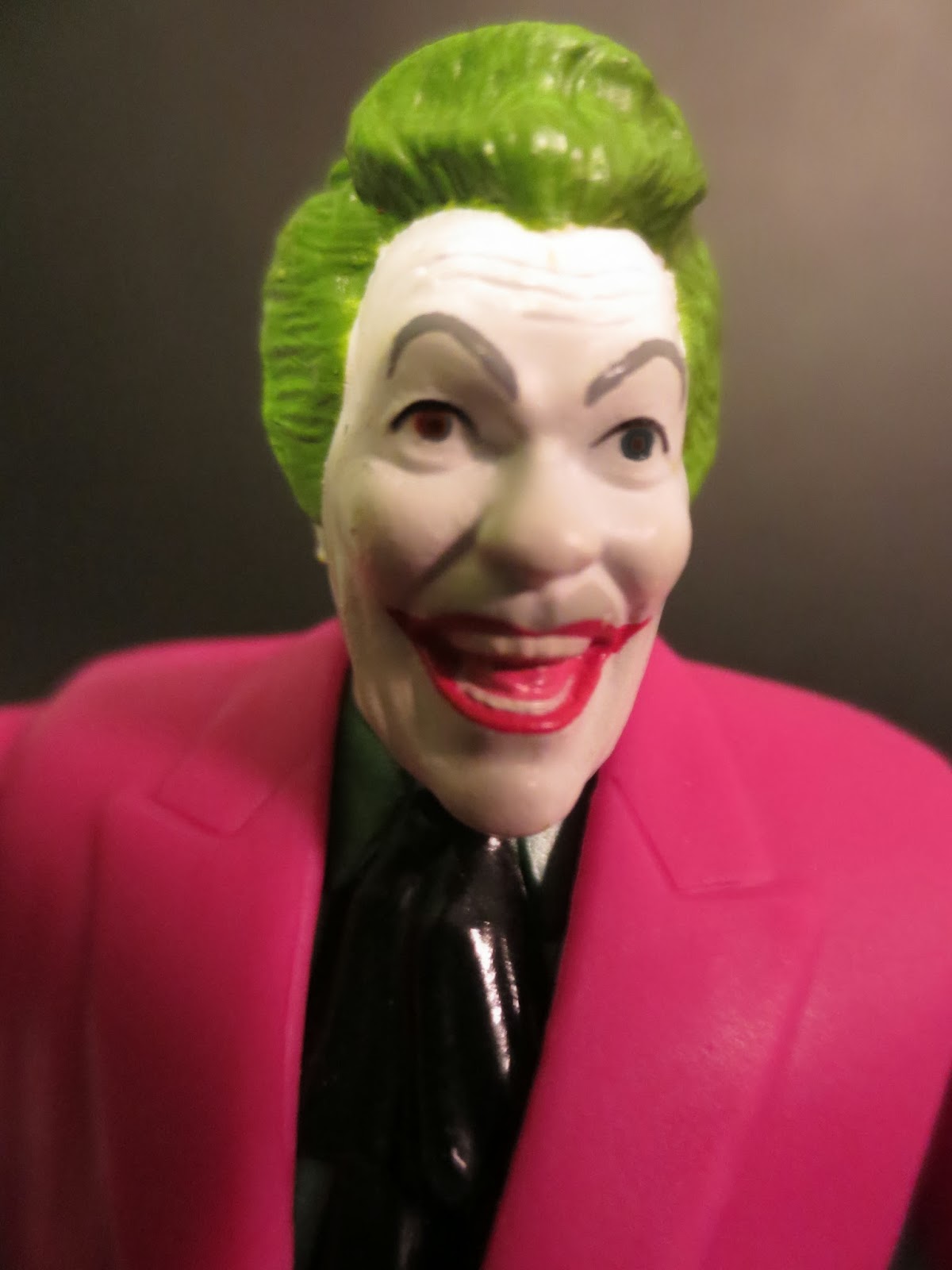 If you're interested in a Joker of your own, you can order one easily from Big Bad Toy Store right now!
I've also reviewed the following other figures from this line:
Batman
The Penguin
The Riddler
Surf's Up Batman