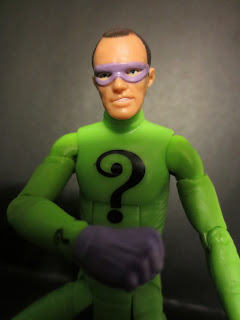 I'm back with another review from Mattel's Batman: Classic TV Series line based on the 1966 Batman television show. If you remember, I really wasn't impressed by this line at all when it first came out. The only figure I bought was the standard Batman and I found him to be really awkward and sub-par. During the days leading up to Christmas, however, I managed to pick up all of the single carded figures for around $5 each. Honestly, I'm kind of an easy sell when it comes to action figures of Batman's villains and I decided I needed to snag these for a project I'm working on. I picked up Surf's Up Batman and was surprised by how much I actually liked him. Today I'm taking a look at my first villain from this series, the Riddler as portrayed by Frank Gorshin in the first and third seasons of the series, as well as in the film Batman: The Movie.

Originally appearing in 1948, the Riddler is an interesting character who spent many years being sort of a Joker-lite. While he was more compulsively obsessed with puzzles and riddles than the Joker, both of them sort of had similar personality traits. During the 1980s, when the Joker's much darker personality really began to reemerge (the oldest Joker stories were pretty dark), the Riddler began to find his niche. Soon after, in Batman: The Animated Series, we saw the next development of the character as a brilliant, somewhat suave individual who compulsively felt the need to challenge Batman's intellect. While the Joker was Batman's equal in willpower, the Riddler truly was Batman's equal in brainpower. I always see portrayals of the Riddler as fitting in one of two camps: the laughing and goofy prankster or the cool, calculated mastermind. Gorshin's portrayal of the character might just be the definitive representation of the prankster version of the Riddler ever. Ready for a look at the figure? Then join me after the break.... 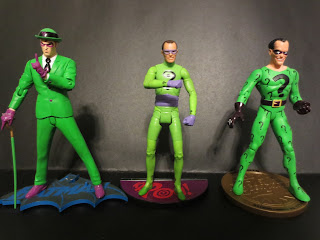 Riddler is 6 1/4 inches tall and looks very much like a caricatured version of Frank Gorshin's portrayal of the character. I'm really impressed with this line that Mattel gave us unique sculpts for each character that fairly accurately match the body builds of the actors. The style isn't the photorealistic style that you'd expect from a company like NECA or Diamond Select, but instead is much more akin to Mattel's Movie Masters or the humans in Hasbro's Star Wars Black. 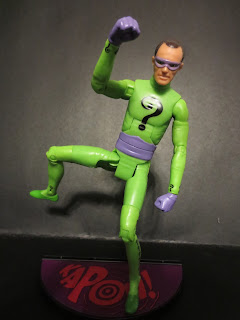 Gorshin was a master impressionist and really used some fantastic body language to portray the Riddler as a dynamic foe, so it's fitting that the figure has an excellent amount of articulation. The Riddler features: hinged ankles, hinged knees, swivel thighs, H-hinged hips, a swivel waist, a hinged abdomen, swivel/ hinge shoulders, swivel biceps, hinged elbows, swivel wrists, and a ball jointed head. Everything works fantastically and offers a great array of motion except for the head. The ball joint allows for very, very little vertical movement. Since ball jointed heads can be the most expressive joint on an action figure, I find the absence of a great ball joint to be extremely disappointing. Otherwise, you'll have lots of fun putting this guy in crazy poses. 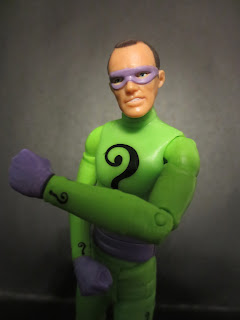 I mentioned above that Mattel created unique bodies for each character in this line and I think they did a good job of capturing Gorshin's build. Not a lot of real life human men can pull off a spandex unitard, but Gorshin did. The design of the costume itself is pretty simple (it's mostly the colors that make it stand out) so there's not a lot of fine detail. Some folds and wrinkles here and there, and of course the odd belt that the Riddler wears. The head sculpt isn't bad, but it's a bit plain compared to how much expression Gorshin gave the character. Just Google him; the guy had some amazing facial expressions. Mattel chose to sculpt Riddler with his mask on, although I honestly think he was seen more often without it. 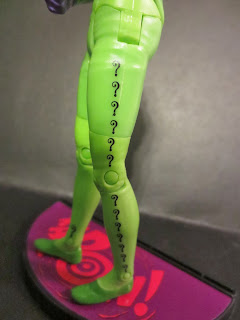 The paint work is good. It's nothing super fancy but it certainly makes the figure jump out at you. He's mostly molded in birght green plastic with purple gloves and belt. The gloves are fine, but the belt seems to have some of the green plastic underneath showing through. The booties that Riddler wears are also painted a darker green color to differentiate them from the rest of the outfit. I love the question marks that cover Riddler's outfit. All down his legs and around the cuffs of his sleeves are neatly stamped black question marks. There's also a large black question mark on his chest. Unfortunately, mine had a bit of slop around one of the edges of it. Still, I'm pretty happy with the level of paint detail on the figure. 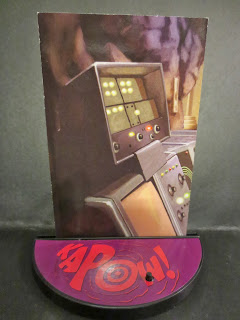 Here's a category where I'm a bit disappointed: other than his stand and oversized trading card/ backdrop, the Riddler comes with no accessories. His hands are also sculpted into fists, so you couldn't really give him anything anyways. Surely Mattel could have easily picked some bizarre object from the show that was used. Still, I'm quite happy with the base (it's a semi circle with a foot peg and a sticker that reads "Kapow!") as I always love stands. The trading card is a nice, thick, double sided cardboard element that can slide into a groove on the base. One side features a painted image of Gorshin as the Riddler while the second side shows part of the Batcave's computer system. The image seems to be part of a larger scene that will be assembled when all of the cards from each figure are put together. 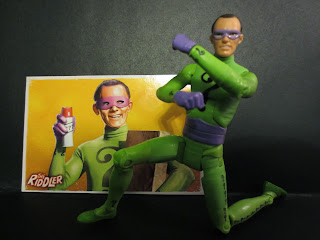 While this isn't the be all/ end all of Riddler action figures, it's definitely a good representation of a key depiction of the character in Batman history. I wish there were some more accessories included and a better ball jointed head (problems I had with Batman) but I'm pleased by the rest of the articulation, the bright outfit, and the sculpt. Overall I'm giving the figure a Good rating. While the future of this line seems rather unsure, I would love for Mattel to revisit the Riddler again. Not only could Gorshin's fantastic suit and hat outfit be implemented into the line as a variant but we could also see a John Astin version of the Riddler (he played him in season 2). While I initially was completely underwhelmed by this line, I have found more to like about it as I've picked up a few more of the figures. I think Mattel definitely has a few more figures they could easily make and probably could carry the line on a bit longer if they desired. Let's hope the line pops up again this year with some more offerings (particularly Batgirl).

If you're interested in picking up this guy, he's available at Big Bad Toy Store right now! I've only reviewed one other figures in this line so far, Batman , but I plan to review a few more in the future.