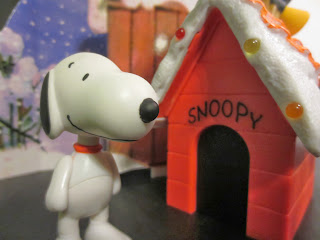 Originally airing on December 9th, 1965, A Charlie Brown Christmas without a doubt holds the title for this author's favorite Christmas special (my second is "Merry Christmas, Mr. Bean"). It's blend of Christmas spirit, holiday activities, and strong messages are always refreshing to me. In fact, when I was in 8th grade I adapted, directed, and played Linus in a school adaptation of A Charlie Brown Christmas. I've always liked Snoopy, but my appreciation for the character has grown as I've come to have dogs of my own. One of the four legged residents of my house is what I believe to be a Jack Russel/ Beagle mix of some sort. When we first found him I gave him a red bowl which, when emptied, he would drag around the kitchen or spin with his nose to let us know he wanted more food. For some reason, he reminds me of Snoopy (he's white with black and brown ears). Long story short, I was really excited to receive this Snoopy action figure set as a Christmas present this year. Over the past few years a number of companies seem to out out Peanuts action figures and Christmas themed toys in a variety of scales, but this wasn't one I recall seeing before. The figure is marked 2003 while the box says 2012, so I have no clue when this thing was actually released. Big Bad Toy Store has it listed with their 2013 Peanuts items, so perhaps it's new? It's a great set, though, that features a Snoopy action figure, Snoopy's doghouse with music and lights, and a cardboard backdrop. Ready for a review that will help you get over the post-holiday blahs? Then join me after the break.... 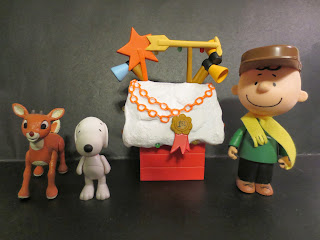 The set includes Snoopy, his decorated doghouse, and a cardboard backdrop.  Snoop himself stands about three inches tall and seems to have successfully made the transition from a two dimensional comic and animated character to a three dimensional toy. With his size, I imagine he'd fit in great with a number of other toy lines if you don't have any other Peanuts toys for him to hang out with. He'd go particularly well with the Hanna- Barbera figures, Mezco Family Guy figures, or the Rudolph toys from a few years back. Of course, he could really hang out with anyone, because that's just how Snoopy rolls. 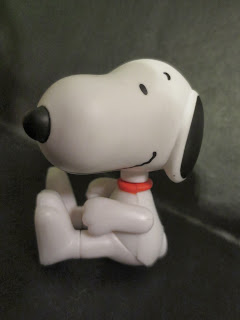 Snoopy features swivel ankles, a swivel torso, swivel shoulders, and a swivel neck. He's really a pretty sturdy toy, even though he might not seem like it at first due to the loose ankle joints. My guess is that Forever Fun assumes most people will just use this as a decoration and while they're probably correct, he does have some interesting articulation. The swivel torso joint is interesting because it's cut diagonally so that when you swivel it, it makes Snoopy sit down. It's pretty impressive. I feel like I've seen a joint like this somewhere else, but I can't remember where. I wish the shoulders and head joints were a bit more expressive, but they're still pretty average. 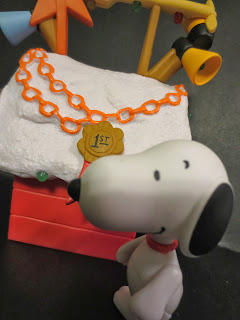 Snoopy is pretty nicely rendered in three dimensions here. He's got the over sized head that most Peanuts characters seem to have and the small, fairly simple body. There's not a lot of detail work on the body; a simple tail and a sculpted ridge for Snoopy's collar are pretty much all the detail you get. The head is made from a soft rotocast plastic and has the right shape so that it's instantly recognizable from nearly any angle. The facial features aren't sculpted but are simply painted on. 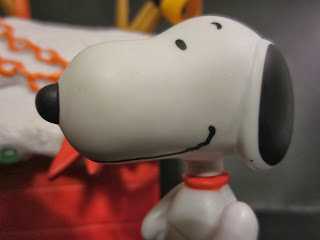 The paint work is also pretty average, although Snoopy's a pretty basic character design wise so it works. I do like the way the eyes, eye brows, and mouth are painted on. They have a squiggly look to them that echoes Charles Schulz's artwork and give Snoopy a sly grin. One thing that's a bit disappointing is that due to the rotocast head being kind of rubbery, it seems to pick up dirt and scuffs fairly easy; don't be surprised that Snoopy's head is not as white as his body. Other than the trademark spot on his back and the red on his collar, Snoopy's body is just molded in white plastic. 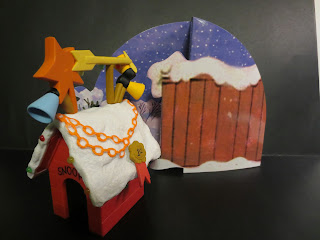 If all we had to work with here was the Snoopy figure, this would be a pretty average offering. The accessories, however, send this thing through the roof. Most notably being Snoopy's doghouse all decked out for Christmas and proudly displaying the first place ribbon that Snoopy received for his decorating efforts. The house is about 4 inches tall (with an additional two inches of decorations on top) and is molded in bright red plastic. 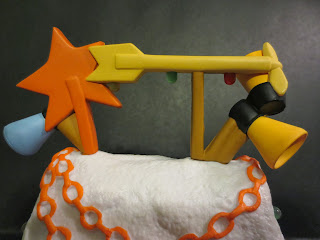 It has a snow covered roof that features decorative strands of garland, a star, spotlights, a weather vane, and a multitude of Christmas lights that actually blink along with the music. Yes, music. Push down on the ribbon and the doghouse blares the familiar Vince Guaraldi Trio Peanuts theme "Linus and Lucy." Yes, that's the name of the jazzy number that you think of any time you see or hear anything Peanuts related. It's a great feature and is definitely a piece of music that won't get old no matter how many times you play it! 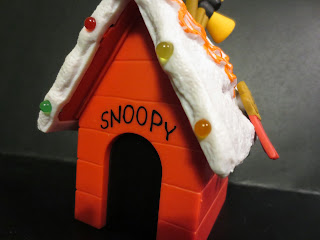 The set also comes with a cardboard backdrop. It's nothing too fancy but matches the backdrop style of A Charlie Brown Christmas and has a nice 3-D effect to it due to the way the backdrop unfolds. The fence actually it positioned a few inches from the main backdrop and makes for a nice way to display the dog house. 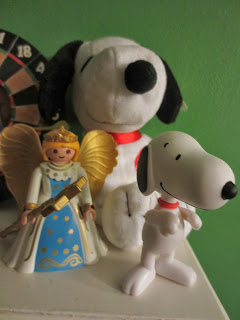 I really like this set. Snoopy is a pretty average action figure on his own but when you pair him with his doghouse that lights up and plays that familiar music, you're really getting something special. This is a neat decoration as well as a fun toy. I have a small shelf of Christmas themed toys in my display room that make their way out to the living room every year as part of the Christmas decor, and it's great to have another addition to that collection. I'm giving this set a Great. Can anyone really resist Snoopy or that jazzy music? If Santa brought you cold hard cash (preferably 10s and 20s) then this should definitely be what you spend it on.

If you didn't get one of these for Christmas, you might want to try and pickup one from Big Bad Toy Store. I don't think this will be an item you'll stumble across easily since it's seasonal, so you may want to jump on it sooner rather than later!