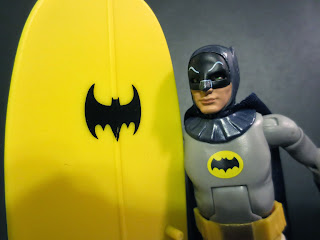 While I do adore the 1966 Batman TV series, some of you might remember that I wasn't a fan of Mattel's Adam West styled Batman from the Batman: Classic TV Series line. While the headsculpt resembled Mr. Adam West in the cowl quite well, the body seemed too gangly and oddly proportioned. I honestly had planned to be done with the line (barring a future Yvonne Craig as Batgirl figure release, of course) but finding most of the basic figures on sale for about $5 changed my tune a bit. While these weren't $16 to $18 dollar figures to me, $5 seemed just about right. Today I'm looking at one of the wackiest figures from the line, Surf's Up Batman. Based on the third season episode "Surf's Up! Joker's Under!", this figure shows Batman as he engages the Joker in a surfing contest in his cool swimming trunks and full Batman costume. Ready for a figure that's weird, wild, wet, and wacky? Will I like this figure better than the previous Batman figure? Only time will tell, the time that it takes you to jump past the break of course.... 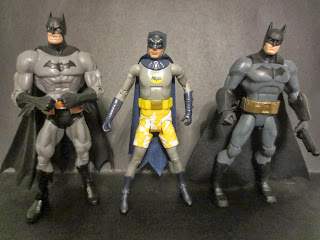 The 1966 TV series had a colorful, almost animated vibe to it that Mattel has captured fairly well here. I actually think this figure captures the vibe of the show even more as it has a bit more color and exaggeration in it's design. Batman stands between 6 1/8 and 6 1/4 inches tall which makes him a bit larger than the Movie Masters figures but a bit shorter than the DC Universe Classics figures. Other than his swimming trunks (crotch piece and upper thighs), this is the same figure as the first release. And you know what? I actually like it more. A lot more, in fact. 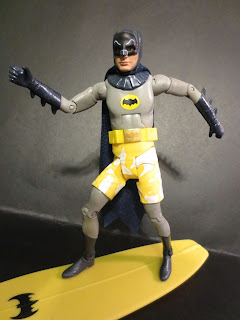 The articulation is pretty similar to most Movie Masters or DCUC figures: hinged ankles, hinged knees, swivel thighs, H-hinged hips, a swivel waist, an abdomen- hinge, swivel/hinge shoulders, bicep swivels, hinged elbows, swivel wrists, and a ball jointed head. Most of the articulation is pretty functional and really helps to aid Batman in assuming both fighting poses and surfing poses. I still think the ab-hinge is too limited in it's movement and mars the sculpt.  I'm also really perplexed by the ball jointed head which barely moves. It feels like more of a loose swivel joint than a functioning ball joint as it only moves up and down when in certain positions. The rest of the joints are nice and tight, though, and the quality control feels pretty solid. 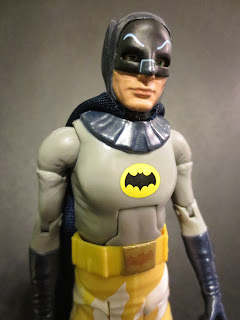 So, the sculpt is pretty much same as the previous Batman figure, huh? Yup. Only the trunks are new, but I honestly believe that the baggy over-sized beach shorts really improve the rest of the sculpt. I loved the head sculpt last time and I think it looks great again here, but the body just didn't seem to be coherent. I think the trunks fix that. With the over-sized trunks on, the rest of the body strangely seems more in proportion. The thicker thighs give the impression of baggy shorts and your attention is immediately drawn to them. Yes, the limbs of the figure are still probably a bit too skinny, but it's just not as noticeable here. It's the only thing I can think of that explains why I like this figure's sculpt better than the previous one. 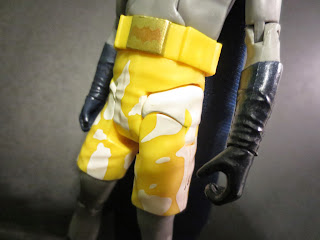 I do think the paint's much cleaner than the previous release, too. Except for some funky scuffs on the sides of his shorts, he looks great. They're really bright and wild The head is fantastic with good separation between the cowl and the face, and of course I love the painted on eyebrows and nose definition. The Bat-symbol on his chest is also much neater and cleaner than on my basic Batman figure, definitely a plus. To give the suit a unique look, perhaps replicating the shiny material the gloves and boots were made of, Mattel has mixed in a glittery material with the dark blue plastic. It's a nice, subtle effect that I really like. 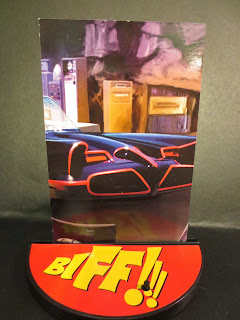 Impressively, this figure comes with a few accessories! First are the two pieces that are standard to most every figure in this line: A stand and an over-sized trading card. I love when stands are included and this is a pretty nice one. It's a semicircle with a large red and yellow decal on it that says "BIFF!!!", a wonderful throwback to the comical exclamations that popped up during the show's fight scenes. The card is fairly heavy and is double sided. On the front is a nicely painted scene of Batman and the Joker during their surfing contest while the back features part of a scene from the Batcave showing off part of the Batmobile and some computer banks. When I get all of these reviews done, I'll take a picture with all of the Batcave images  together. The stand actually has a slot which allows the card to stand vertically in the base, behind the figure. 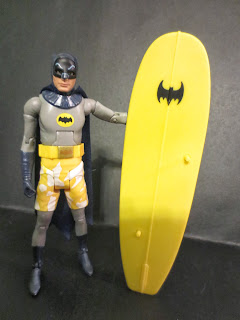 The best accessory, though, is the surfboard. It's a very nicely designed yellow surfboard with thye black Batsymbol on it. There are two footpegs to help pose Batman in any position you want, as well as a fin or rudder hanging down from the bottom. The board still stands fine on a flat surface, even with the rudder facing down, but it is removable if you need it to be for some reason. I love these episode specific accessories and wish more figures had come with them. I think it would have definitely helped the line. 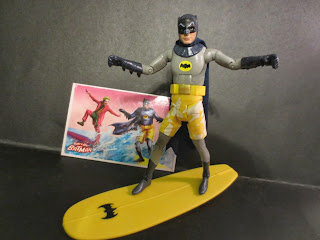 While Surf's Up Batman is not the definitive version of Adam West's Batman, it is perhaps the definitive figure to represent that particular era of Batman. It's recognizable as Batman, but it's also silly and over the top. While I have technical reasons for liking this figure more (the trunks really improve the rest of the sculpt in my eyes and the surfboard accessory is excellent), I also appreciate that this is an extremely comical figure. Looking at it, you immediately know this is a toy you're not supposed to take seriously (yes, I realize how ludicrous that statement must sound) but one that you can smile and laugh at. While I initially wrote this line off, I think there's real potential here. It's unfortunate, then, that Mattel really seems to have gone back and forth on whether we've seen the last of the 1966 Batman line or not. We've seen a sculpted "Surf's Up Joker" and we know that the likeness rights for Ms. Yvonne Craig as Batgirl have been worked out with Warner Brothers, so it would seem that Mattel could still work this line a bit more, but back and forth statements from Mattel like the two seen in this article from Action Figure Insider definitely leave me baffled. I've looked on Mattycollector.com, but no questions regarding DC properties seem to have been answered since August so I have no clue if this line is over or not. Still, we've got this Batman figure who is easily Great. He's definitely the figure I most recommend you picking up from this line if you decide on only one. He's basically the Highlander of 1966 Batman toys. That is, until Batgirl comes out. I'm still holding out hope!

Need a Surf's Up Batman? You can still pick one up from Big Bad Toy Store today!