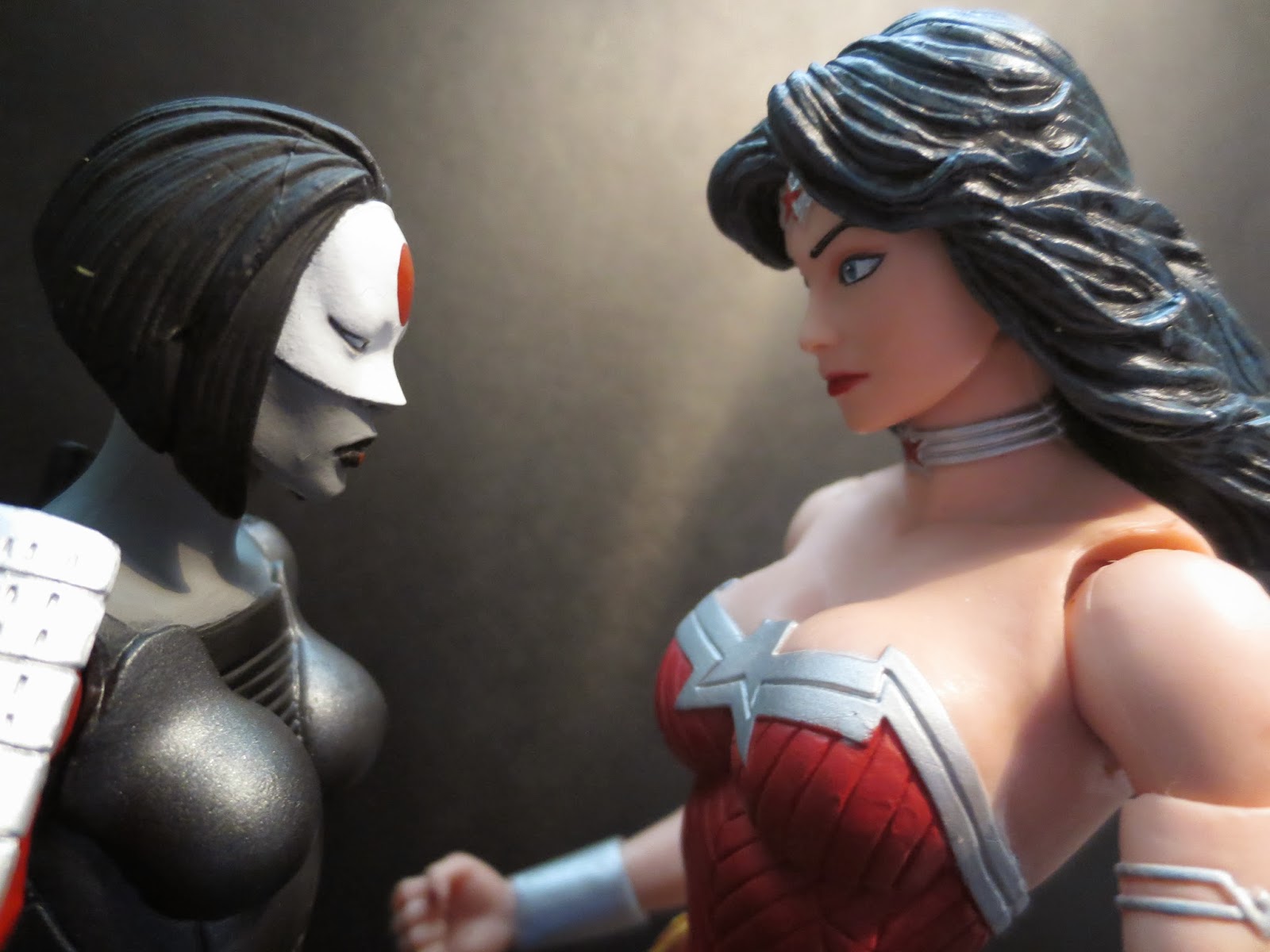 So, my rule about really only picking up Batman related heroes and villains for can sometimes be difficult because Batman interacts with pretty much everyone in the DC Universe at one point or another. I've kind of had to work on my policy here and there and apply the virtue of discernment or else I'd still be buying every DC figure that gets released. Generally, if someone is a prominent character in a Bat-family book or appears multiple times in one of Batman's own titles (not Justice League or something) I'll give them a pass. Katana definitely has some major Batman credentials, though. Not only was she a member of the Outsiders back in the old days but she also is a member of the Birds of Prey in the New 52 and is a significant character in Beware the Batman. She's packaged with Wonder Woman which is fine with me because 1. She's Wonder Woman; 2. She's really nice looking and 3. She's a good action figure. Ready for a look at this two-pack of Katana and Wonder Woman? Then join me after the break.... 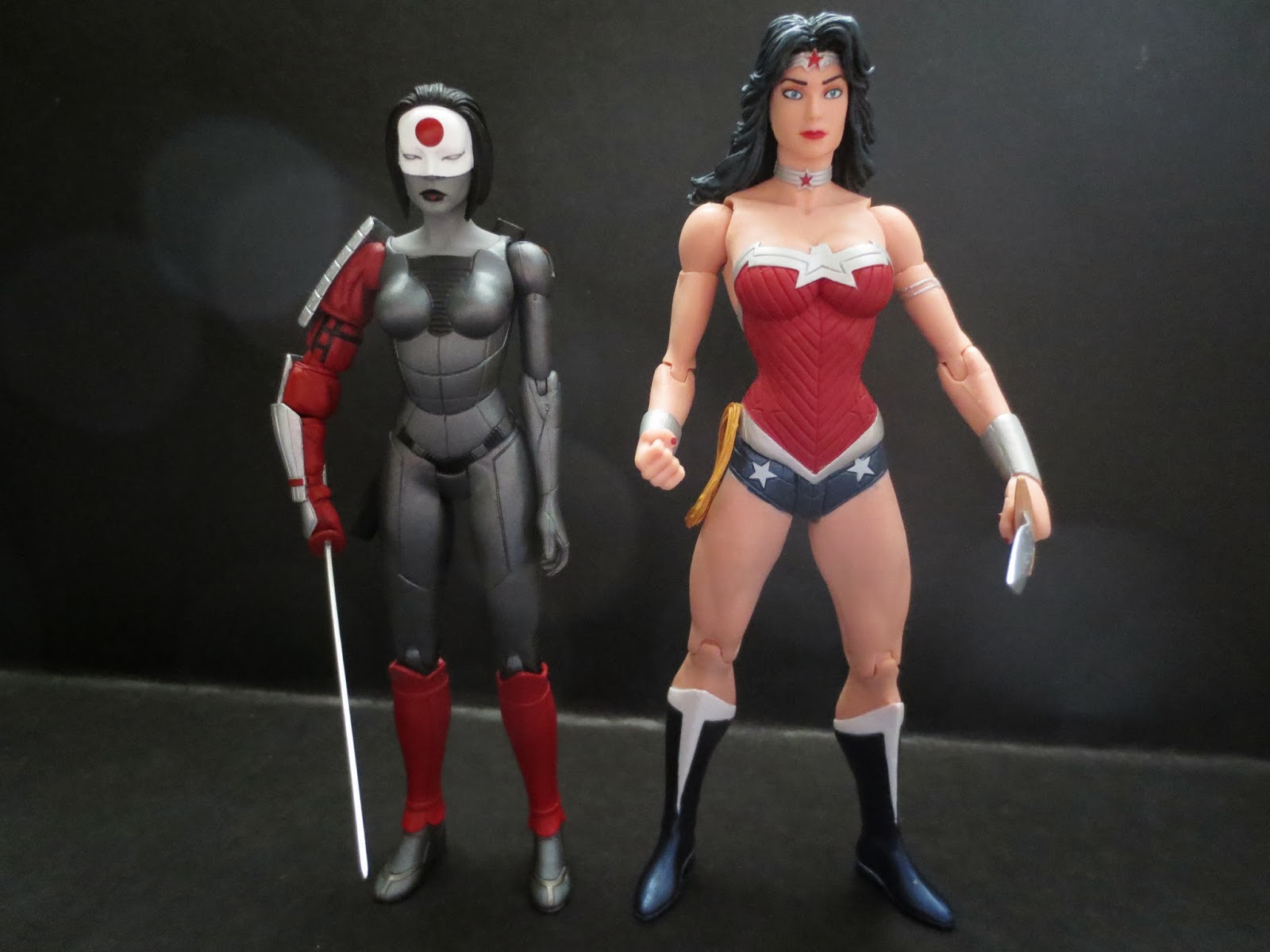 Katana measures in at 6 3/8th inches tall while Wonder Woman comes in somewhere between 6 3/4 and 7 inches tall. Other than the Arkham videogame based figures, DC Collectibles has been keeping a pretty nice, unified style to their New 52 figures, which I really like. These figures very nicely match their comic book counterparts. They don't really feel artistic specific which honestly isn't a bad thing, especially if you're posing multiple figures together. One thing that does bother me about this set is that when it was released in late spring of 2013, the included Wonder Woman figure had already been released twice before (once by herself and once in the Justice League "We Can Be Heroes Set". If you wanted Katana and already had this Wonder Woman figure, you were going to be stuck with a duplicate. DC Collectibles did this again with the Arkham two packs that each included one of the Abramovici Twins and a figure many collectors already had purchased a few years prior. Why not pack the twins together, right? Fortunately, it doesn't look like DC Collectibles is going to be carrying on this practice based on product shown for next year, so hopefully they've learned that many fans just refused to buy figures this way. 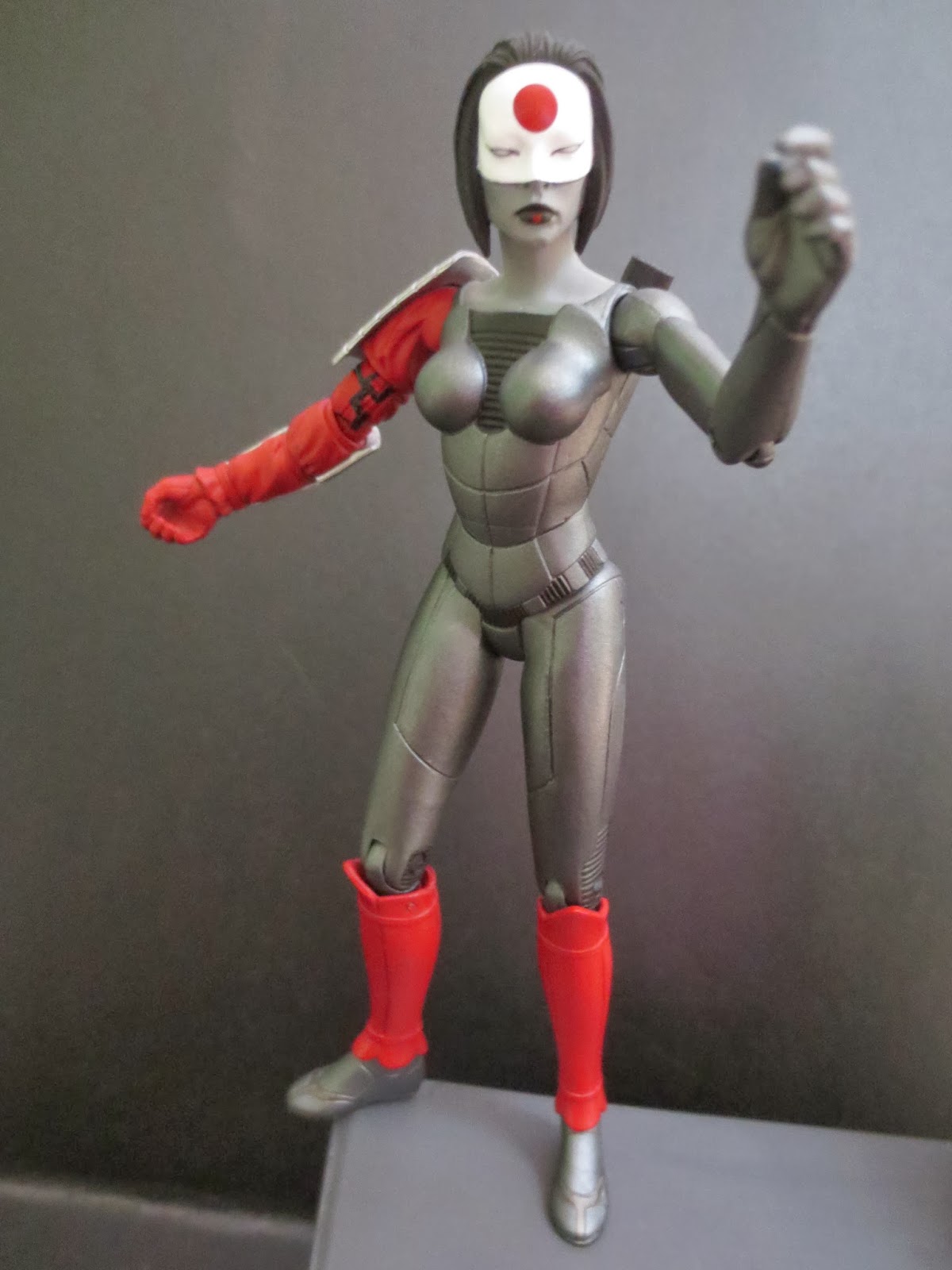 If you've ever owned figures from DC Collectibles or DC Direct, you'll be familiar with the articulation style. It's not completely barebones, but it's not DCUC either. Most figures are designed to look good in one single pose. Katana features: boot swivels, hinged knees, swivel hips, swivel/ hinge shoulders, bicep swivels, a swivel/ hinge right elbow, a hinged left elbow, a swivel right forearm, and a swivel neck. Her right boot swivel is a little loose, but it doesn't seem to prevent her from standing. Honestly, though, if a collector targeted figure doesn't have some sort of hip articulation besides just a swivel, is there any reason for leg articulation like knees? Katana's asymmetrical arm articulation is interesting as her armored right arm has a fair amount of joints. The elbow is really weird, though; with the armored panels on her arm I was unable to get hardly any hinge movement out of it. 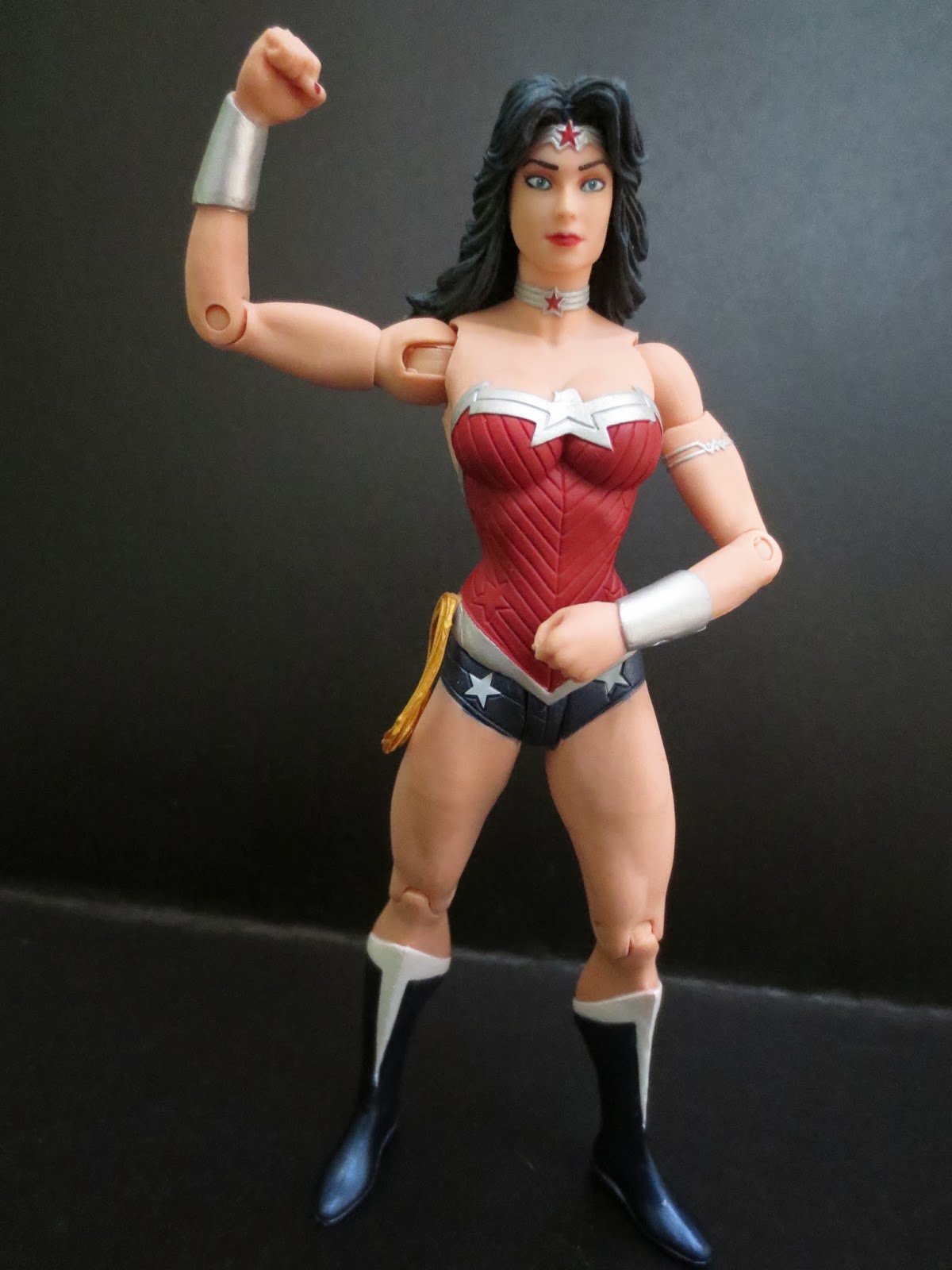 Wonder Woman features: hinged knees, swivel hips, swivel/hinge shoulders, swivel biceps, hinged elbows, and a ball jointed neck. Once again, she's pretty much designed to stand around and look good. Her head and shoulders have a nice range of movement, but I really can't believe that there are no cut joints on her wrists. Fortunately, all of the newer DC Collectibles figures I've purchased have really shown major improvement in the realm of articulation, as this figure is a few years old now. 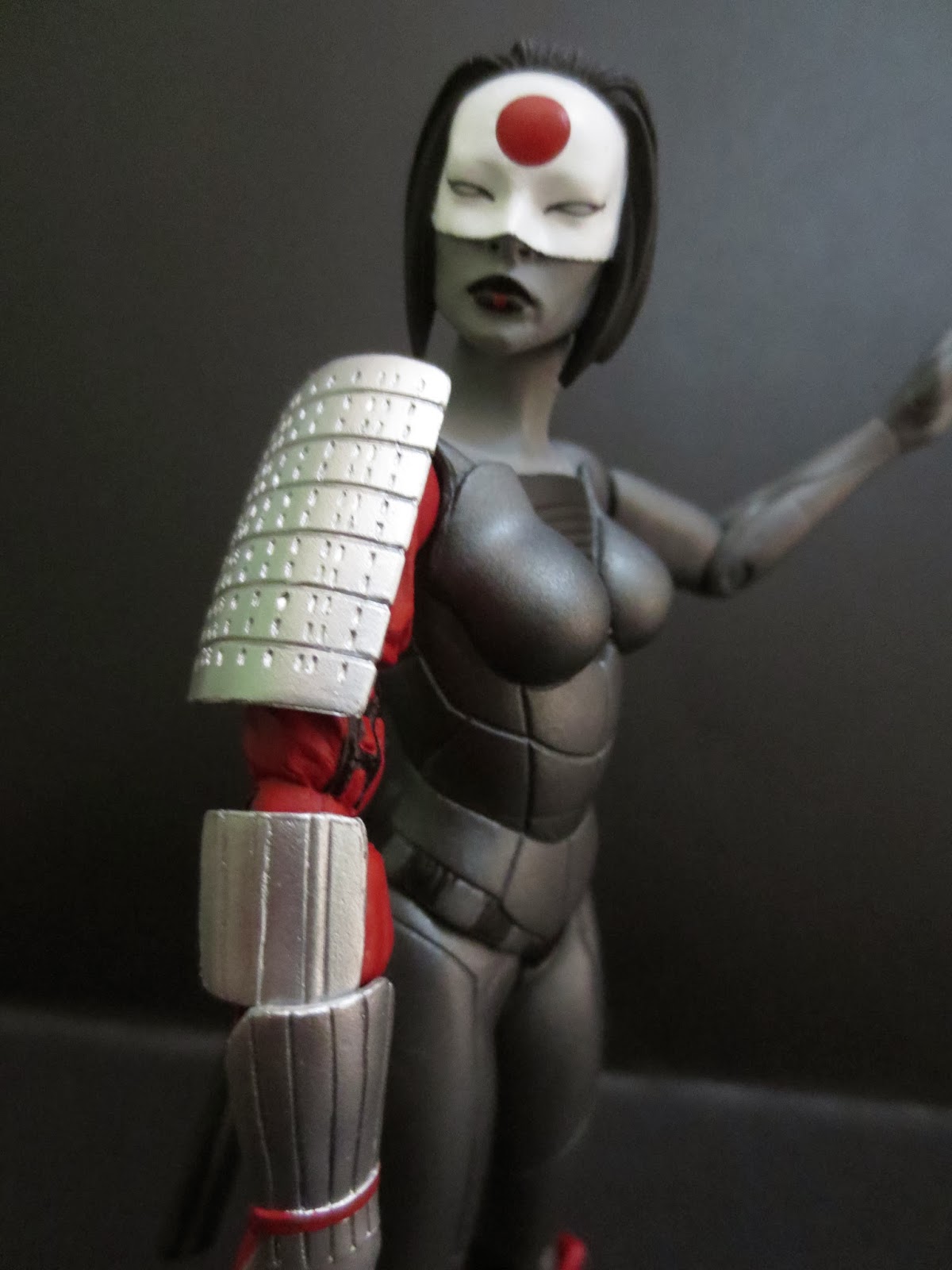 I like the design of Katana, although she definitely reminds me of Kabuki. She has a very slim, trim build and is dressed in a fairly interesting outfit. The body suit surely must be made of a more flexible material, but it looks armored with lots of lines and armored panels on it. While the functionality of her arm guards isn't perfect, the look of them is pretty impressive. Katana's right arm is very heavily padded and has some nicely detailed armored plates on her shoulder, elbow, and wrist. The head sculpt really works and contributes to the dramatic appearance of Kabuki's garb. She has a very cool short hairstyle and a half mask that is visibly raised from her face. Turn her around and you'll also notice that besides a permanently attached scabbard, she also has a small pouch on the small of her back. Hey, you gotta have a place to stash your keys, right? 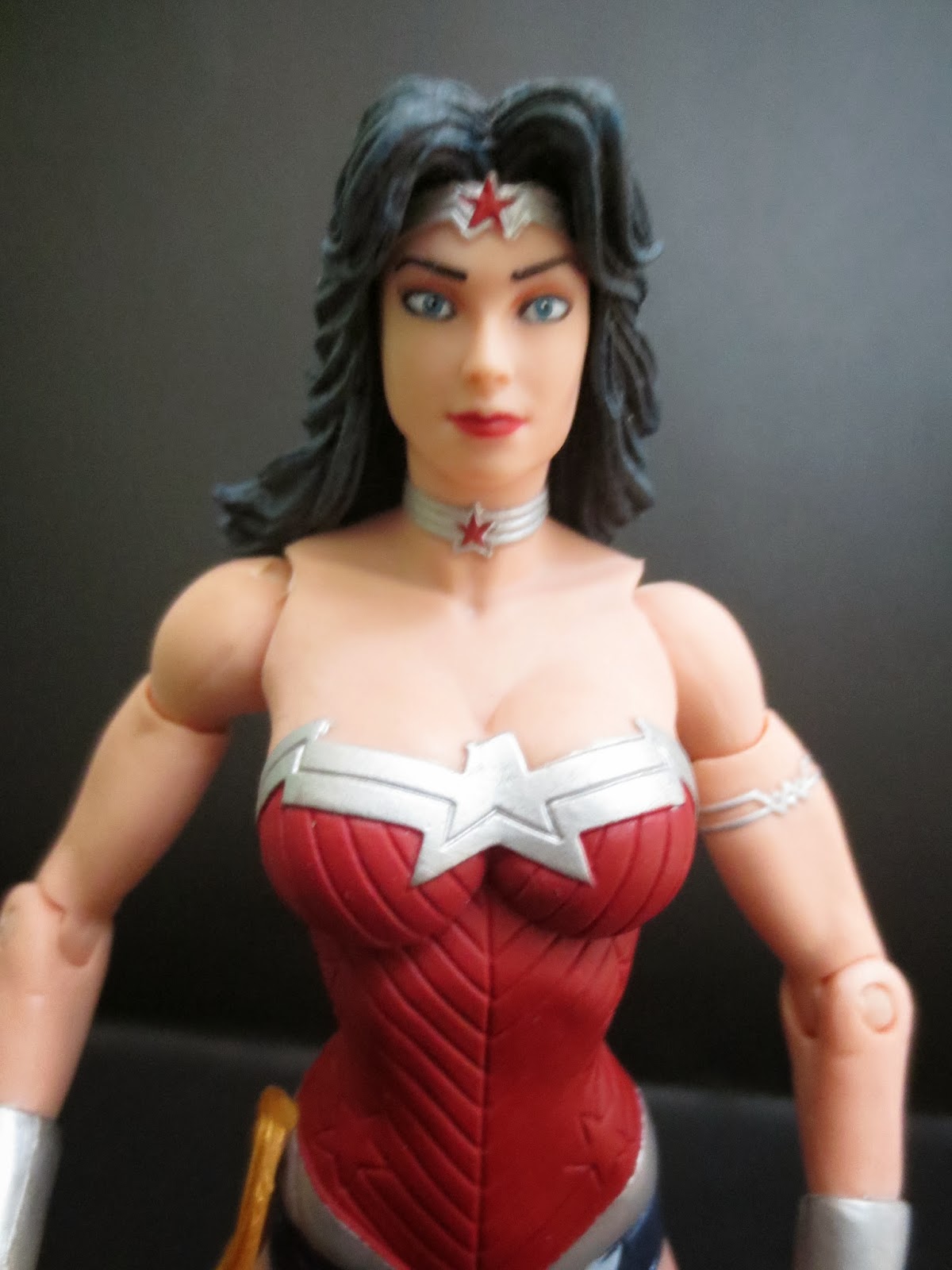 Wonder Woman is based off of her New 52 appearance, particularly as seen in the earlier Justice League books. I really like the costume- it's definitely recognizable as Wonder Woman but it's got some interesting detail that makes it seem a bit more mythological. Her breastplate is incredibly detailed with an armored appearance and elements of Wonder Woman's symbol are worked into it's top edge. The double "W" is also worked into the circlet on her left bicep and her tiara, along with a star on her choker. I really like her look, particularly as it really enhances the character's build. Princess Diana doesn't just look like your standard female figure: she actually looks really built and tones. DC Collectibles definitely nailed the demigod strength and build of the character. Her headsculpt is also quite gorgeous with a beautiful face and some great hair. Oh, and her lasso of truth is sculpted and permanently attached to her right hip. 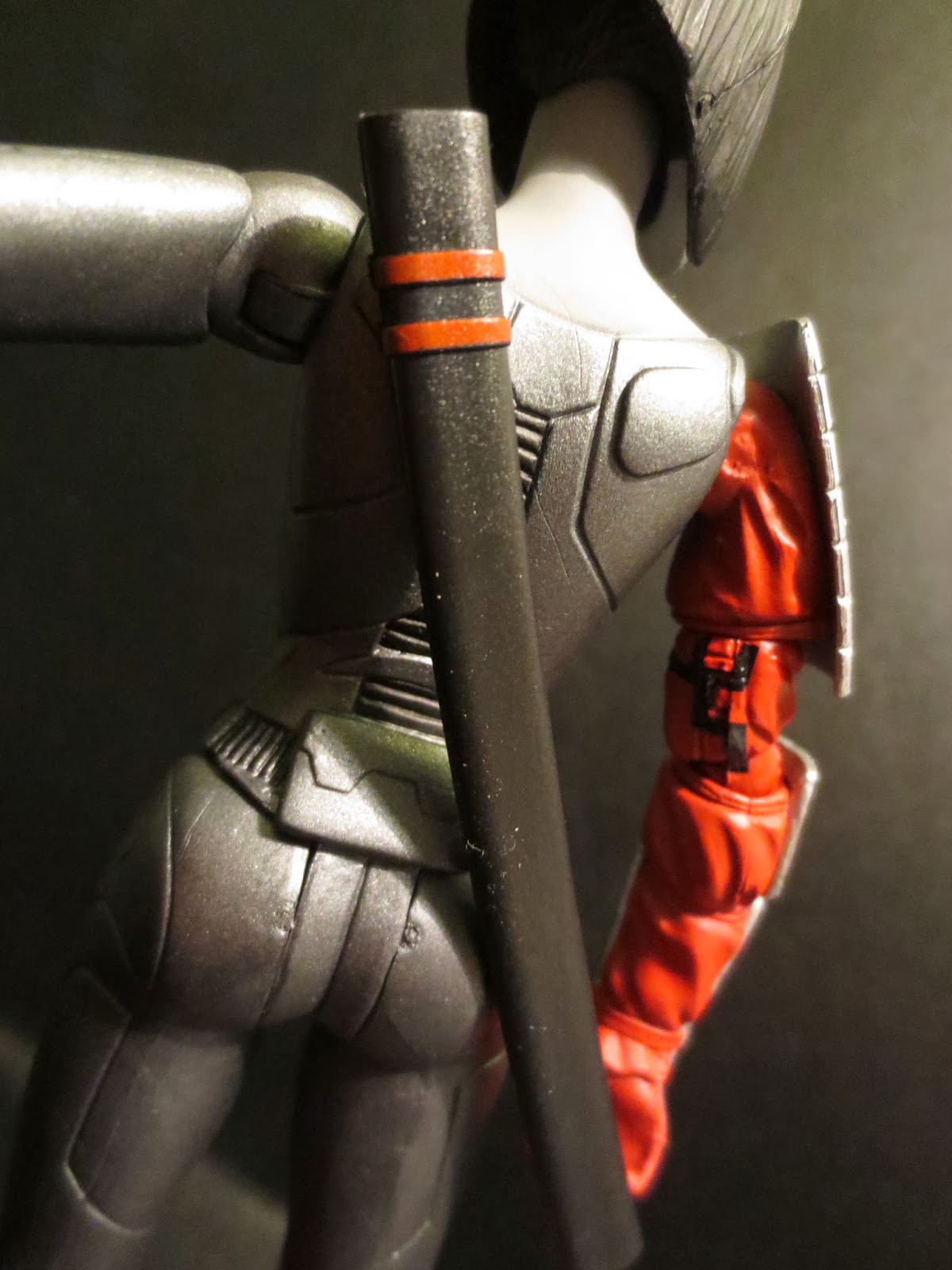 I like the color scheme of Katana's outfit. Her silver, gray, and red color scheme is interesting in that while it initially seems very dull, it actually is rather vivid. I believe that the light gray of Kabuki's lower face and chest is actually a makeup of some kind as she's been shown with her mask off and possessing a normal human flesh tone. I've also seen some people suggest that using her sword drains the pigment from her skin, but I couldn't find anything official.  Still, she's rather unique and the clean paintwork really compliments the excellent sculpt well. 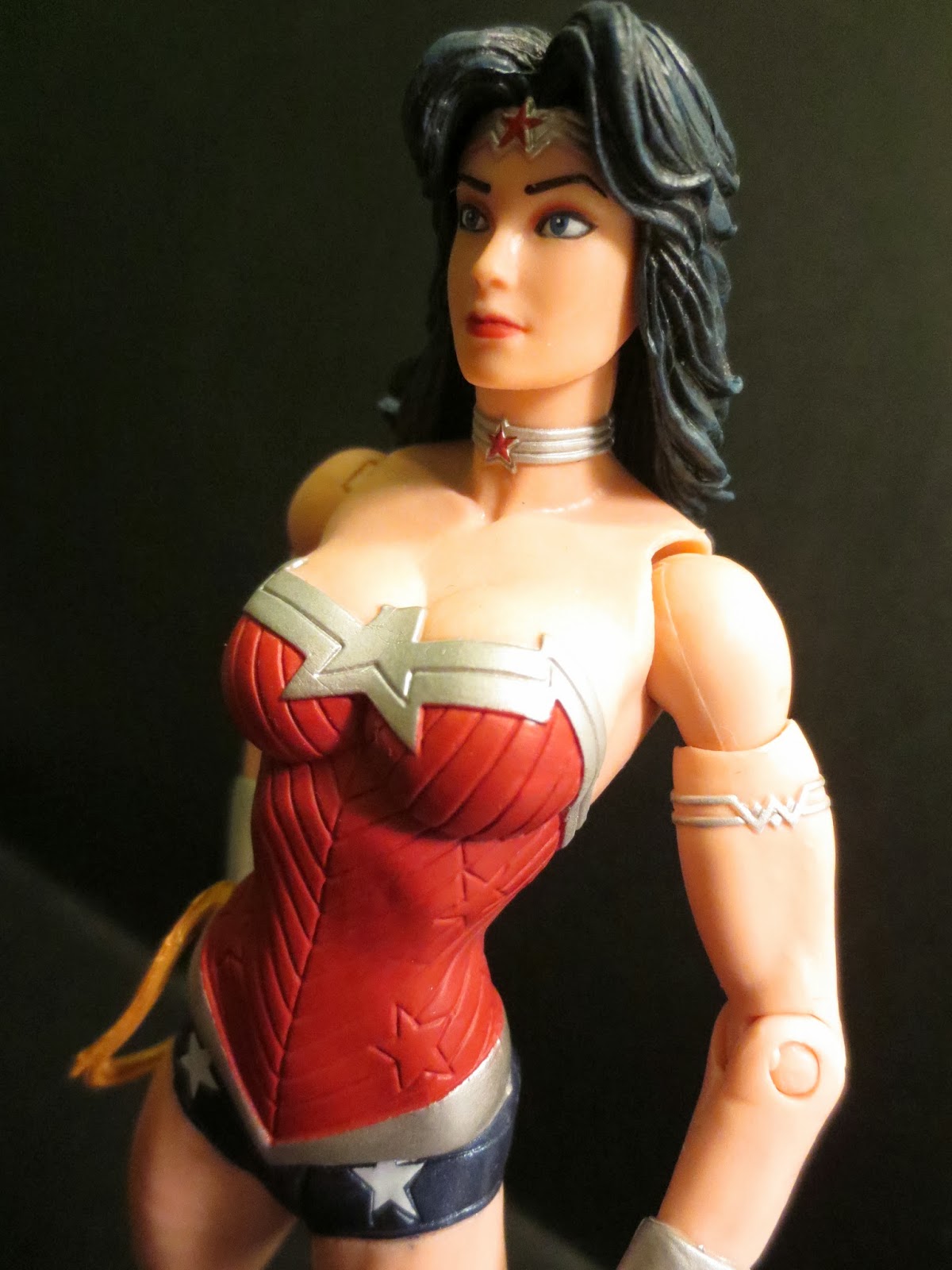 For the most part I'm quite happy with the paintwork. Wonder Woman is molded in a plastic that captures her flesh tone which almost always look better than painted skin. Parts of her costume like her boots and shorts have a nice sheen to them, reminiscent of a shiny material. Minor details like her choker, circlet, tiara, and bracers all look good with clean, neat paint applications. The only issue I noticed is that the line between her shorts and her thighs is a bit messy with some blue paint bleed from her shorts. Probably the most interesting pain decision was giving Diana's black hair a blue wash. While we don't see something like this often in statues and figures, it really does nicely bring out the texture of her hair sculpt and reflect what we tend to see in comics where blue often is used to bring out detail on black hair and objects. I like it as it's quite subtle and adds a lot to the figure. 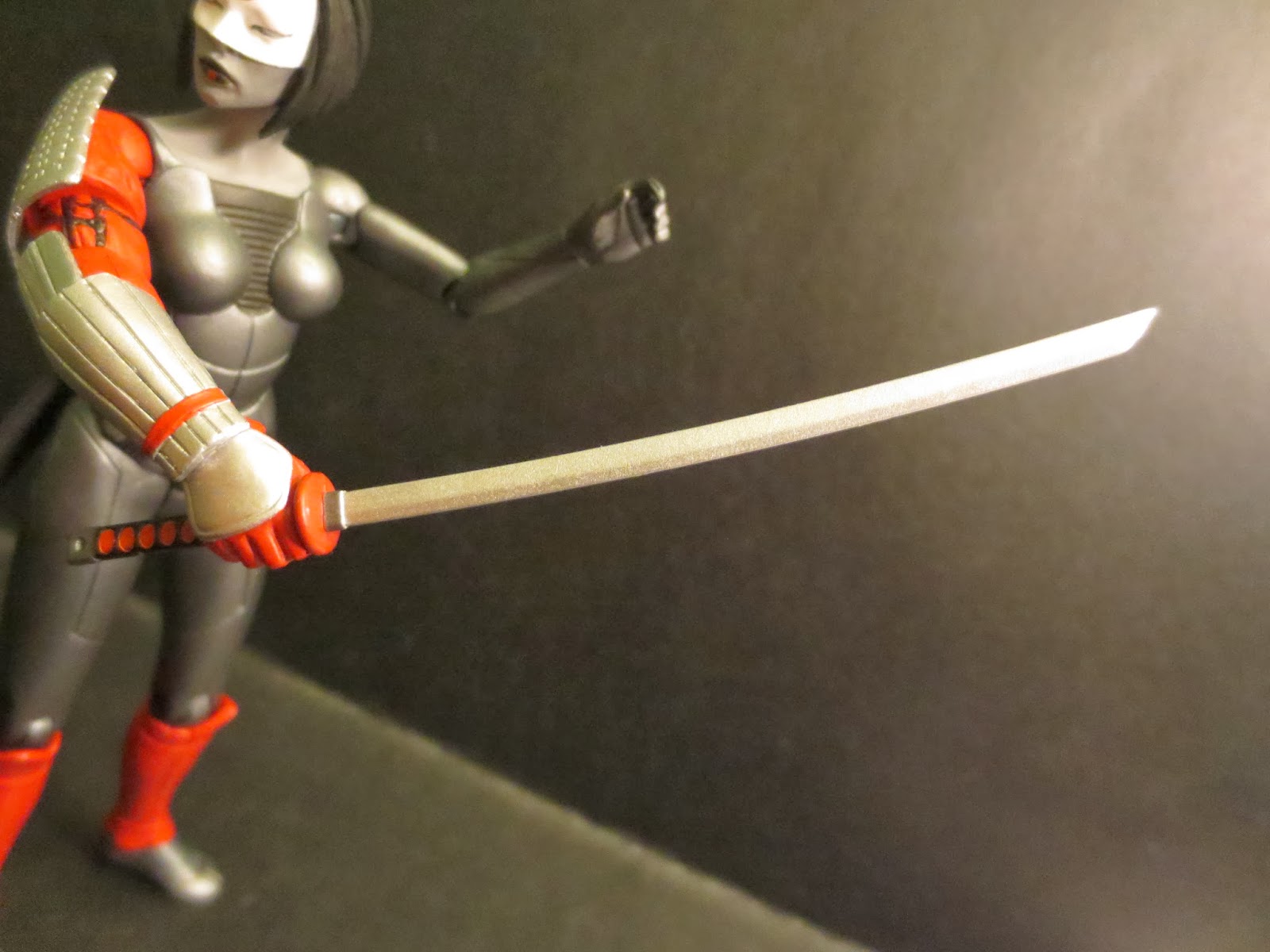 Katan's accessory, Soultaker, is incredibly important to her character, for without it she would still just be Tatsu Yamashiro. She took her name from the blade she carries and decided to fight crime after her husband was murdered by a Yakuza clan. Soultaker was forged by the legendary swordsmith Muramasa Sengo sometime during the Muromachi period. It's a nicely detailed accessory that Katana can wield in either hand or store in the sheathe on her back. The paintwork is really sharp with a detailed red and black pattern on the handle. 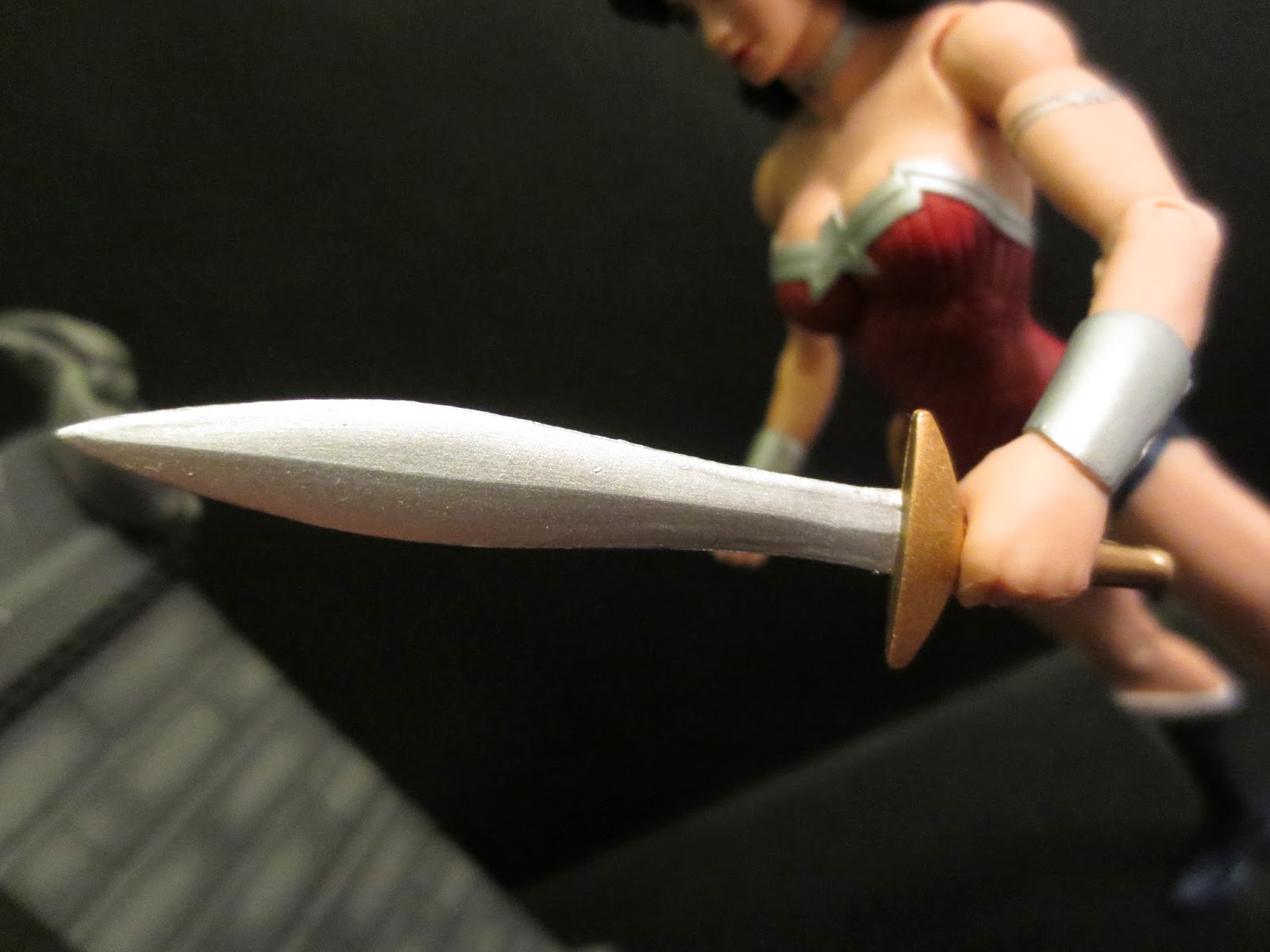 Since Wonder Woman's accessory is permanently affixed to her hip (why does everyone always do this with the lasso of truth?) she does come with something to fill her right hand: a sword. It looks just like the sword that appeared in the Cliff Chiang cover art of Wonder Woman issue #1 and the Volume One: Blood trade. The blade is silver and the handle is gold, but be careful! This thing is not metal but brittle plastic. It feels a bit delicate (not at all like Wonder Woman herself) so be careful when equipping her with it. Let's be honest, though: Wonder Woman could do more damage with a broken blade than nearly anyone else could with a lightsaber. She's that awesome. 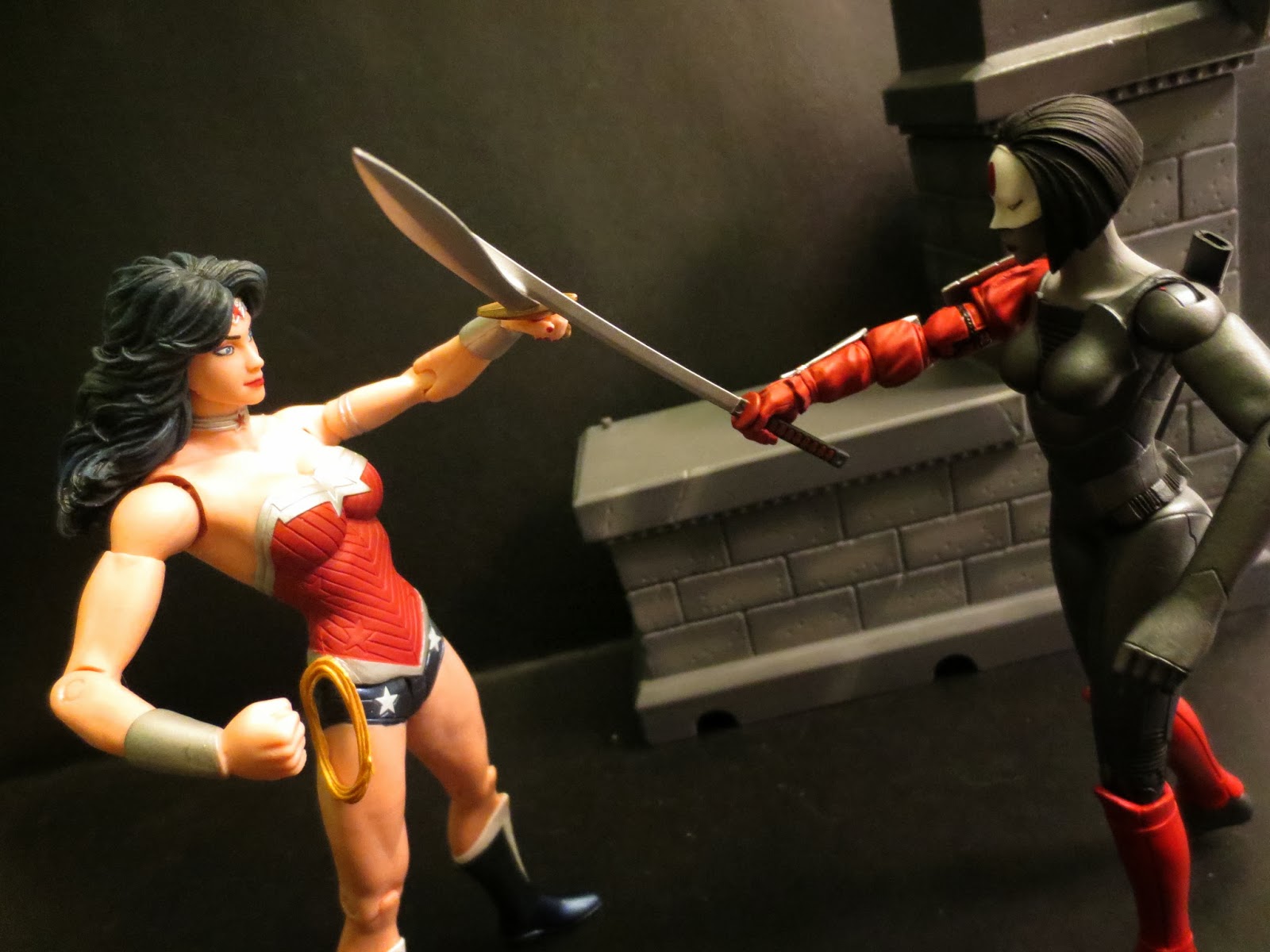 Overall, I really like this set. While I bought it for Katana, I find myself actually liking Wonder Woman just a bit more. While it still seems a bit manipulative of DC Collectibles to include new figures with previously released characters that many fans already own, I can't say that had any negative effect on me this time. If I were rating these individually, I'd give Katana a Good and a 1/2 (due to her great paint and sculpt but factoring in her weird articulation, particularly in her right arm) and Wonder Woman a Great (gorgeous sculpt and paint with only some minor issues), so averaging them, I'll give them overall a Great. Obviously, if you only want Katana, this score would probably go down and you might want to shop around a bit more to find a deal. Even when their figures aren't as well articulated as Mattel's (a trend which DC Collectibles seems to be turning around with some of their new figures) their sculpts and paint are fantastic. They rarely, if ever, reuse anything. NECA and DC Collectibles are two of the only companies that can tempt me into buying figures I have no interest in simply based on how great their sculpts and paintwork are. While I went through a DC Collectibles hate spell for a few months last year (because they had some really poor QC for awhile) things have seemed to get back on track and I'm once again a fan. 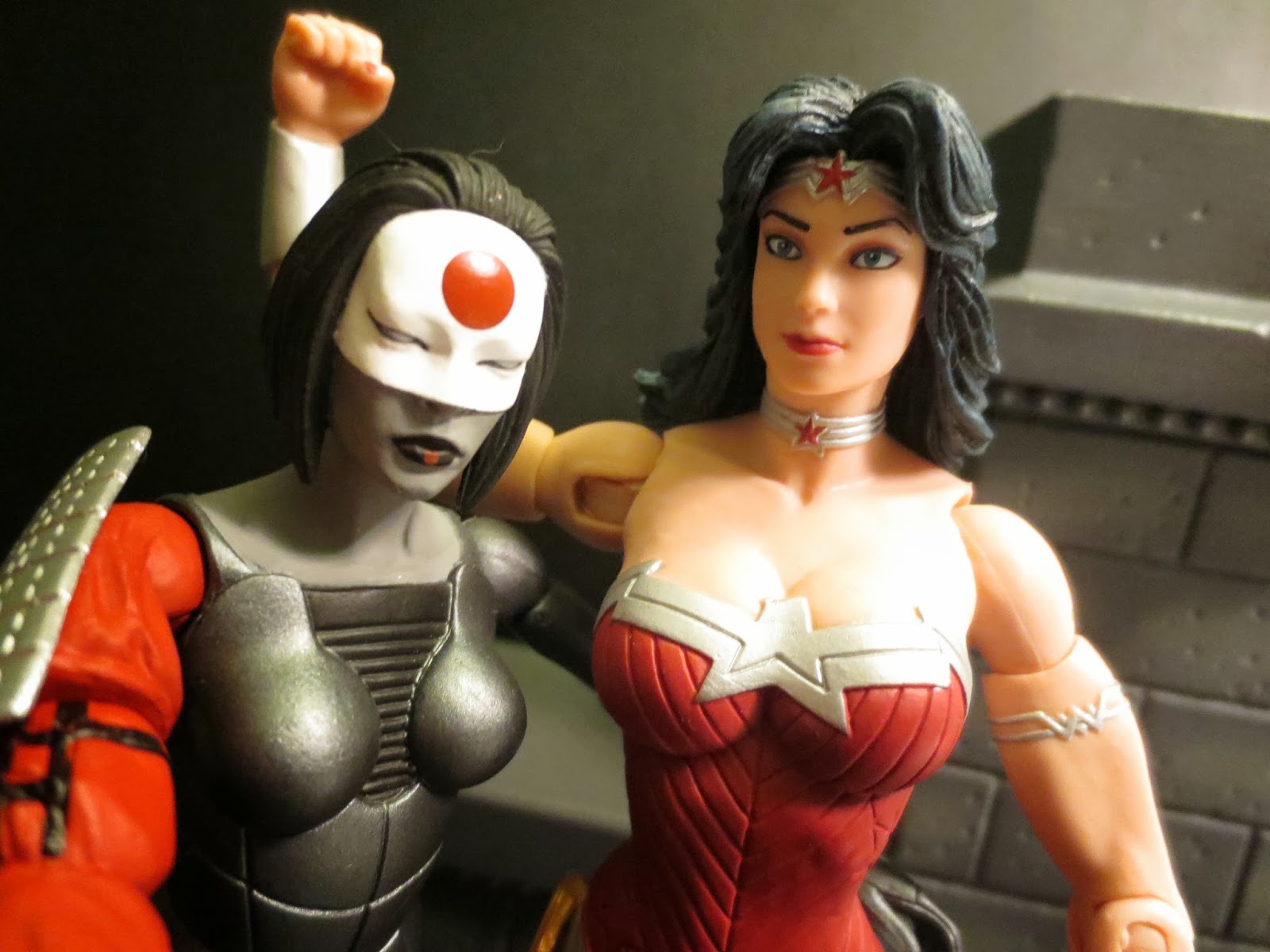 If you're wanting a set of these for yourself, you can order them from Big Bad Toy Store right now. I think most fans will be happy to add them both to their DC toy shelf/ room/ small storage building.