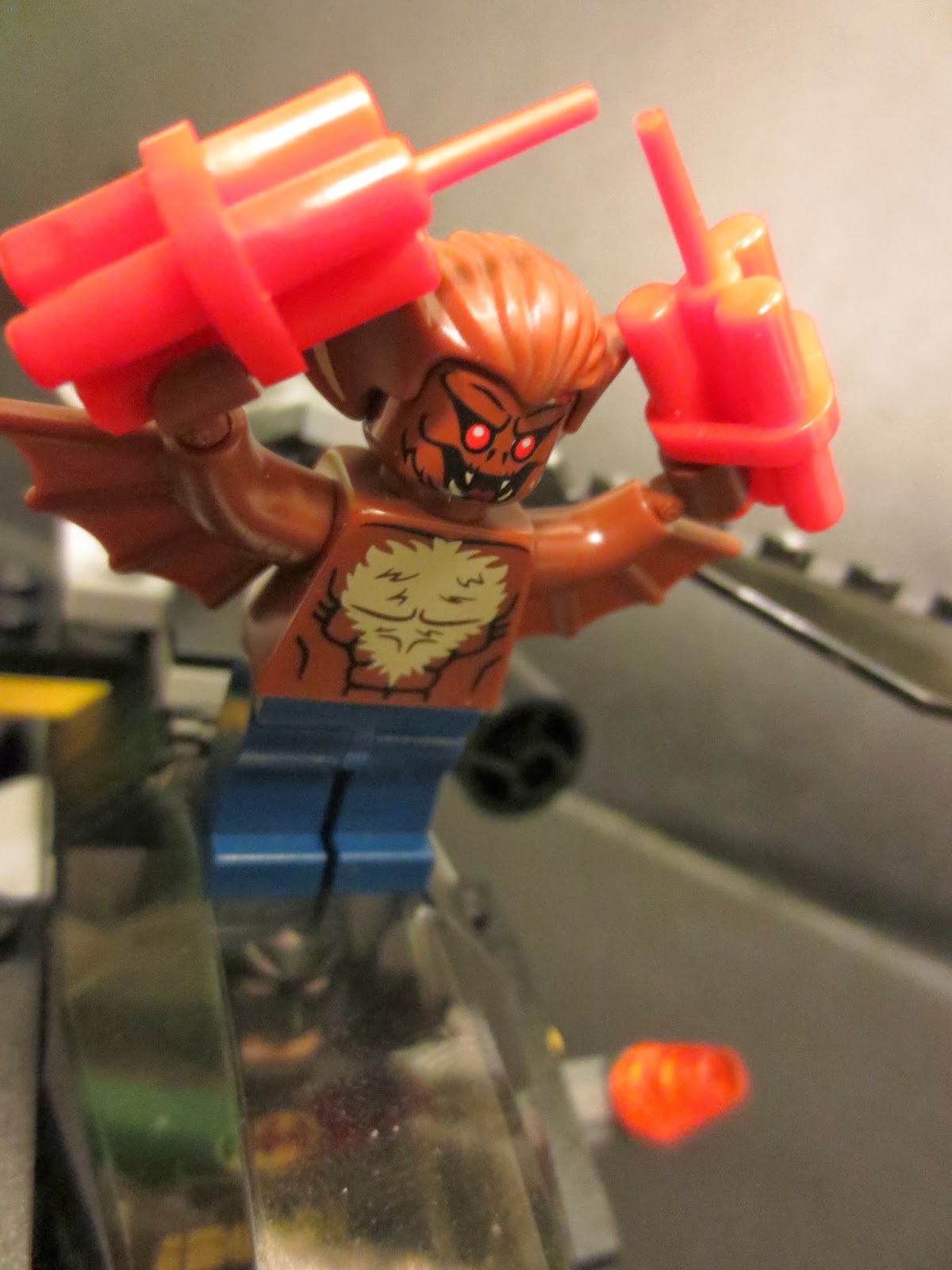 Back in 2012 when I first bought the Vampyre Castle Lego set from the Monster Fighters theme, the design of the "manbat" characters just seemed to guarantee that Lego would release a Man-Bat minifigure in their DC Superheroes line. It's finally happened, as Man-Bat is the anchor for one of the first of the 2014 DC Superheroes sets to be released: Man-Bat Attack. The set includes a New 52 styled Dick Grayson as Nightwing, a standard black and yellow Batman, a Batcopter, a glider for Nightwing, and Man-Bat. This is the first Man-Bat figure released in any of the Lego lines, so he's sure to be a pretty popular guy. Fortunately, the set isn't terribly expensive and is actually a pretty good set. Want to learn more? Then join me after the break... 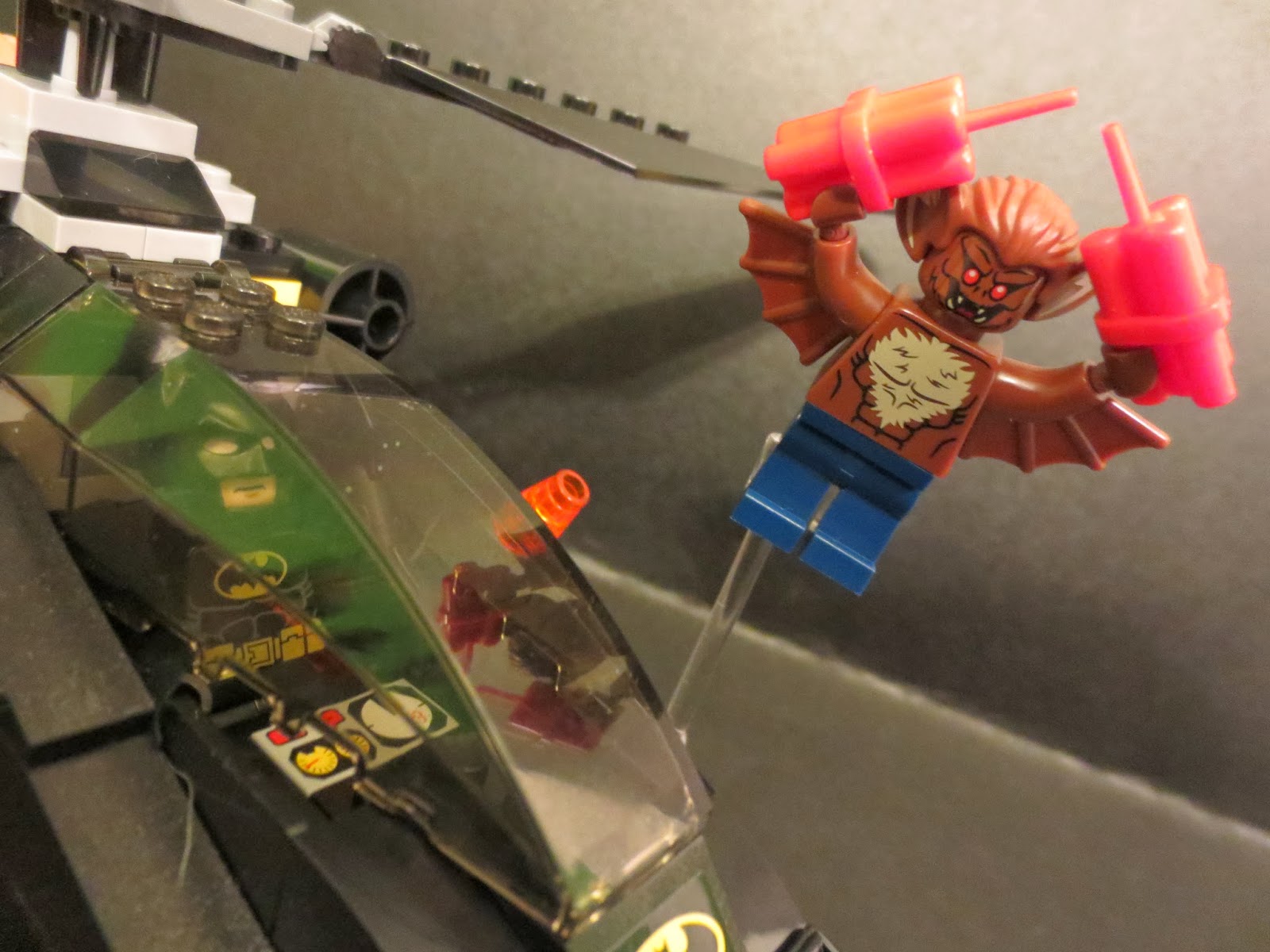 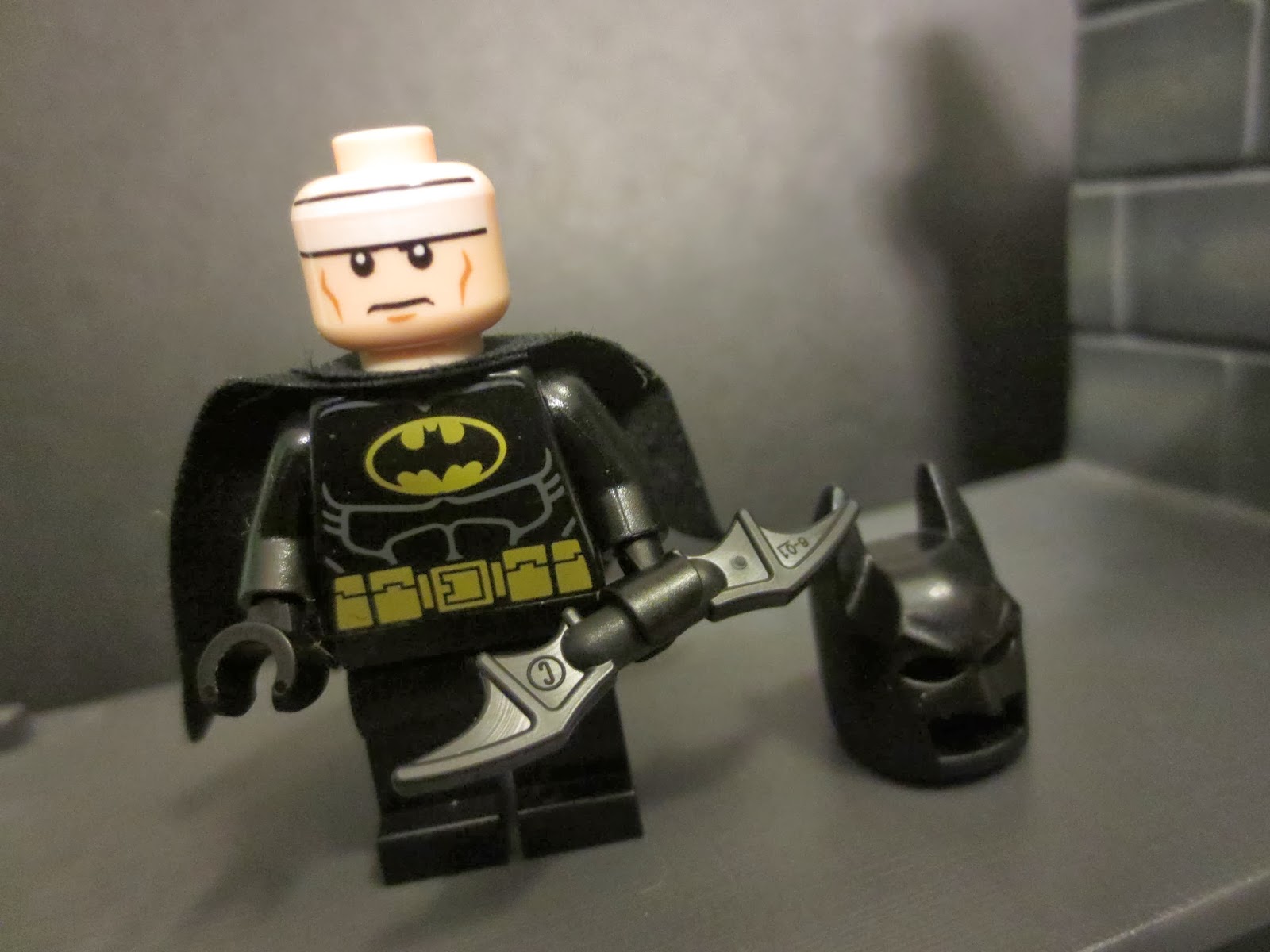 The Batman figure included in this set is the same figure that has come with a few different sets, including "The Batmobile and the Two-Face Chase," "Arkham Asylum Breakout," and "Batwing Battle Over Gotham City." It's a fairly standard black suited Batman with a yellow chest emblem and utility belt (it very much resembles the Michael Keaton outfit). He comes with two batarangs, a soft goods cape, and a removable cowl. I've always liked how Lego has tackled the cowl on Batman: when it's off you have a regular Bruce Wayne face with what appears to be a headband, but put the cowl on and the headband becomes the whites of Batman's eyes. His uniform features back printing and he has two facial expressions: a frown and a smirk. 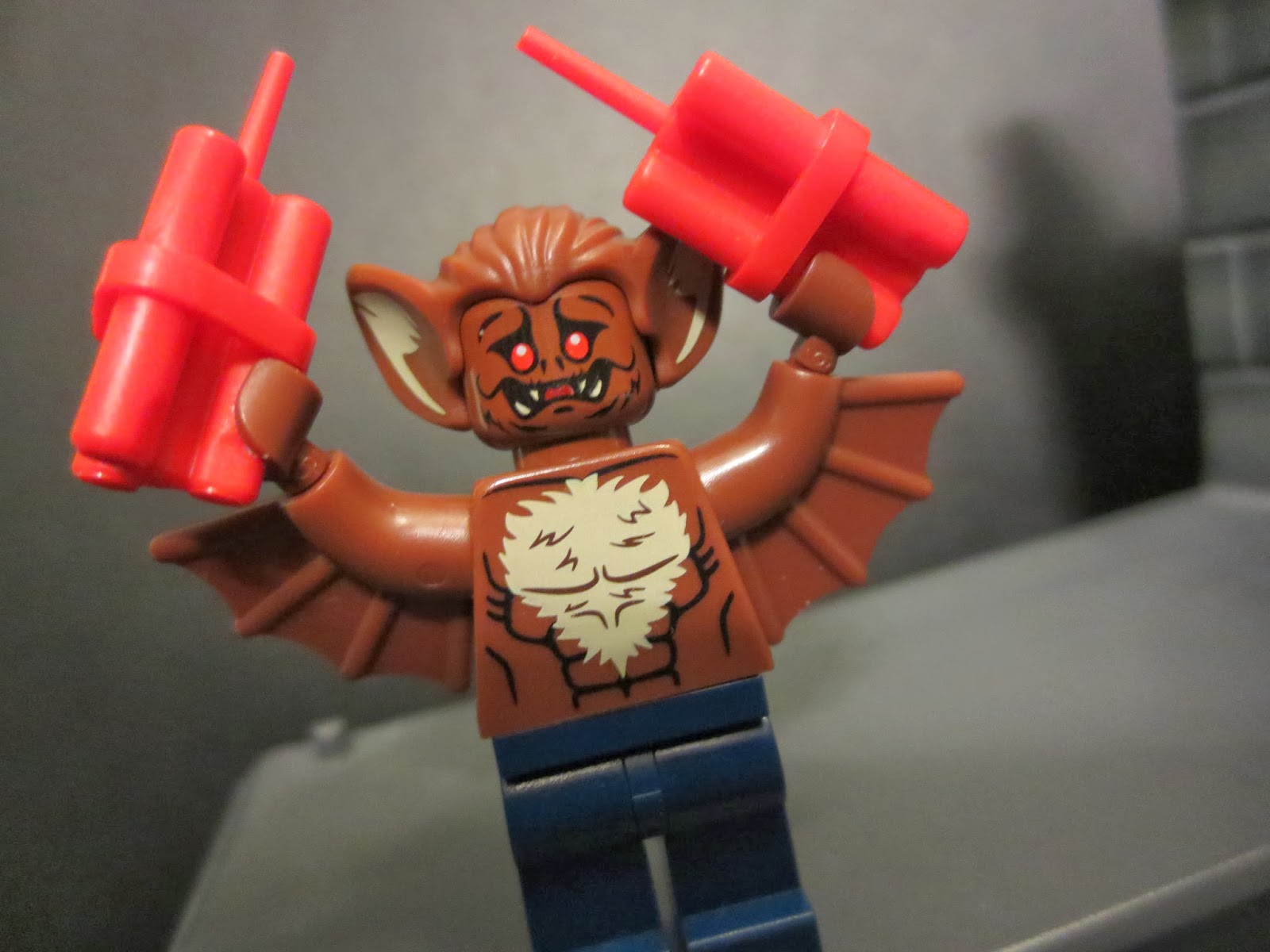 Man-Bat is probably the main appeal of this set and I'm pleased to say he's quite a nice minifigure. He has the bat-like arms that the Monster Fighters bats and the Minifgure blind bagged bats share as well as a nifty bat ears "hairpiece." His torso is uncovered (and features back printing) but fortunately he's wearing pants. Of course, if you give him some brown pants from another figure, you can have a "party time" Man-Bat.  His head features two expressions (an evil grin and a frightened expression) and he's armed with two bundles of dynamite. These are some really fun little accessories and they really add a lot to the look of the toy. 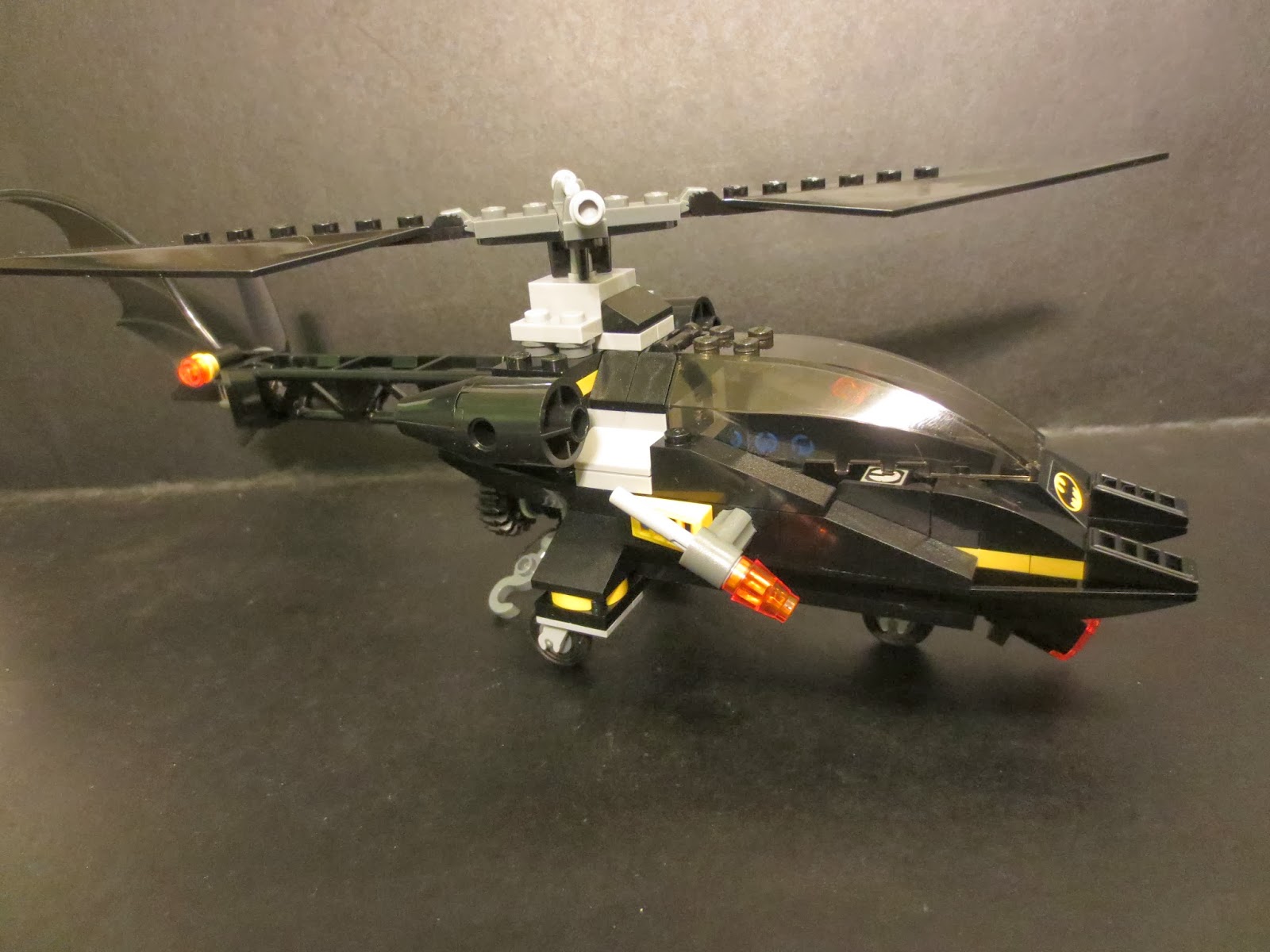 Overall, the Batcopter is a pretty neat medium sized vehicle. I like the black and yellow color scheme with the gray elements and orangish lights. I was concerned that it would be a bit flimsy but it's actually pretty solid. If you look closely you can see that it does have wheels that it rests on and not skids like I expected. 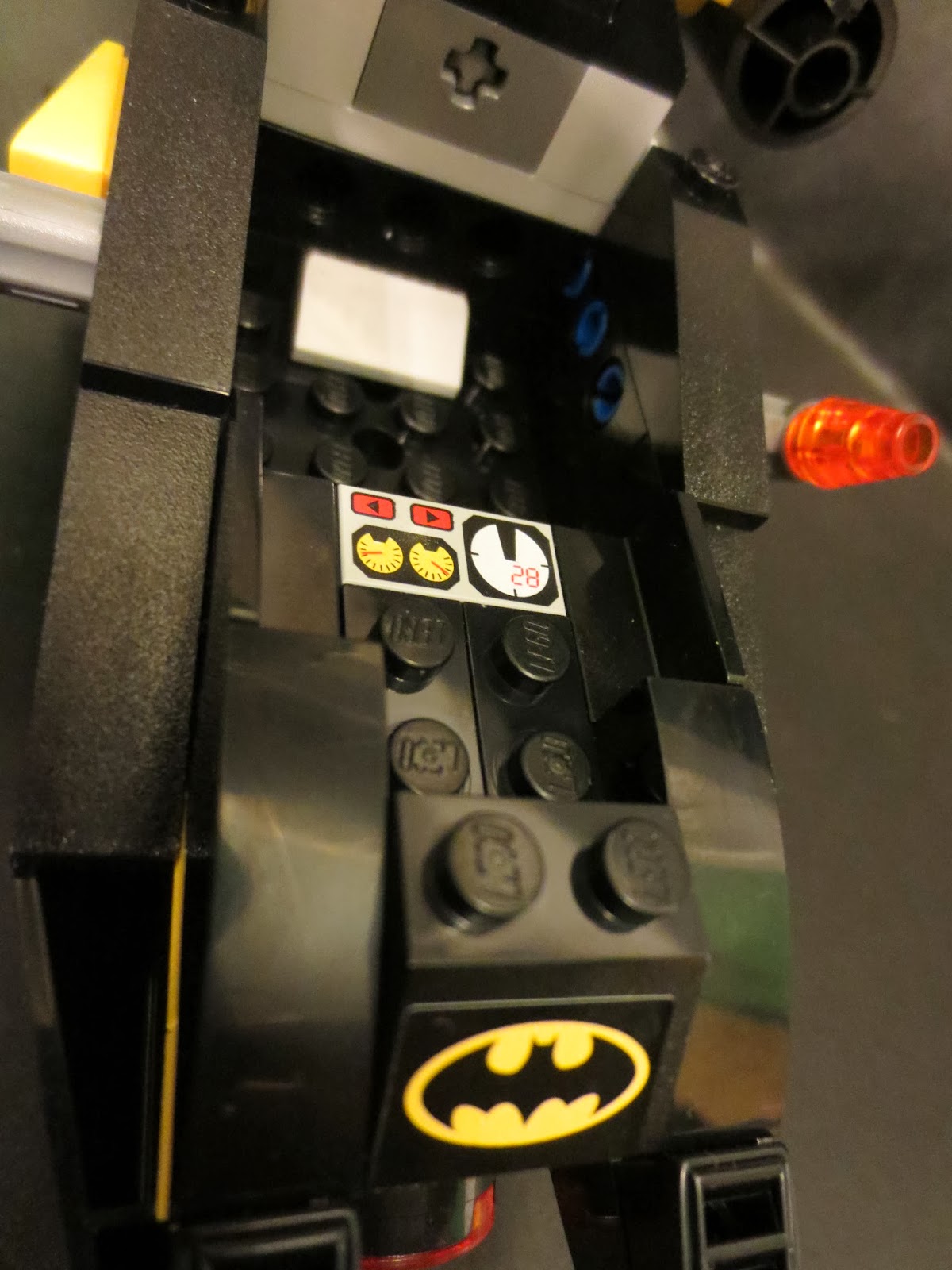 There are some very cool little features like the detailed instrument tile here. I really wish the Batman logo was printed, though, and not just a sticker. I really dislike stickers on Lego bricks. Printed pieces look so much better! 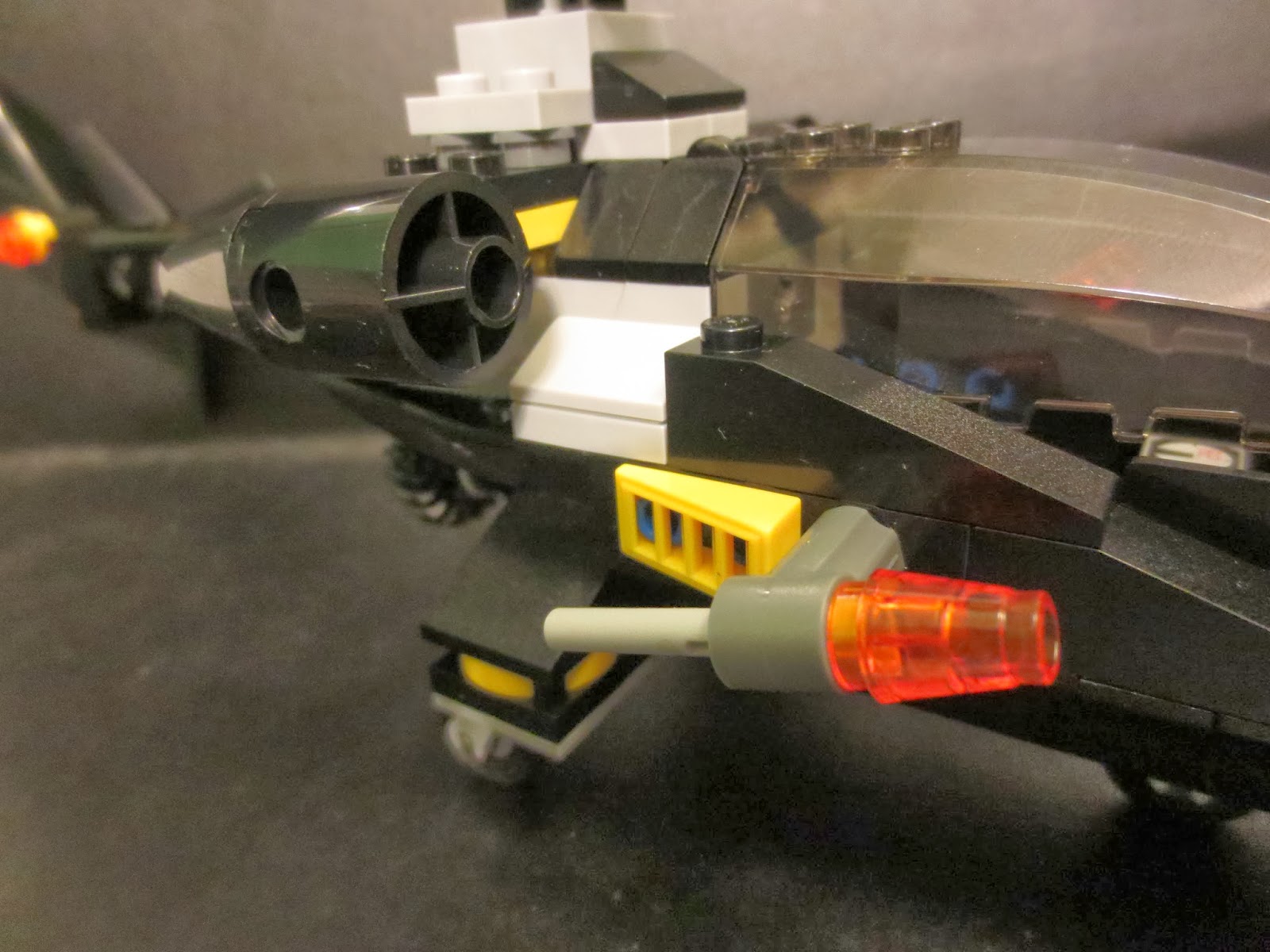 While I sometimes find the flick-fire missiles to be a bit silly (particularly on The Lord of the Rings sets, they rally work here and add soem nice armaments to the Batcopter. The searchlight is a really cool feature, too. Very unusual looking but lots of fun, particularly because it can pivot. The jets on the sides are neat, but the tend to swivel out of position with just a simple touch.

There's a winch hidden under the tail section of the aircraft. It simply raises and lowers when you turn the black knob. According to the toys description, the intention is that you can use it to lift Nightwing's glider out of danger. That seems kind of an odd use of this, but the winch is a cool feature nonetheless. 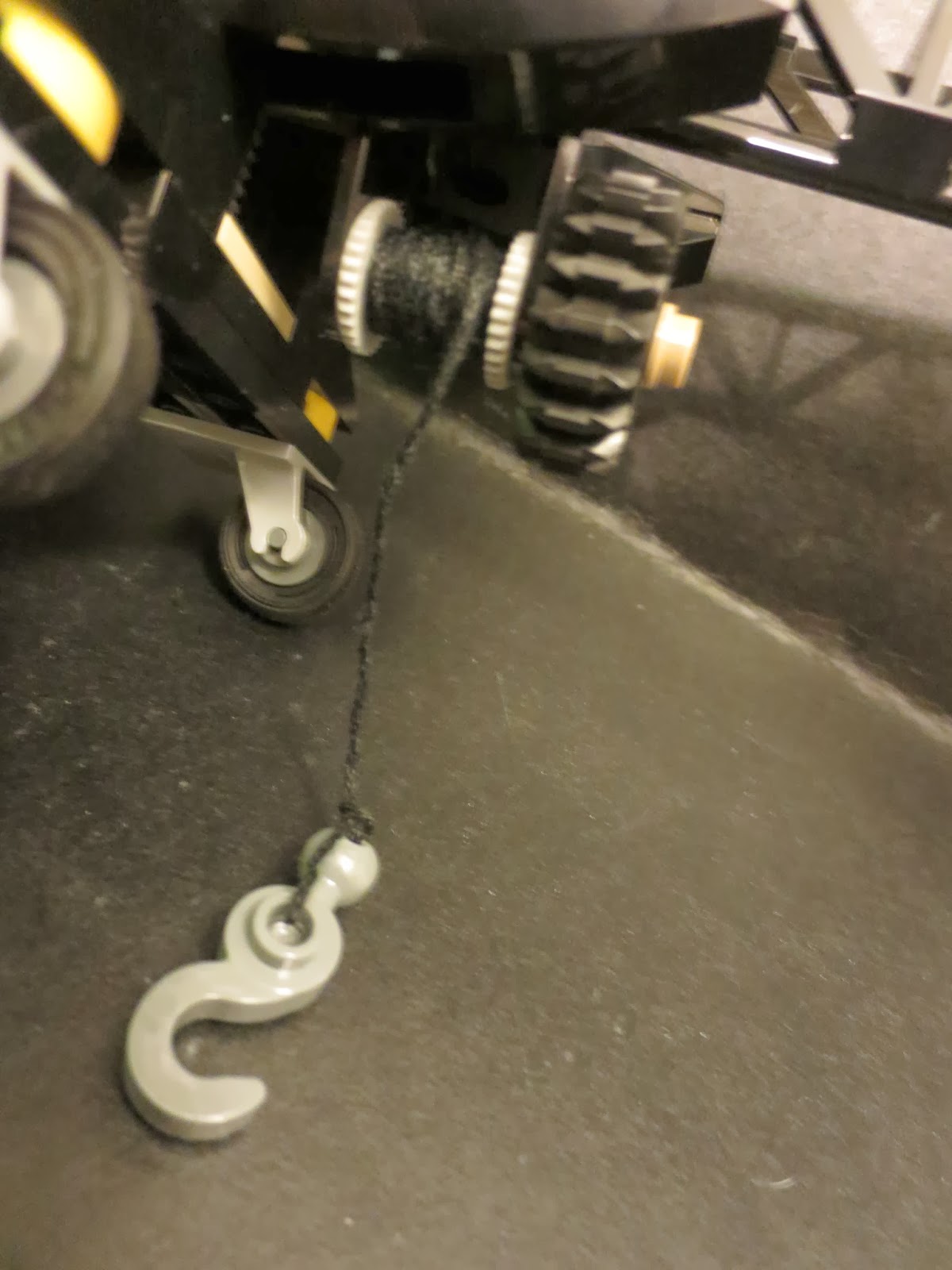 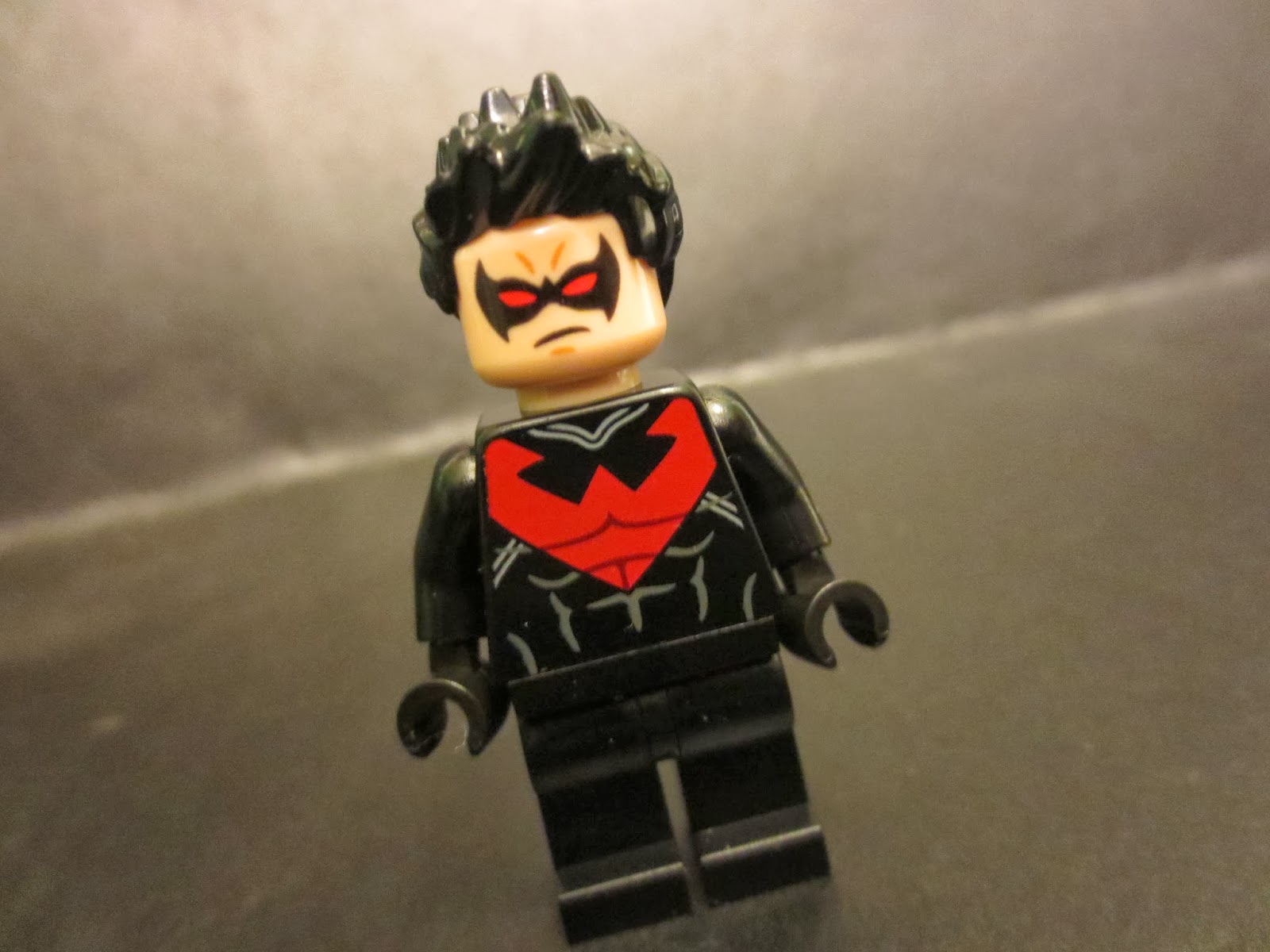 While Man-Bat is probably the figure most people want, I think Nightwing is my favorite. I love the New 52 styled red outfit and eyes. Nightwing looks really harsh and terrifying here. He's got some cool muscle detailing on both his front and back torso and two faces. You can choose to have either a grinning Nightwing or a serious looking Nightwing. The spikey hair really works for him and is a pretty cool hairpiece. I wish he came with his Eskrima sticks, but you can always give him the extra Batarang that came with Batman. 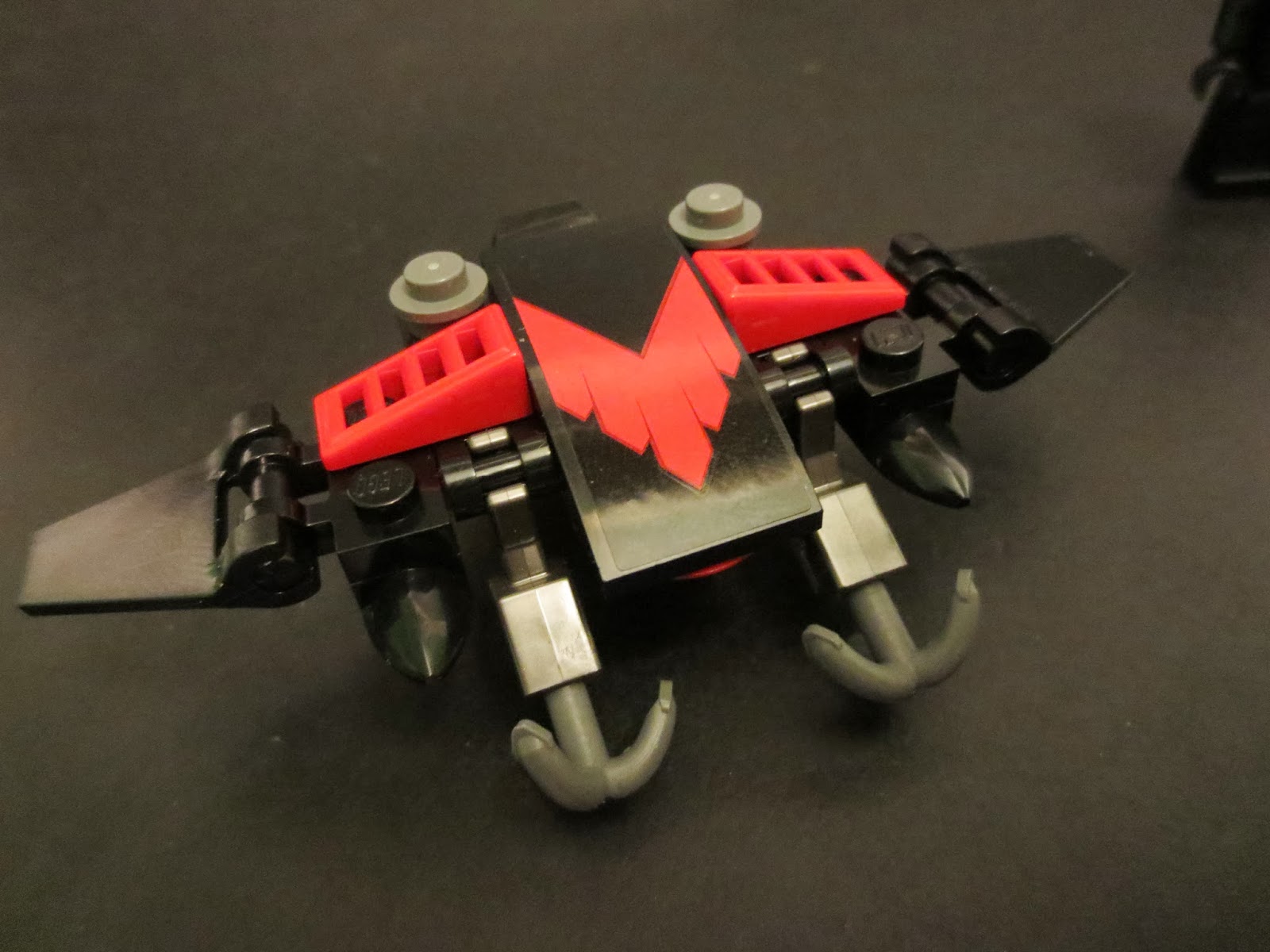 I like the color and design of Nightwing's glider, but it's really bizarre functionally. On there's a place for Nightwing to stand on the underside of it, but there is really no decent way to set this piece up unless you use a stand or something. It doesn't balance well and if you lay it flat like in the picture on the right, Nightwing is basically just crushed or hidden by it. The grappling hooks are on hinged arms and the wings on the sides also can fold into different positions. 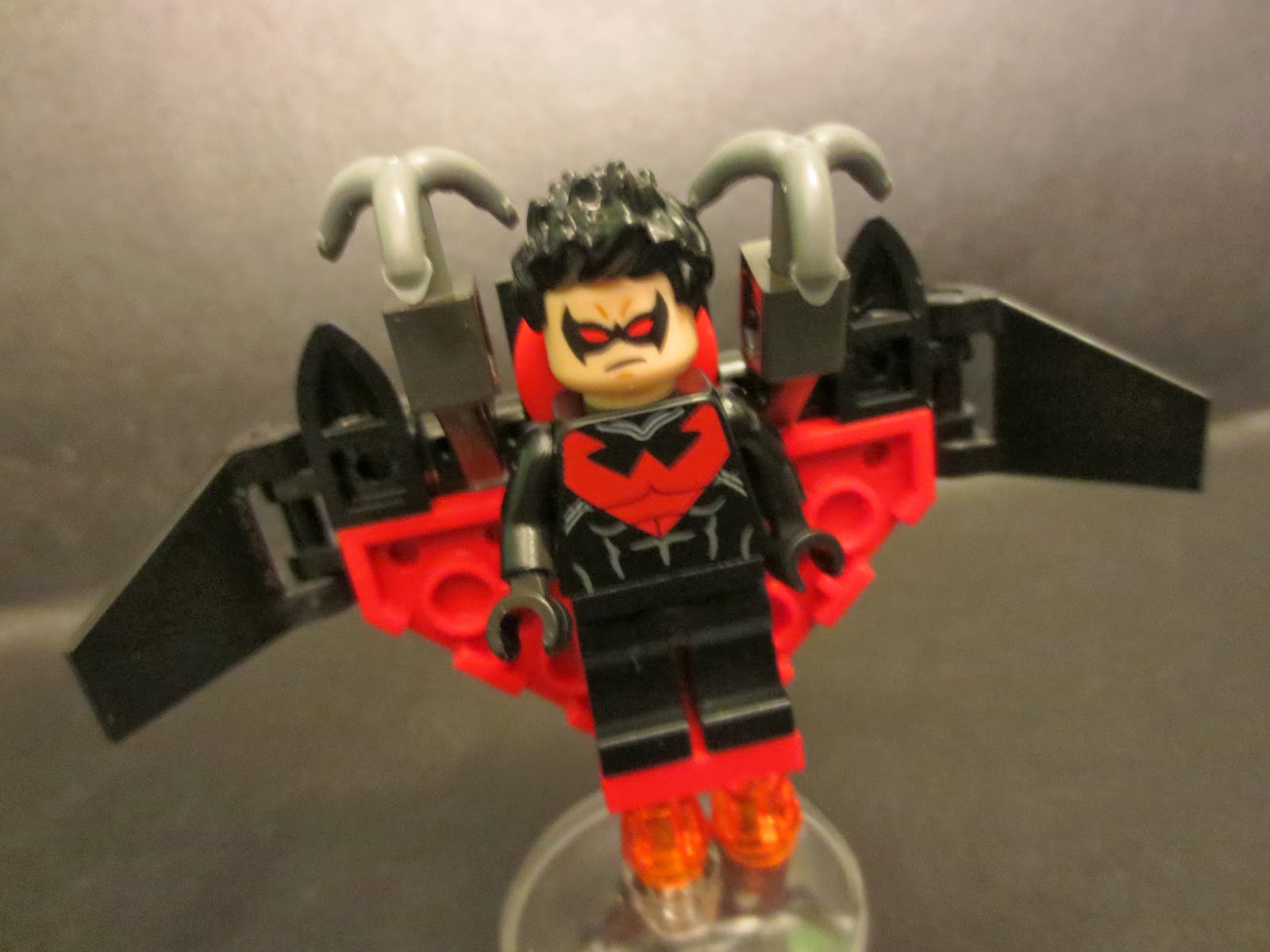 Find yourself a clear base, however, and this is a pretty neat looking small behicle. The two "jet blasts" are a part of the actual model. I wish there was a handle or something for Nightwing to hold onto, though. 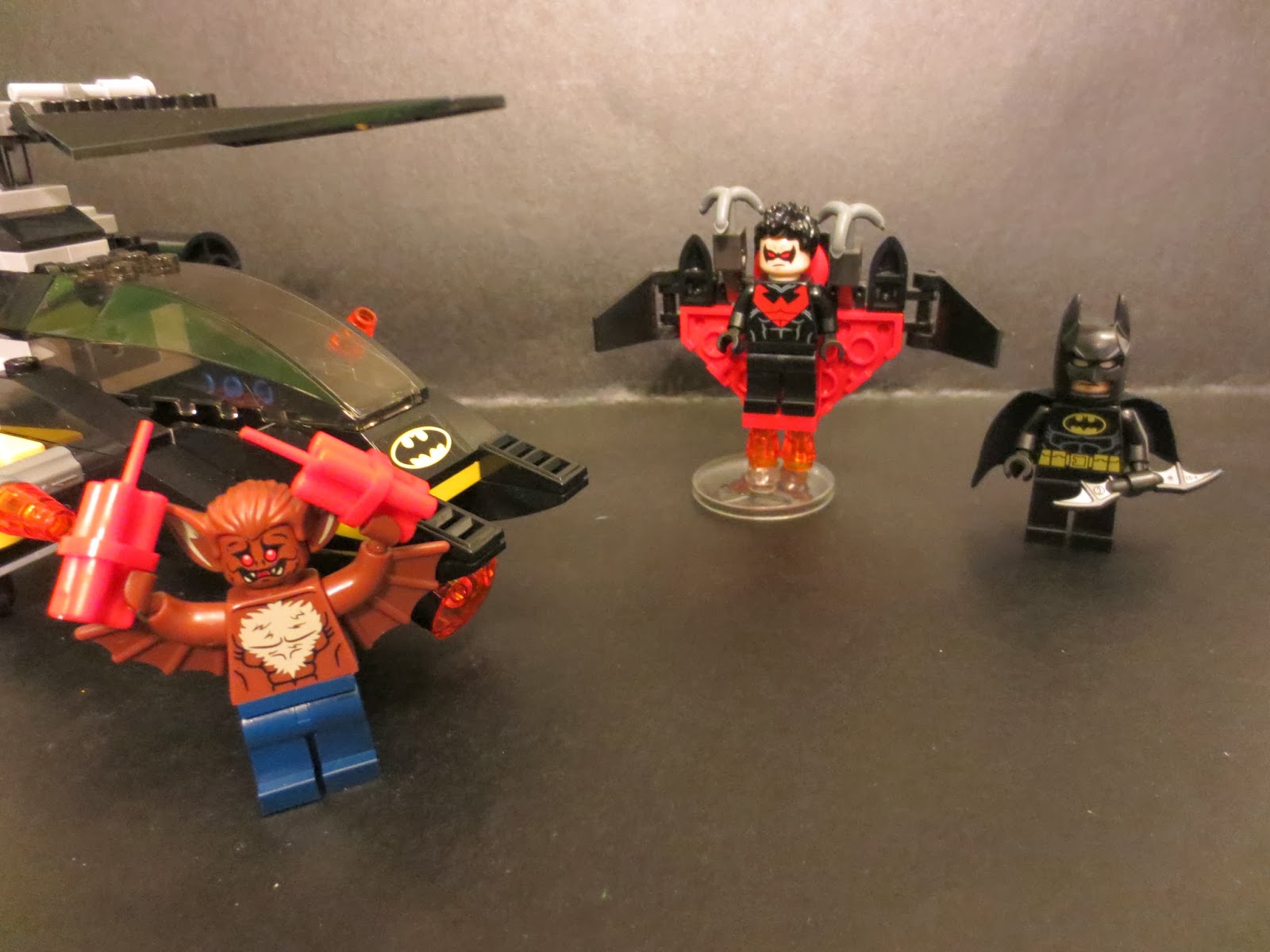 This is a fun smaller set that should only run you around $20. While it's a bit disappointing to not get a new or unique Batman mini, you're still getting three solid minifigures here, a fairly nice medium sized vehicle, and a decent mini vehicle. I'm giving the set a Great. It's really cool to have one of the most desired minifigures to come with a set on the lower end of the price scale. There's a lot to build and some neat accessory pieces (grappling hooks, dynamite) to spice things up. If you can get ahold of a clear Lego stand (or even a regular one) you'll like the Nightwing glider even more.