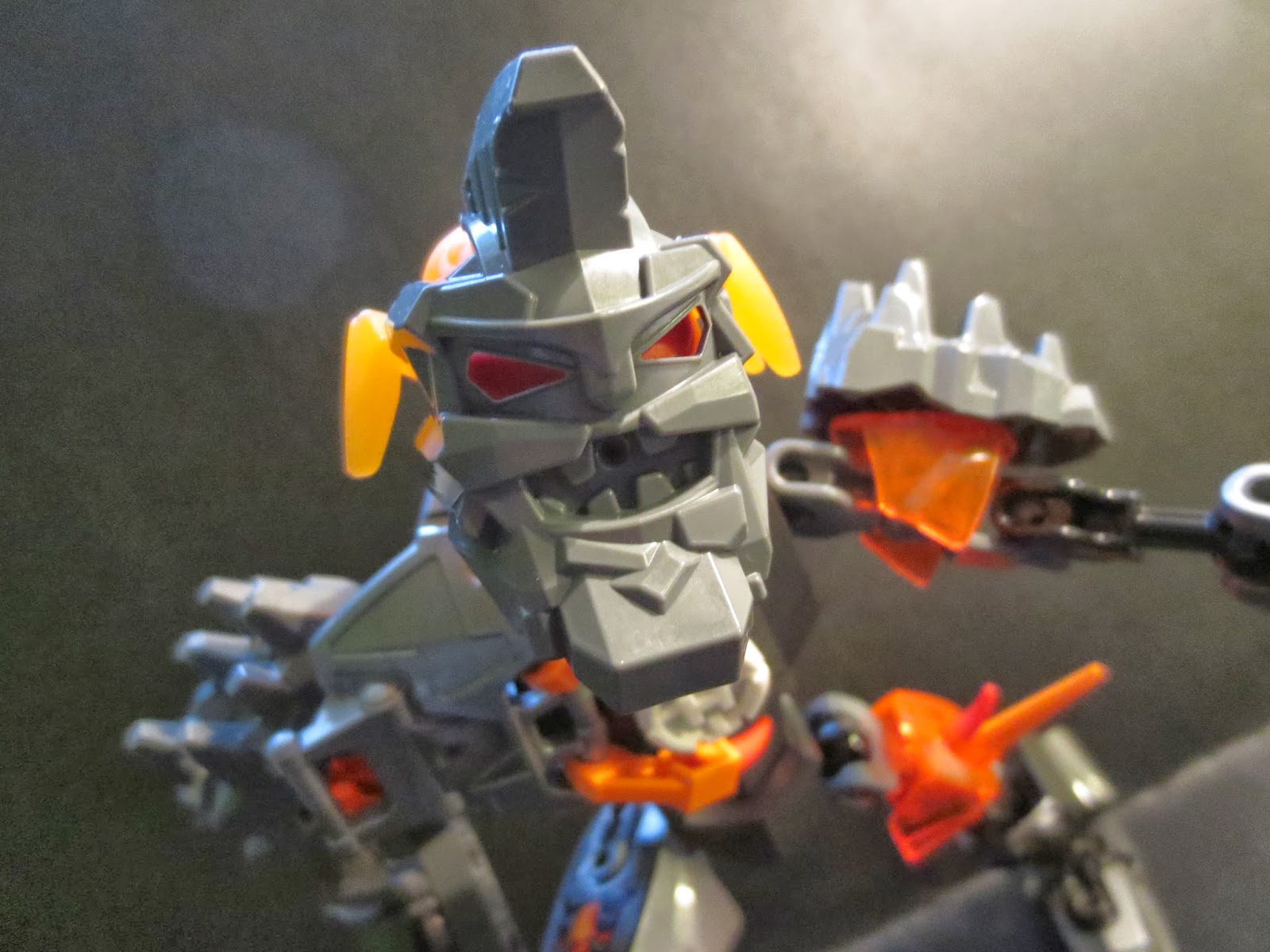 I've already reviewed the Hero Factory Rocka on The Epic Review so now it's time for one of the bad guys: Bruizer. As I said in my Rocka review, while these guys have been around since 2010 I wasn't even aware of them. Bruizer comes from the 2013 theme "Brain Attack" and is a rock giant that has been transformed into some kind of evil beast via an evil brain. Bruizer's an interesting looking figure that reminded me of various 80's henchman such as Hacker from Centurions or Beastman from Masters of the Universe, so I decided to give him a try. Read for a brief look at Bruizer? Then join me after the break... 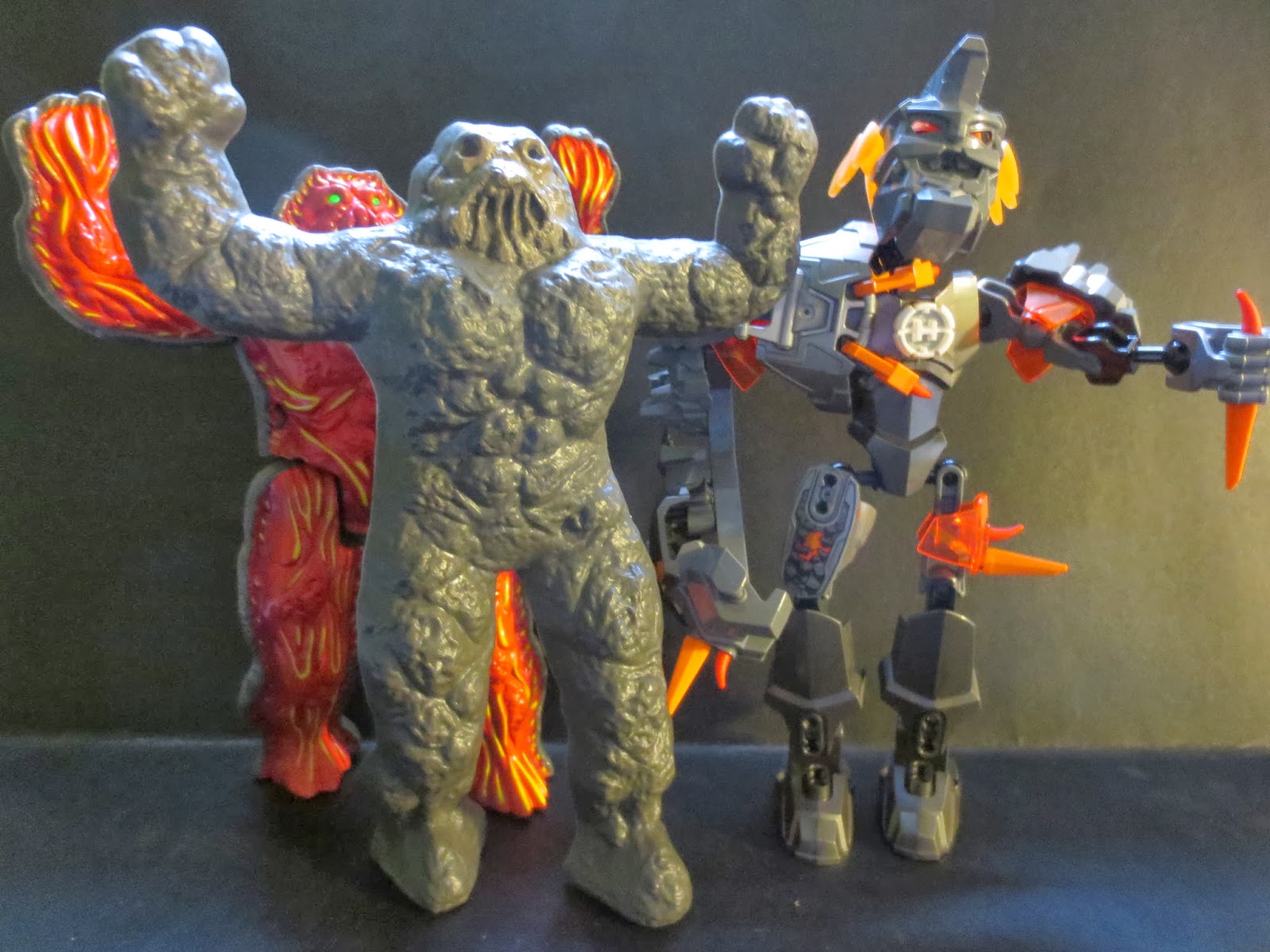 Bruizer comes from the assortment of figures in the Hero Factory line that is a little larger than the basic guys, so he's actually between 8 1/4 and 8 1/2 inches tall. He's composed from 62 nontraditional Lego pieces that utilize Technic pins and ball joints rather than the traditional Lego studs. This means that not only can he be disassembled and changed himself, but he can be customized with elements from other figures, too. Like Rocka, Bruizer is packaged in a reusable plastic bag that can store the figure, his accessories, and his instructions. 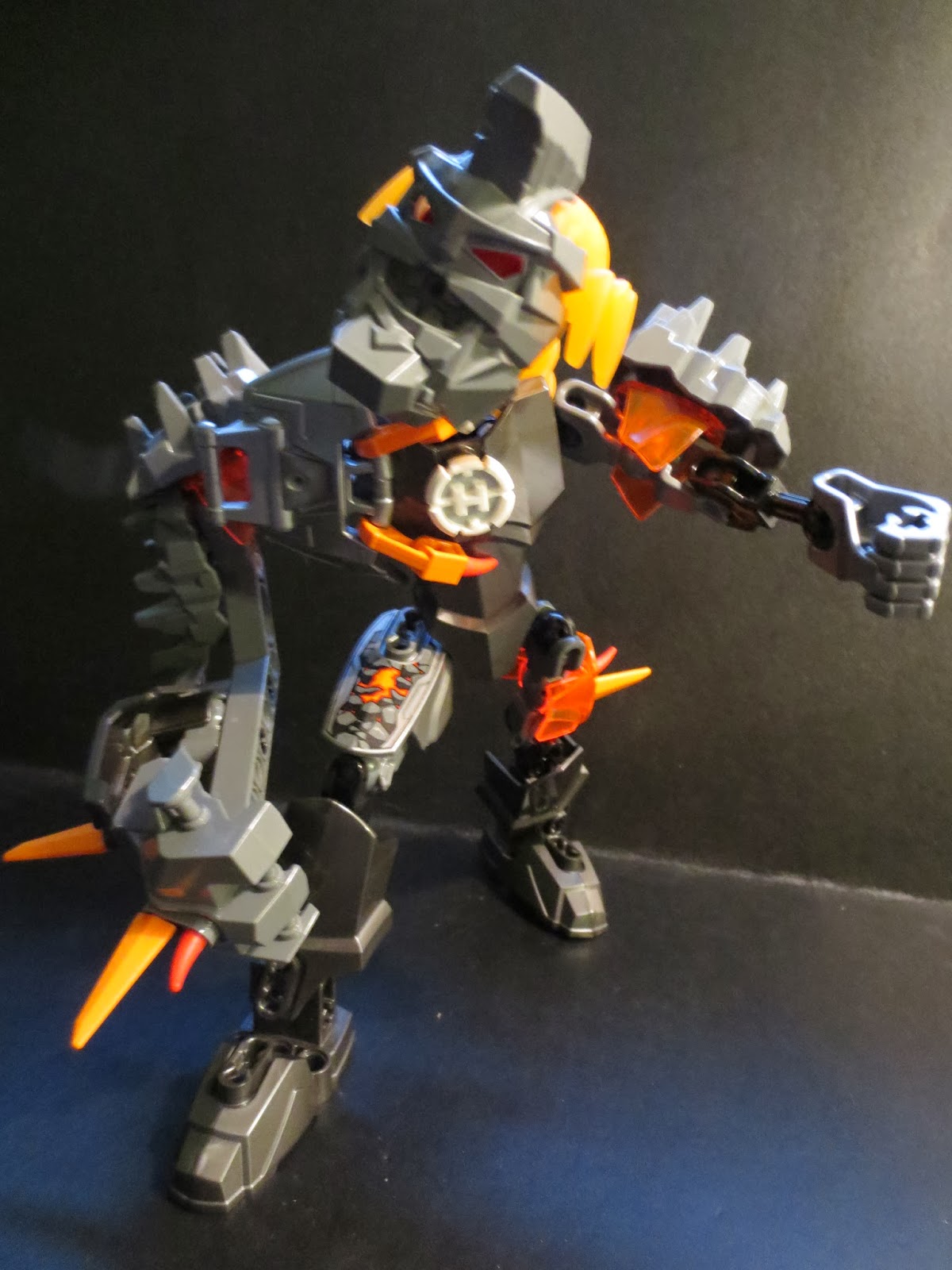 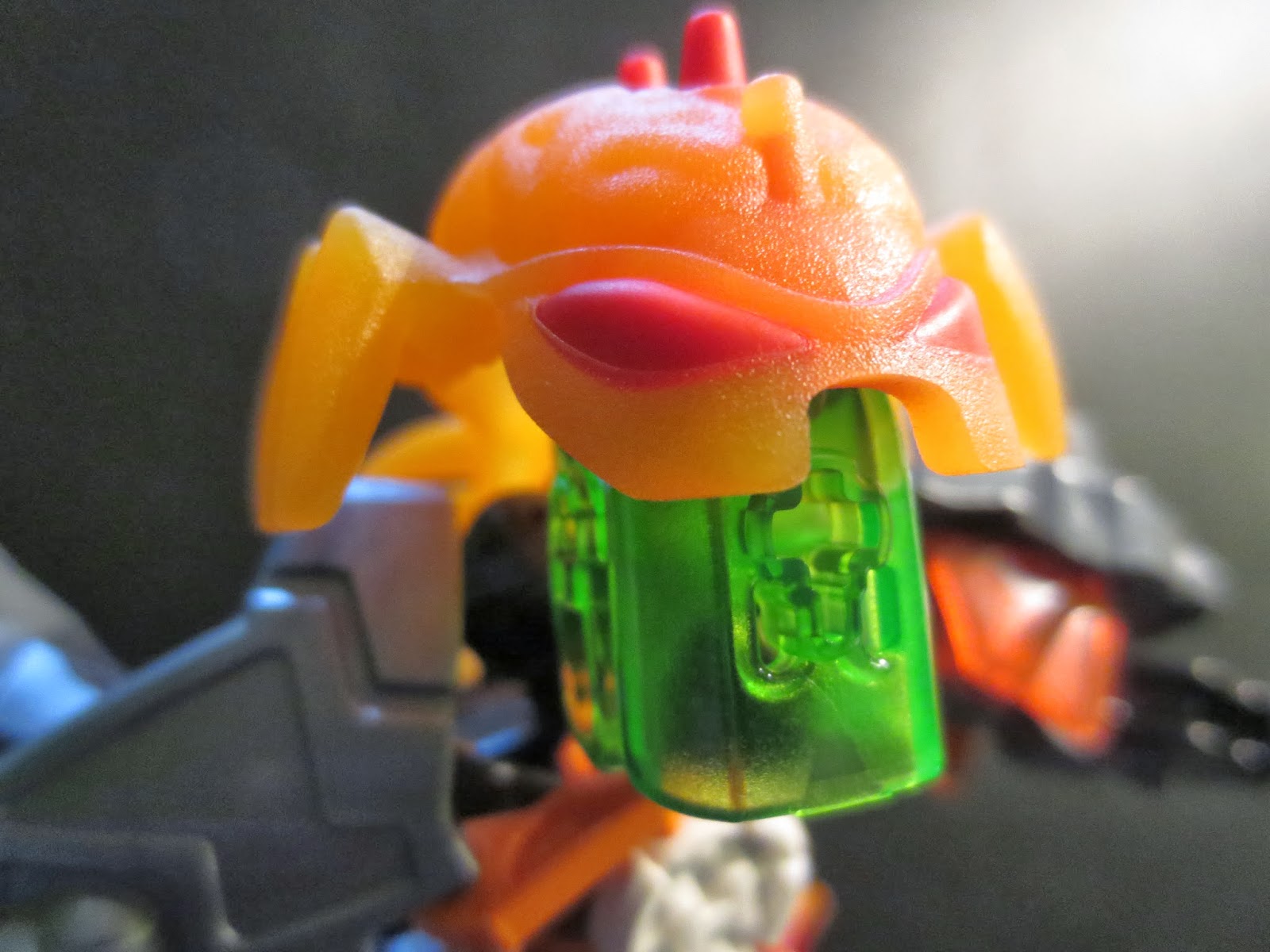 While lots of pieces are shared between the Hero Factory figures, Bruizer seems to have a pretty unique look. While his lower body and torso features the typical armored plating, the shoulders, right arm, and head have an excellent rocky texture to them. He kind of reminds me of Magnokor from Inhumanoids. The little spikes jumping off his body at different points really add a lot of character, as does the creepy face. There's a giant rubbery brain monster hanging out of the back of his head. It's really icky looking! 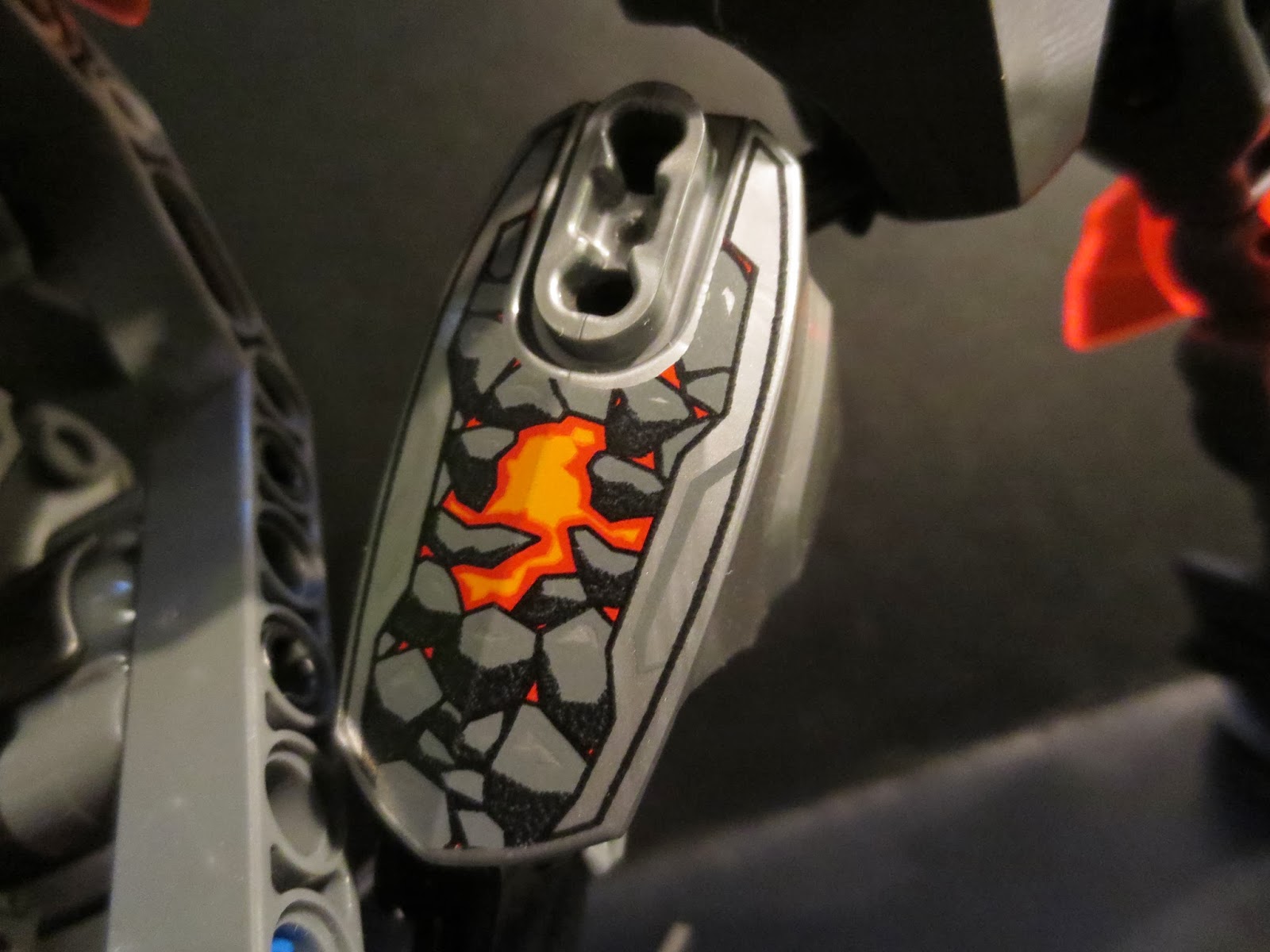 While most of Bruizer's color comes from the plastic the various Lego elements are molded in, there are a few printed or painted pieces. The Hero Core on Bruizer's chest has a touch of grey paint on it and the orange creature seems to have some red painted elements like spikes and eyes. The coolest bit, though, is the printed rock and magma on Bruizer's right thigh. It's a neat design element that seems fairly unique for this line. 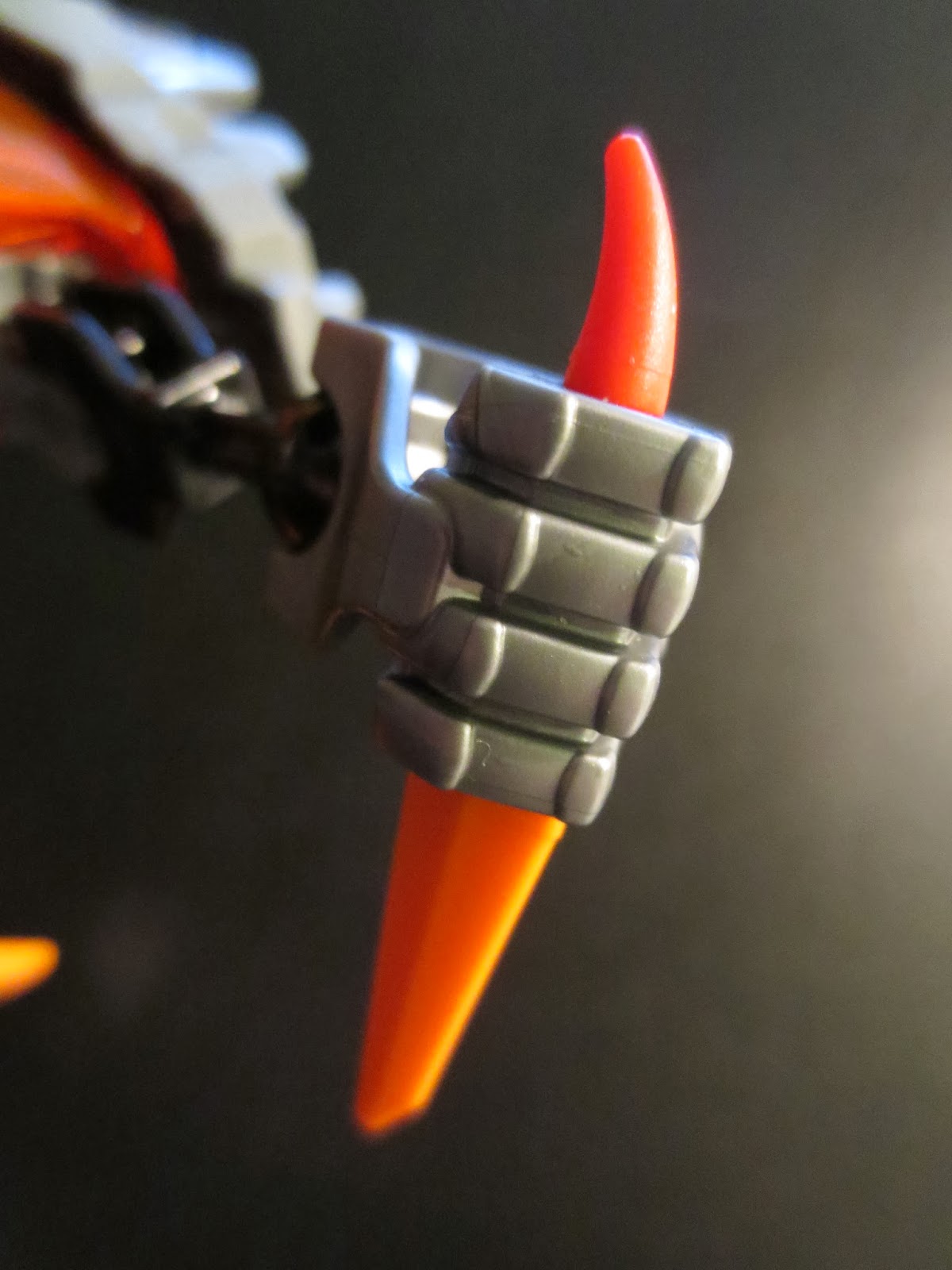 Bruizer's biggest weapon seems to be his giant right arm that's covered in spikes and armored plating. He does have a dagger, though, that fits in his left hand. It's made out of two of the spiked pieces that hang off of his body. What if one day he just broke that thing off of his own body? Dang, that's hardcore! The Hero Core and Brain Creature are also removable, but definitely aren't traditional accessories. 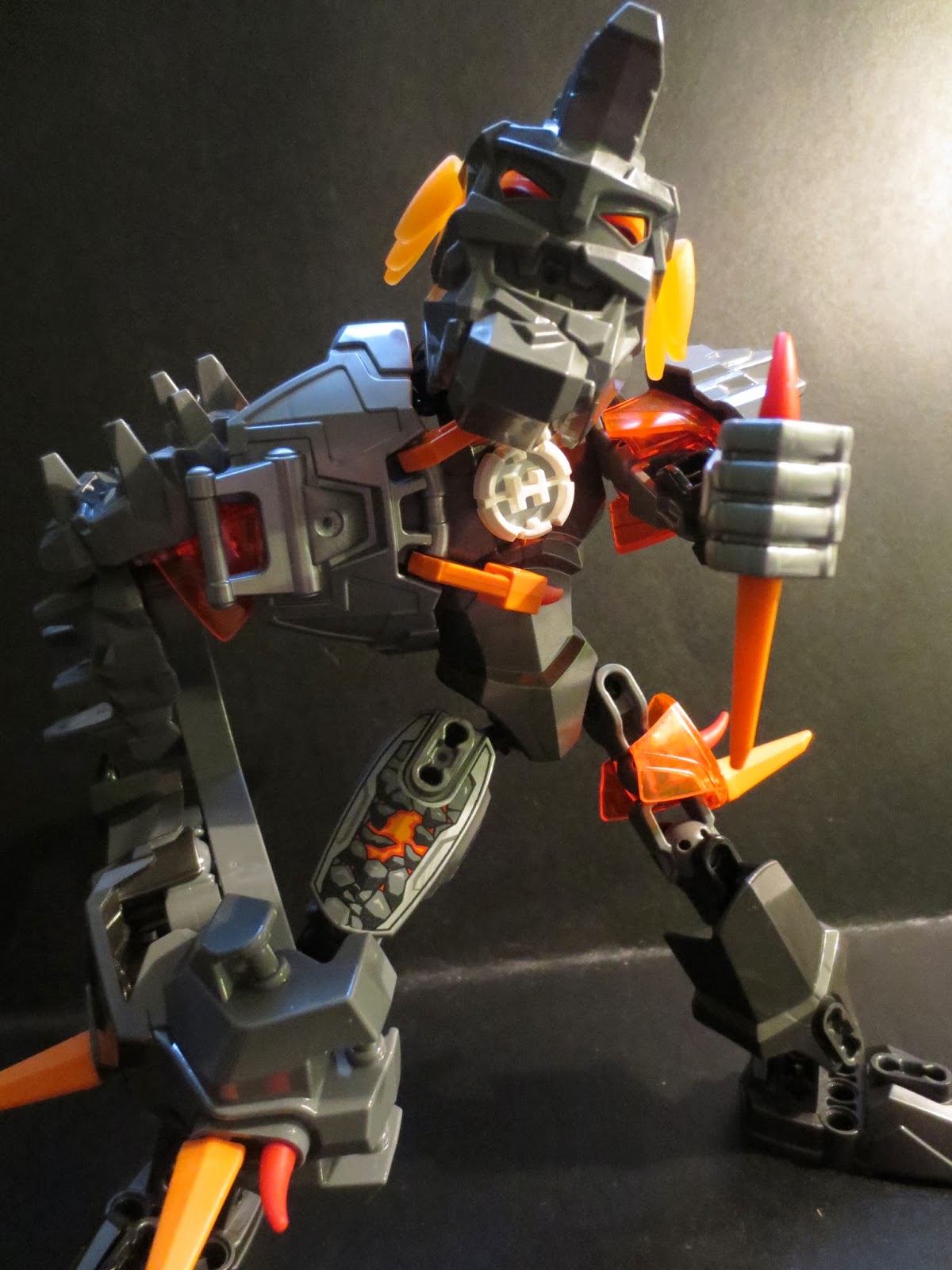 I like Bruizer, although I feel like his action feature interferes with his overall coolness. He definitely seems like a great brute for the Hero Factory heroes to battle and has a design that really makes me think of various 1980s action figures. These are fun figures just to pick up and while I don't think I plan on snagging anymore, I can definitely see the appeal. I like his design better than Rocka, but I'm not sold on the action feature. I'm giving Bruizer a Good and a 1/2. He's still fun, but the action feature interferes too much with the articulation and tends to fall off over time. Speaking of 1980s bad guy henchmen, who is your favorite? Comment below and let us know!