Lego Review: Dol Guldur Battle from The Hobbit: The Desolation of Smaug by Lego 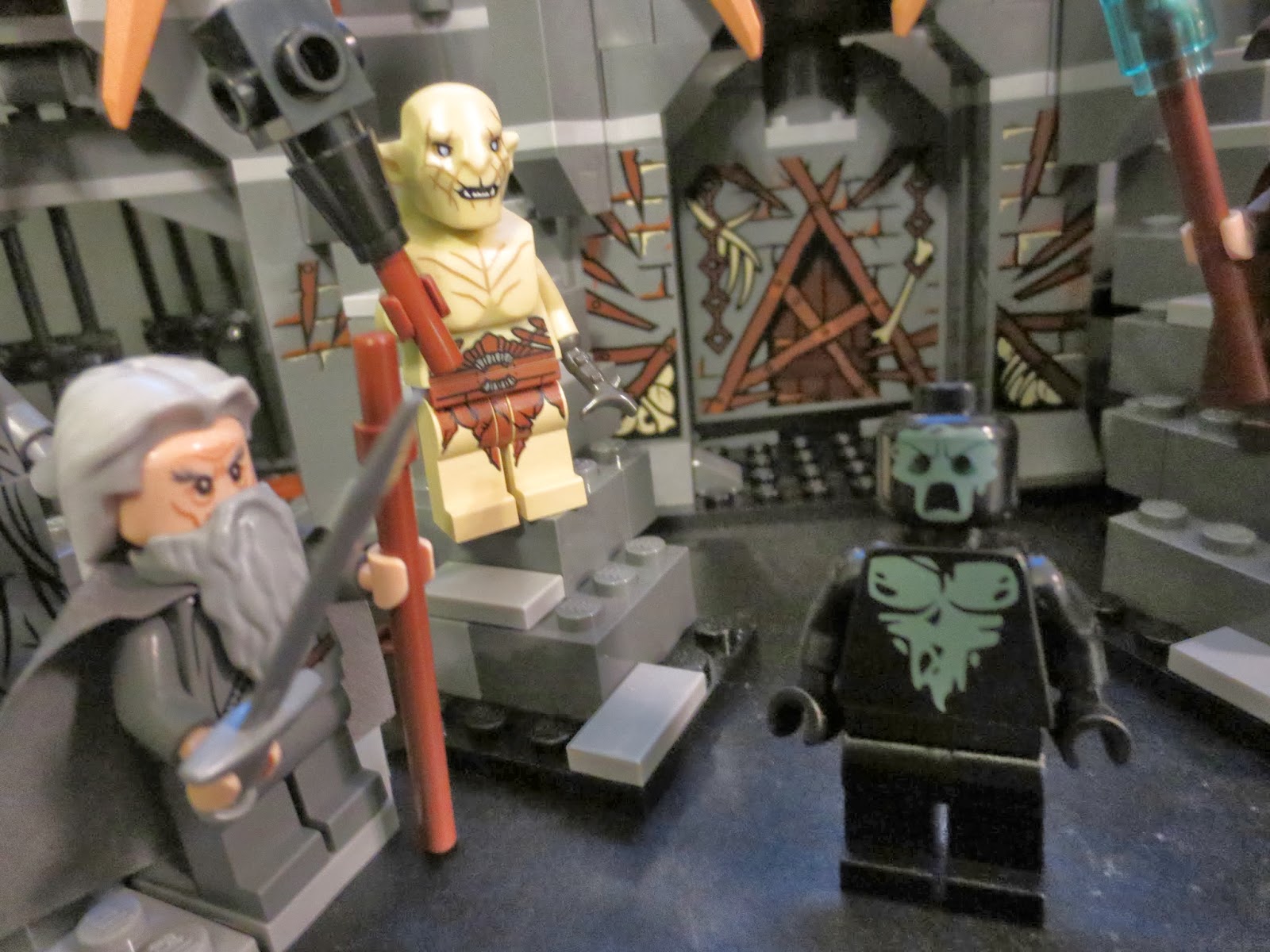 I was really looking forward to scenes taking place in Dol Guldur in The Hobbit: The Desolation of Smaug. I actually assumed that Gandalf and Radagast confronting the Necromancer would be the climax of the second film, but it turns out I was wrong. Actually, and I hope this isn't spoiling much, but Dol Guldur doesn't get much screen time in the film. I thought this was quite peculiar, particularly since Lego chose to make the Dol Guldur Battle the flagship set for their Hobbit theme this year. Of course, changing up the release of the films by stretching The Hobbit from two films into three definitely had to cause some confusion and headaches for Lego and other companies producing merchandise. Anyways, I reviewed the smaller set Dol Guldur Ambush a month or so ago but am just getting around to this one. I snagged both of these because I figured they'd fit perfectly into my giant haunted castle that I've built around the Monster Fighters Vampyre Castle. How's the set on it's own, though? Check it out after the break.... 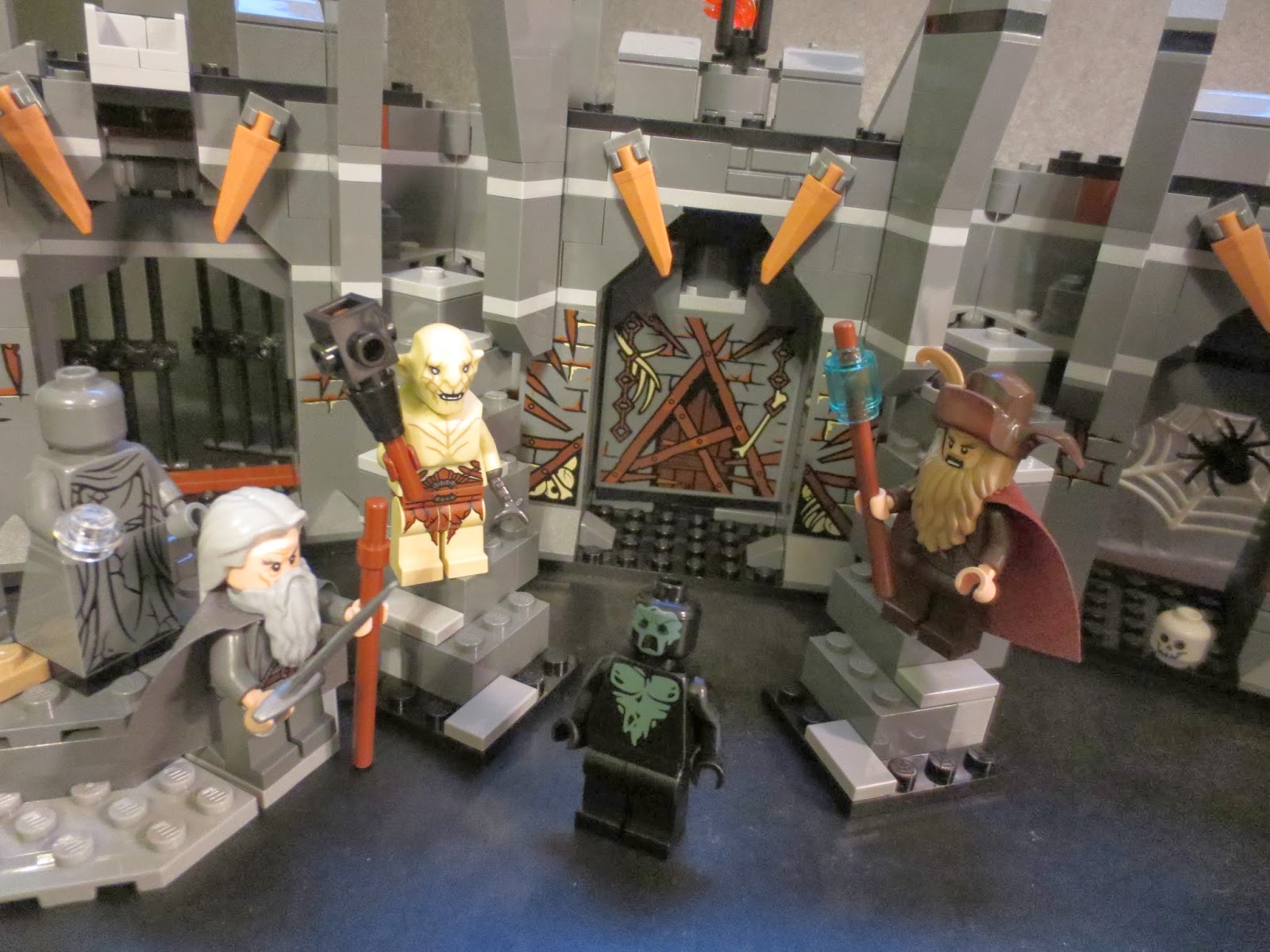 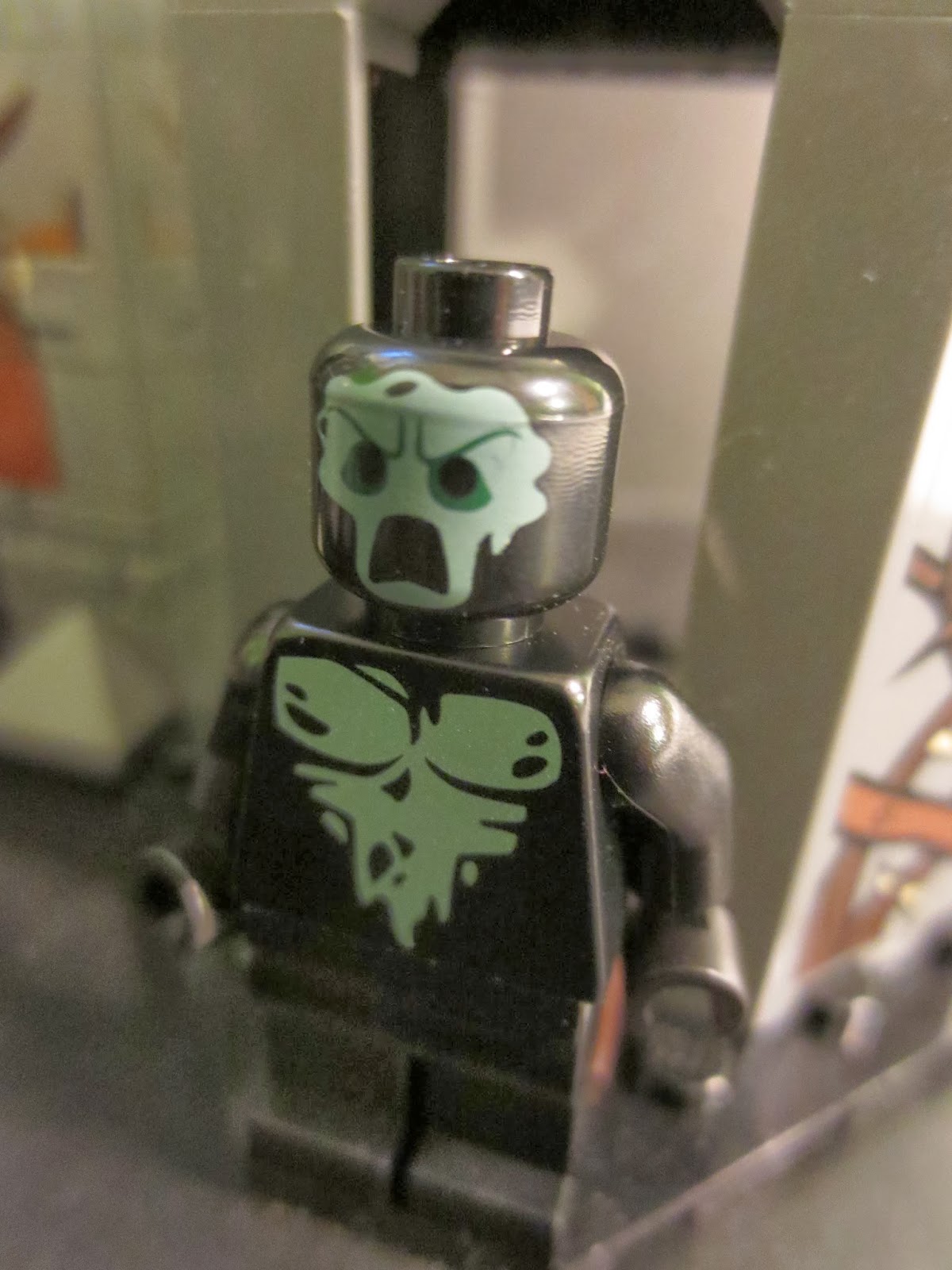 The Necromancer is a fairly plain little figure. He does resemble the shade we see in the film, but it's still a bit dull. He's really the only weak Lego minifigure in this set, though. 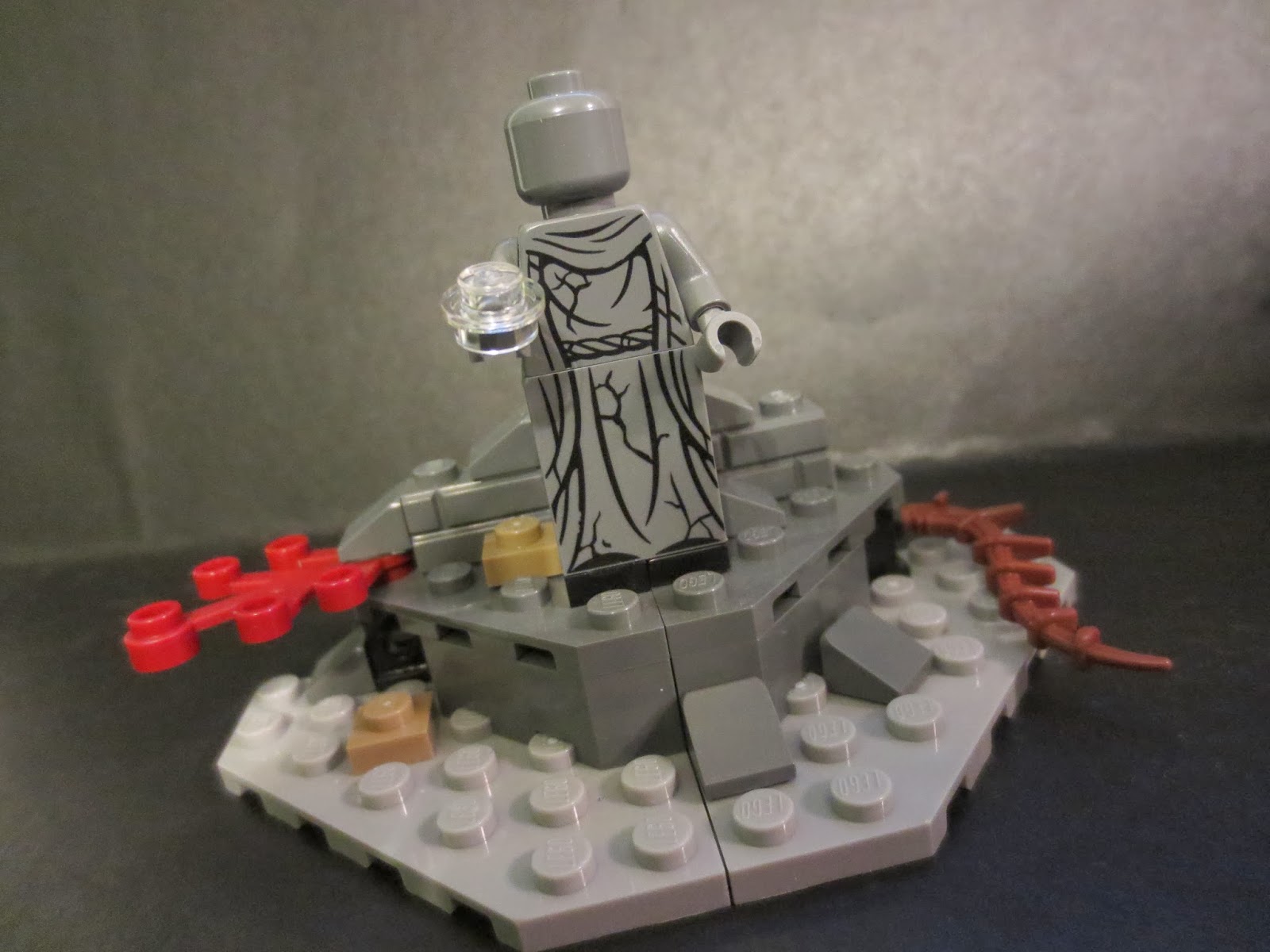 The statue is a really cool little mini. It's built using a sloped dress/ robe piece and does have back printing that shows off it's robes. It's holding a clear plastic stud. A base for the statue is included and makes a great element for nearly any display. 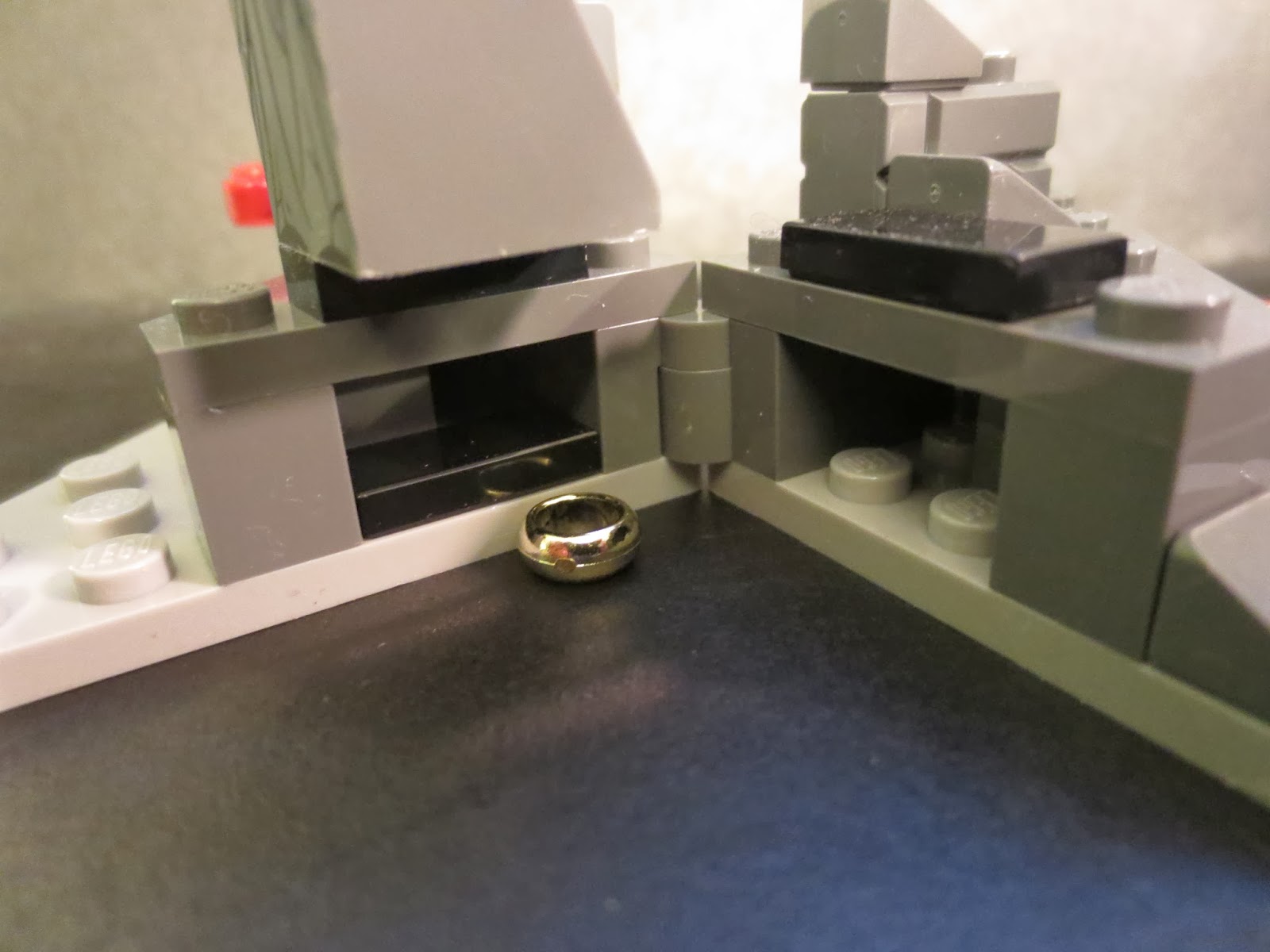 The base has a great red foliage piece and a brown vine growing out of the base. It's built on a hinge so you can open it up and find a hidden wizard ring inside. I expected this hidden ring element to play some role in the film, but it didn't. 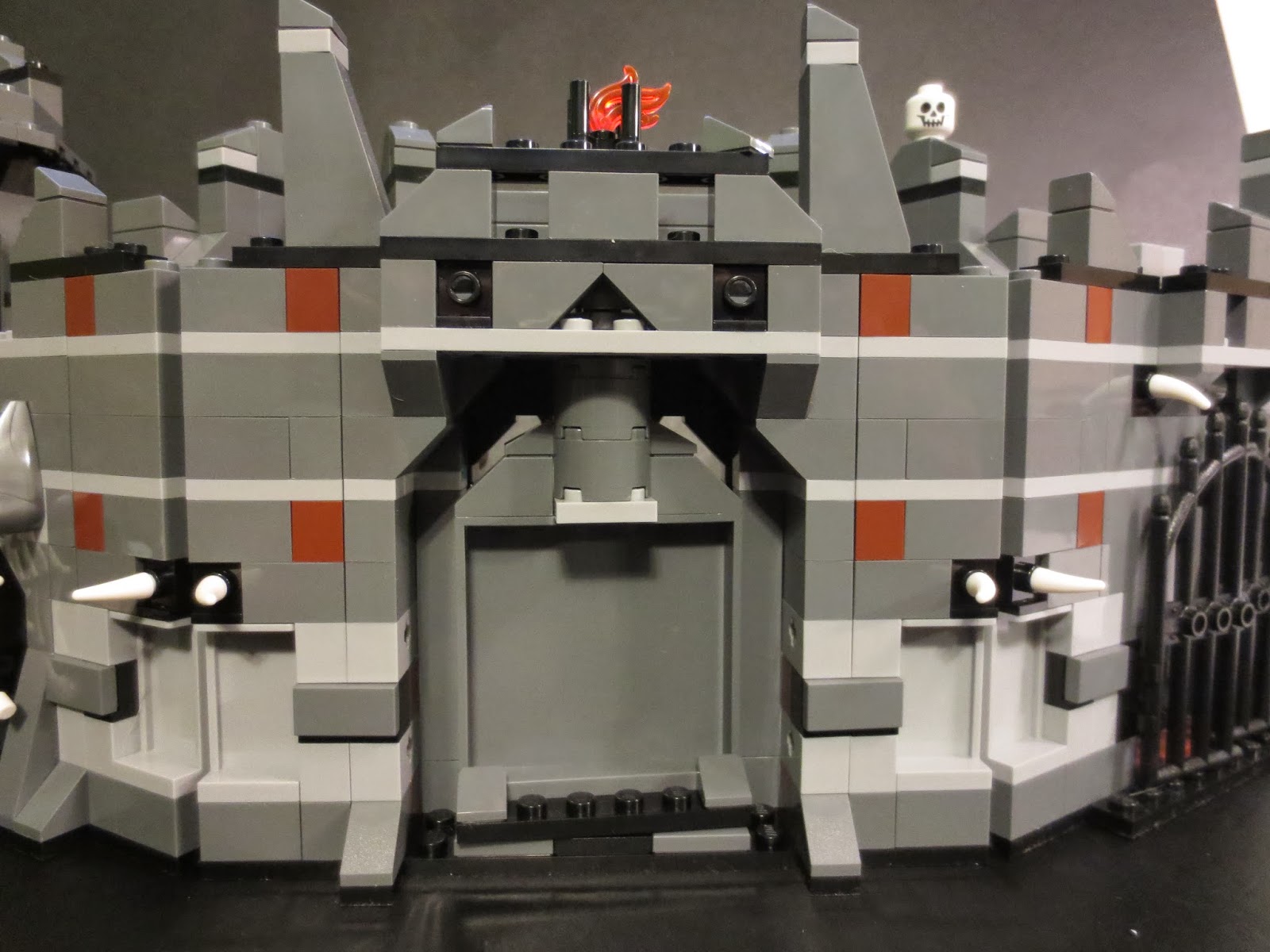 The fortress is built in segments as one long wall and each element of the wall attaches to the next.  The exterior of the wall is pretty bland except for a few bone spikes and little details that give the fortress an aged and cobbled together feel. 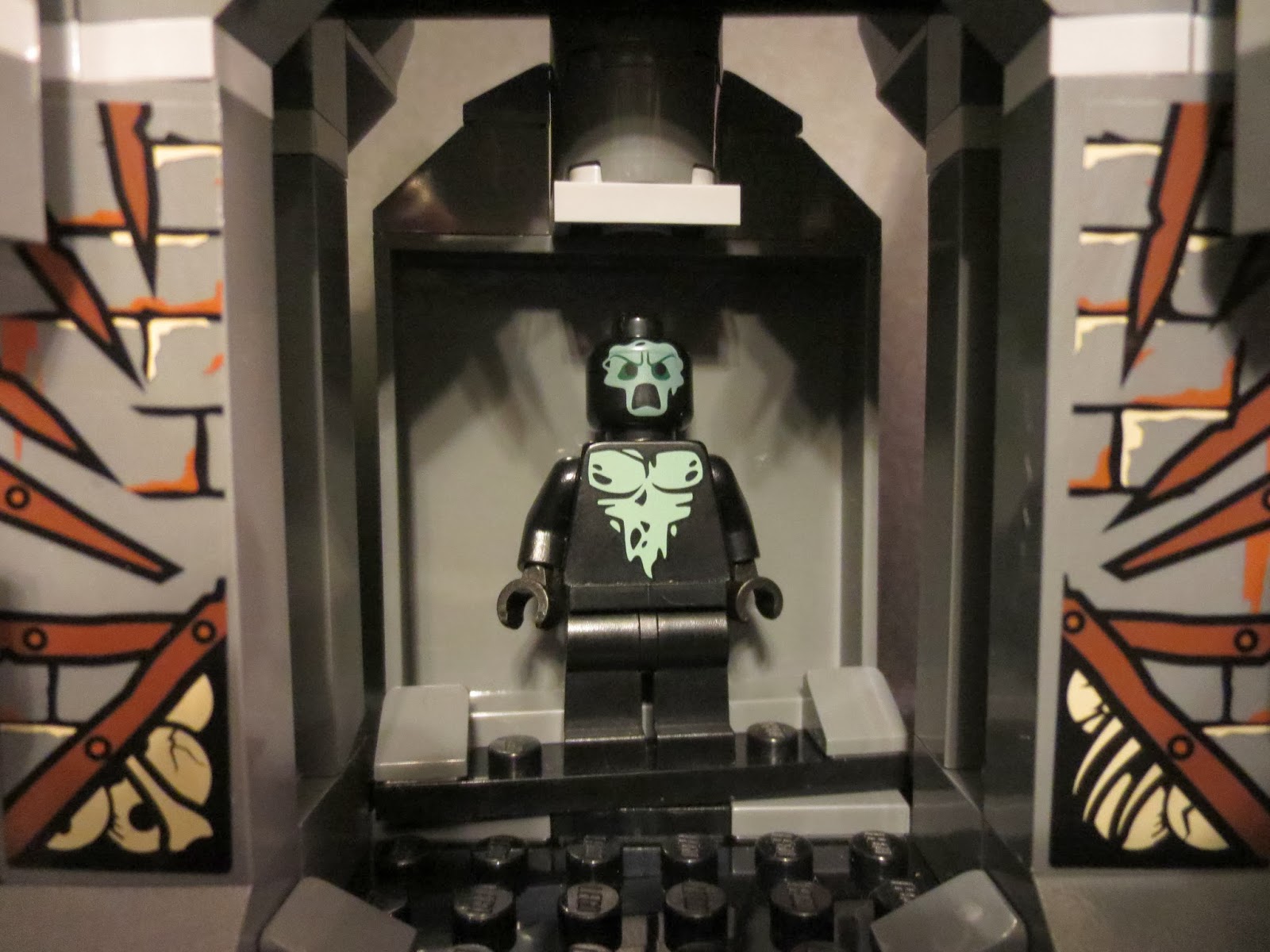 The centerpiece is the "magical wall" that allows the Necromancer to be revealed. From the interior looks like an arched doorway that leads into an old door covered with rotting boards and hanging bones (the door and such are simply a sticker on a flat surface- actually there are lots of stickers on this set). On the back of the door panel is a place for the Necromancer to stand. On top of the fortress is a torch on a small pedestal: turn the torch and the wall spins around to reveal the Necromancer.   Interestingly, this feature happens in The Hobbit: An Unexpected Journey and not The Desolation of Smaug. 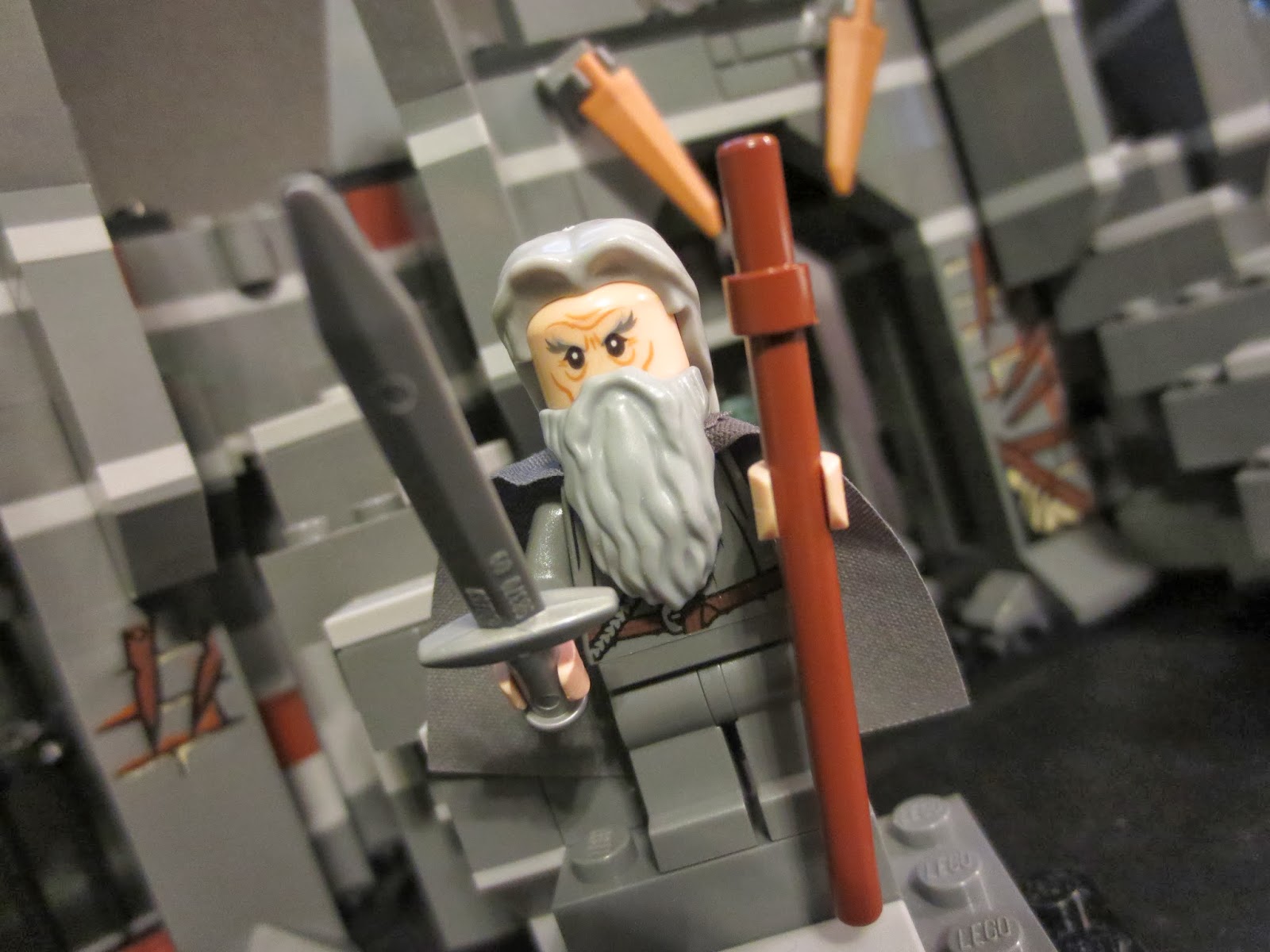 The set comes with a Gandalf figure, which is a character who I already have three or four of at this point. Still, who else would you include? This time Gandalf's not wearing his hat and instead has the long hairpiece used by so many wizards (including Dumbledore). He has printing on his back and comes wearing his cloak and wielding Glamdring and his staff. 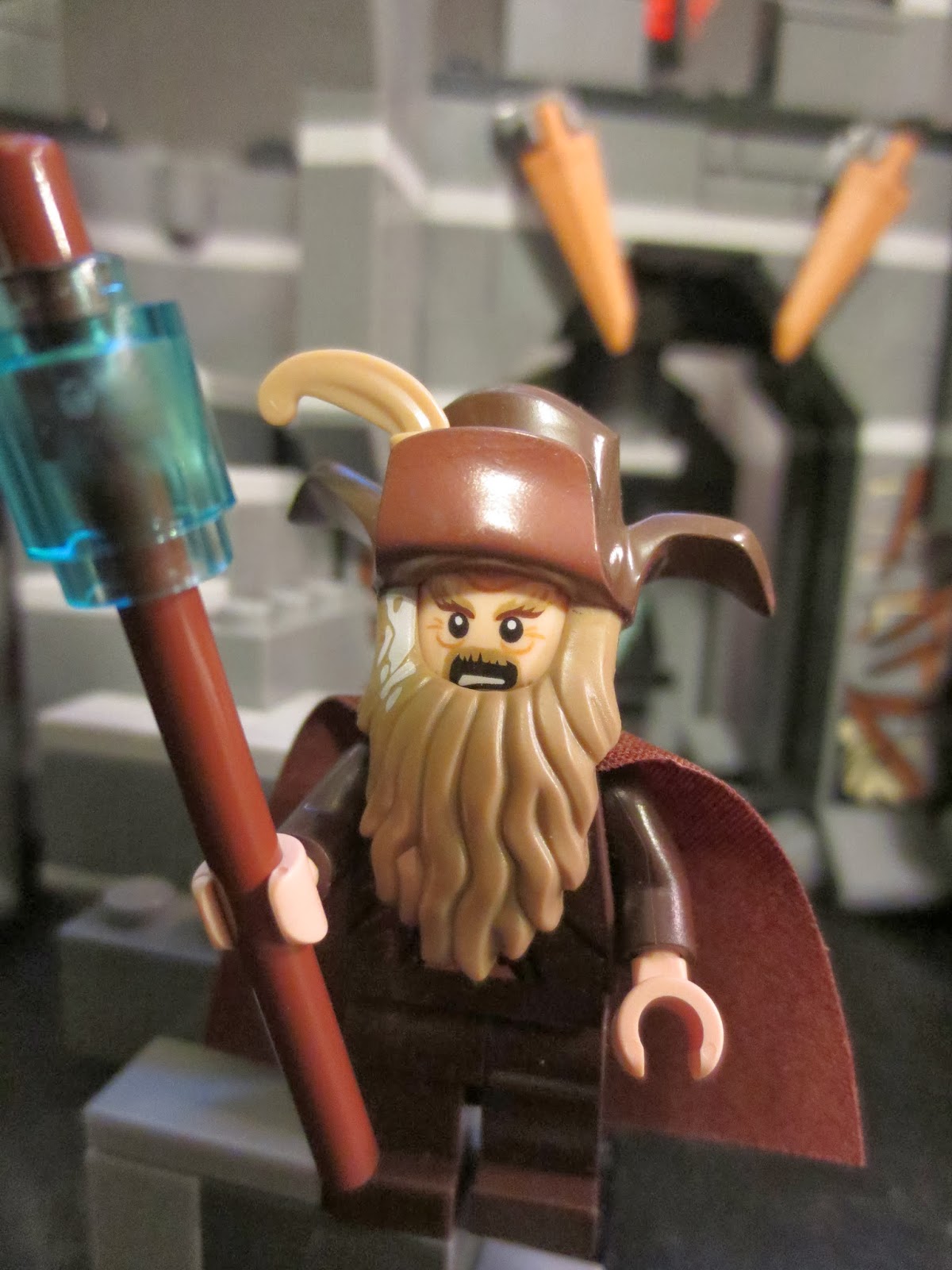 Radagast the Brown might just be the star minifigure of this set, though. He's got a really cool torso print that shows off his elaborate but shabby outfit and a very unique hat and beard-piece. It's got a spot for the little feather that hangs out of his hat. His staff features a translucent blue cylinder to give it that authentic look. He also has two faces: a happy face and an angry face. 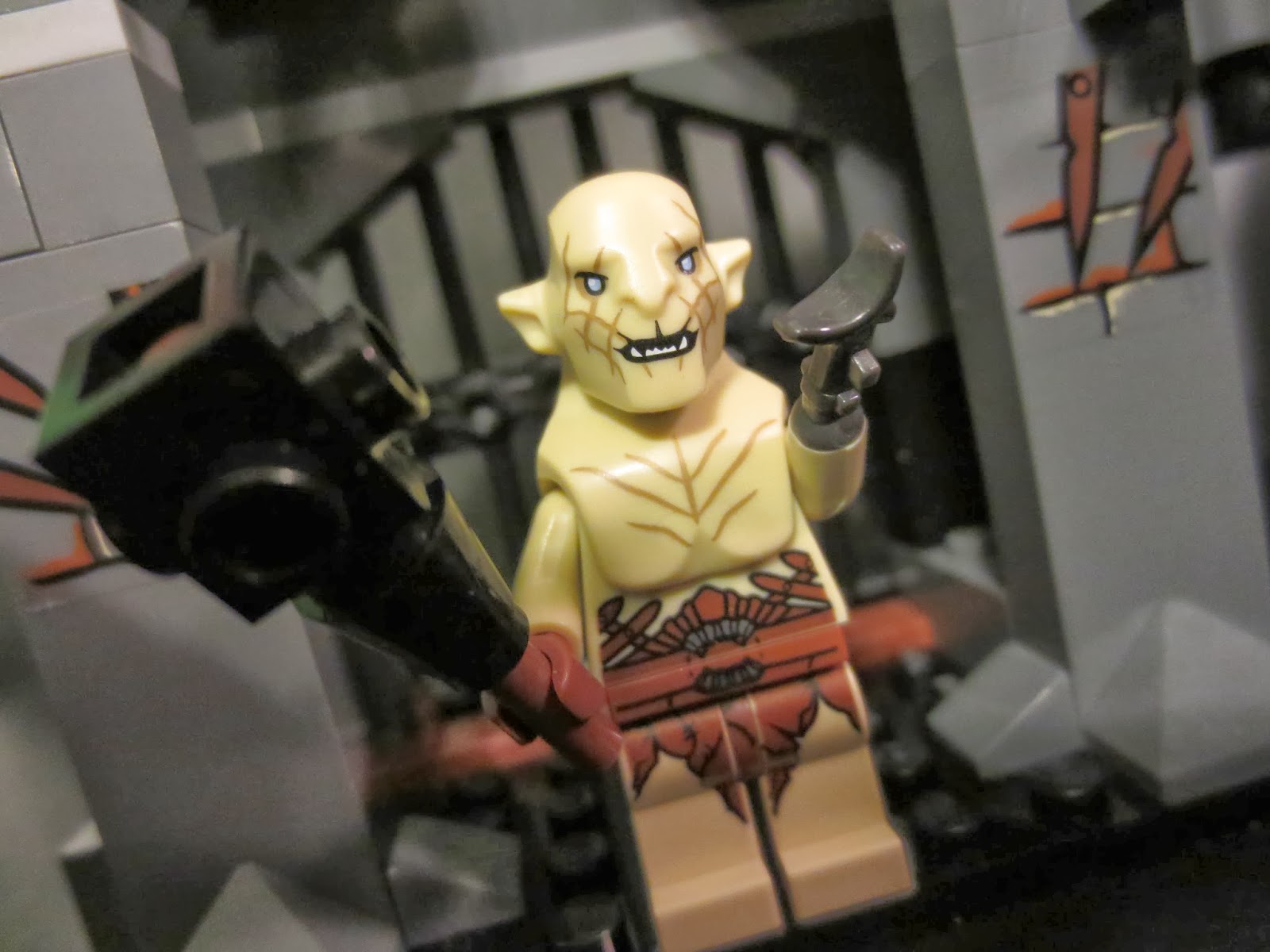 Azog is a pretty nice minifigure, too, and one lots of fans are going to want to get their hands on. He was originally offered as a random give away at SDCC 2013 and prices on him skyrocketed. It's really fortunate that Lego decided to include him here, as some other companies might suggest that re-releasing him would make him less special. He's really cool. He features back printing and has a unique head and chest to replicate the character's massive and intimidating appearance. His left hand is a really cool hook (not the same old pirate hook we've seen before) and he wields a wicked mace composed of various bricks. 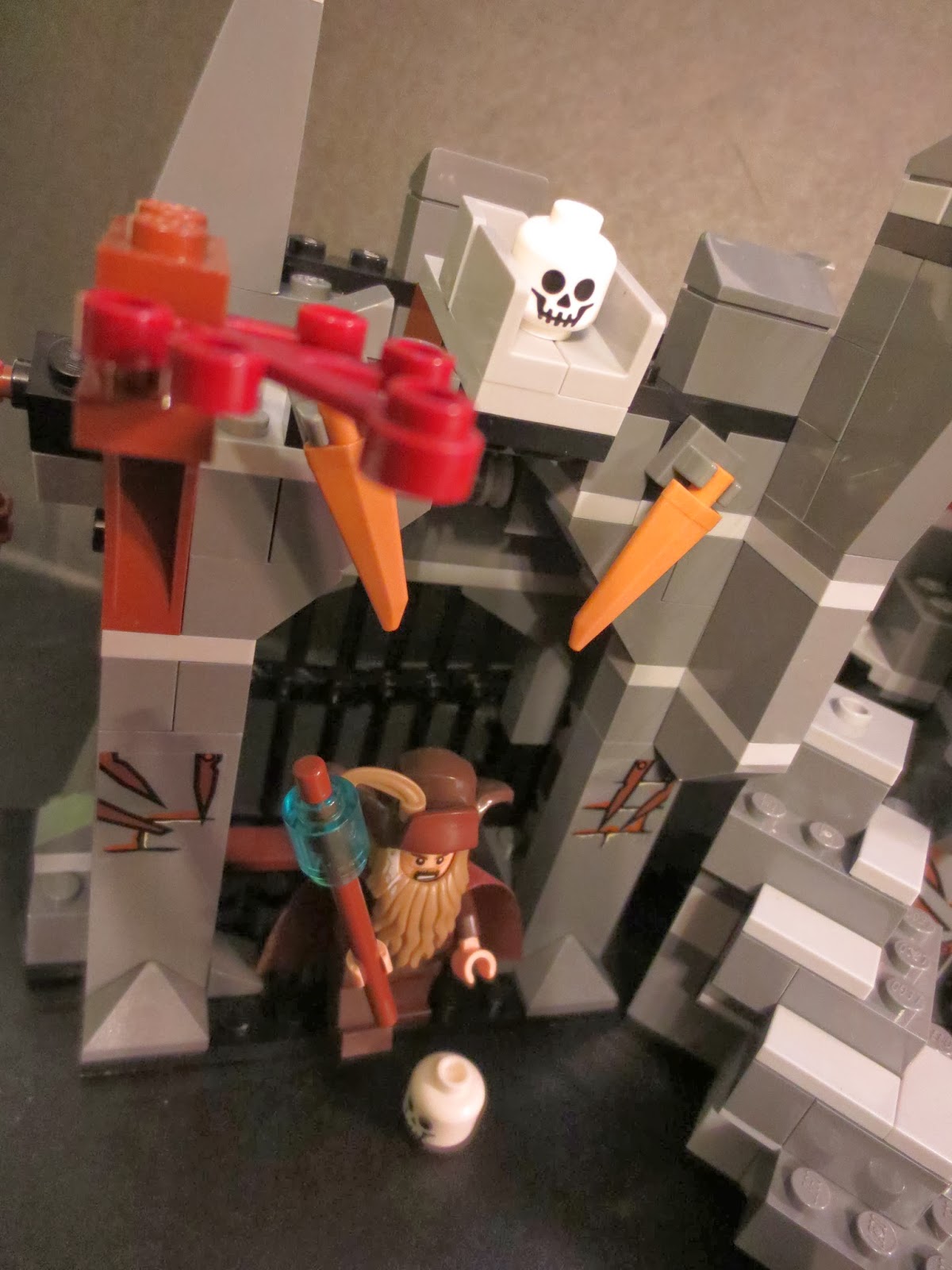 The main gate is about the same size as the "magical wall" section but appears to have an old tree and some vines growing out from between it's stones. The double iron doors swing open, allowing figures entrance into Dol Guldur. It's not easy entrance, however: rotating one of the vines growing out of the wall tilts a basket that you can fill with skulls, dumping them on the unsuspecting heads of intruders. Two skulls come with the set. 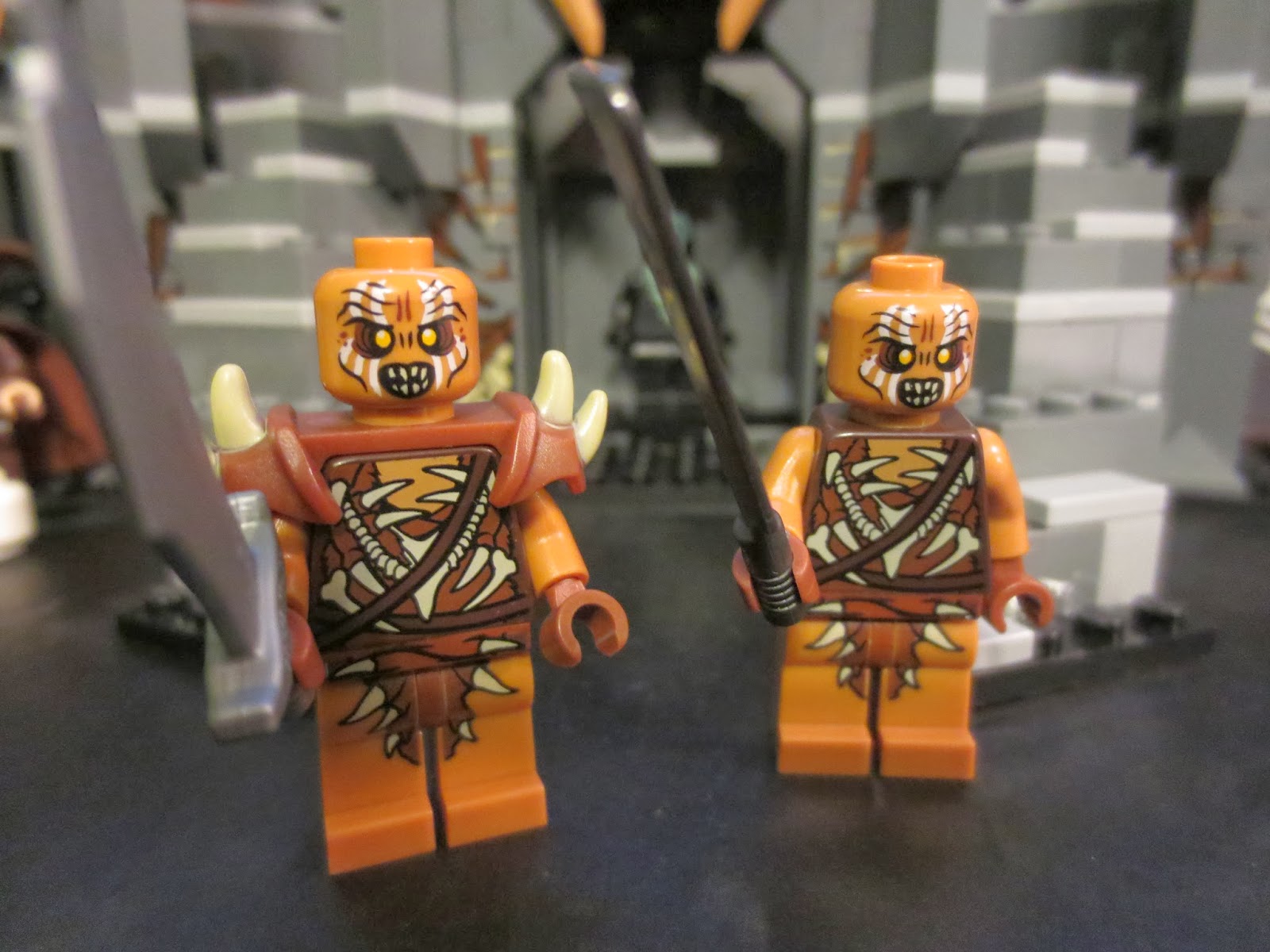 If you buy a few Hobbit or Lord of the Rings sets you'll realize that you're starting to amass a nice little army of orcs. Two Gundabad orcs are included with the set. They're both pretty similar, although one wields the Uruk Hai scimitar while the other carries a larger, curved sword and has spiked shoulder pads. 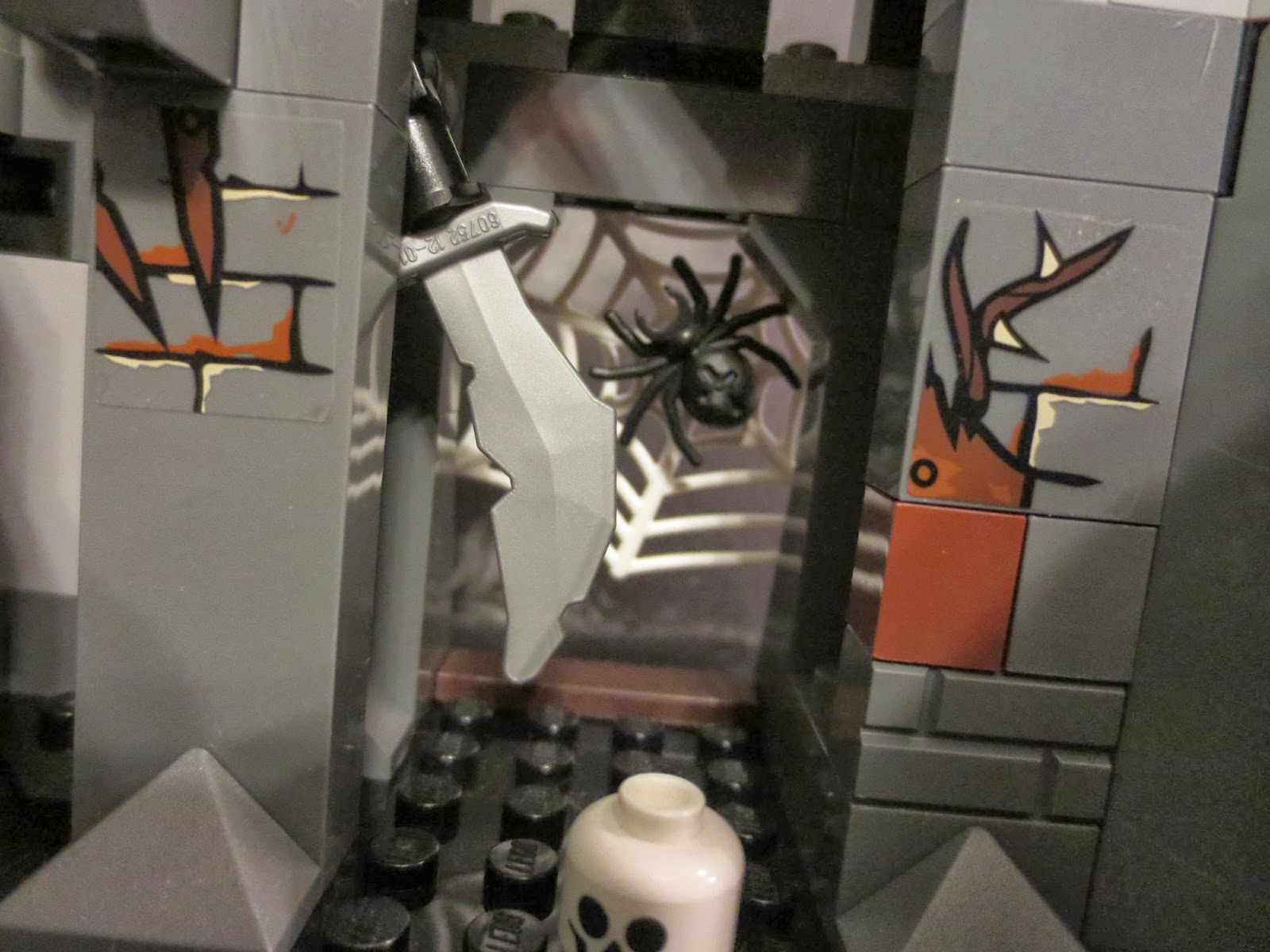 There's a third module that allows entrance heroes to sneak into Dol Guldur, that is if they can get through a pretty sizable spider web. Oh, and inside the passageway? Turning a lever causes a large sword to swing out of the wall and sweep up at anyone in it's way. There's a skull setting on the ground, so apparently the trap is pretty effective. I love stuff like this! 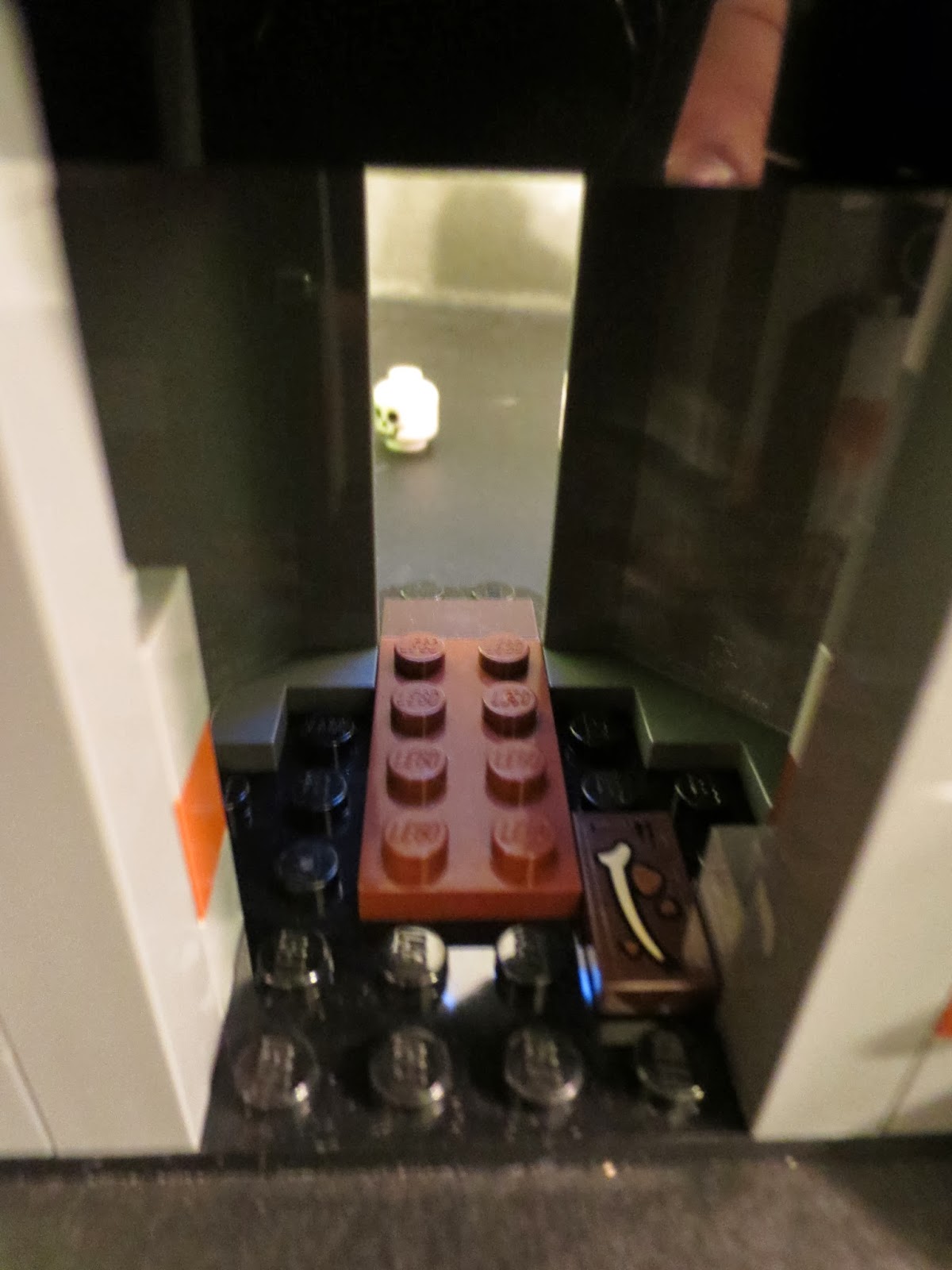 The tower might be the most interesting part of the build. The bottom floor is pretty simple- it's just an empty room with a 1x2 tile bearing a bone sticker. 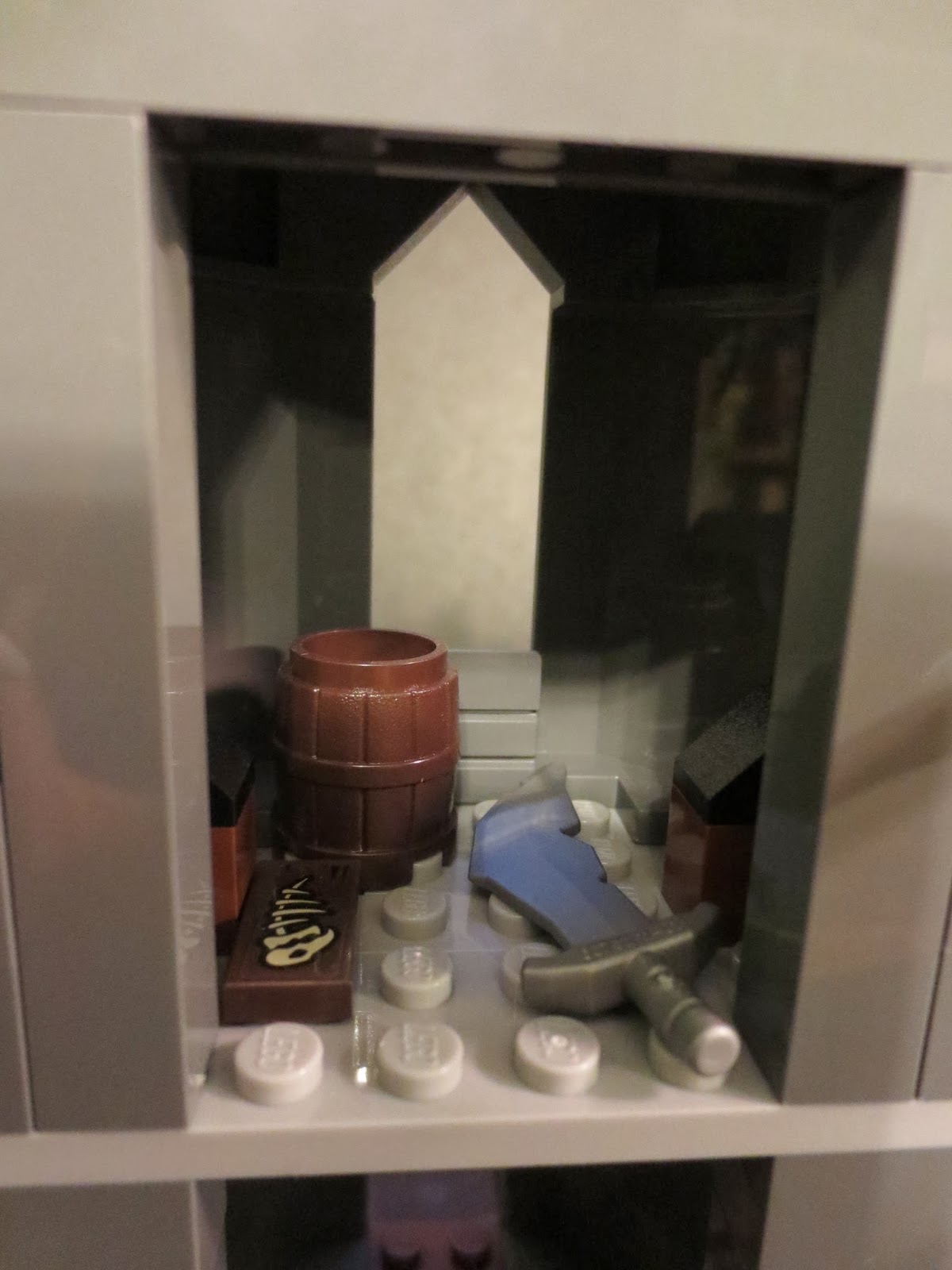 The second floor is smaller, but has a barrel, a large sword, and a fish bone. Maybe Gollum's been up here? 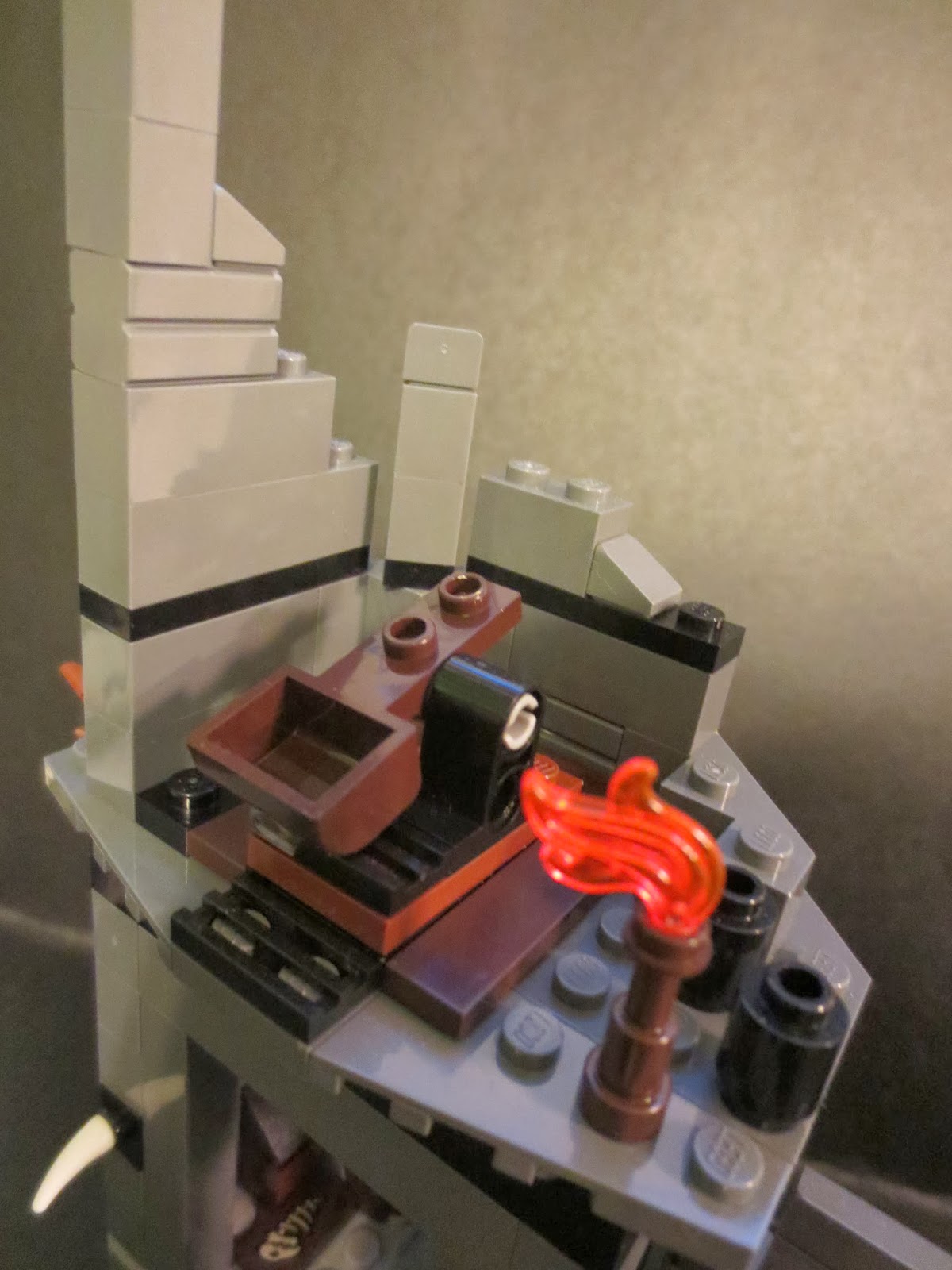 The top of the tower is versatile as it can hold either a catapult or the hanging cage. The catapult is a simple contraption and comes stocked with two cylinders to launch from it and a torch. 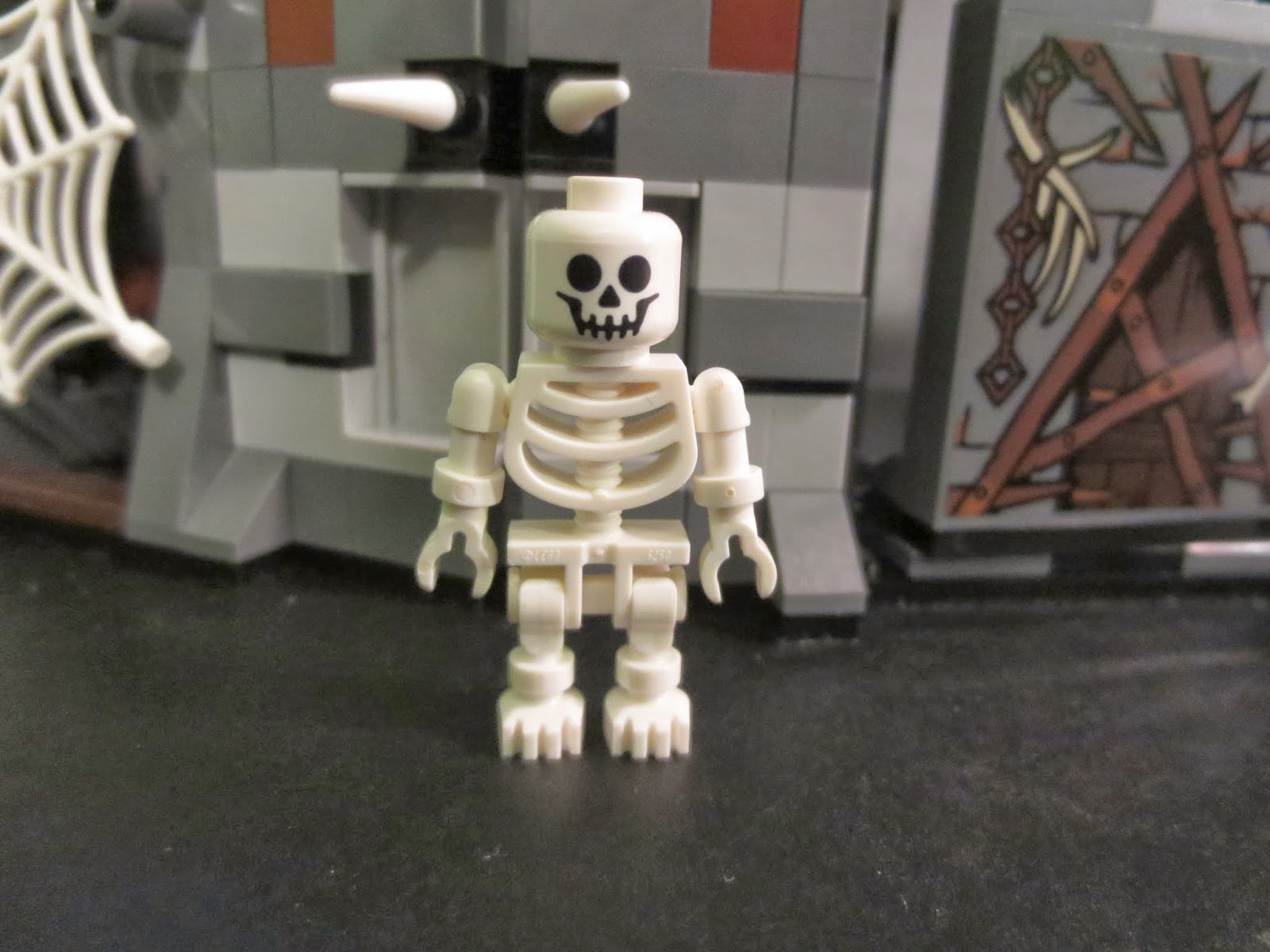 The skeleton is the same basic Lego skeleton that we've seen for years. I always want more of them! 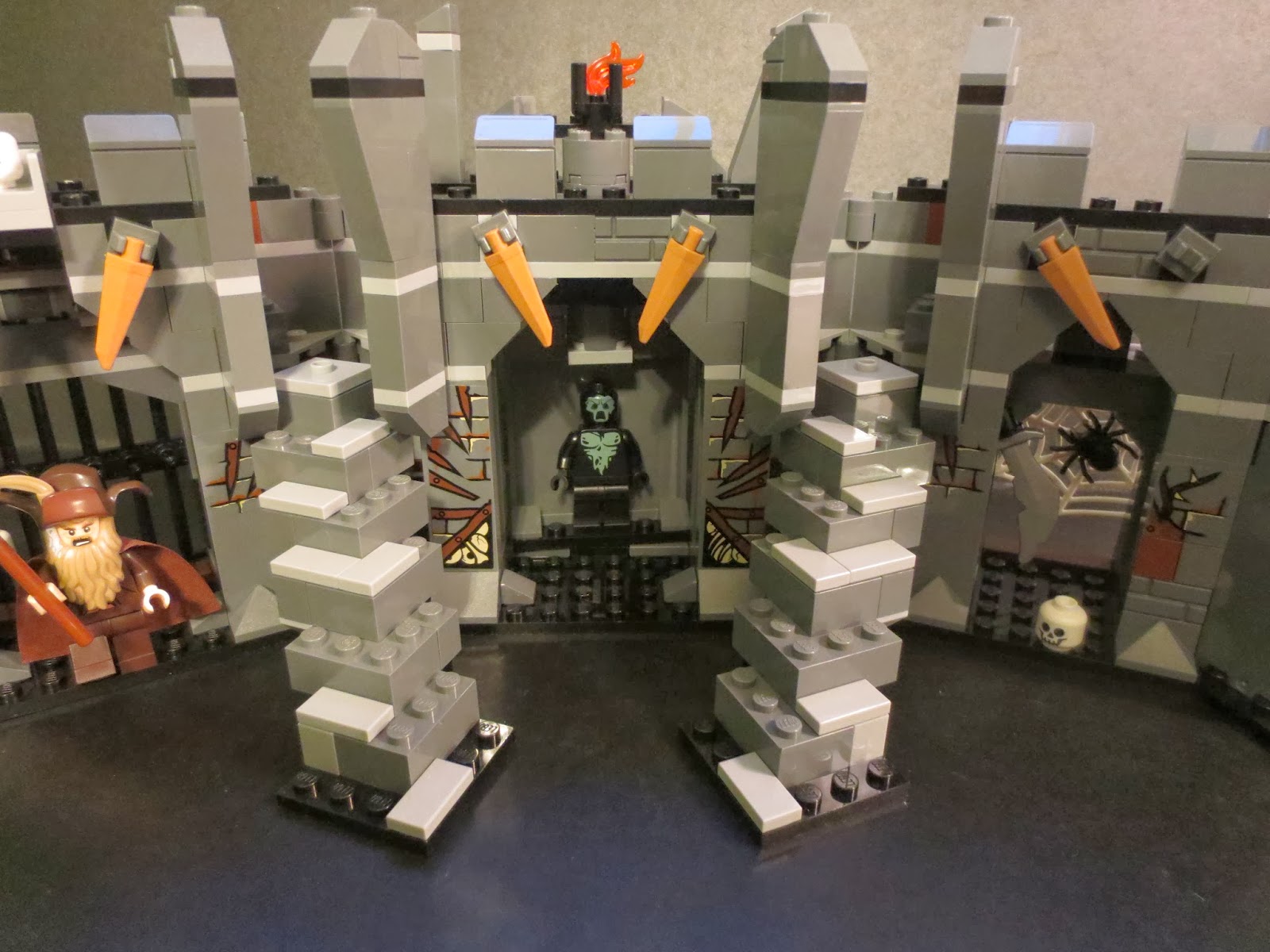 These stairs heading up to the walkway above the fortress are quite neat. I really like their symmetrical design and how they're build at an angle. 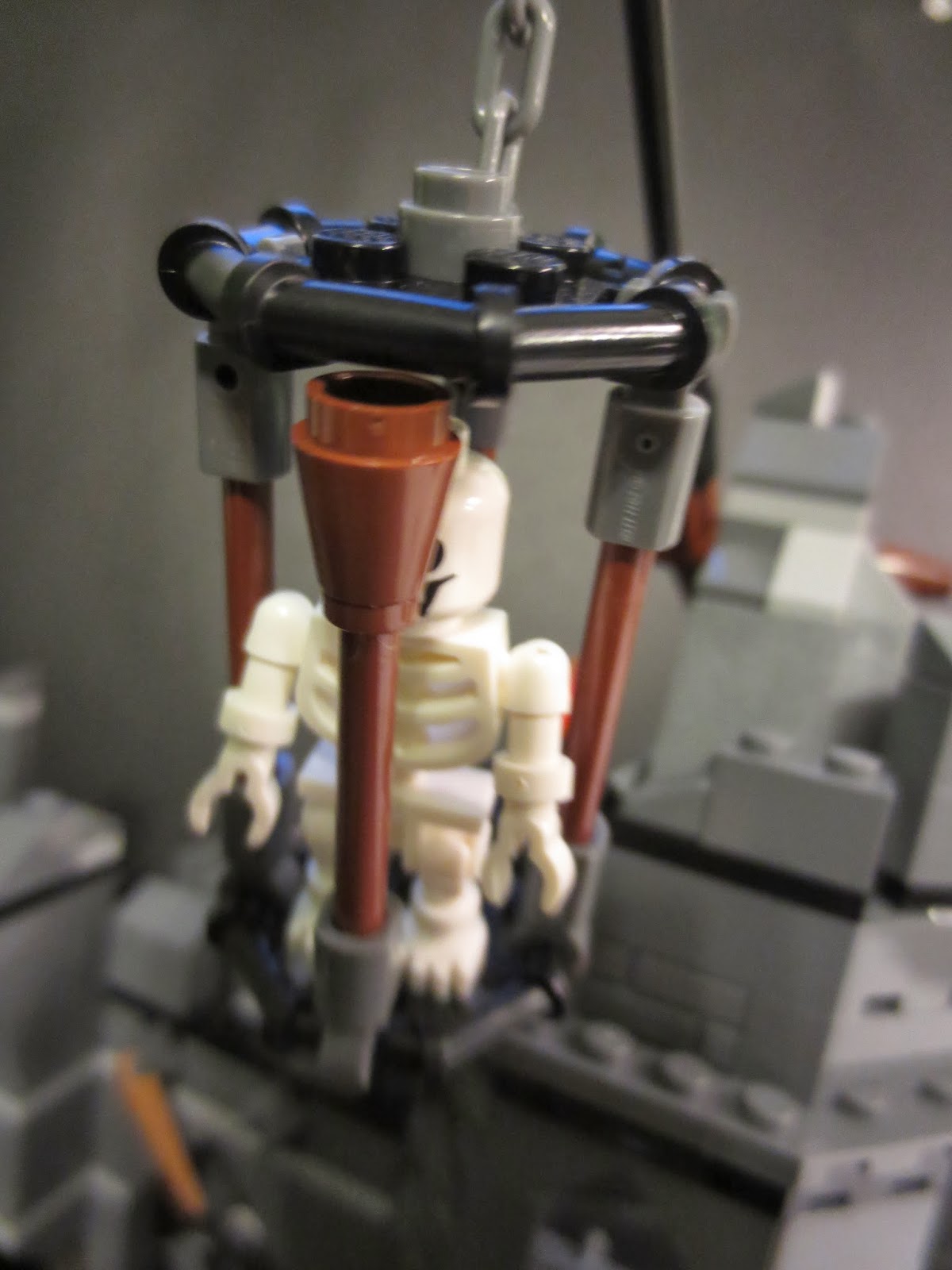 The hanging cage is a fun element. It can be dropped by pushing a lever but looks fantastic just sitting out somewhere or sitting atop the tower. One of the bars folds up to allow the skeleton (or anyone else) to be placed inside. 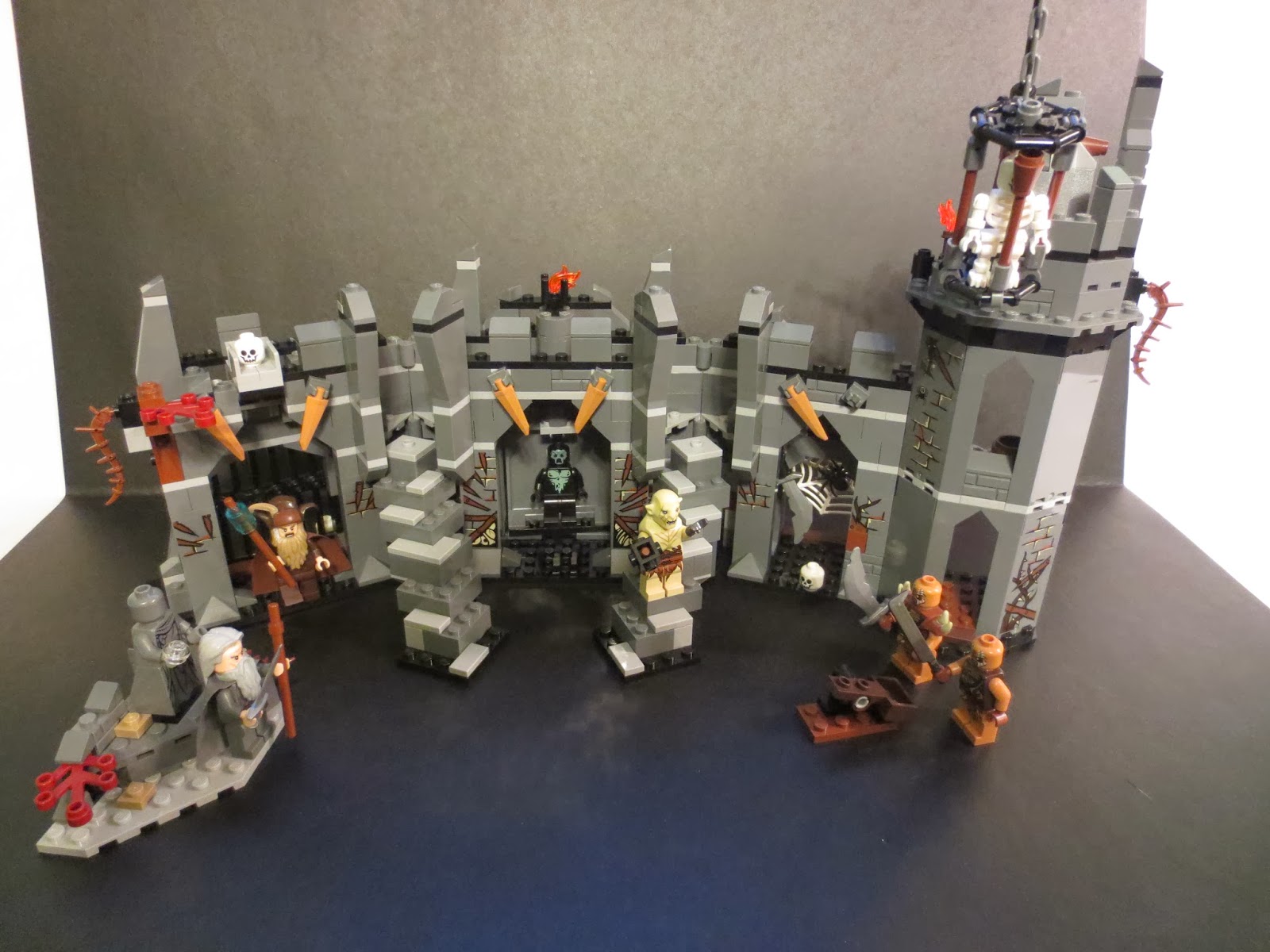 I like the Dol Guldur set, but have to admit that it is a bit underwhelming. It's just...odd. It's one long wall without much space for figures on the build itself. I really wish it were built a bit differently, perhaps smaller in length but taller in height. The build was pretty fun, but lots of things that could have been cool details were accomplished with stickers rather than bricks or printed elements. That's a bummer. The minifigures, other than the Necromancer, are all top notch. Overall, I'm giving the set a Good and a 1/2. It's definitely not the best Hobbit set released, but it's a fun distraction, particularly if you have uses for some of the other elements. Oh and one of the other cool features? The set attaches to the Dol Guldur Ambush set. The smaller set attaches onto the other side of the tower. It's cool. Not life changing or anything, but cool.