Lego Review: Pirate Ship Ambush from Lord of the Rings by Lego 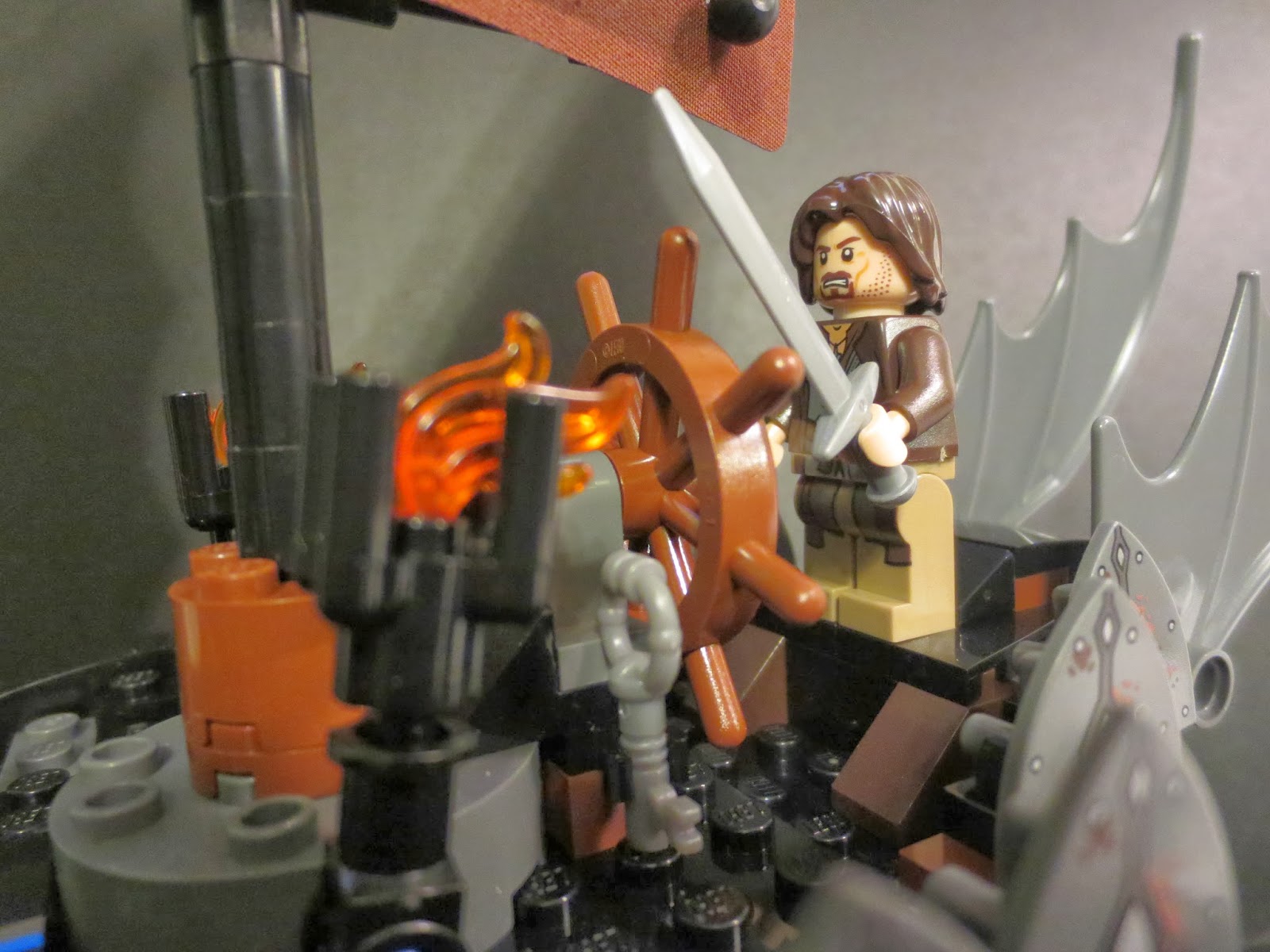 I think Lord of the Rings has been one of the coolest licenses that Lego has picked up in years. I really hope they continue to release new product for it this year. I know we'll get a few more Hobbit sets (and hopefully one with a Lego Smaug) but I really want some more from Lord of the Rings, too. One of the most surprising sets to be released in 2013 was the Pirate Ship Ambush. It's a pretty minor scene in The Return of the King, but a neat one that created a great toy. While I love The Lord of the Rings, it was actually the fact that this is a pirate ship with ghosts that interested me in the set: since my whole Lego display is a giant haunted world, a ghost ship will look great in my harbor! ready for a look at a set that just might shiver your timbers? Then read on, after the break.... 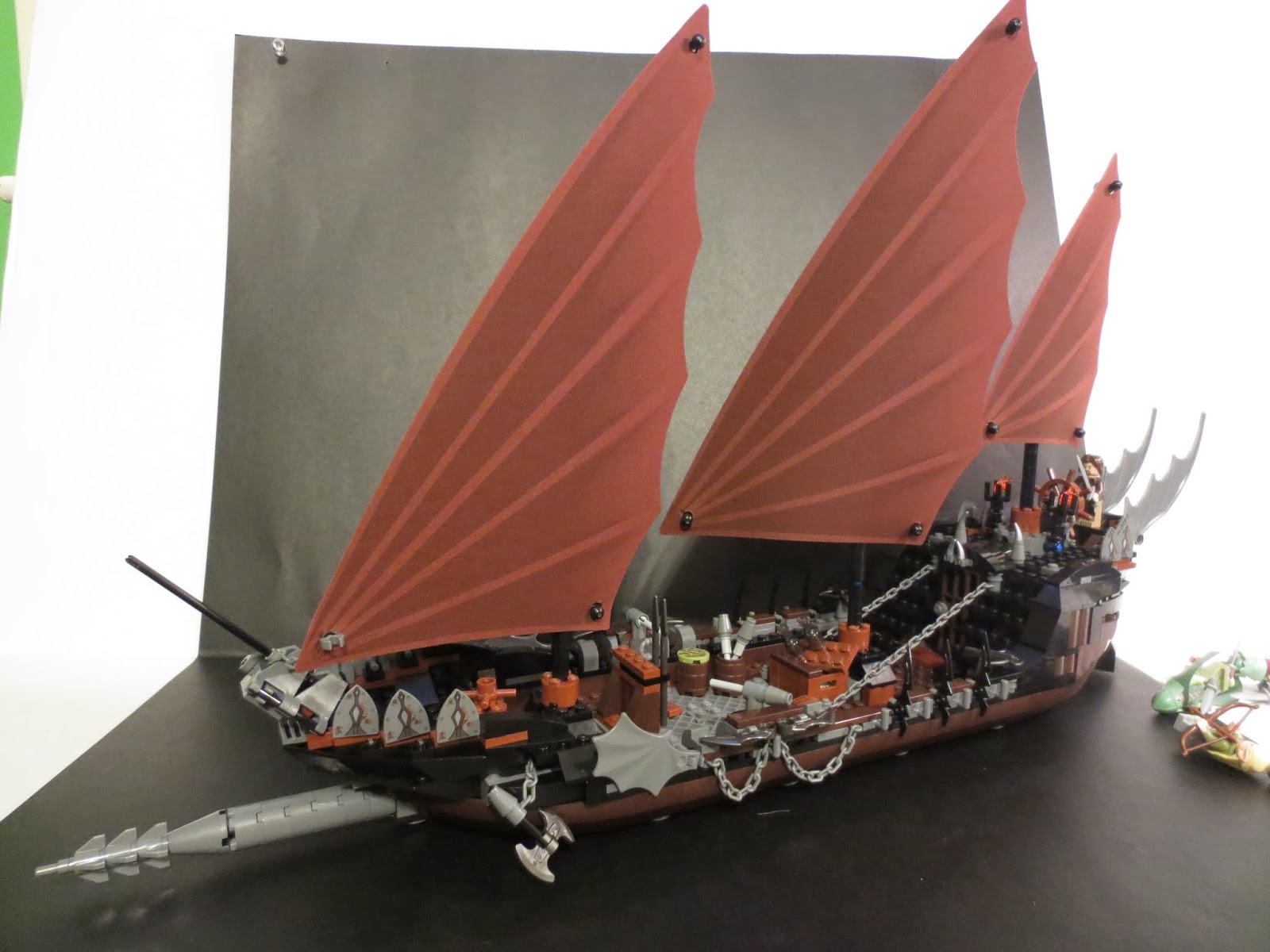 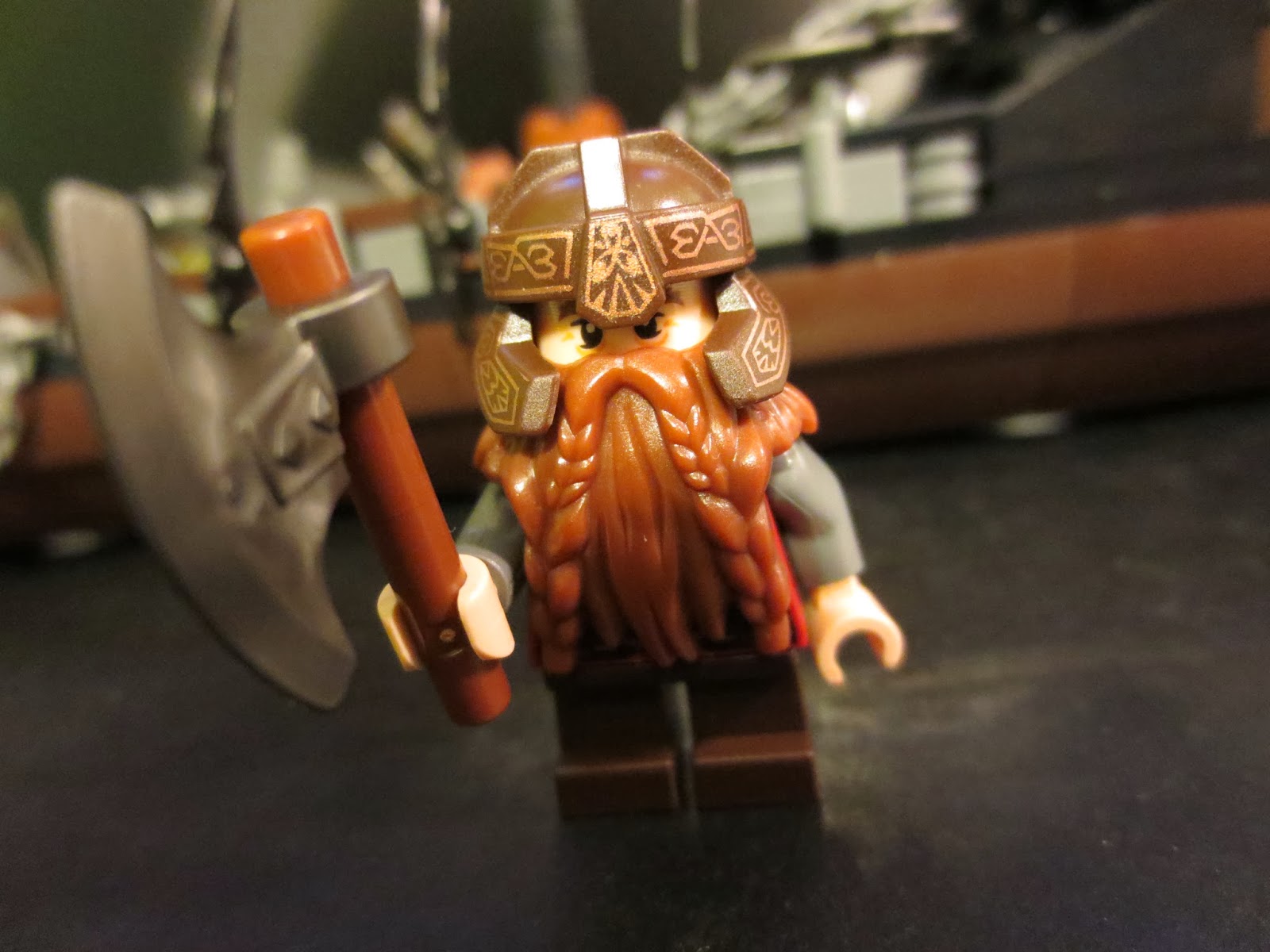 One of the problems I had with this set is that the main three minifigures (Aragorn, Legolas, and Gimli) are no different than in previous releases. I have multiples of a few of these characters at this point. Still, they're well done minis. Gimli has a well done torso, even if it's completely obscured by his unique beard. The helmet's also beautiful with gold paint around the edges. An an extra axe? Always a plus! 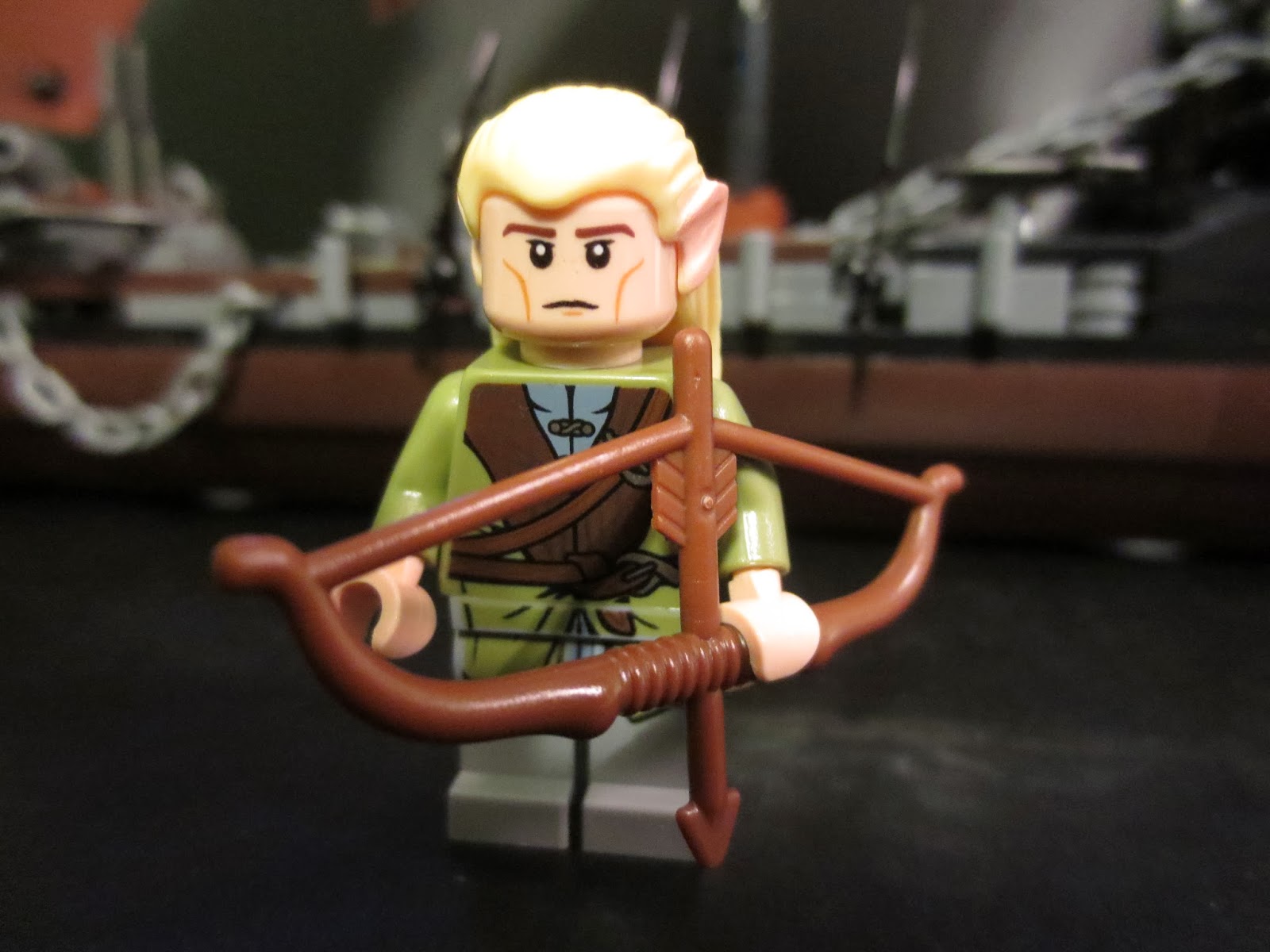 I can find less to do with excess Legolas figures, though I understand for a set this large Lego wanted to make sure that kiddies could get the main guys they wanted. Nice printing, two faces, and a unique Elvish hairpiece creates a pretty cool figure. I wish he had a different bow, though. Something more like the Elvish bow Galadriel gave him would be neat. 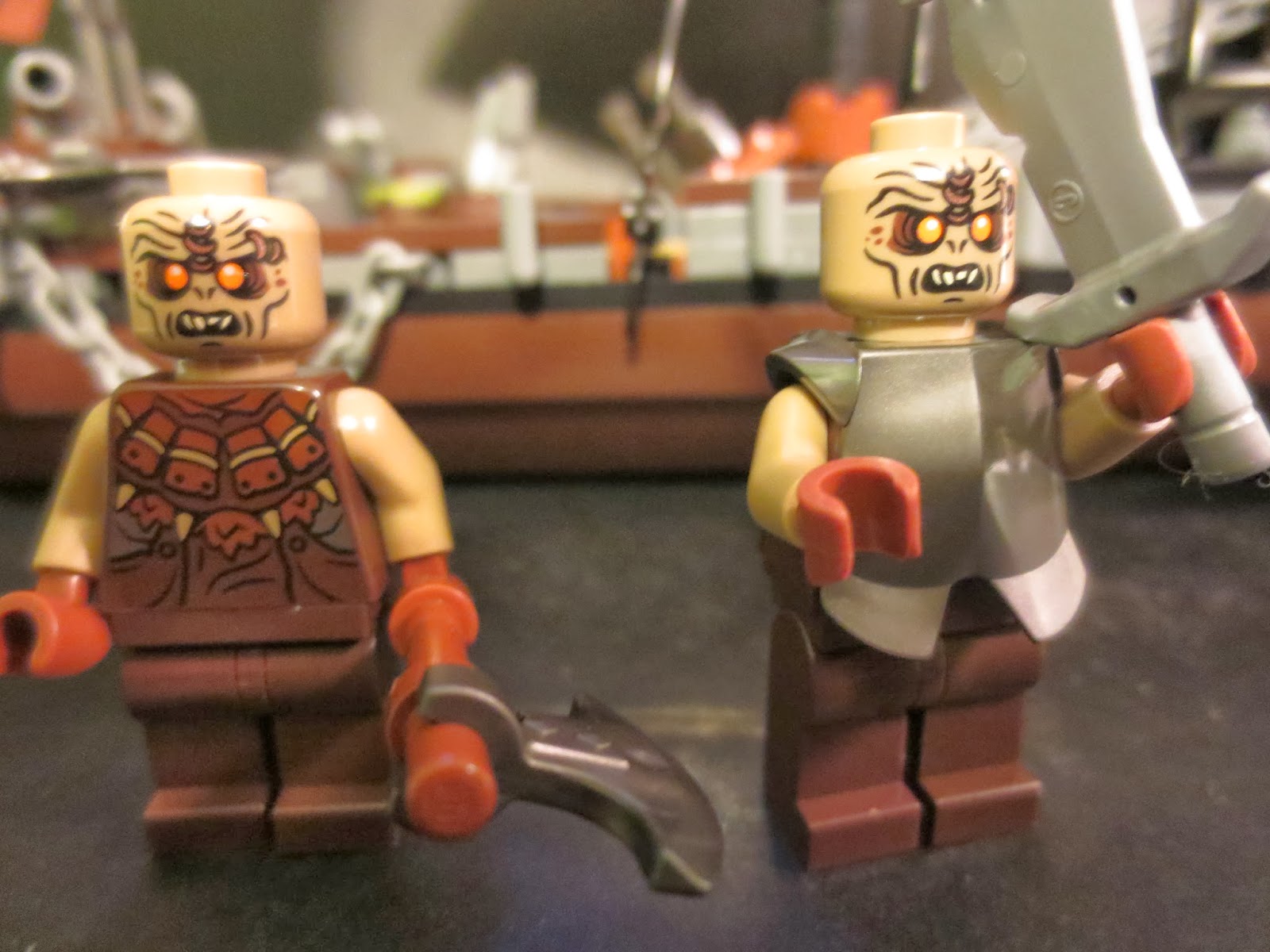 The orcs are both the same minifigure, but one has armor and a sword while the other wields an axe. More orcs are never a problem. I like the printing these guys have on their heads, especially the piercings between their eyes. 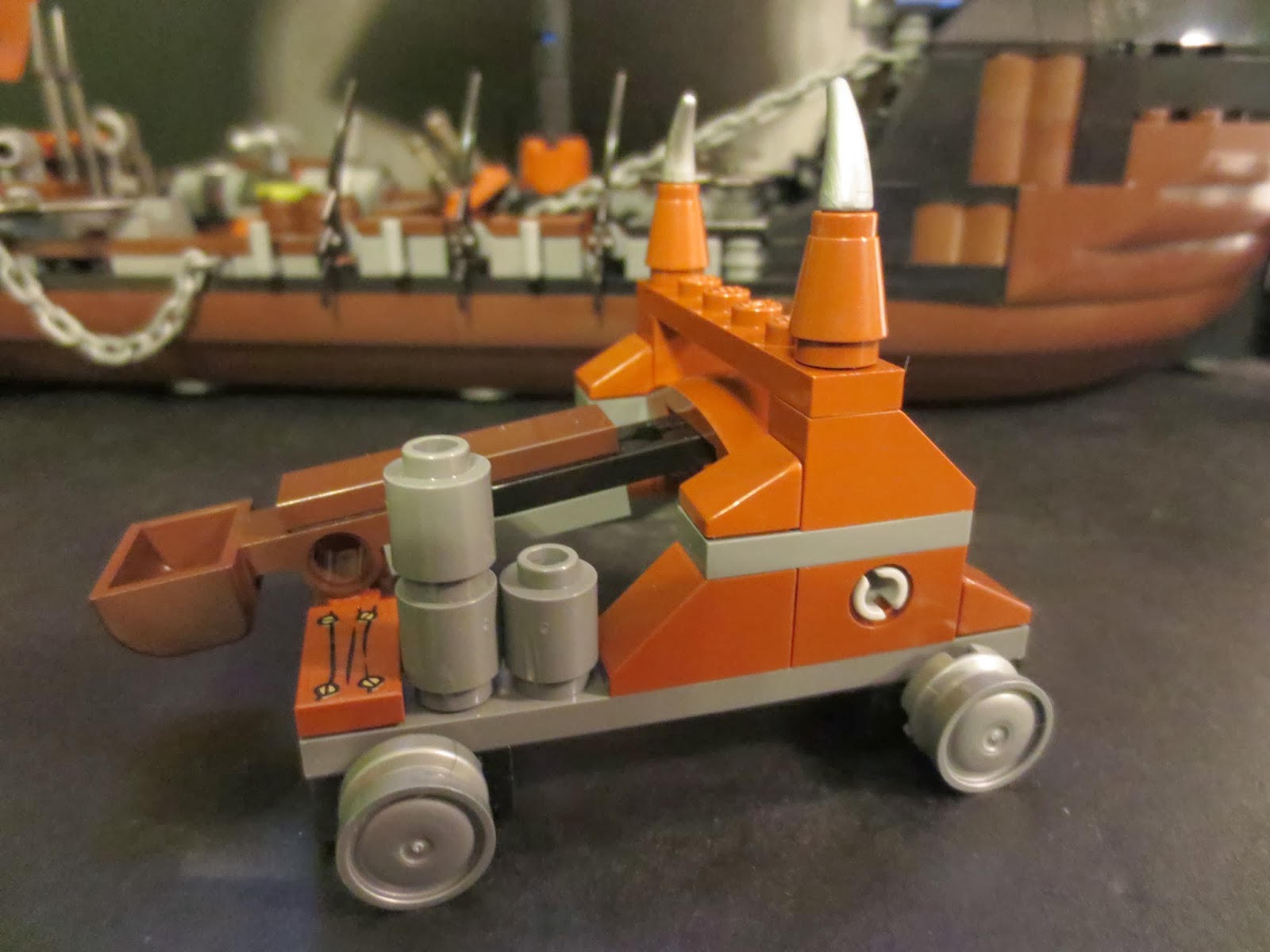 The catapult included with this set is pretty awesome. It's probably one of my favorite Lego catapults ever due to it's wheels, powerful throw, and the stickers that give an authentic wood-like appearance to some of the pieces. 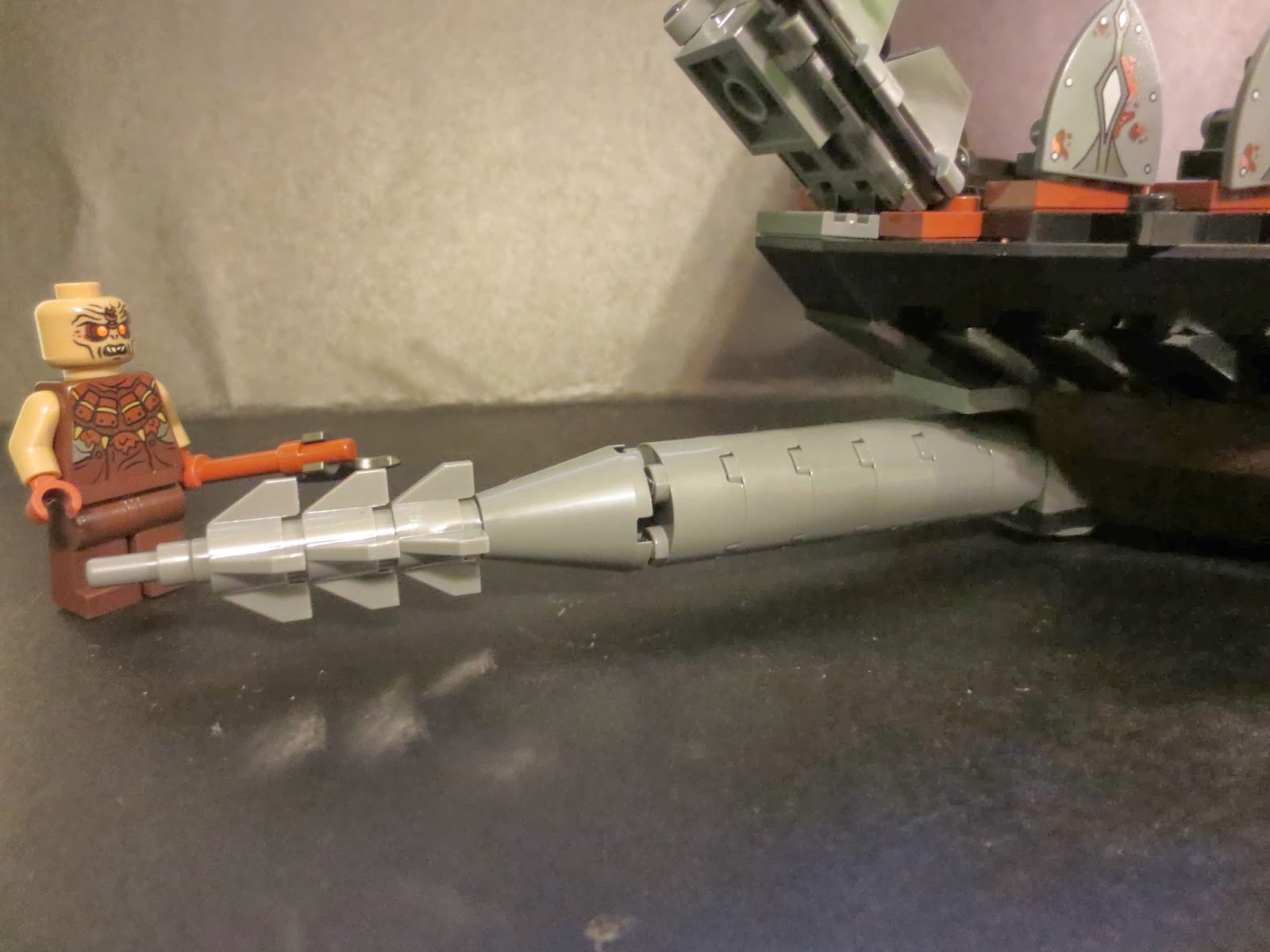 I've spent quite a bit of time on Google trying to figure out what this thing is called. It's not the bowsprit. Maybe it's used for ramming other ships? Anyways, it's wicked cool looking. 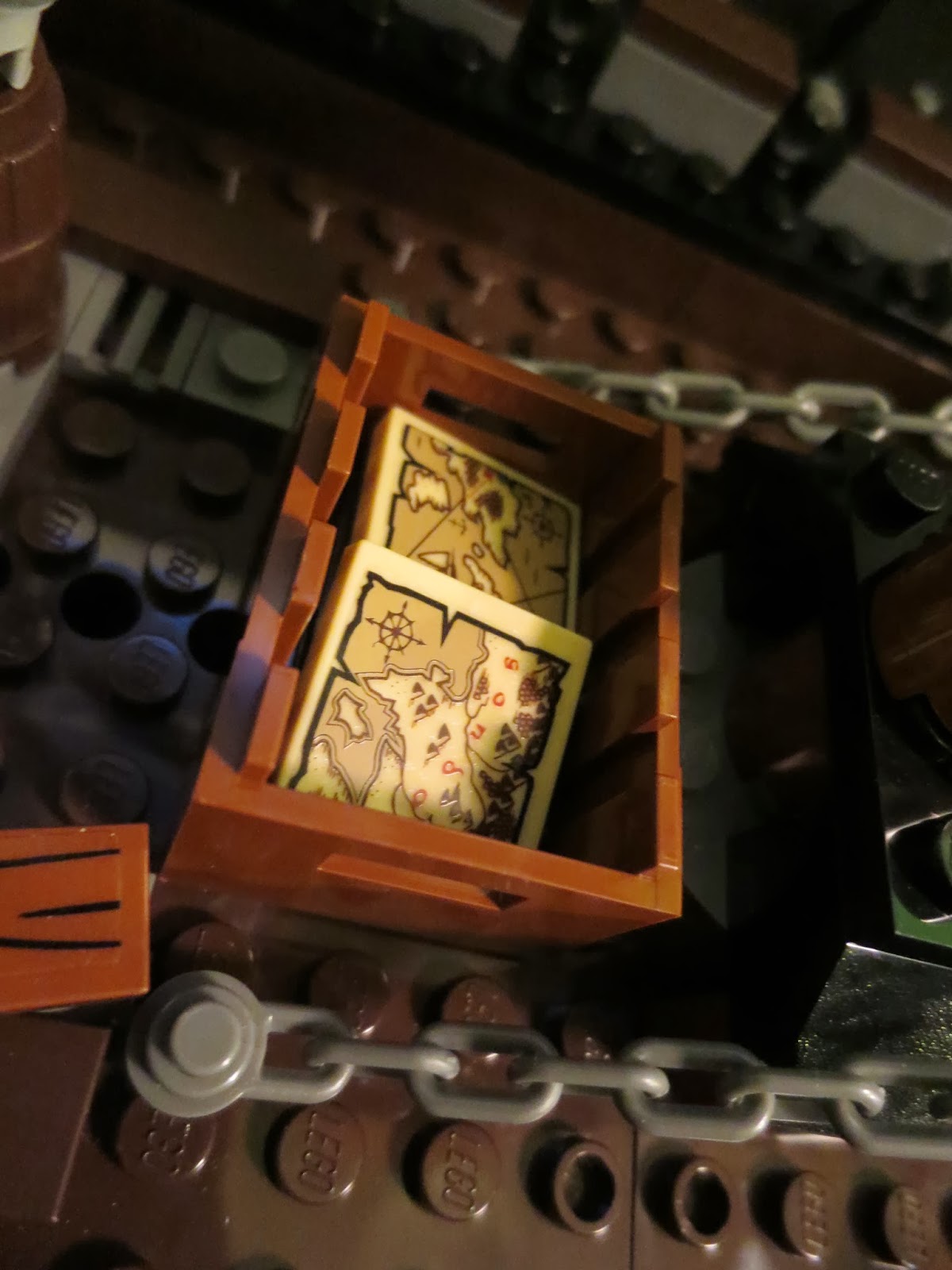 In the middle of the ship is a chest that stores two maps. The maps look great although they're not printed but simply stickers. The chest lid is kind of loose, though. 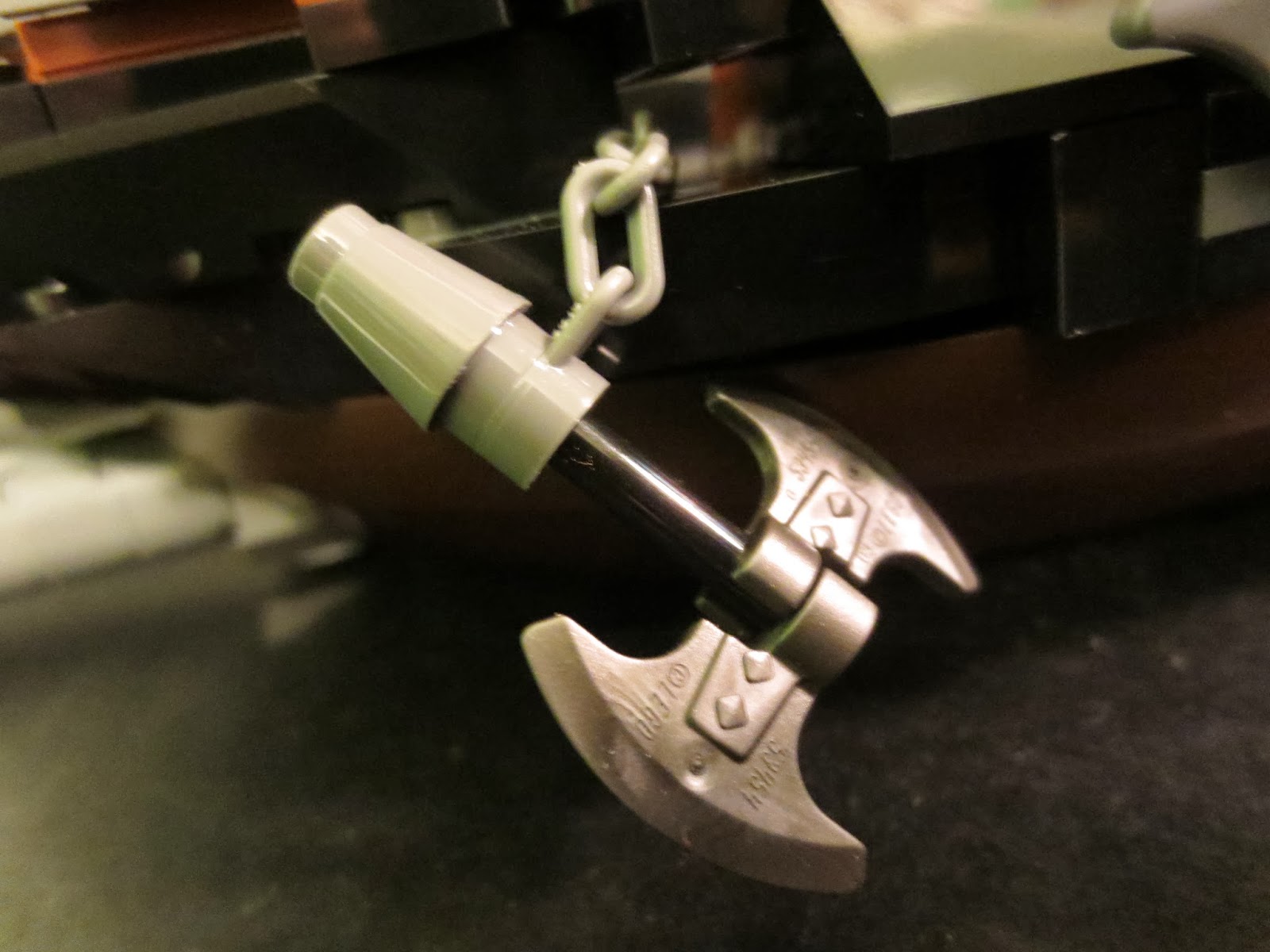 The dual anchors on both sides are also really brutal looking. I love how they're attached to chains which emerge from out of the ship. They can lowered and raised by turning a wheel at the front of the ship. 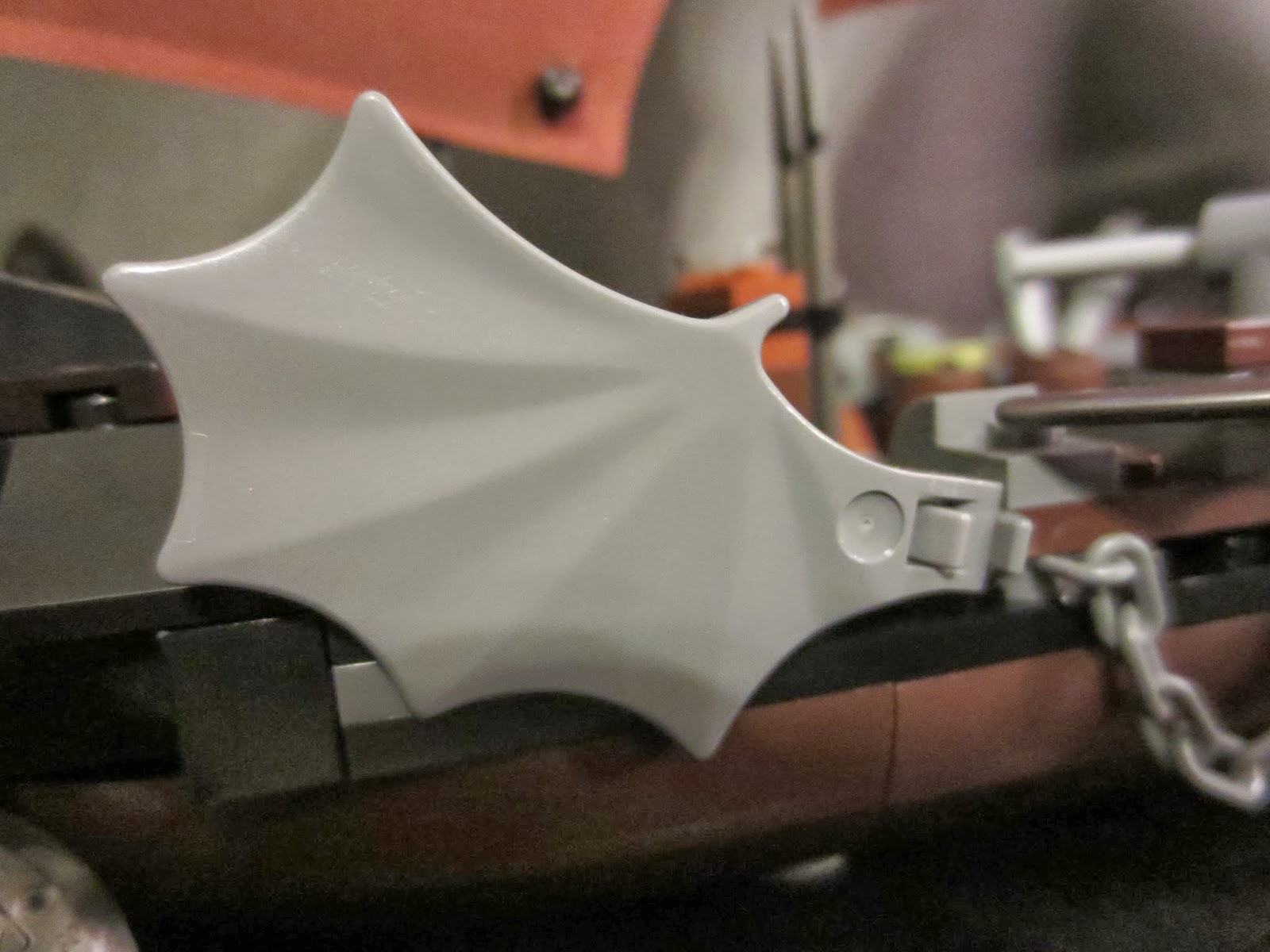 These wings are interesting. They're hinged so you can swing them out if you want. 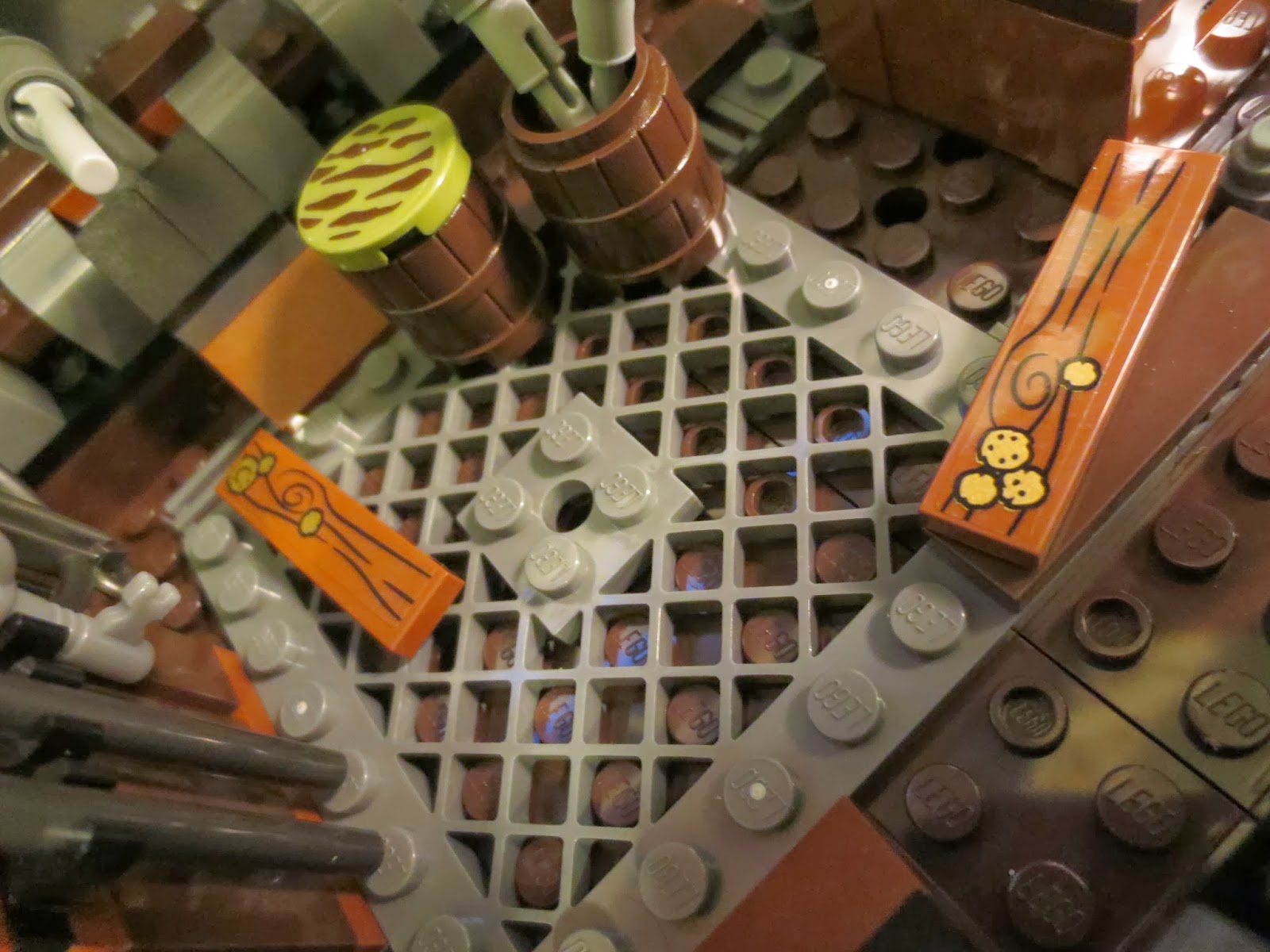 This looks like it goes down into the ship. It's not functional, but it has some neat tiles on it that gives it the appearance that it has been boarded up. 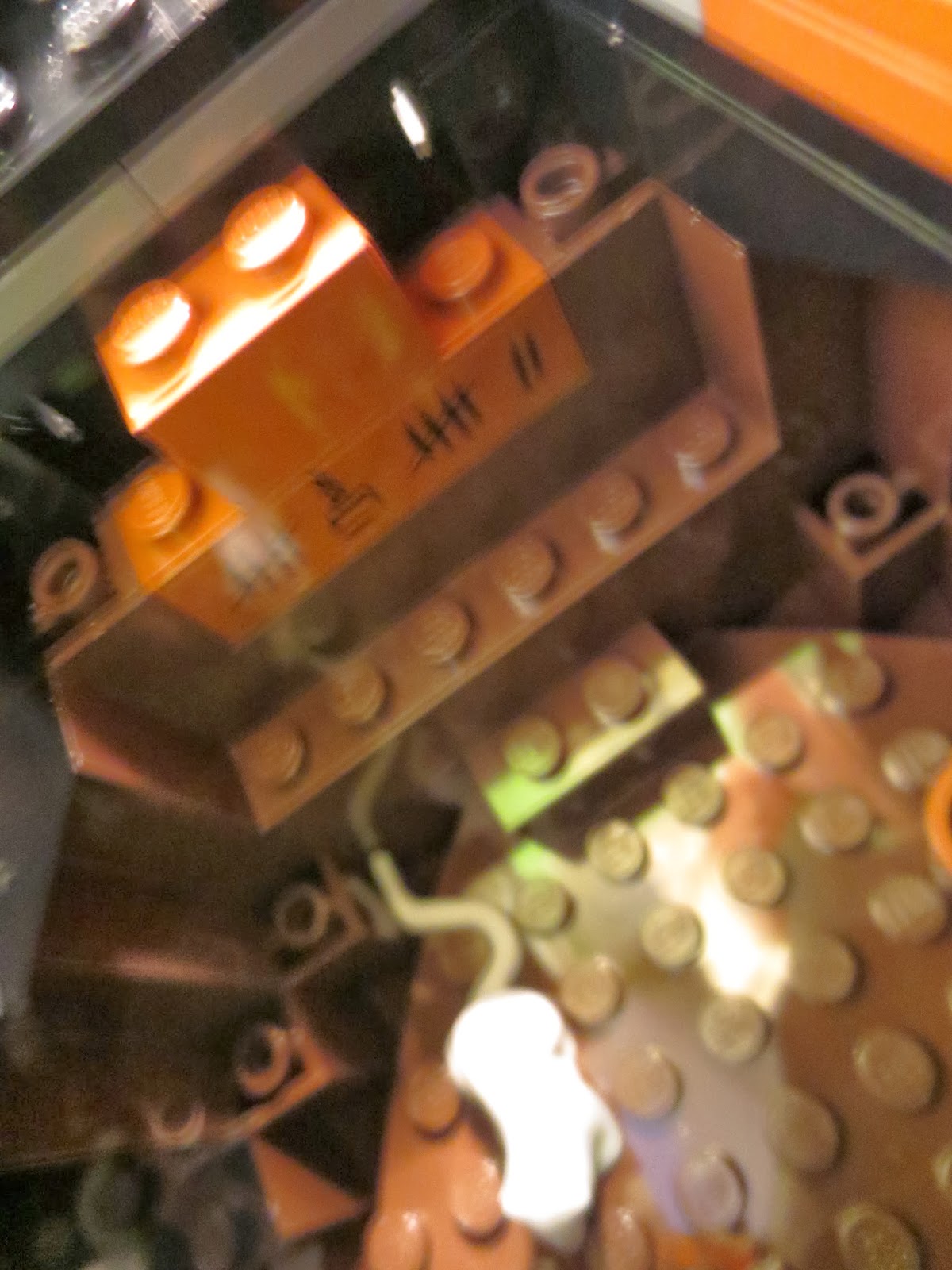 This is a hard detail to see, but inside the brig are some scratches on the walls as if someone has been counting the days they've been locked up.  There is also a mouse and a bucket inside the brig, as well as some torches. 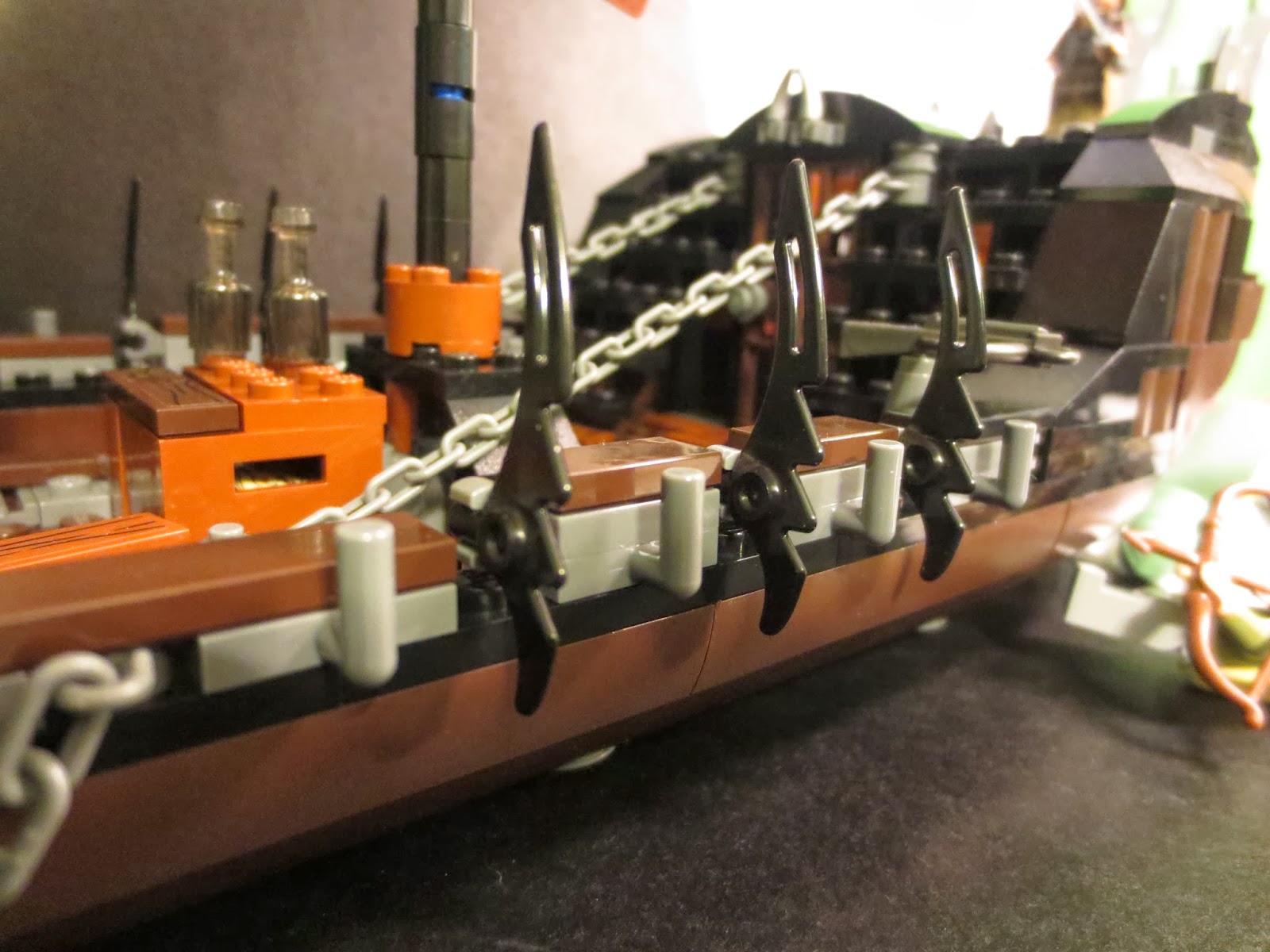 The blades on the sides of the ship not only look cool, but also seem like they'd be convenient in helping to fight off enemies trying to board. 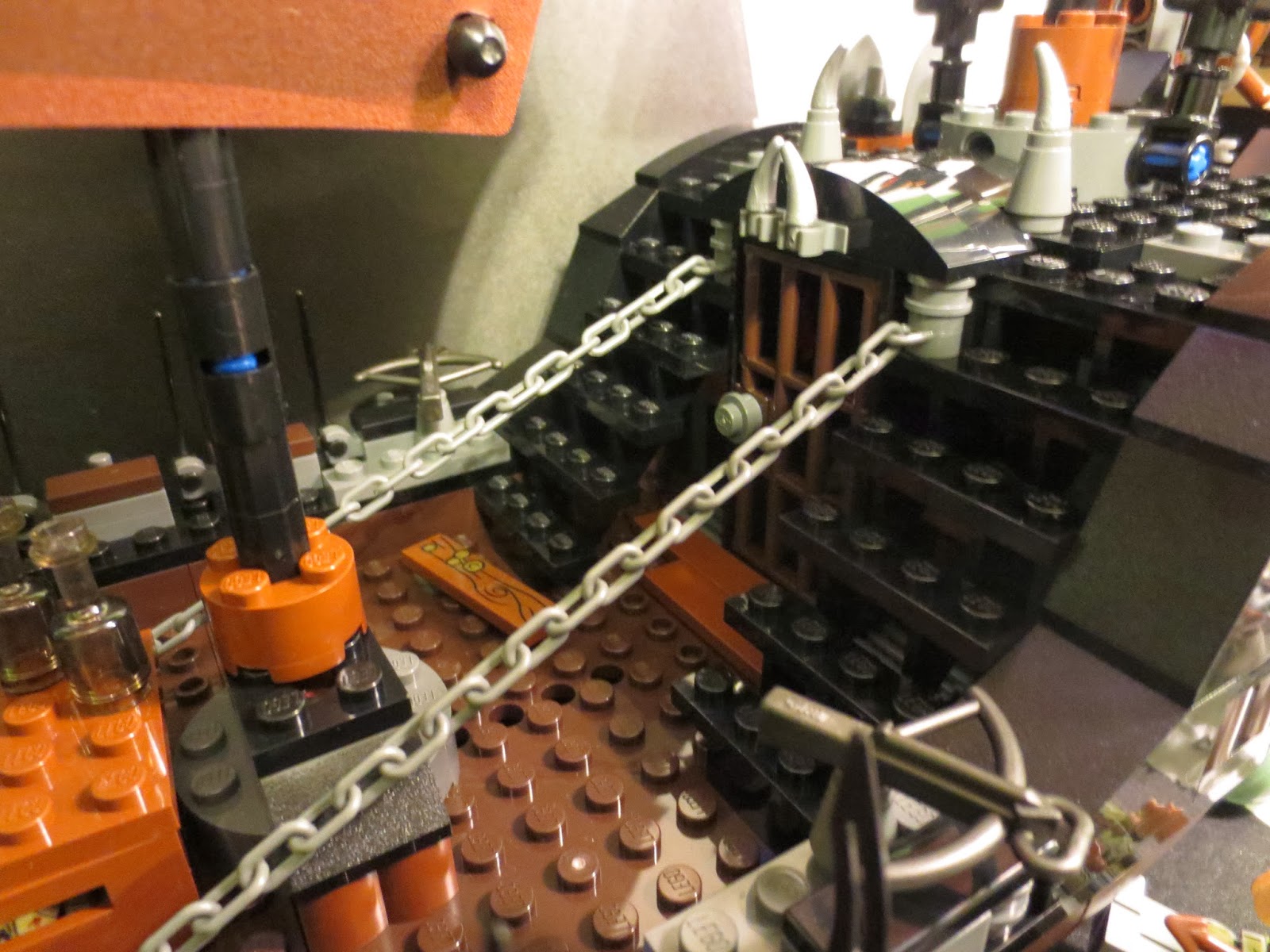 These steps leading up to the helm and accompanying chains really add to the complexity of the ship. Back behind the chains you can see the door that lets prisoners into the brig. 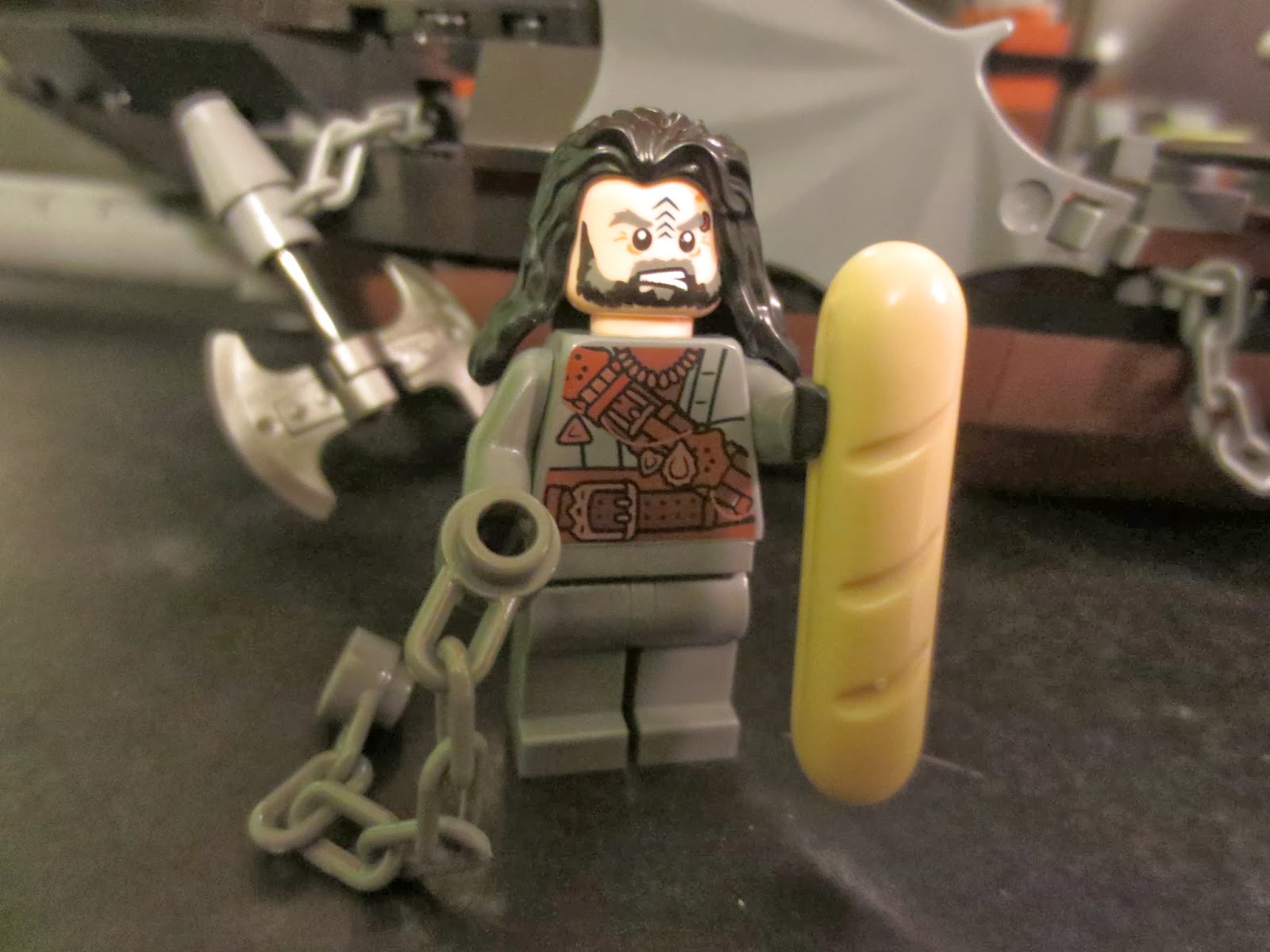 The pirate captain of Umbar (played in the film by Peter Jackson) is a cool mini. I love his bread and chain. 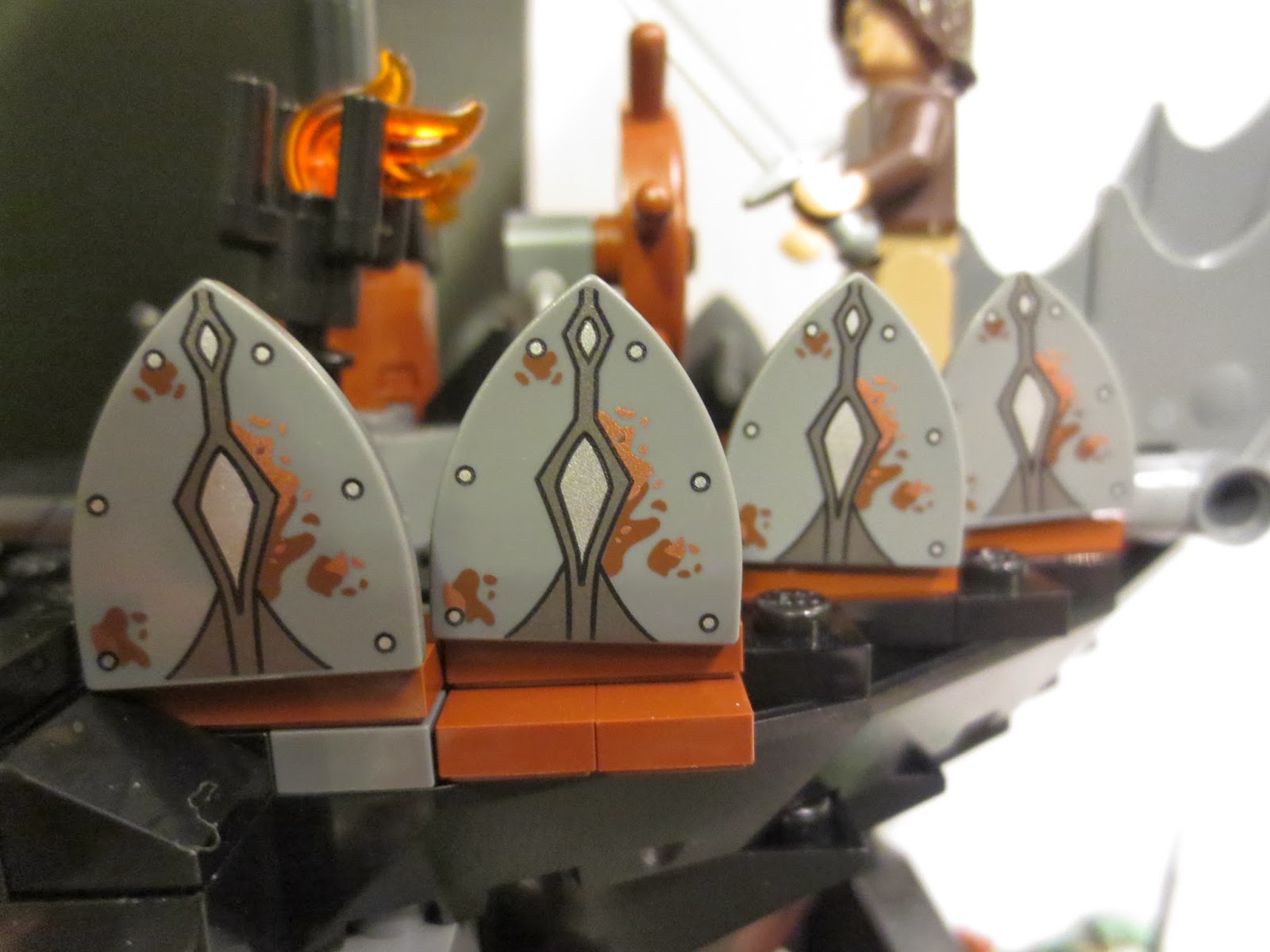 The shields on the sides of the ship really make a nice decorative element. 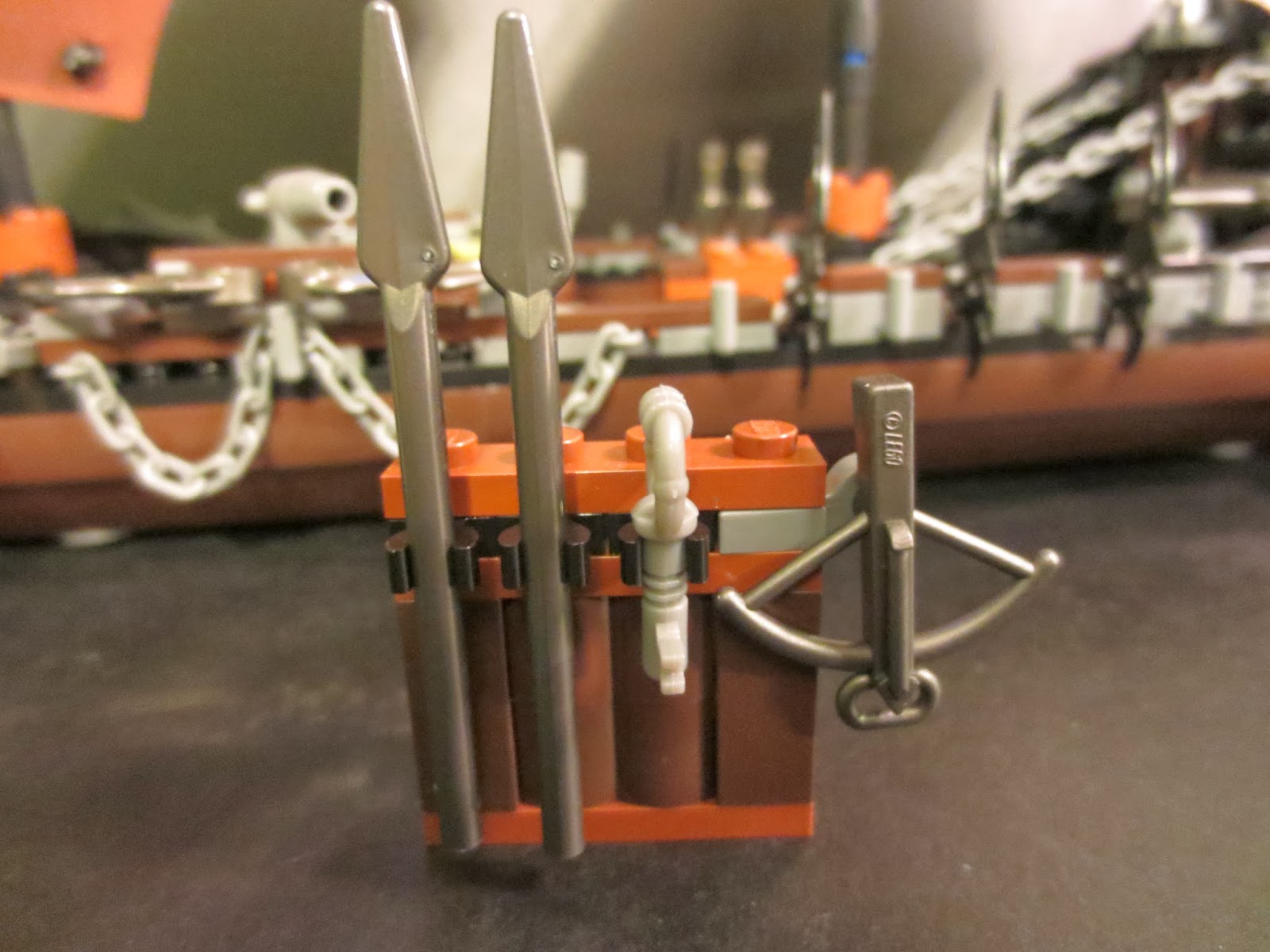 This weapons rack holds two spears, a key, and a crossbow. 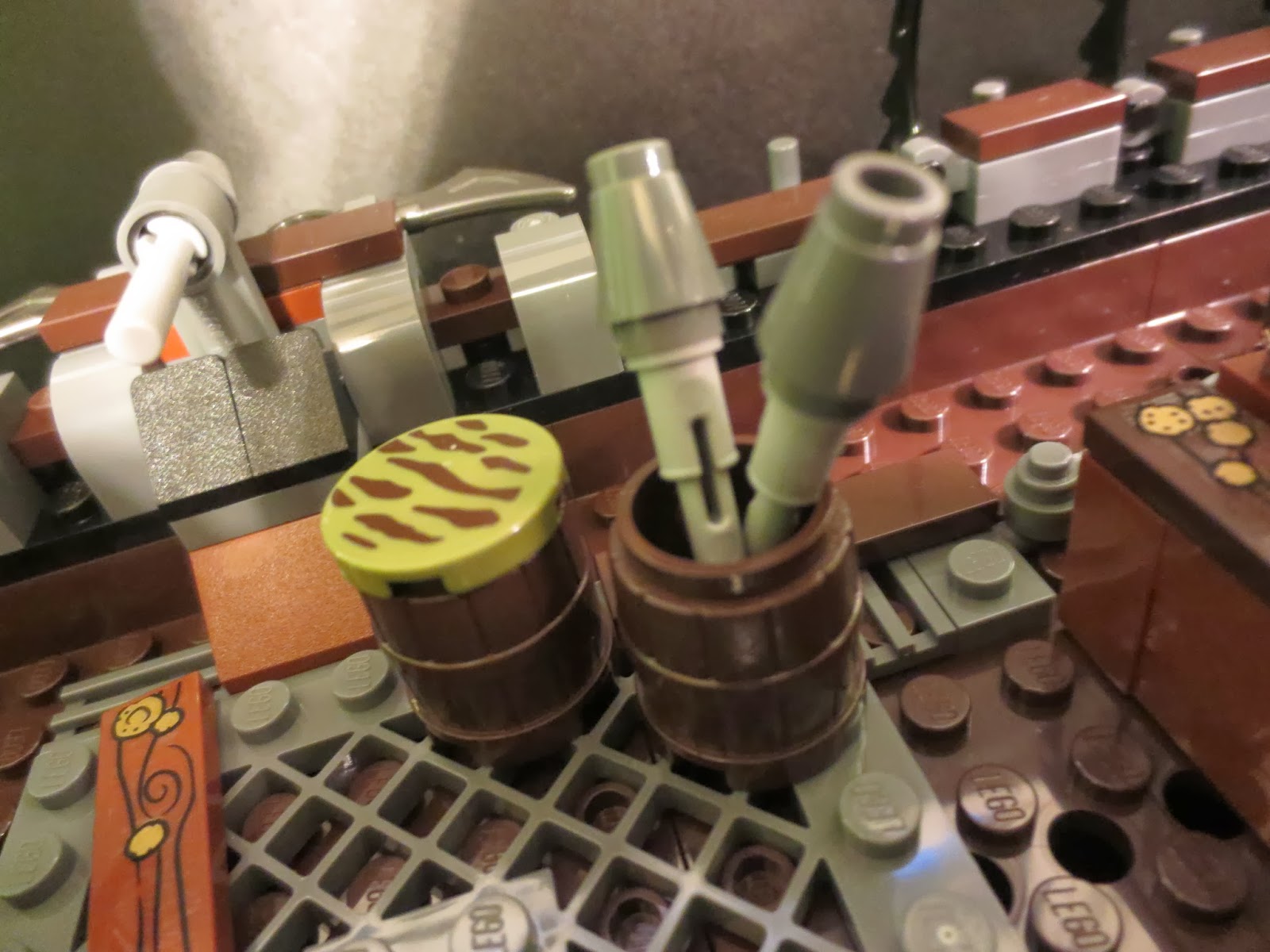 One of these barrels actually looks like a drum or a table. Inside there is a gold piece and a diamond. Also, it wouldn't be a modern Lego set without flick fire missiles. There is one launcher on each side and two extra missiles in one of the barrels. 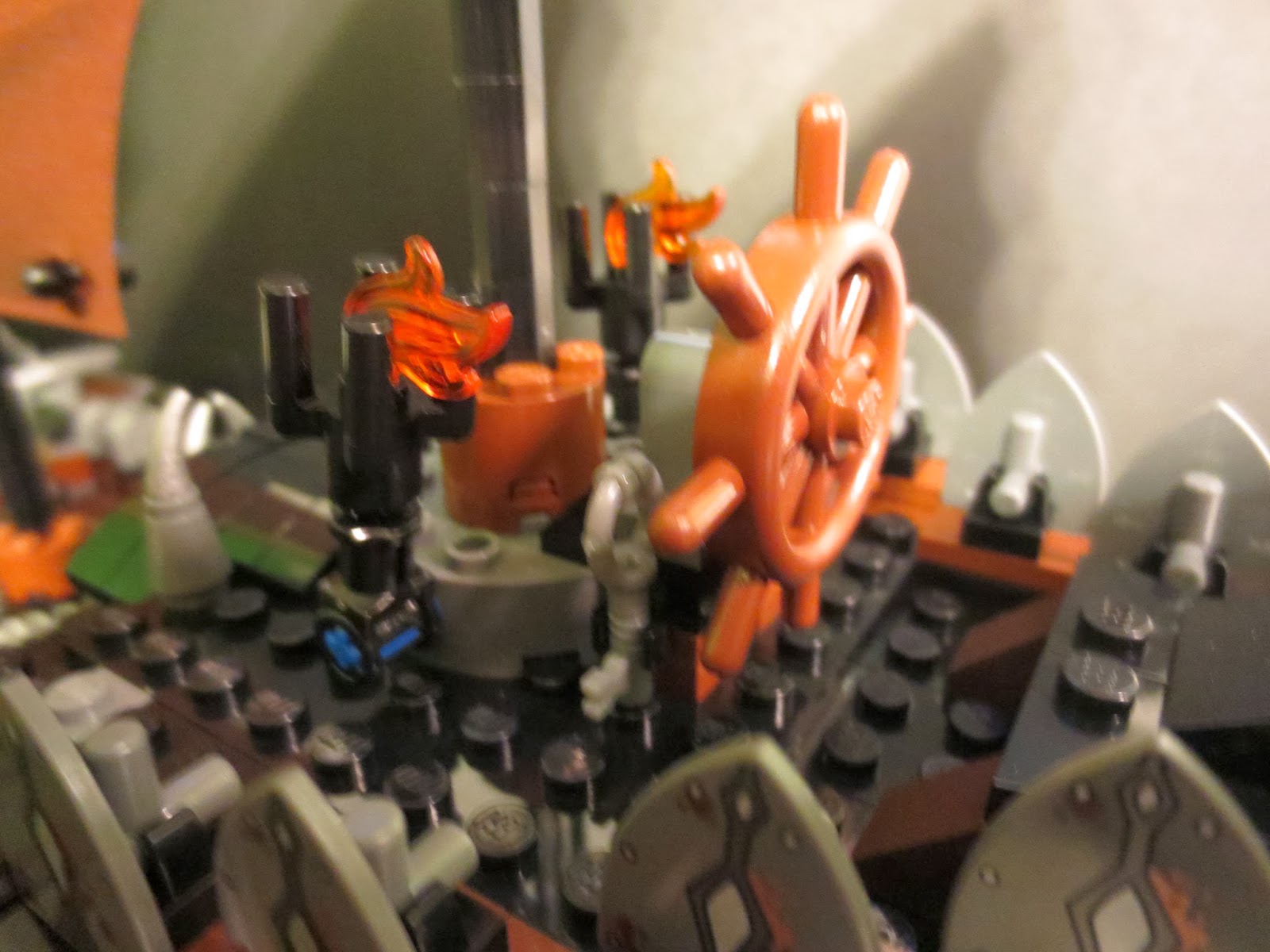 The helm is detachable so you can more easily access the brig. It's very nice and has two torches and storage space for a key. 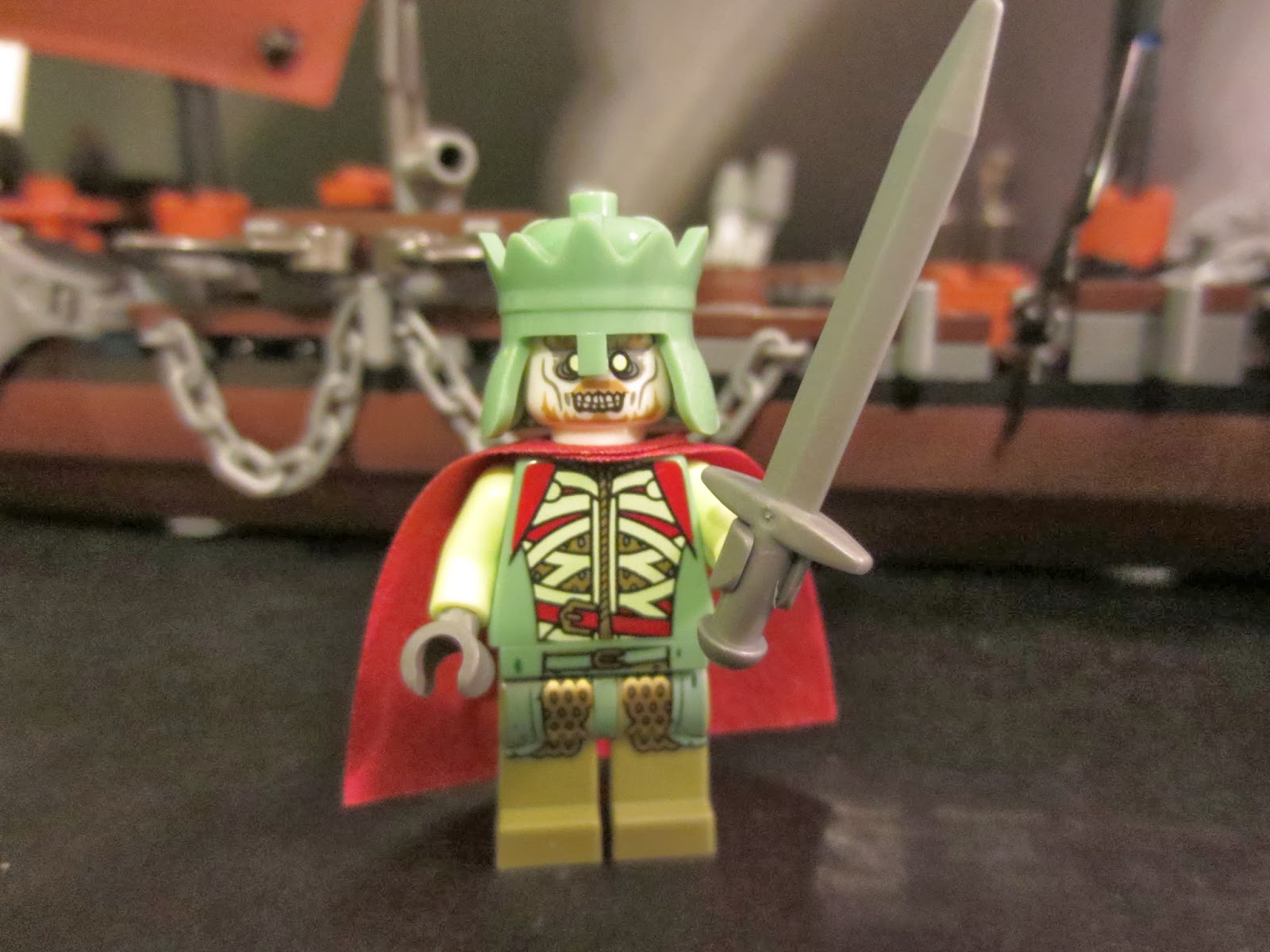 The King of the Dead is a great mini. His head glows in the dark and he has a great, green and ghastly appearance. You can see his ribs, too! Maybe he needs a loaf of bread as well. Both soldiers have double sided heads and different torsos. Also, one guy has brown hands while the other guy has grey hands. 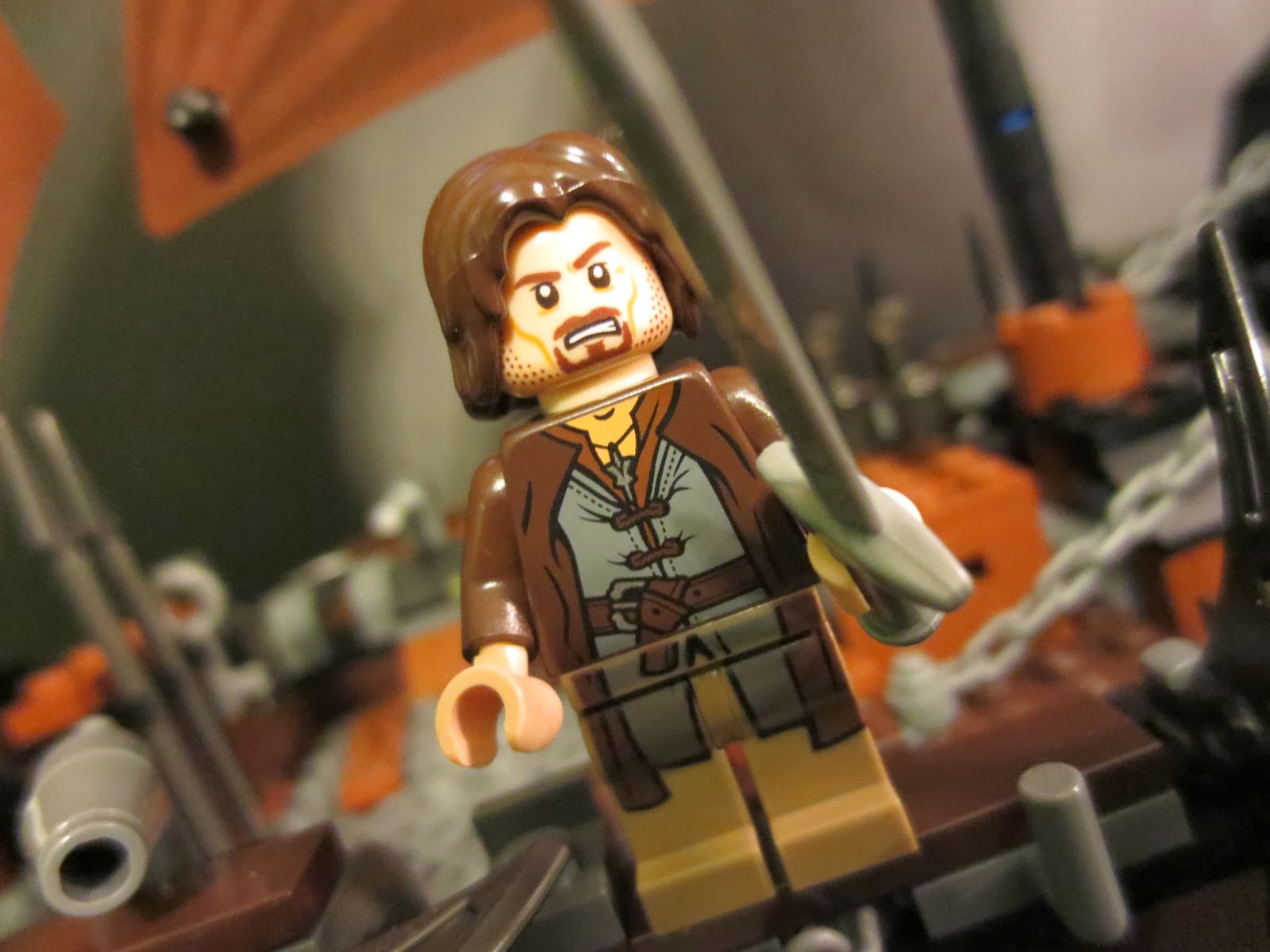 Here's Aragorn. He's the same as all the rest of the Aragorn figures, although this is the only set that comes with Aragorn, Gimli, and Legolas together. 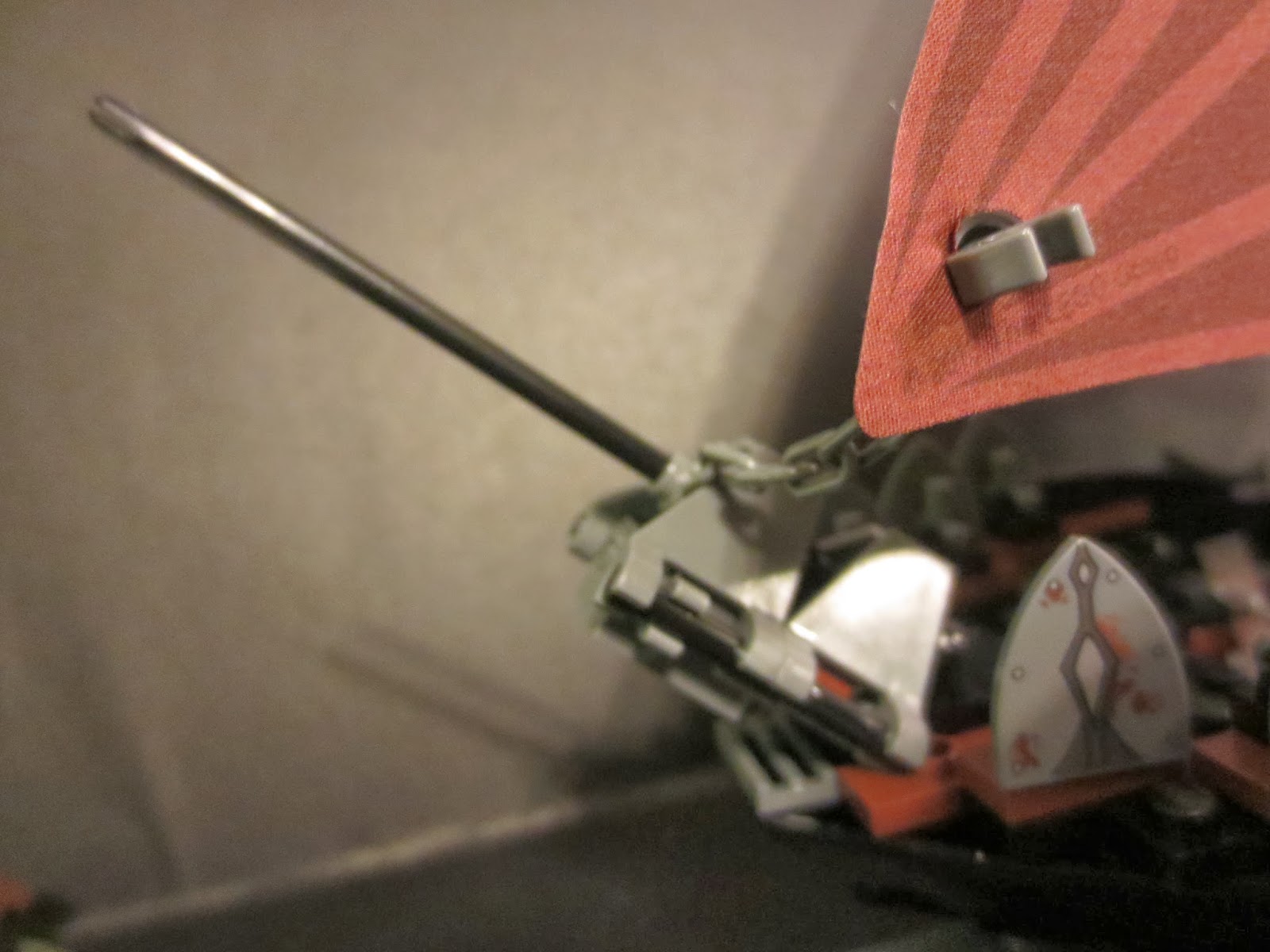 The bowsprit is really cool. I like the armored plates on the side and the use of a Lego chain to attach it to the mast. 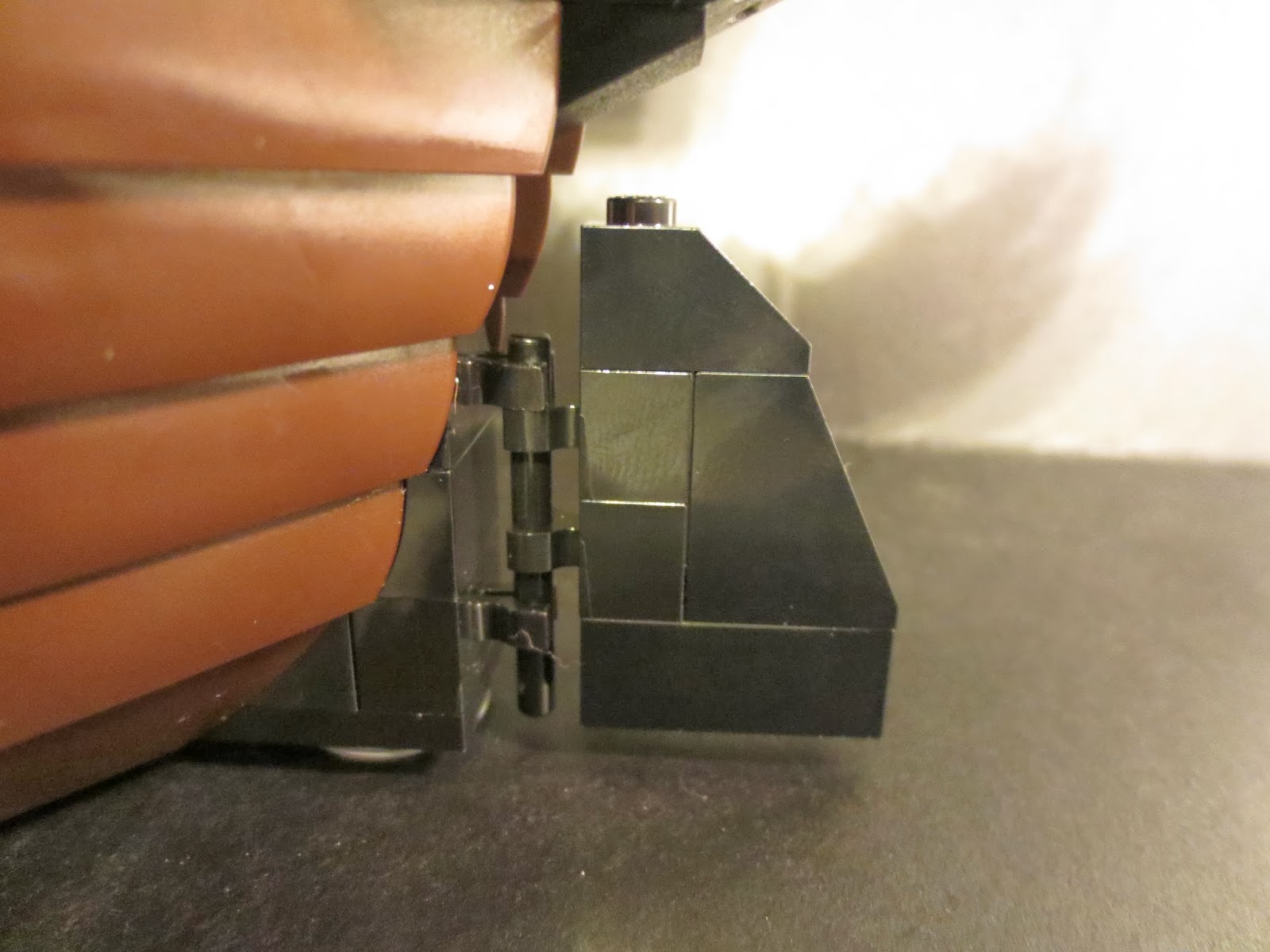 I'd better point out the rudder, which actually moves. OK, I think I've covered everything!
Overall, while the ship isn't as deep as I had hoped, the masts make for an impressive looking vessel. This was a very fun build, too. There's lots of different techniques and it's not as modular as many recent builds, so you're actually building something that gets larger rather than simply adding a bunch of smaller elements together at the end. It's a great ship and I'm quite pleased with it. The minifigures are good, particularly Gimli, the orcs, and the army of the dead. Overall, I'm giving it a Great. It's really a neat set that I didn't expect Lego to produce.If you're going to snatch it up, now is the time as many places discount Lego sets after Christmas. A little shopping around should get you a very decent price on this if you decide that it....floats your boat.