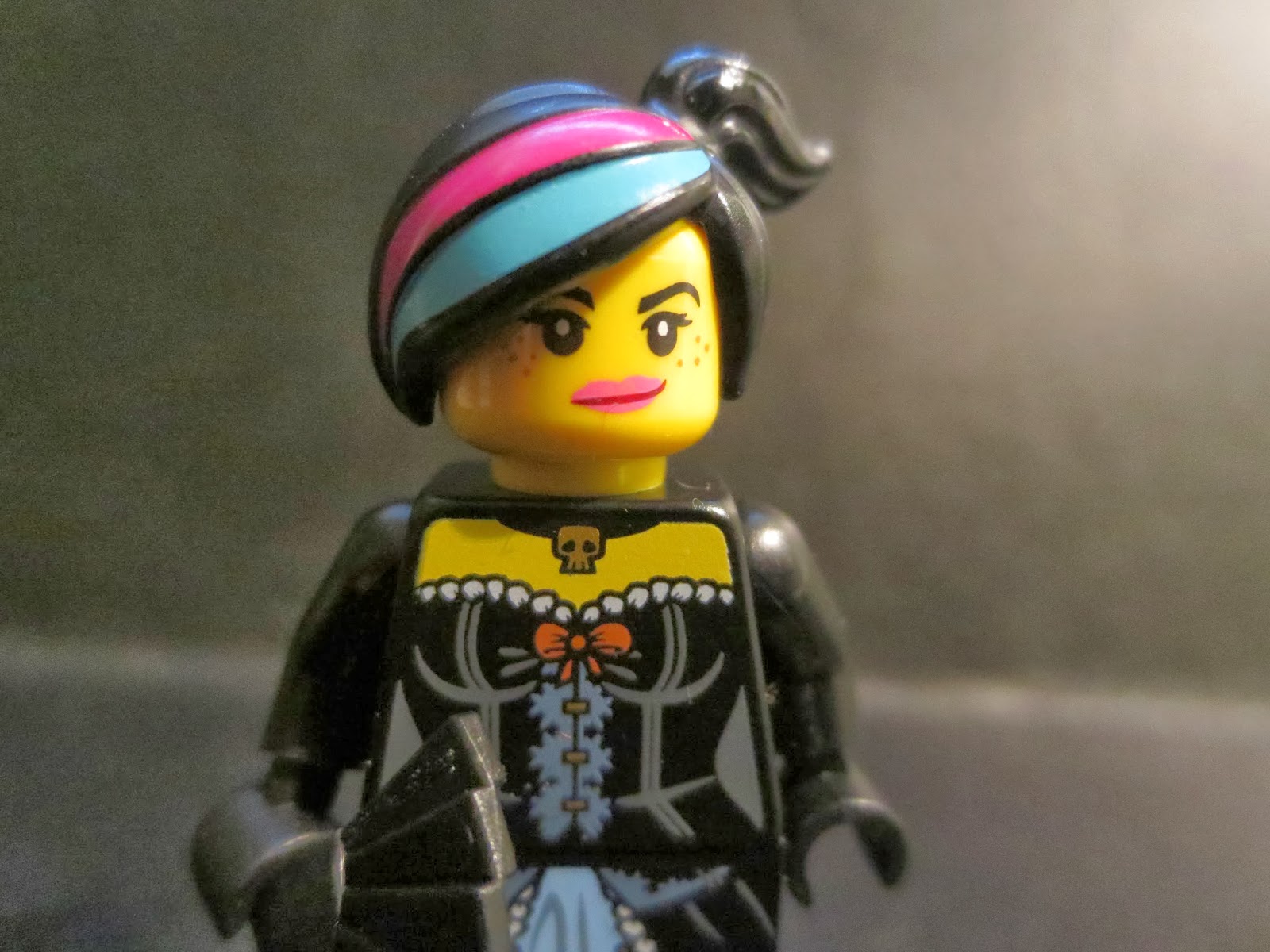 I'm really looking forward to The Lego Movie. With a great voice cast and a great team of directors, the films looks like it could be an incredibly fun and silly animated film that can appeal to a wide demographic. In anticipation of the release of the film, Lego is releasing a number of sets based on the film as well as a series of 16 blindbagged minifigures. Wild West Wildstyle, who I'm looking at today, is one of those blindbagged minifigures. Wildstyle (voiced by Elizabeth Banks) looks to be the protector of the film's protagonist Emmet, and thus a pretty important part of the story. While Wildstyle appears in a few of the other sets, it was this version that appeared to me because of her distinctive period garb. I didn't realize at the time that I bought her that she was dressed for the Wild West; I was actually thinking she was clothed in some sort of Victorian garb. I plan to use her with my enormous haunted Lego world which is an extension of the Monster Fighters theme. I assembled my own Sir Edward Grey, Liz Sherman, and Hellboy Lego minifigures to fight alongside my Monster Fighters, and I think Wildstyle will make a great addition to the team. Ready for a look at this gal? Then join me after the break... 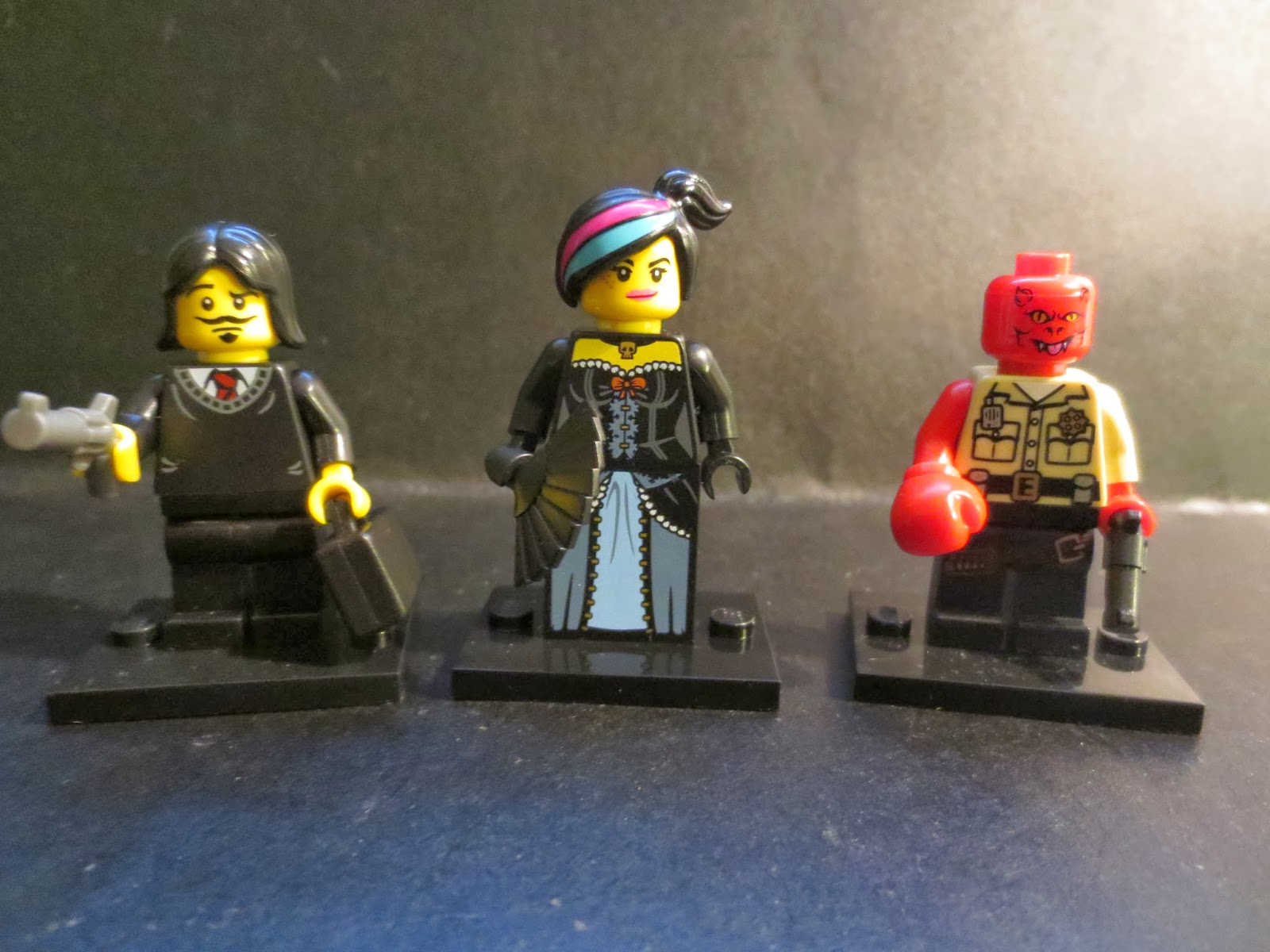 Due to her hair, Wildstyle stands about 1 3/4 inches tall. Overall she's a pretty standard minifigure except for the fact that she has the sloped dress or robes lower body rather than the traditional legs. This isn't anything new as I had a Lego castle in the late 80's that had a princess with the dress piece instead of legs, but it is a bit less common. If you're looking for Wildstyle in the blind bags, the easiest thing to do is search for her dress piece. Only two figures in this series have that piece: Wildstyle and Calamity Drone. Once you find the dress, look for the fan. 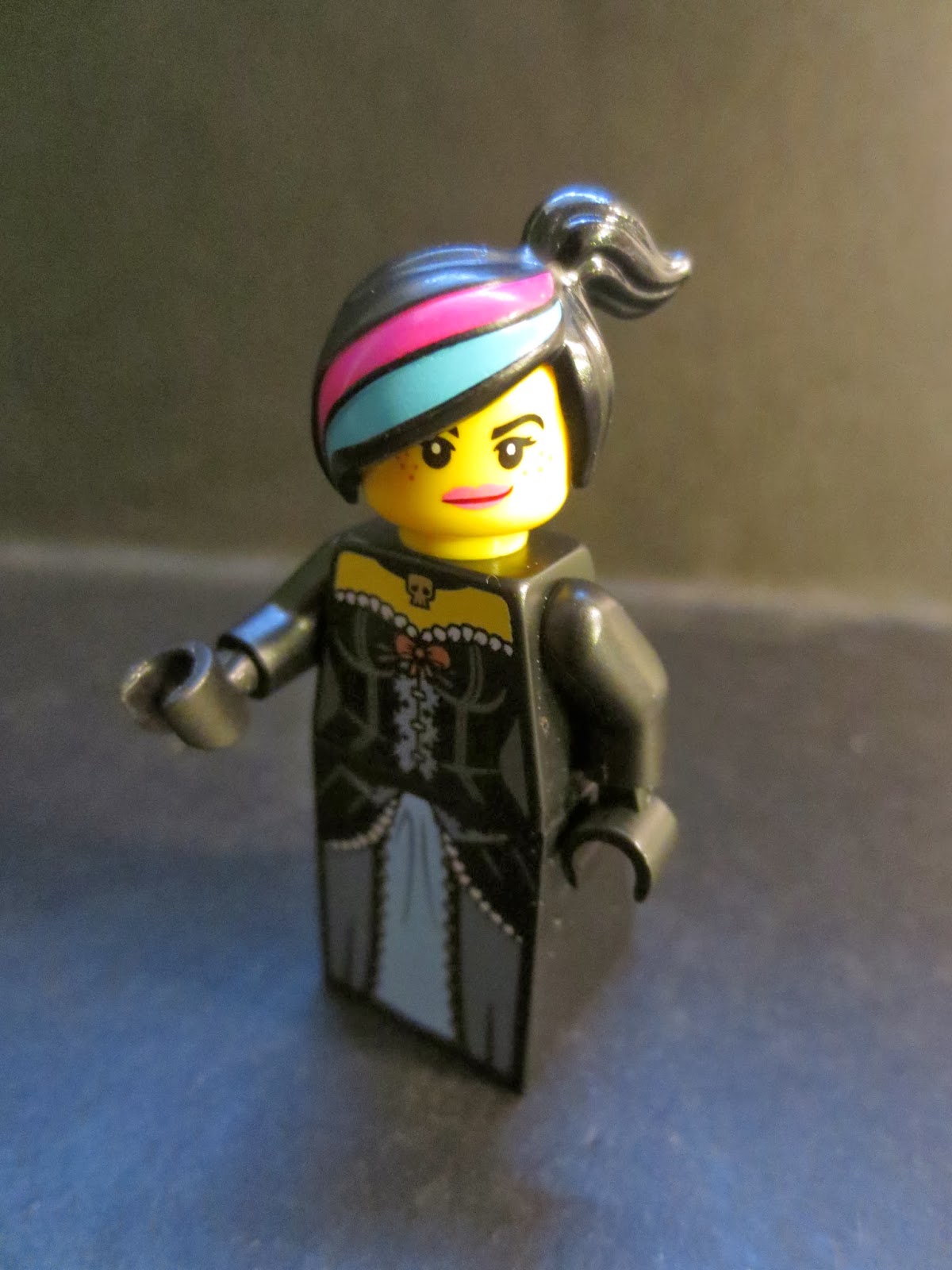 Wildstyle comes in a few pieces, so you'll have to attach her head and lower body to her torso. She has swivel shoulders, swivel wrists, and a swivel neck. You can also remove the hands and arms with a little effort to customize your own creations. 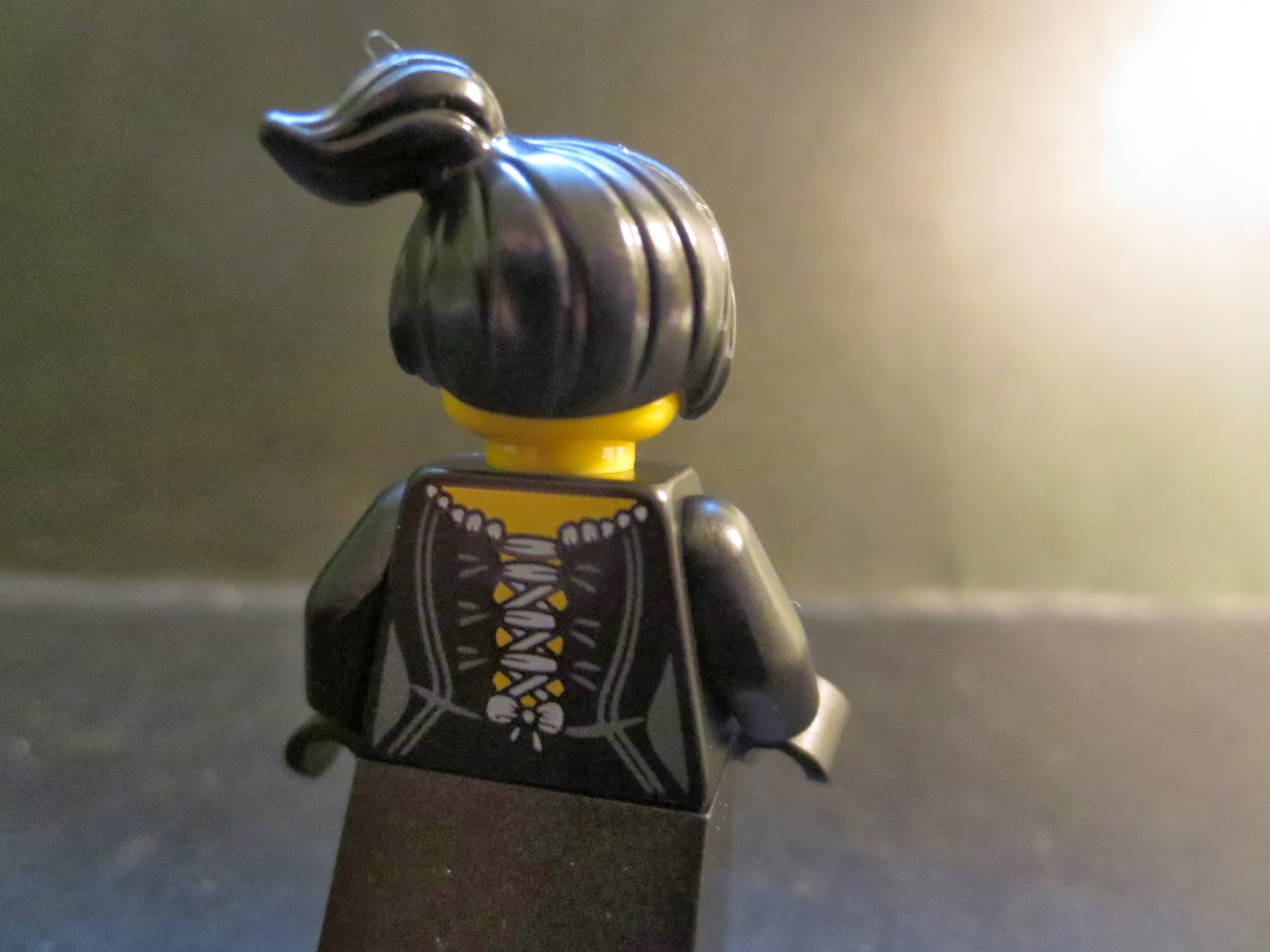 There's not much to say regarding sculpting since most Lego figures reuse the same elements. Wildstyle's hair is very cool, however. I love her bangs and the blue and fuchsia streaks in her hair. Her freckled face is really cute, too. She's got a tough, confident smirk that makes her look like she means business. Her torso is printed on both the front and back and shows off her cool black corseted dress and her cool skull choker. Flip her around and you can see the lacing in the back. The lower body/ dress continues the unique dress design. She's a really detailed Lego minifigure that should be somewhat versatile for a few different themes. 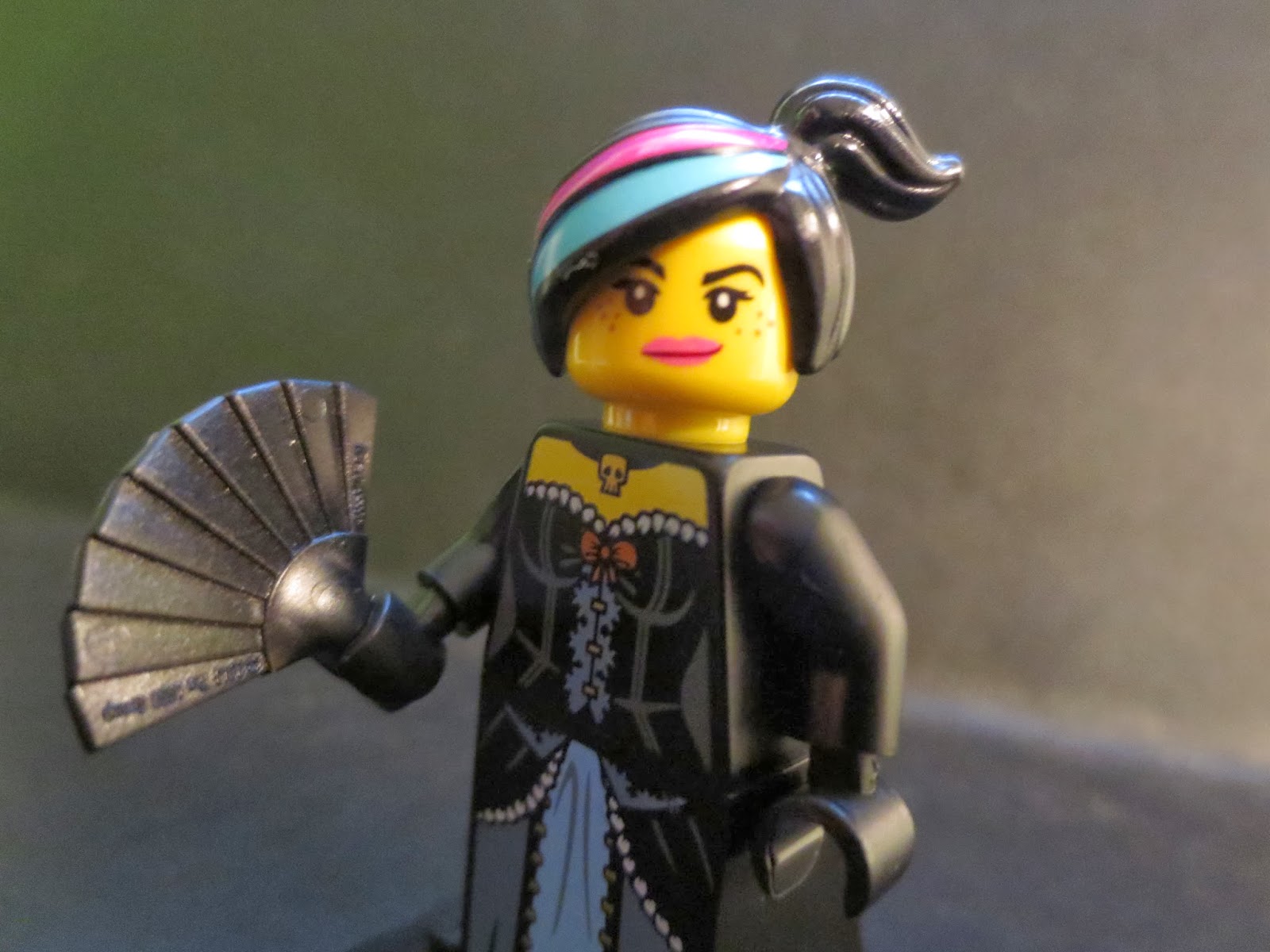 Besides the pieces needed to build her, Wildstyle also comes with a fan, a stand, and a checklist of all 16 figures from this series of minifigures. The fan is simply molded in black and isn't too exciting, but it does go with her outfit. I love the stands and am really glad that Lego has continued to offer them in each series of minifigures. They're perfect for all kinds of displays and stands are always a plus in my book! 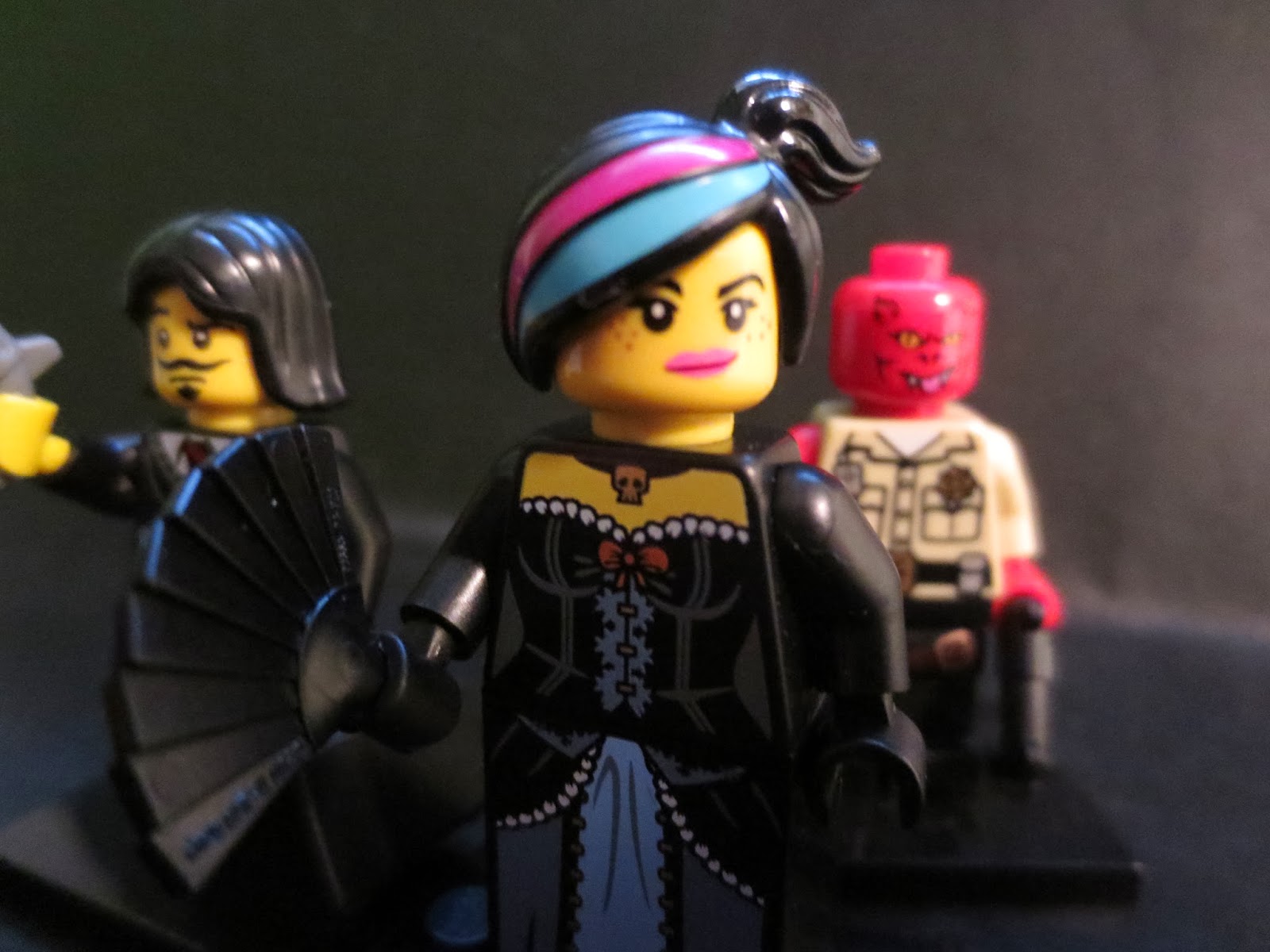 When comparing her design to other Lego minifigures, I think Wildstyle is easily a Great mini. While her accessory is a bit dull, the level of printed detail on the figure is excellent. She's very fun and I'm really excited to both see this character in action in The Lego Movie and to see how I can integrate her into my unique Lego world. I imagine I'll use her as a medium of some sort who is an integral member of the Monster Fighters team. I'll probably arm her with a pistol as well for shotting zombies, just because. Maybe give her a crystal ball or a skull. Who knows? Darn, I love Legos!