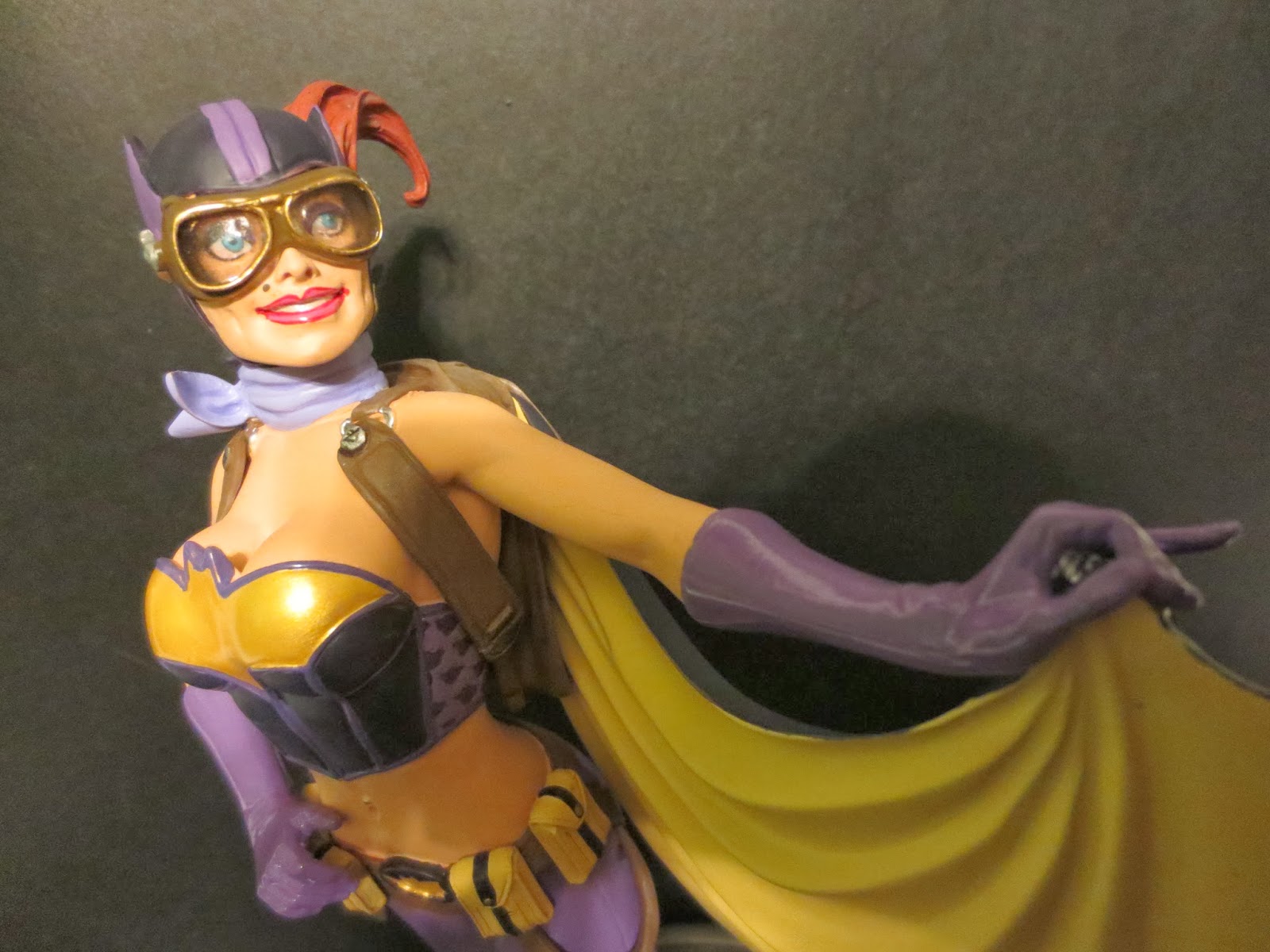 Late last year DC Collectibles began releasing their new line of statues based on the women of the DC Universe: DC Comics Bombshells. The series has quite an interesting art design style that involves taking the super gals of the DC Universe and rendering them as if they were 1940's era pin up models as might be seen on the sides of bombers. It's a really great idea and, let's be honest, it was guaranteed to work since DC Comics easily has the greatest line-up of females of any property on the planet. The line started out with a bang with Supergirl and has since covered Wonder Woman, Poison Ivy, and Harley Quinn in a relatively short period of time. While I love the look of these figures, my money for higher end DC collectibles is all reserved for Batgirl merchandise. Well, now that Batgirl has finally made it into DC Comics Bombshells, it's time for me to check out this line and see if it's really the slick, spiritual successor to the Adam Hughes designed Cover Girls of the DC Universe that some have proclaimed it to be. Ready for a look at Barbara "Babs" Gordon as Batgirl in her 40's pin up finest? Then  join me after the break.... 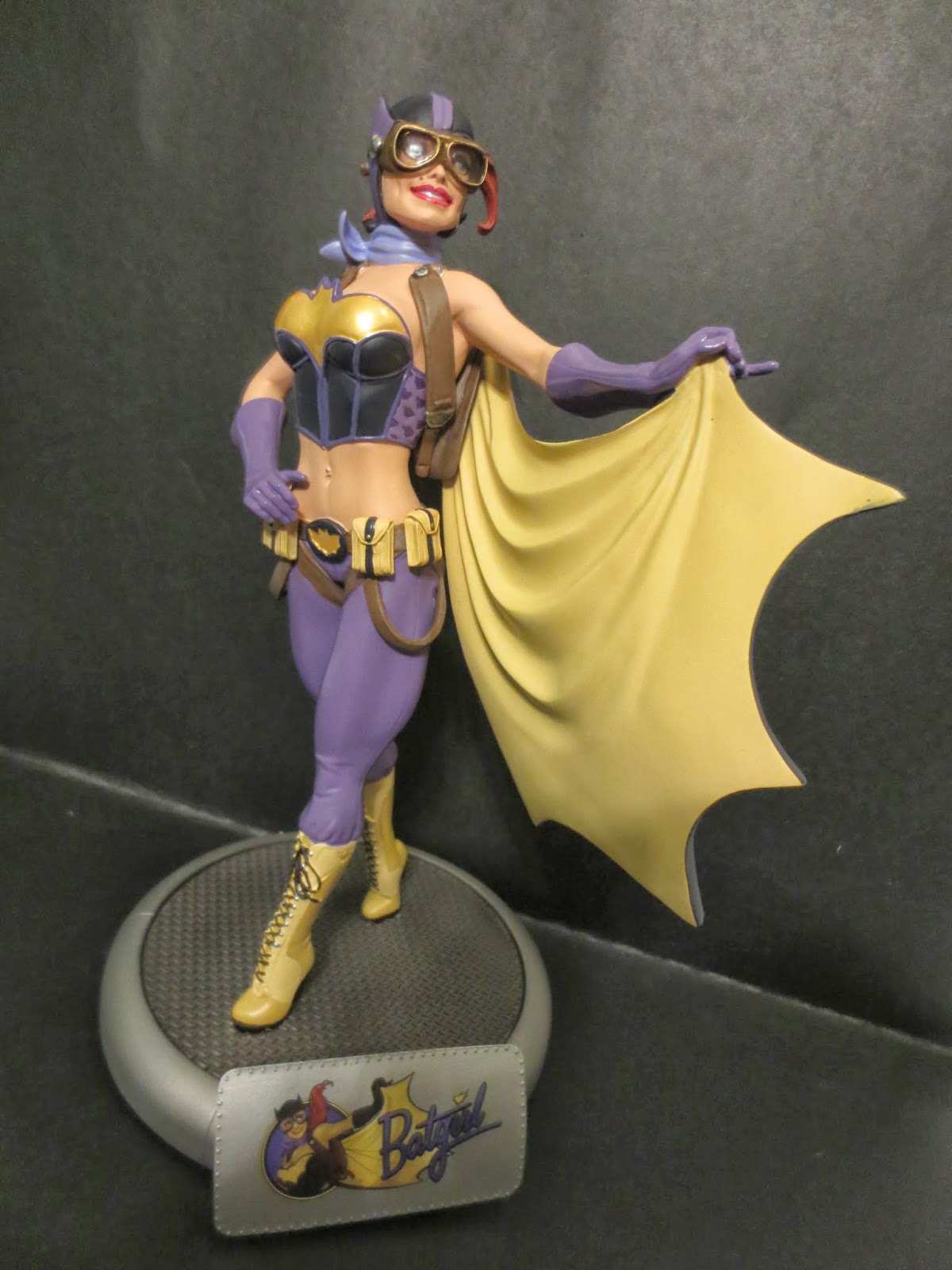 Batgirl is permanently affixed to her stand and stands about 10 1/2 inches tall (factoring in the stand). As I mentioned above, DC Comics Bombshells has a really fun style that brings to mind the nostalgic images of 1940's era pin up girls that you would expect to be painted on the sides of bombers and other aircraft. She's colorful, curvy, and just a little bit exaggerated. The statues are based on the gorgeous art of Ant Lucia and sculpted by Tim Miller with a run of 5200 cold-cast porcelain statues produced. My statue is # 2779 of 5200. 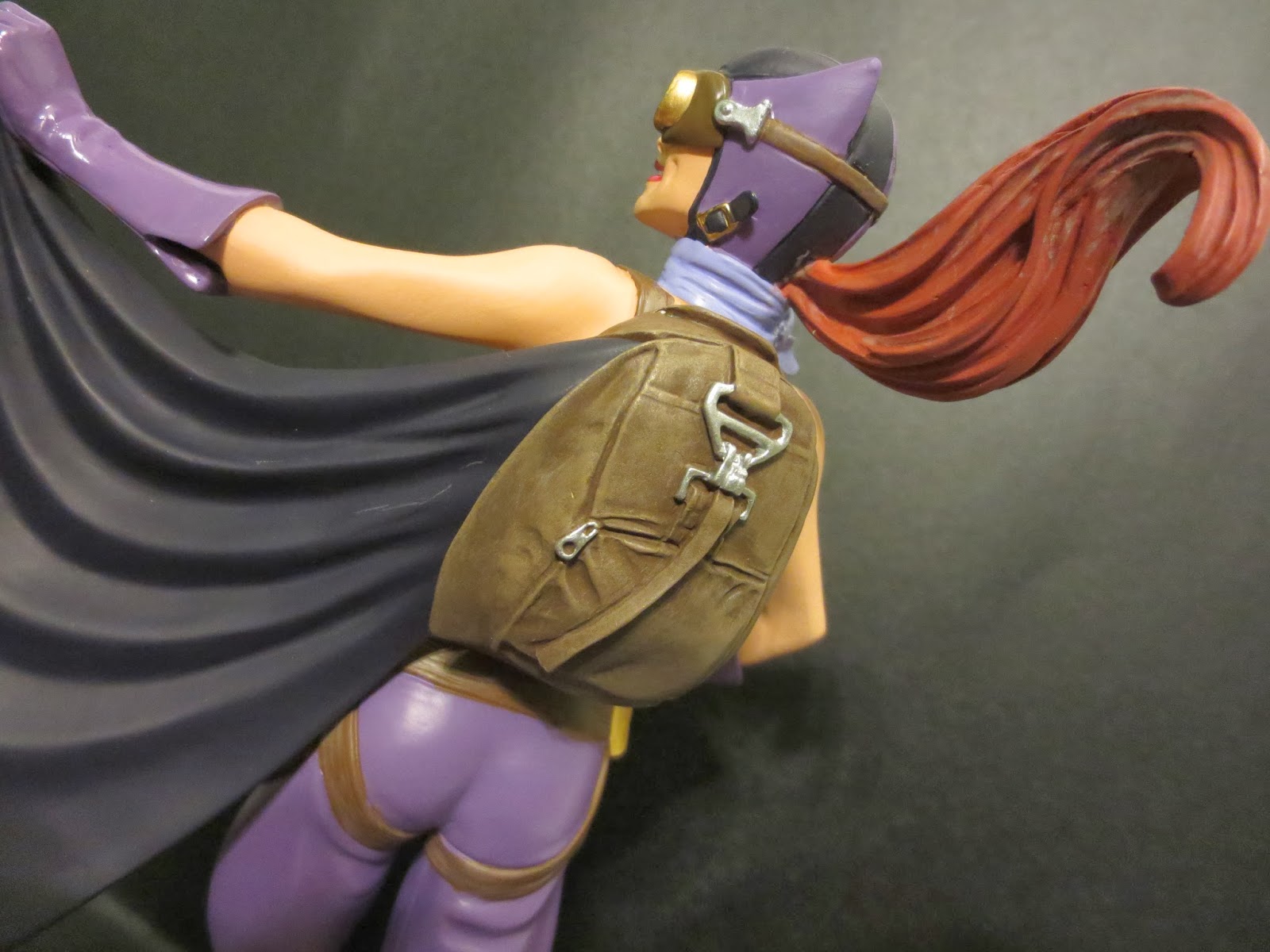 Each of these statues has found a fun way to incorporate the trademark style and characteristics of a classic DC heroine (or villainess) into a period appropriate costume. In this statue we find Batgirl decked out in bits and pieces of purple and gold aviator's gear and her cape coming out of a parachute pack. This series has had some fantastic and fun poses, and I have to say that I really like Batgirl's. Barbara is walking forward with her long red hair blowing in the breeze and her left arm outstretched to show off her cape. I don't like the angle of her head, however. It's tough to get her an an interesting angle and to still be able to see her eyes due to her thick goggles. If her head were looking a little more towards the front of her body (as in Ant Lucia's art) I think the statue would be a lot more effective. 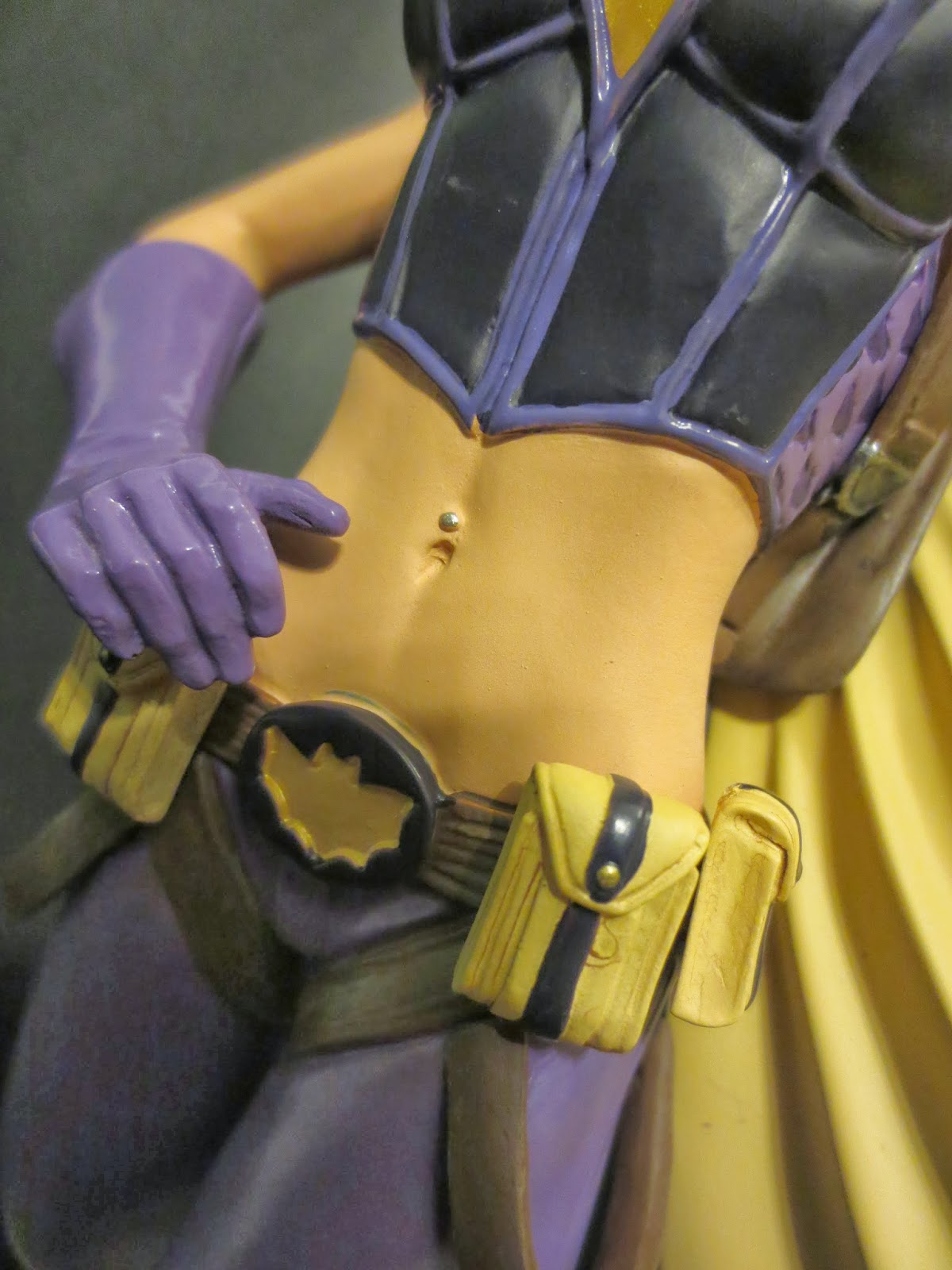 The sculpt is quite nice over the majority of the body. Batgirl is wearing a bat-emblazoned corset, tight pants with an aviator's harness styled utility belt, high heeled lace up boots, gloves, an aviator's scarf, a parachute pack with a cape coming out, and an aviator's hood with goggles. Detailed parts like the belt, corset, and parachute pack look great with lots of nice detail that manages to actually look like vintage clothing and not like straight superhero garb. The utility belt is just fantastic with really nicely detailed pouches and a bat-shaped belt buckle. The corset is also nicely detailed with a great design that shows off Babs' bombastic figure. Batgirl is usually a pretty conservative dresser, so it's interesting that this statue is the second least clothed version of the character that I'm aware of, right behind Kenner's Legends of the Dark Knight Batgirl that was released in 1998. Kind of wild, no? One thing that I think is a little odd about the sculpt is that she has a navel piercing. That just doesn't seem to go with vintage style pin up art, does it? Did they have those back in 1940? 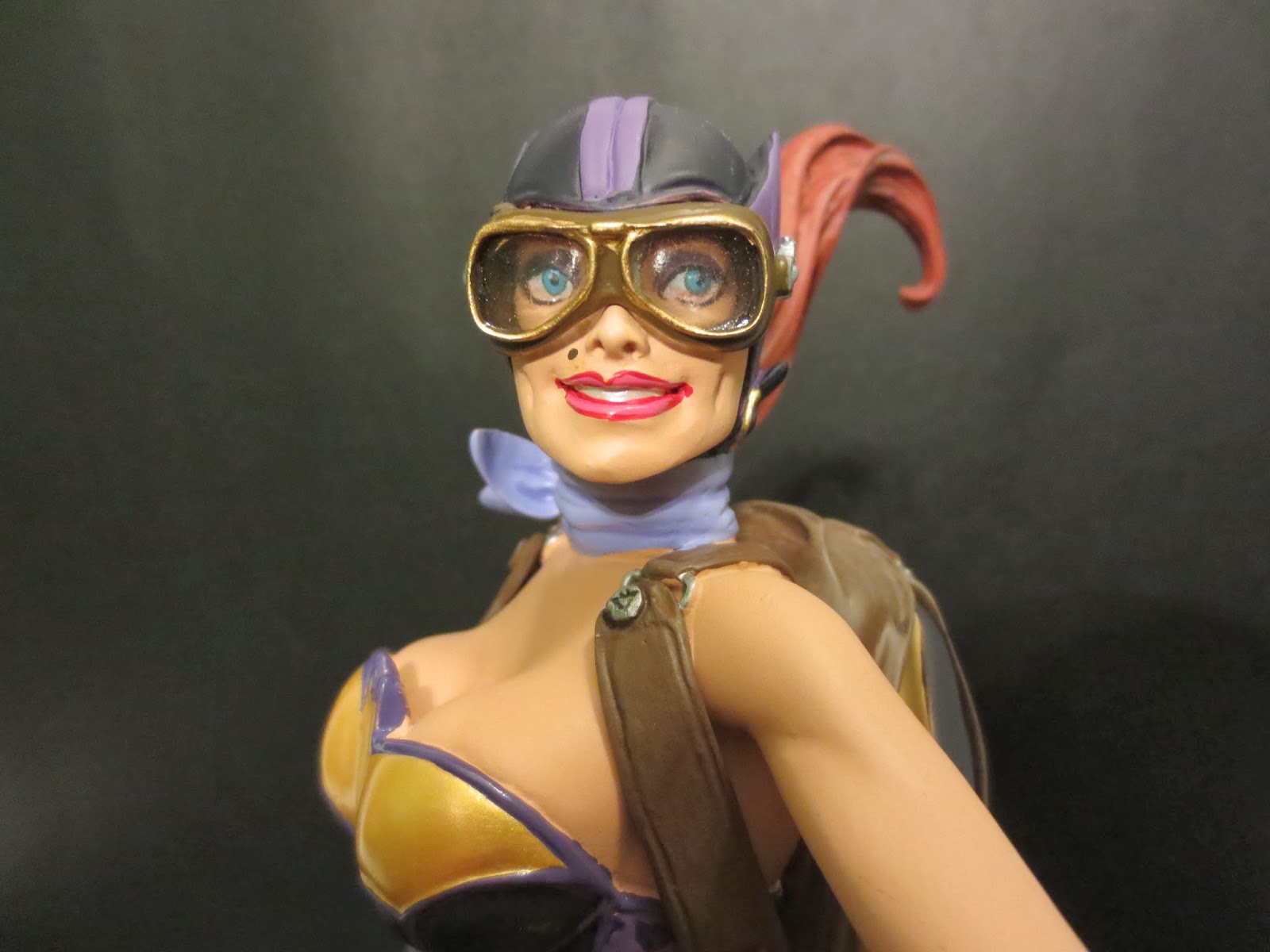 Well, the body and outfit look great, but how about the head? Here's where I start to have some problems with the statue, unfortunately; I think the design of the goggles really doesn't do this statue any favors. I love the hood itself and the idea of the goggles is fantastic, but they're quite thick (they actually look to have lenses) and they hide most of Barbara's face. I think the effect ends up making her stylized lips and smile look rather odd and disproportionate without the rest of her face visible. I think smaller, thinner goggles pushed up over her forehead might have been a better idea. The flowing hair jutting out from underneath the hood looks great, though, and really suits the character and this figure's design as representing an aviatrix. 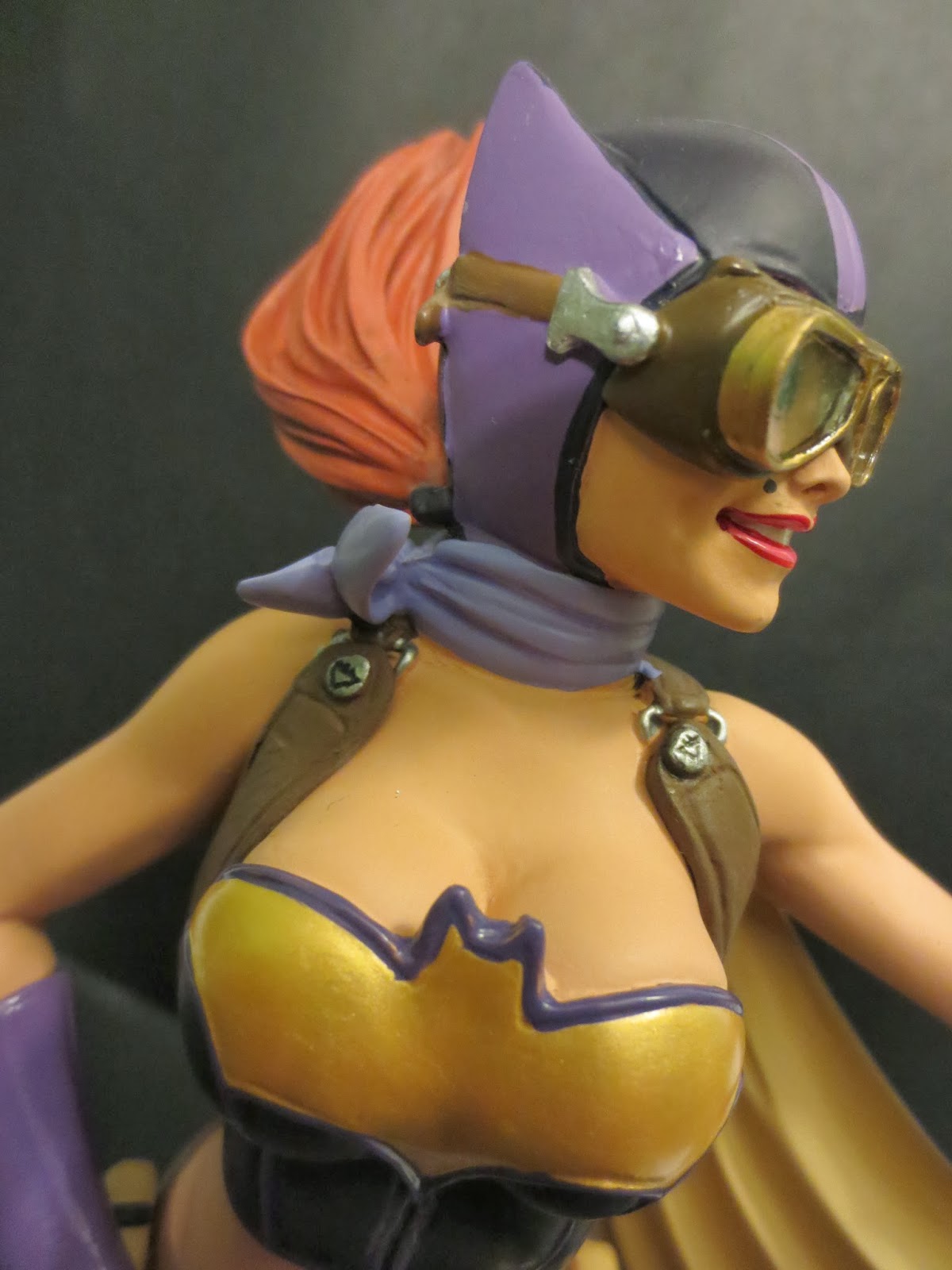 I love the color choices of purple and gold for Batgirl; not only does it pay homage to her classic Yvonne Craig/ 1960's appearance, but it also gives her a color scheme unique among the other statues in this series. While the statue mimics the color style of pin up art by using simple, bold colors, there is a fair amount of detail work on the boot laces, parachute pack, and aviator's cap. Unfortunately, many of the edges are quite rough with a good deal of slop and paint bleed. The bright yellow underside of the cape, definitely one of the focal points of the statue, has one or two high visible black smudges on it. With the price DC Collectibles is asking for these statues I really don't think these types of mistakes or sloppy lines are acceptable. From about 1 1/2 to 2 feet away she looks fine, but get any closer and some of the paint mistakes become much more apparent. 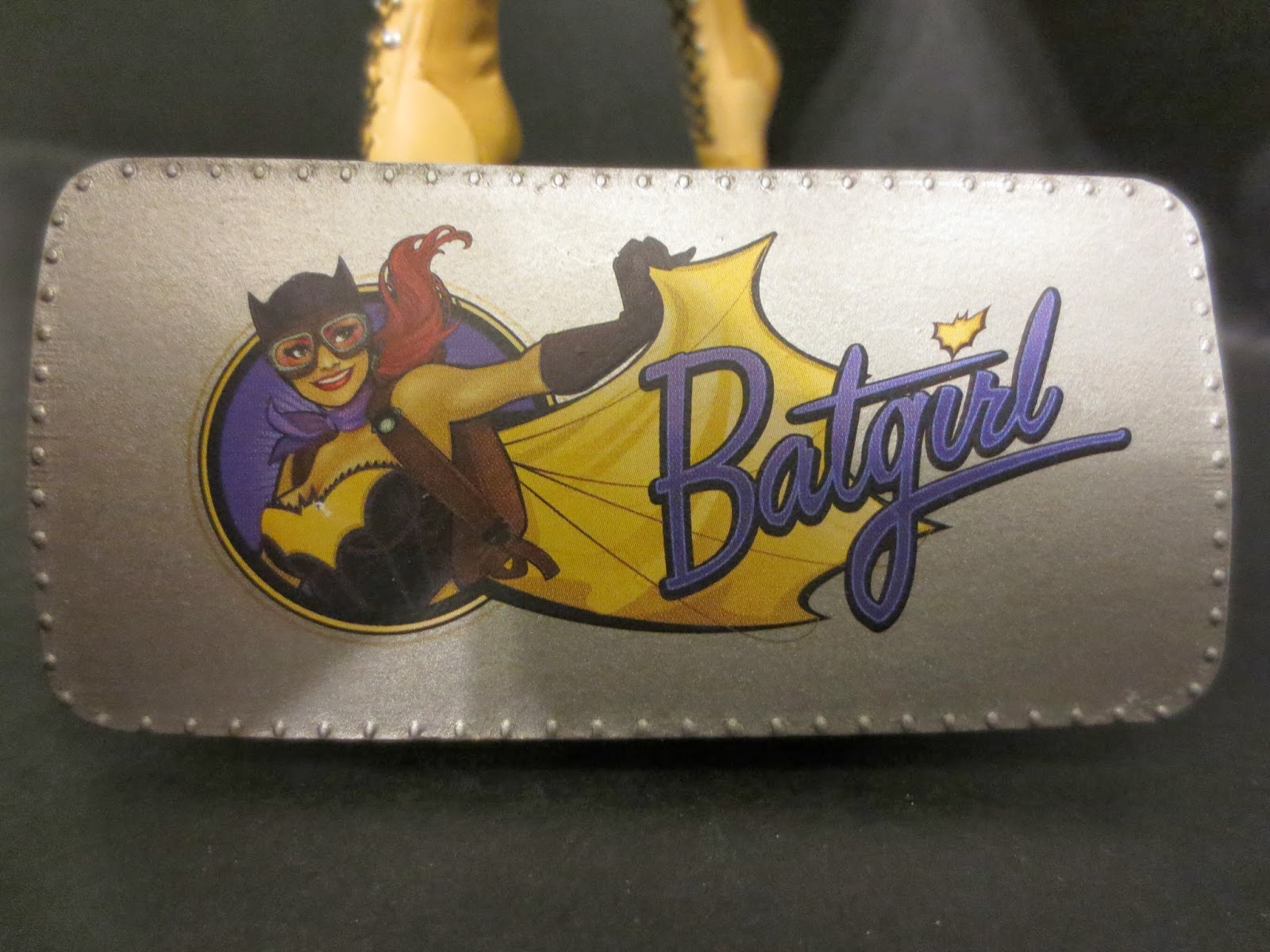 As a statue, Batgirl comes with no accessories. She's also not removable from her base, but why would you want to? The base is incredibly cool and solid and keeps the statue displayed in style. It has a texture to it and a piece of riveted "metal" attached that bears Batgirl's name and Ant Lucia's sketch art. This is a really cool feature that all of the statues seem to have that helps to convey the theme of this series really well. It looks like an actual panel from an old B-52 that has been designed with this style of character art! 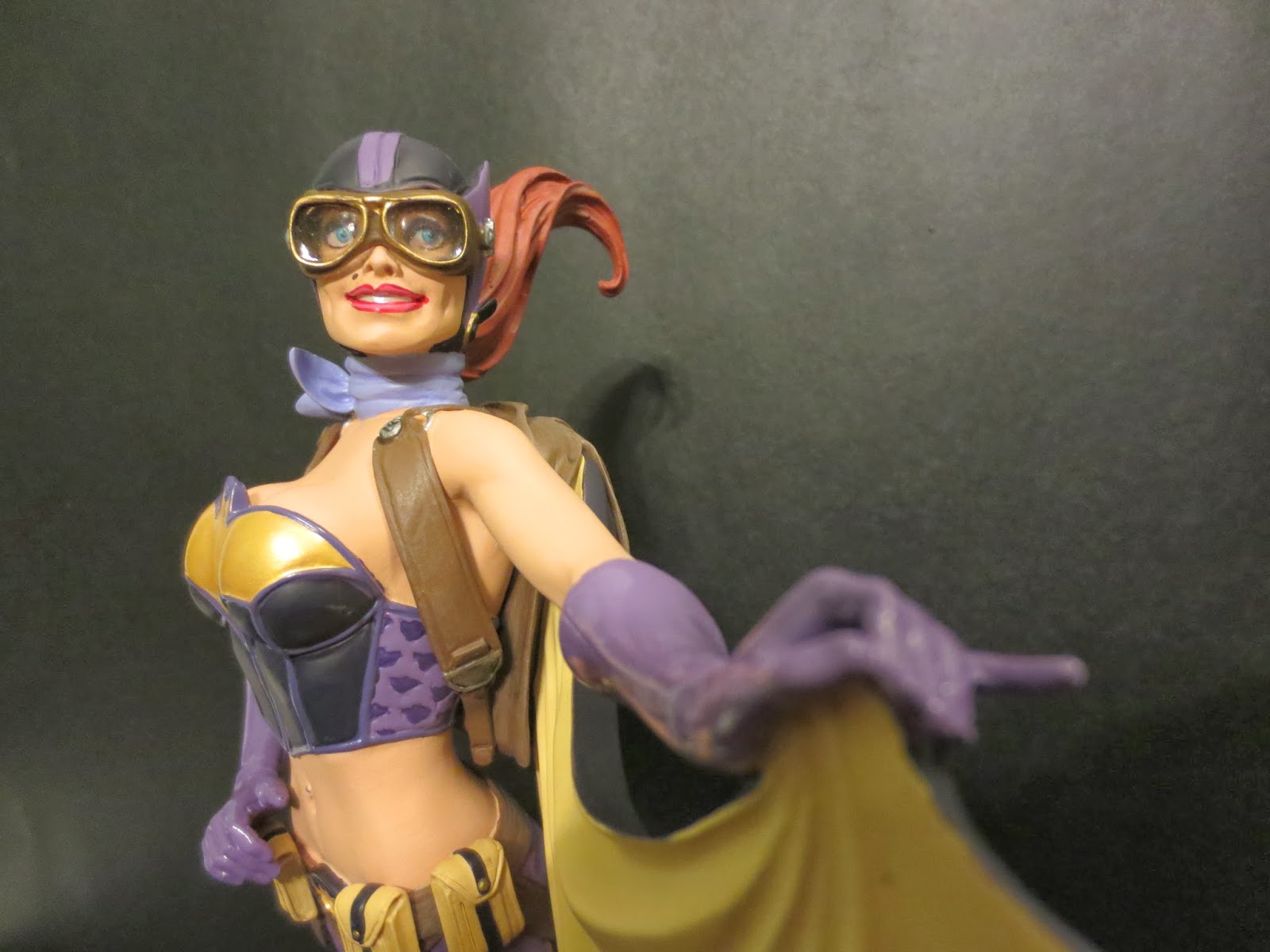 I'm feeling pretty conflicted on this statue. While I absolutely love Batgirl ("Really? You don't say!" said nobody ever) I really don't think this is at all the best statue in this line so far. In fact, I think it's actually the weakest statue so far. Upcoming statues like Black Canary and Stargirl look even better. I think I could overlook the weak paintwork if the headsculpt were better. It really hides too much of the character's face, especially her eyes. The gorgeous faces of each other character in the line, despite whatever sexy outfit they might be wearing, definitely were the selling points. I think Batgirl is just far too hidden and it weakens the effect. It's a great idea but somewhere along the way, the execution of this project just produced a dud. Sorry, Babs. Maybe next time. As for now, I'm giving this statue an Eh and a 1/2. Unless you're a completest on this line or someone who collects every piece of Batgirl memorabilia like me, you'd probably due best to skip this one. 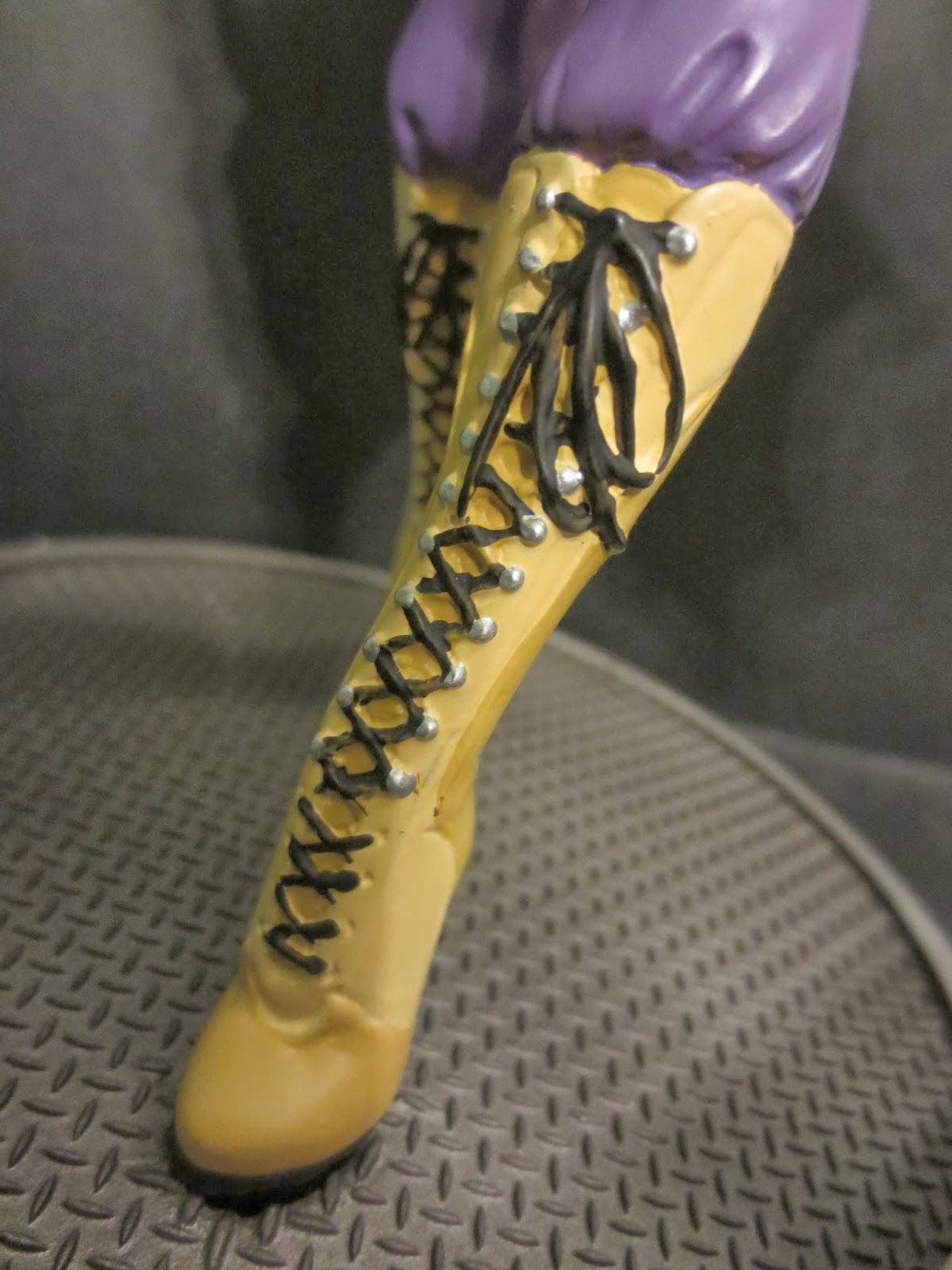 Batgirl is still in stock at Big Bad Toy Store along with preorders for Black Canary, Stargirl, and the second run of Poison Ivy.