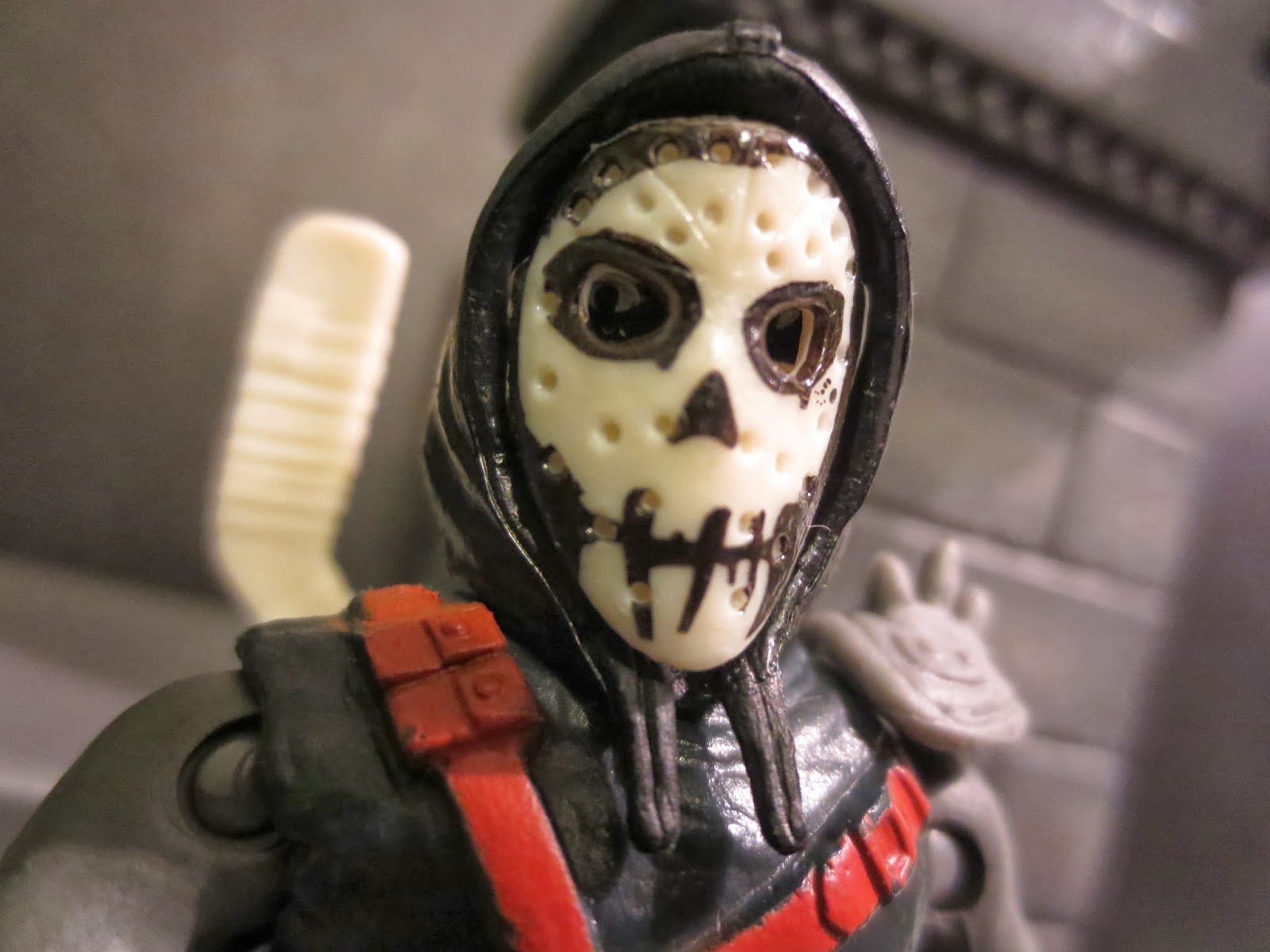 Goongala! Goongala! Casey Jones has finally arrived in Playmates Toys' new TMNT series based on the Nickelodeon cartoon and he's as weird, wacky, and vicious as ever.  Casey Jones definitely has a long history with the franchise and has appeared in a number of different TMNT media incarnations, perhaps most famously in the original 1990 film where he was played by Elias Koteas. Casey Jones is a fantastic character and, while he's had had a number of diverse portrayals, almost always manages to be both sympathetic and awesome. He and April have really become the kind of "everyman" and "everywoman" characters for the franchise which I absolutely think helps to integrate new generations of fans into the popularity. Casey Jones is without a doubt both my second favorite TMNT character (behind Raphael) and my second favorite Grateful Dead song (behind "Uncle John's Band"), but his figure might just be my favorite from this new line. Ready for a look? Then join me after the break.... 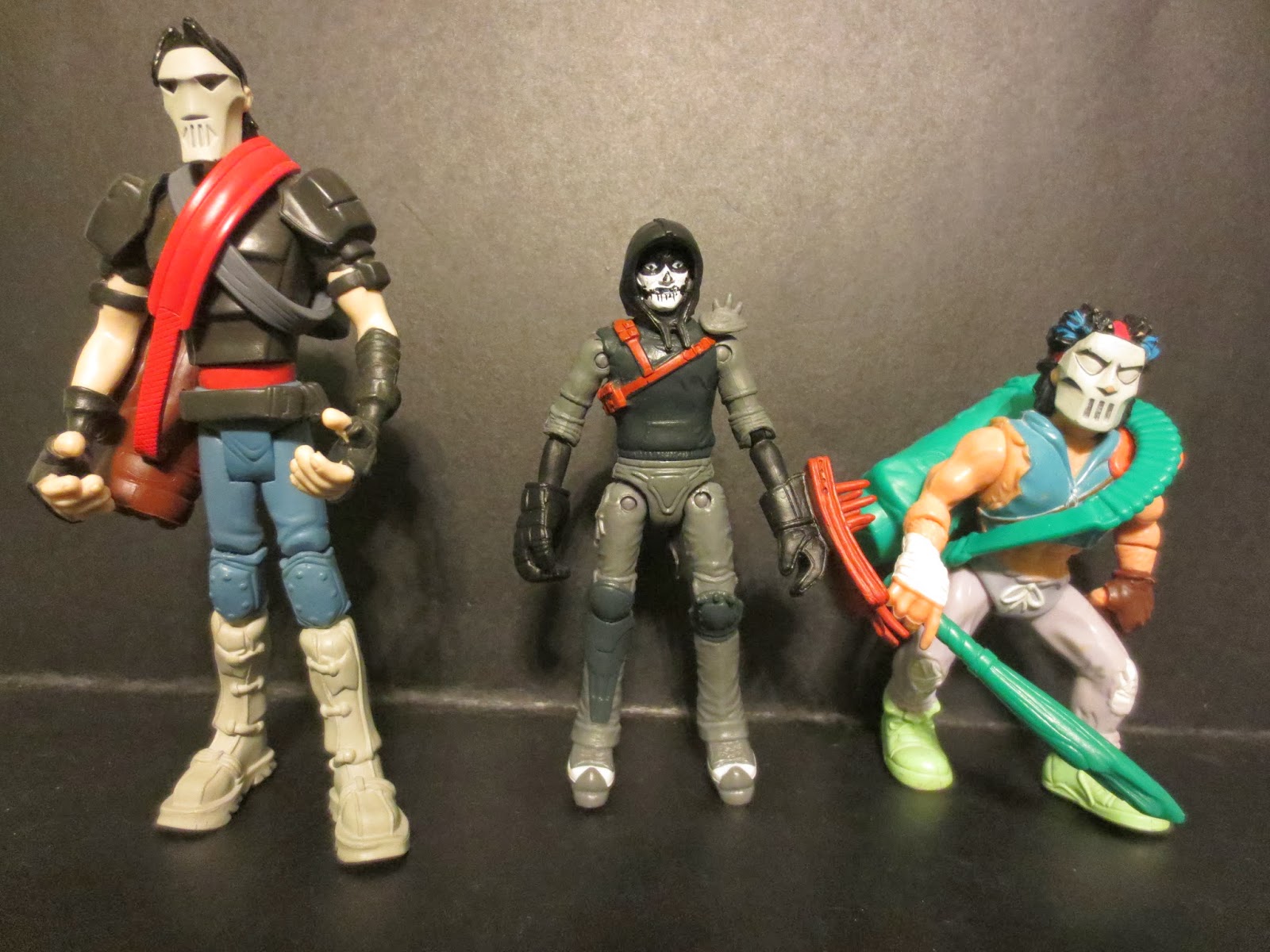 I haven't seen any of the second season of Nickelodeon's Teenage Mutant Ninja Turtles yet, but from the images I've seen Casey Jones here is a great representation of his on-screen character. He does look really different from many previous incarnations of the charcater, however, but he still hits all the right notes. Kevin Eastman has talked about the inspiration for Casey as being the desire to parody the number of vigilante appearing in comic books whose lives were altered by some traumatic event. Rather than give Casey a traumatic event to inspire his vigilantism (at least in his earliest appearances) Eastman simply had him be a guy who watched too many TV shows. Eastman and Laird didn't give him any kind of high-tech gear or a slick costume, either; he's a guy wearing hockey pads, sweat pants, and sporting goods equipment. While many of the figures having been moving away from the style of the first few waves of figures towards the more "animated" appearance of the show, I think Casey could fit in wherever. He has a great, menacing appearance that really makes him seem very versatile. 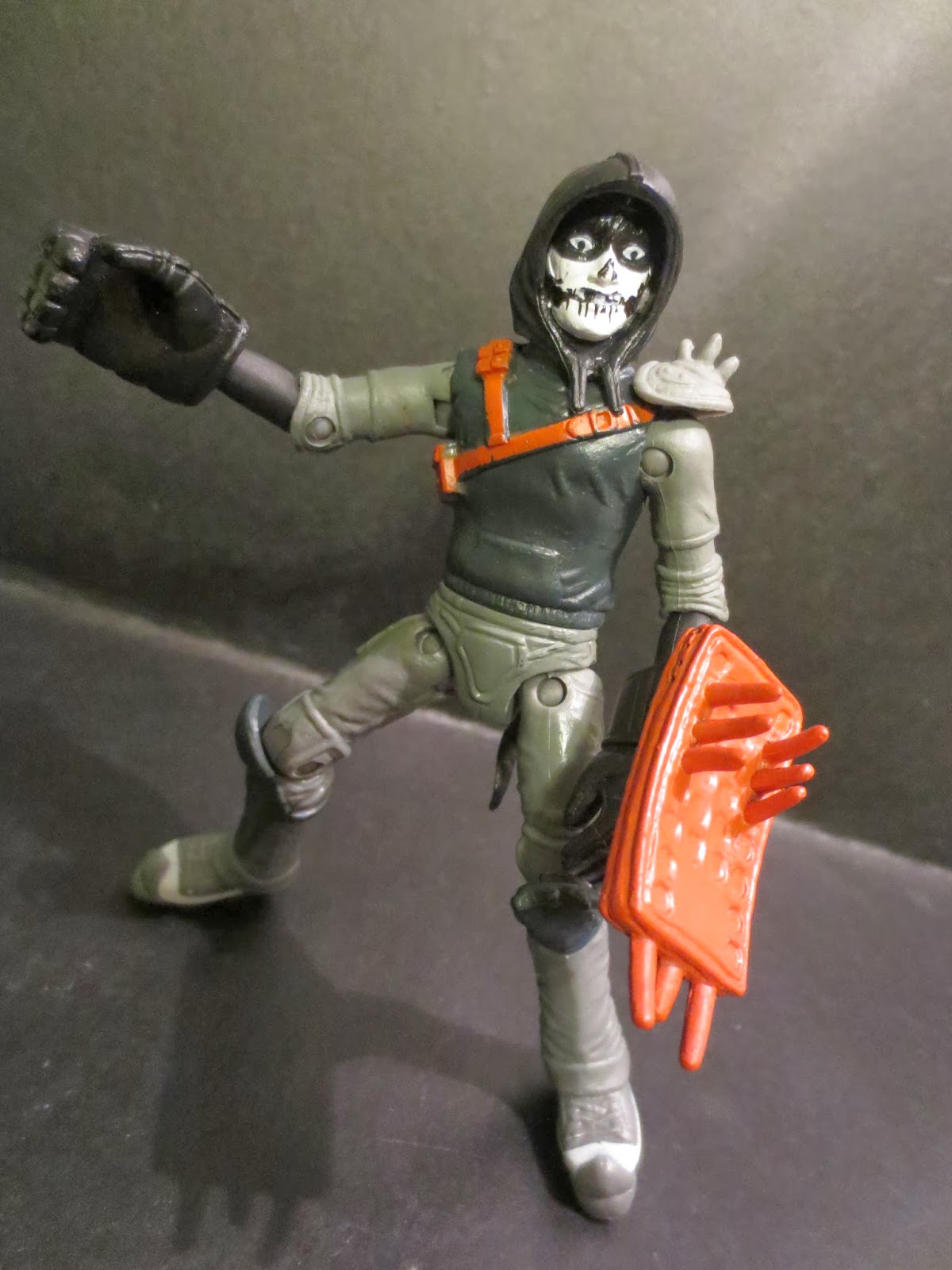 The articulation on these figures has been all over the place but fortunately Casey is on better end of things. He's not as well articulated as the first series Turtles, but he's close. Casey features: swivel/ hinge knees, swivel/ hinge hips, swivel/ hinge shoudlers, hinged elbows, swivel wrists, and a swivel neck. The swivel neck doesn't offer much motion due to Casey's hood, but everything else is solid, sturdy, and gives you the ability to get him in some decent fighting poses. I do wish he has some type of elbow or bicep swivels so he could better hold his weapons with both hands, but he still can hold them two handed with a little coaxing and effort. I'll mention it again in a minute, but Casey has roller blades permanently affixed to his feet. While this looks awesome and I don't mind it, it does make him difficult to stand up. 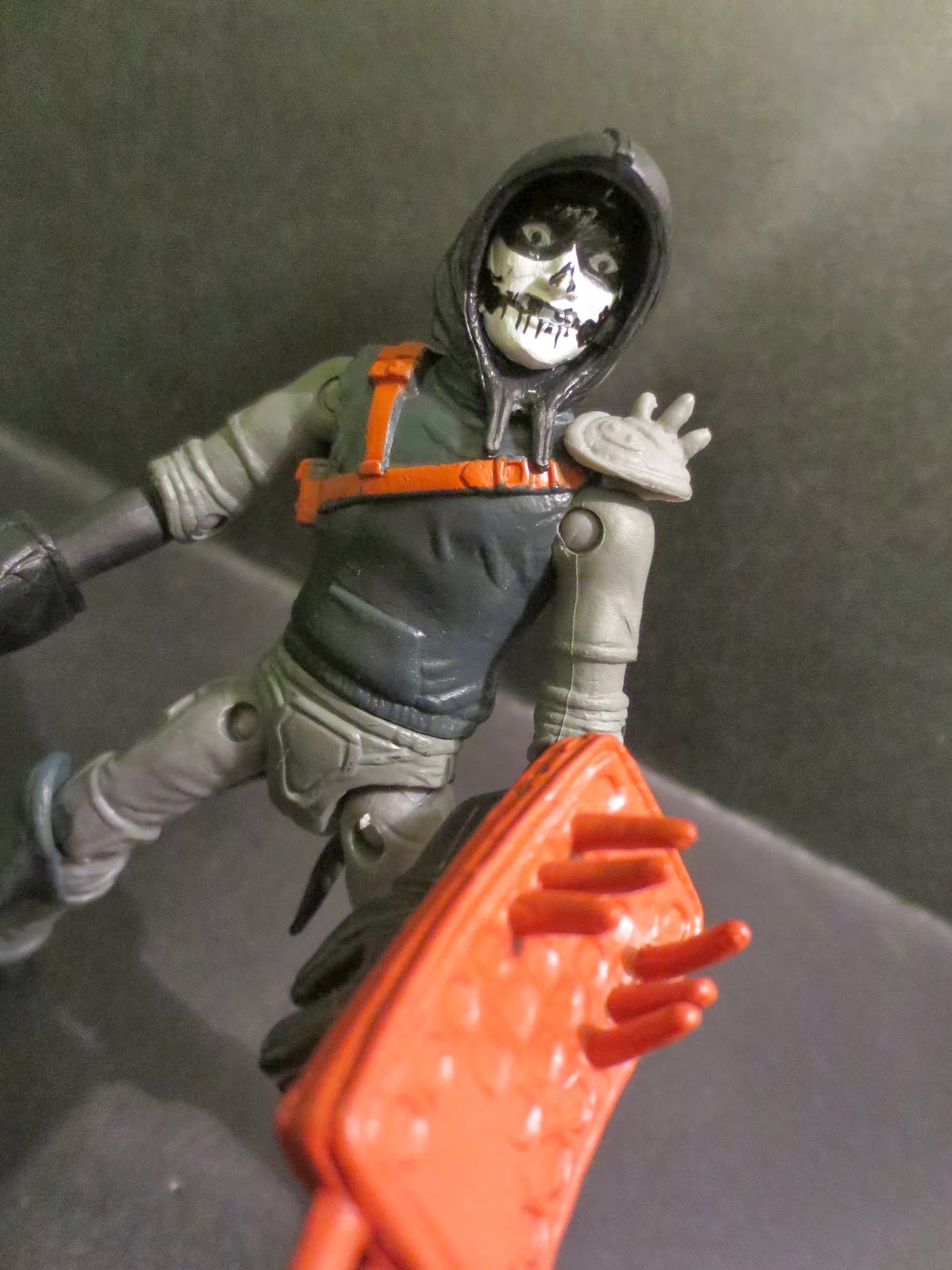 Casey Jones has a really interesting and unique sculpt that captures his vigilante nature. He's decked out in some sort heavy duty pants and shirt set with a sleeveless hoodie over top of things. The costume is really interesting with lots of cool details like the visibly ripped edge of one of the hoody sleeves, the hand pocket on the front of the hoodie, and rolled cuffs on the pantlegs. He's also covered in random pieces of athletic padding: goalie's gloves with some sort of spiked pad on his left glove, random knee and shin guards, and a single spiked shoulder pad. 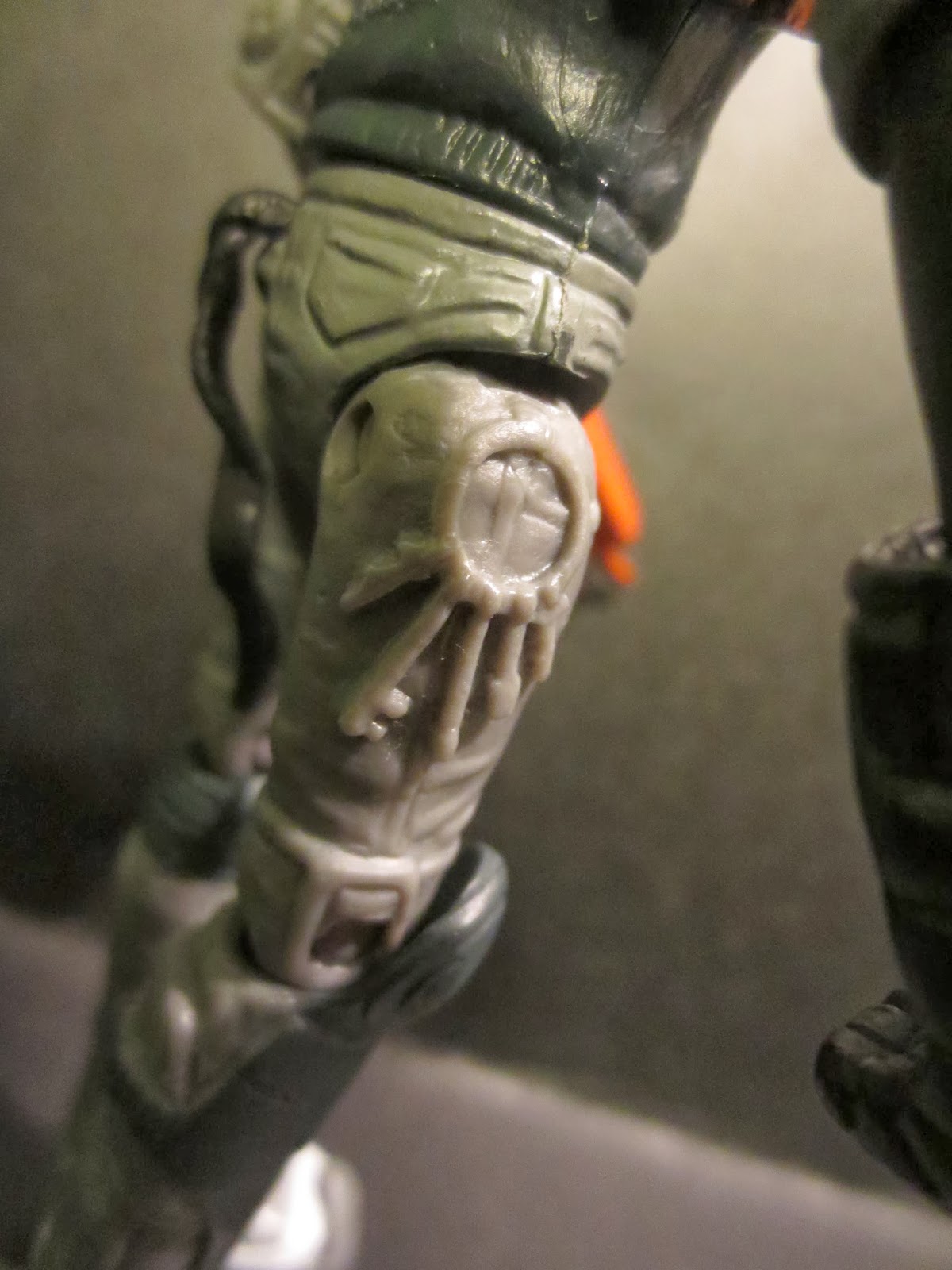 Like the vintage figures there are also plenty of cool little details like a key ring (or perhaps a lockpicking set) on his right hip, a bandanna coming out of his rear left pocket, a bandolier across his chest, and roller-blades. Yes, Casey is wearing rollerblades! This is really cool and definitely reminds me of a detail from an early 90's Playmates figure. His headsculpt is hard to judge since he's wearing so much face paint and is largely covered by the hoodie. 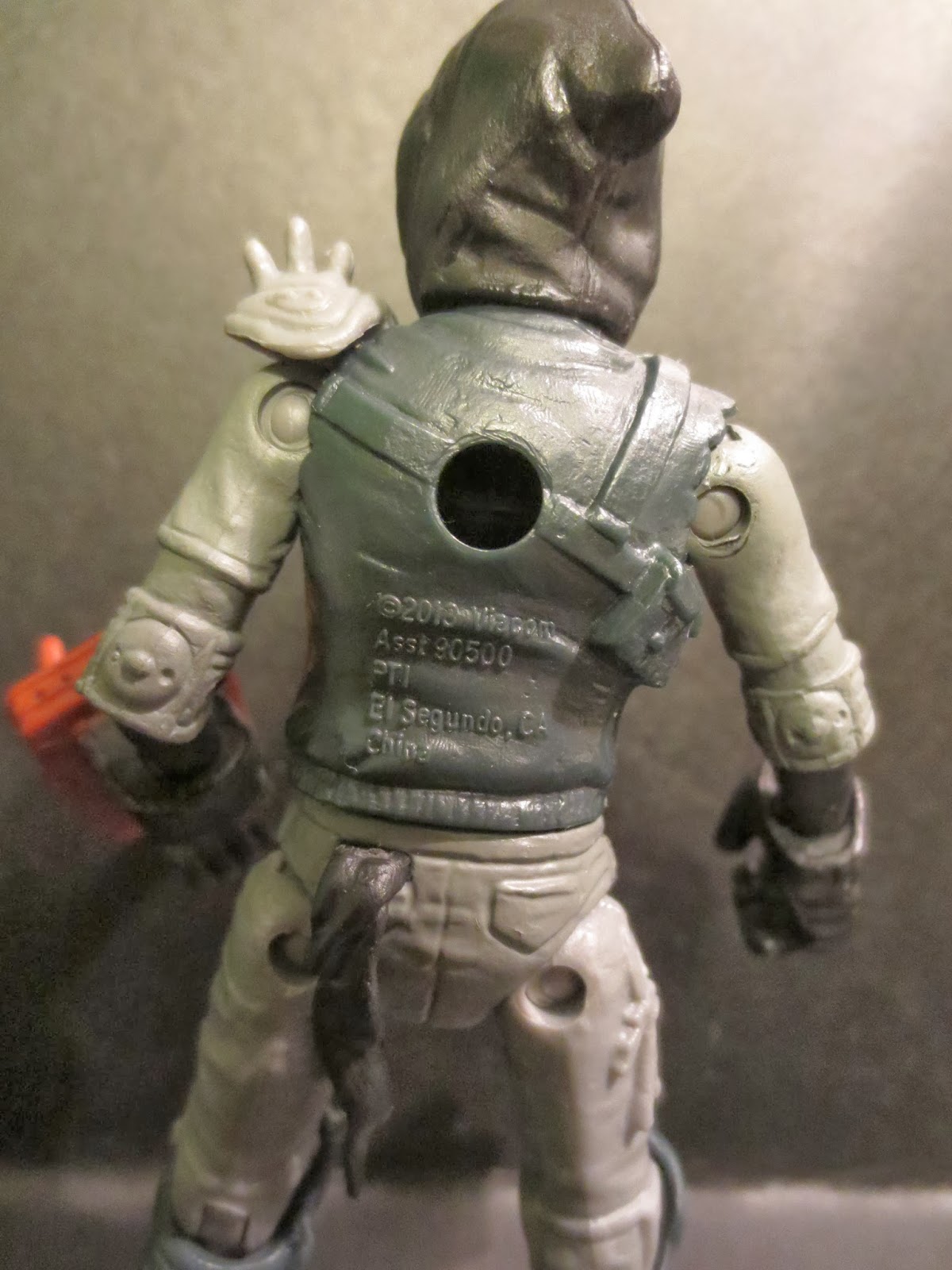 The paint on this set is both good and disappointing. Casey is better than most TMNT figures, as he has some very cool paint apps. His outfit is a mixture of grays and black and some details like the front of his bandolier, his massive arm pad, and the soles of his shoes visible from inside the roller blades. His face paint is also really creepy. Don't worry: He still comes with his hockey mask. The painted face is just an extra that helps to make him extra terrifying. Kind of like that episode of the Munsters where Herman goes to a party dressed as King Arthur in a full suit of armor and ends up winning a costume contest because, when he takes his helmet off, everyone thinks he's wearing a second costume underneath. In a city of wierd mutants and ninjas, Casey needs all the help he can get to up his intimidation factor. The disappointing part of the paintwork is actually pretty minor, but kind of weird. While the front of his bandolier is painted, the back of it is left completely unpainted. It's just a really odd decision that stands out despite the rest of the figure being awesome. 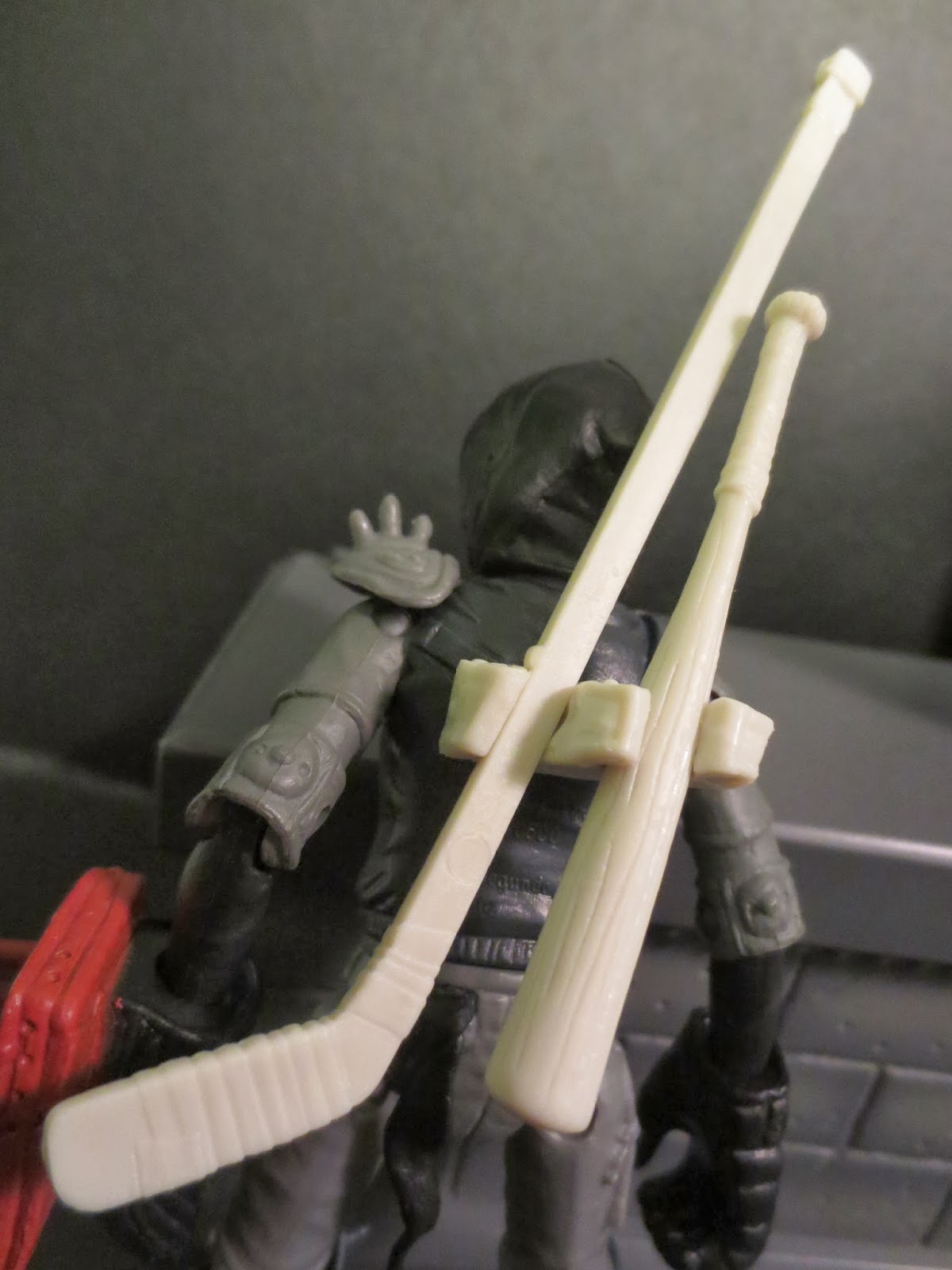 I was a bit disappointed that Casey doesn't come with a golf bag, but he does have a clip on the back of his bandolier (it is removable) that holds his baseball bat and hockey stick. They're simple accessories, molded in a cream colored plastic, but they look good and Casey can easily hold them. No cricket bat, though, which is a disapointment as one appears on the character's profile picture on the back of the card. I guess that's because noone understands cricket. You gotta know what a crumpet is to understand cricket. 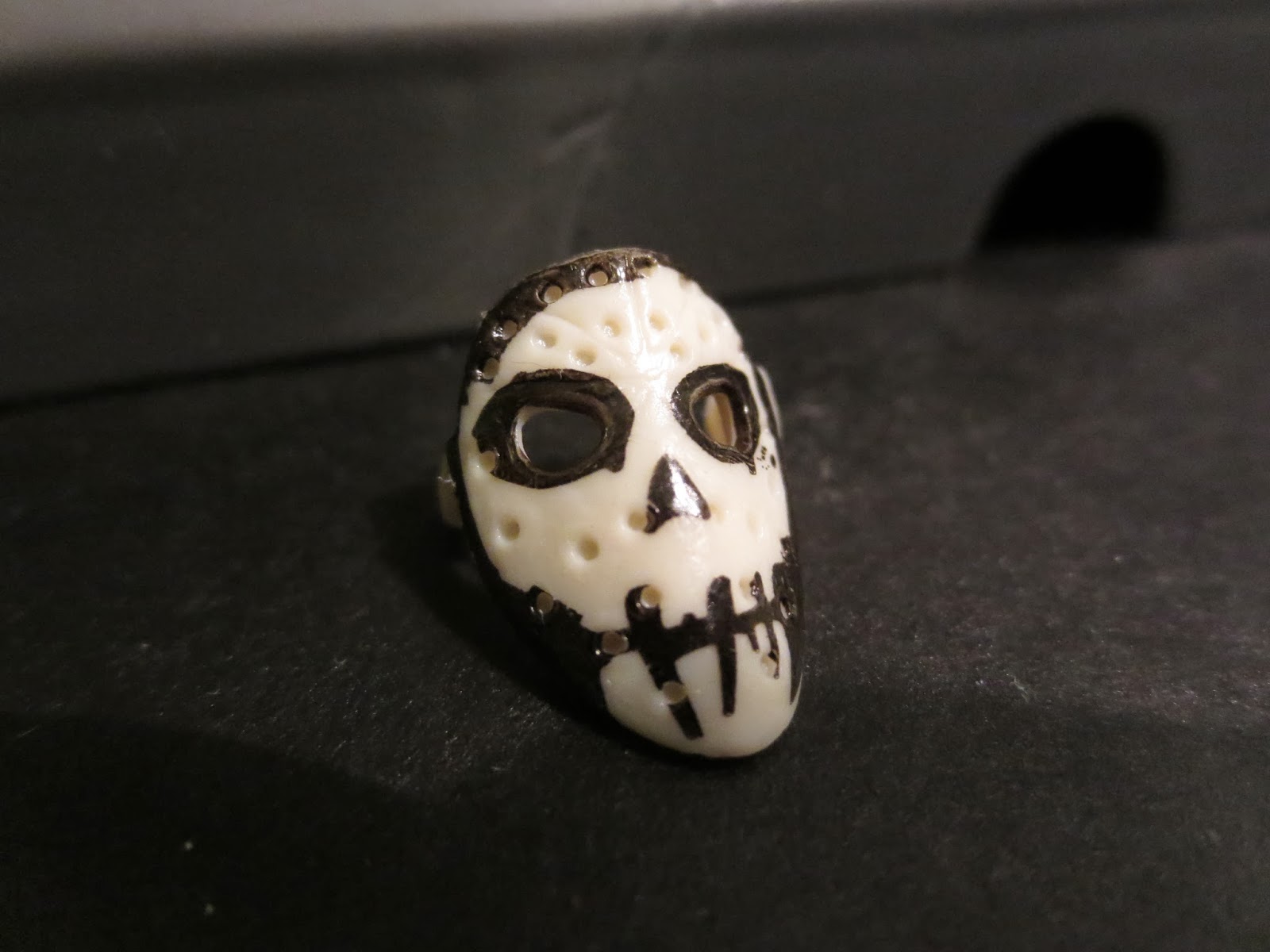 His hockey mask, however, is excellent. It clips over his face, stays on tight, and looks fantastic. It has a great sculpt and looks like Casey very crudeley painted it to resemble a skull. He's a terrifying figure when he has it on. 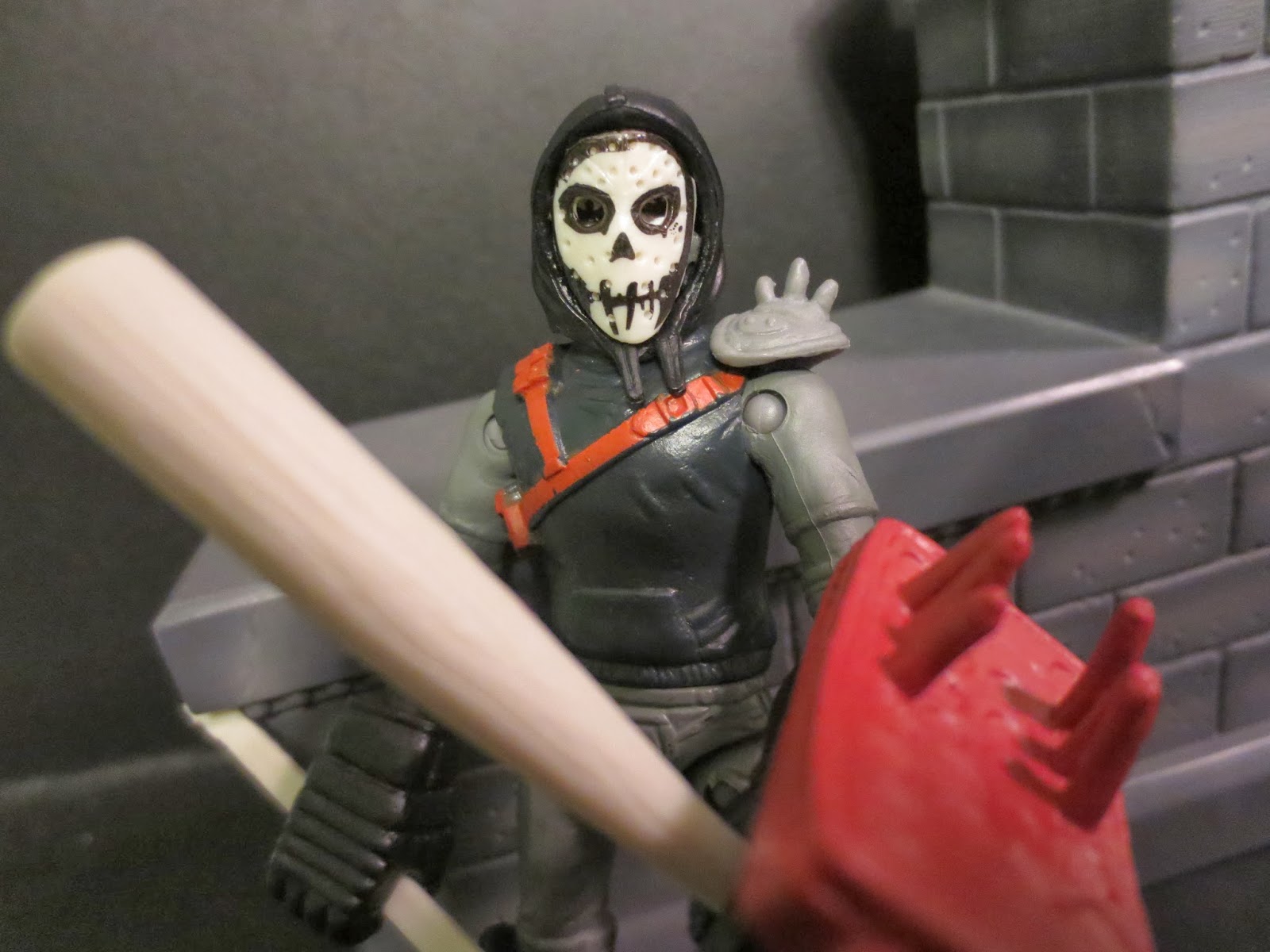 Despite my minor gripes (the lack of elbow swivels and the unpainted back of the bandolier) I really like this figure. It was a Valentine's Day present from my wife and was an excellent gift. Nothing tells me that someone loves me like a Casey Jones action figure and I feel confident in giving this guy a Great and a half. He's easily up there with the series one turtles from 2012 and is an excellent looking figure. If he were in a 6-7 inch scale, I could see everyone wanting this guy for their superhero collections simply to serve as a great random thug. While you might not first recognize him as Casey, give him a once over and you'll see most all of the old familiar details. I like this design so much I think this will be end up being my Hero-con costume for this summer. I'd better start working on my "Goongala" now! "The class is Pain 101. Your instructor is Casey Jones." 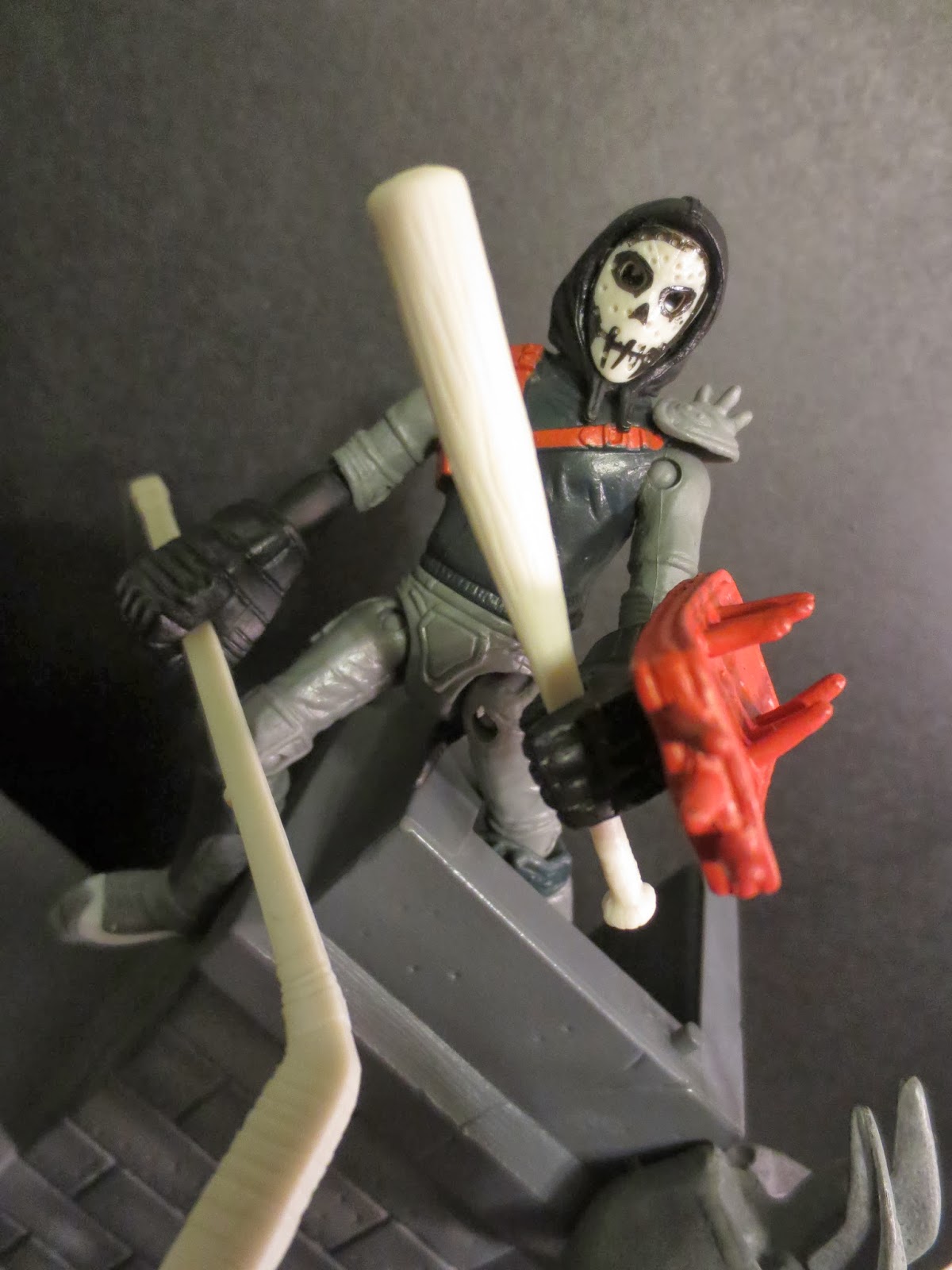 While Big Bad Toy Store has plenty of TMNT stuff in stock, they don't seem to have Casey Jones available. You might just have to hunt around for this guy, but he's definitely worth it.  In the meantime, why not check out some of our other TMNT reviews?