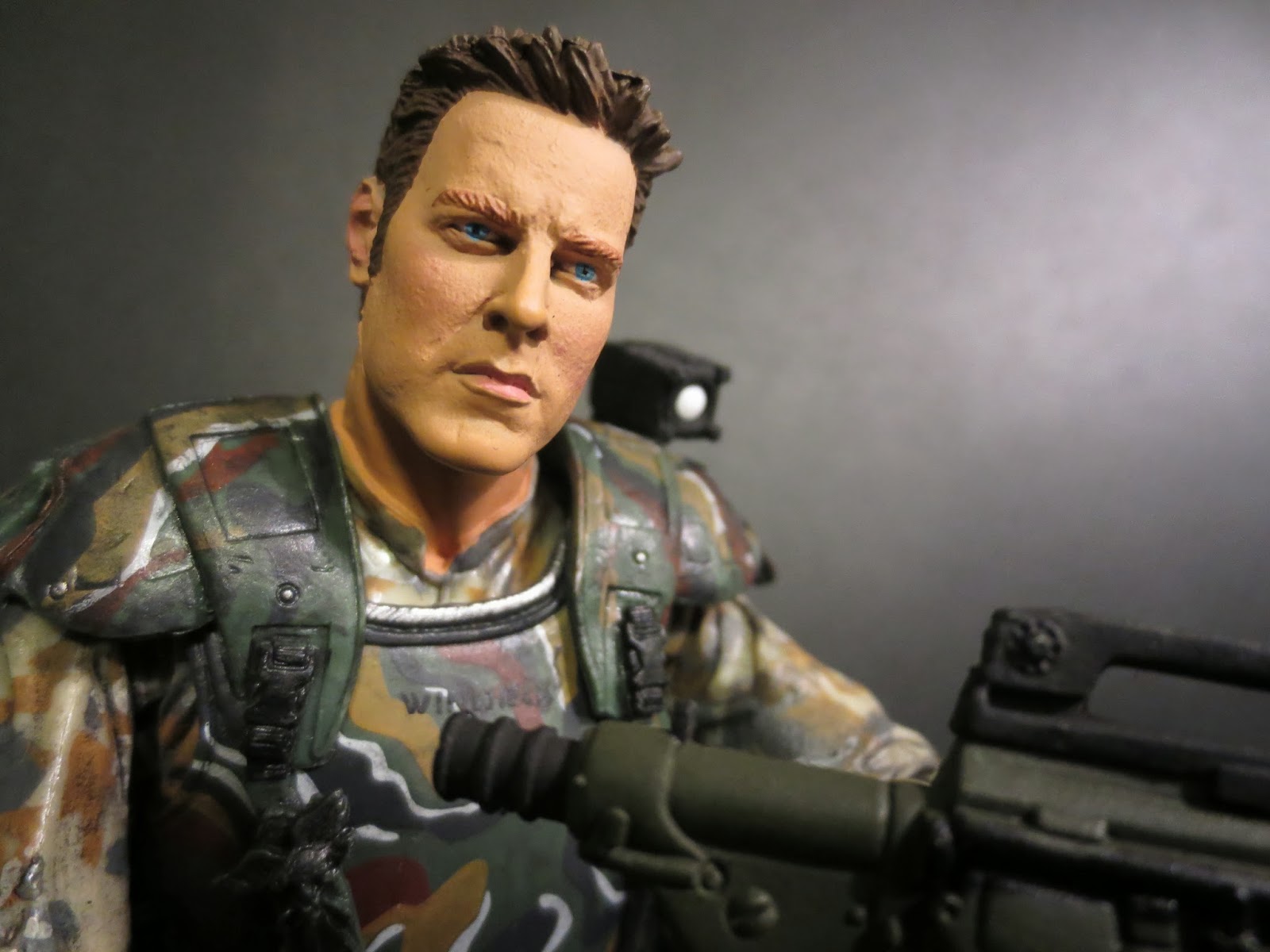 Now Hicks and Hudson don't have to hunt bugs by themselves anymore; Sgt. Windrix is here to make sure the Xenomorphs get served up roasty and toasty! Who is Sergeant Craog Windrix, though? He's definitely not a character you'll see in the film Aliens; he's a new character with a backstory that is simultaneously touching, awesome, and heartbreaking. Sgt. Windrix is based on an actual man: Craig Windrix, the brother of NECA sculptor Kyle Windrix. The figure was revealed at Preview Night of SDCC 2013 and we quickly learned that Craig Windrix was a friend of the good folks at NECA who was fighting Stage 4 Stomach Cancer. Since Craig was an Aliens fan, NECA worked with Fox to get permission to create this figure to honor their friend and to give collectors another awesome Colonial Marine to add to their shelves. Unfortunately Craig lost his battle with cancer last week. Today, we're going to review this figure that stands as a loving tribute by the NECA family to a friend and brother. I'm sure that we've all lost loved ones to cancer and I hope that in some small way, Sgt. Windrix gives us some hope and reminder of the brave spirits of our loved ones but also of the grim determination we all need to show to eventually find a way to kick the ass of this insidious disease that's far worse than any alien infestation (I don't usually use profanity, but for cancer? That bastard gets an exception). Lead the way, Sgt. Windrix! More after the break.... Sgt. Windrix stands about 6 7/8 inches tall which puts him in line with most other movie and video game based lines that NECA has released. He's done in the standard super realistic style that NECA is a master of when dealing with film properties. Windrix shares many parts with the previously released Hicks and Hudson, but he's also got a few unique elements of his own. As has been more common, NECA does list the credits for this figure on the packaging so you can know who designed and made your toy. Since it's a full list of credits, you'll have to just check out the packaging yourself. 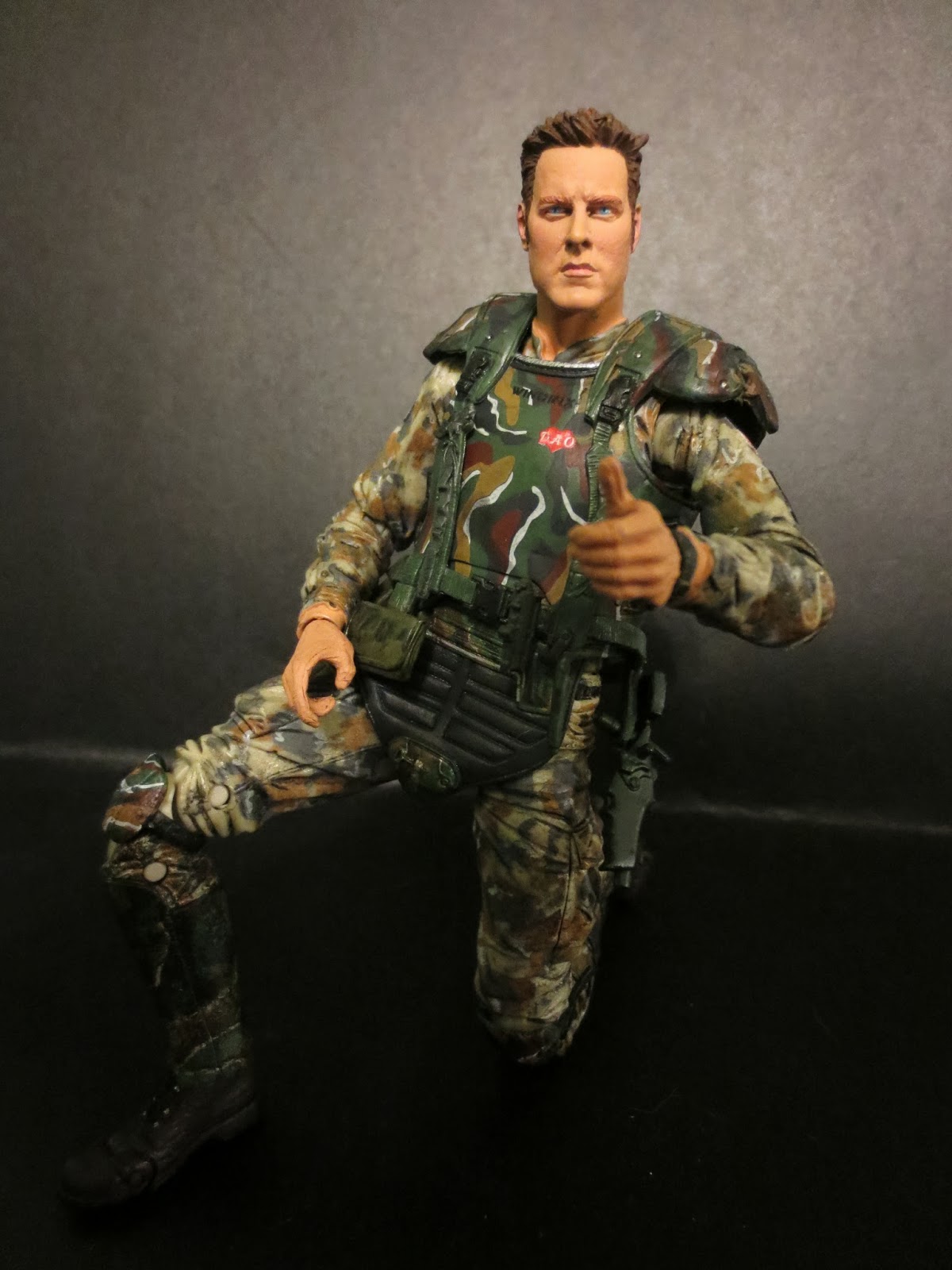 Windrix is as well articulated as the previous Colonial Marines, featuring:  hinged toes, ball jointed ankles, double hinged knees, swivel thighs, swivel/hinge hips, a ball jointed torso, swivel/ hinge shoulders, swivel/hinge elbows, swivel/ hinge wrists, and a ball jointed head. The only difference in the articulation I notice is that Windrix doesn't have swivel biceps. His articulation does feel a lot sturdier and more refined than the earlier Marines, though, who often had joints that were stuck out of the package. He can take all the same great poses as the previous guys and has an easier time doing so. Isn't it amazing how a company like NECA can refine things from wave to wave while larger company often say they need years to make small changes? There is one problem I have with the articulation, though, and that's the difficult I'm having in getting him to hold his flamethrower properly. The hinges on his wrists are both lateral, whereas vertical movement for one wrist would have allowed for more flexibility. 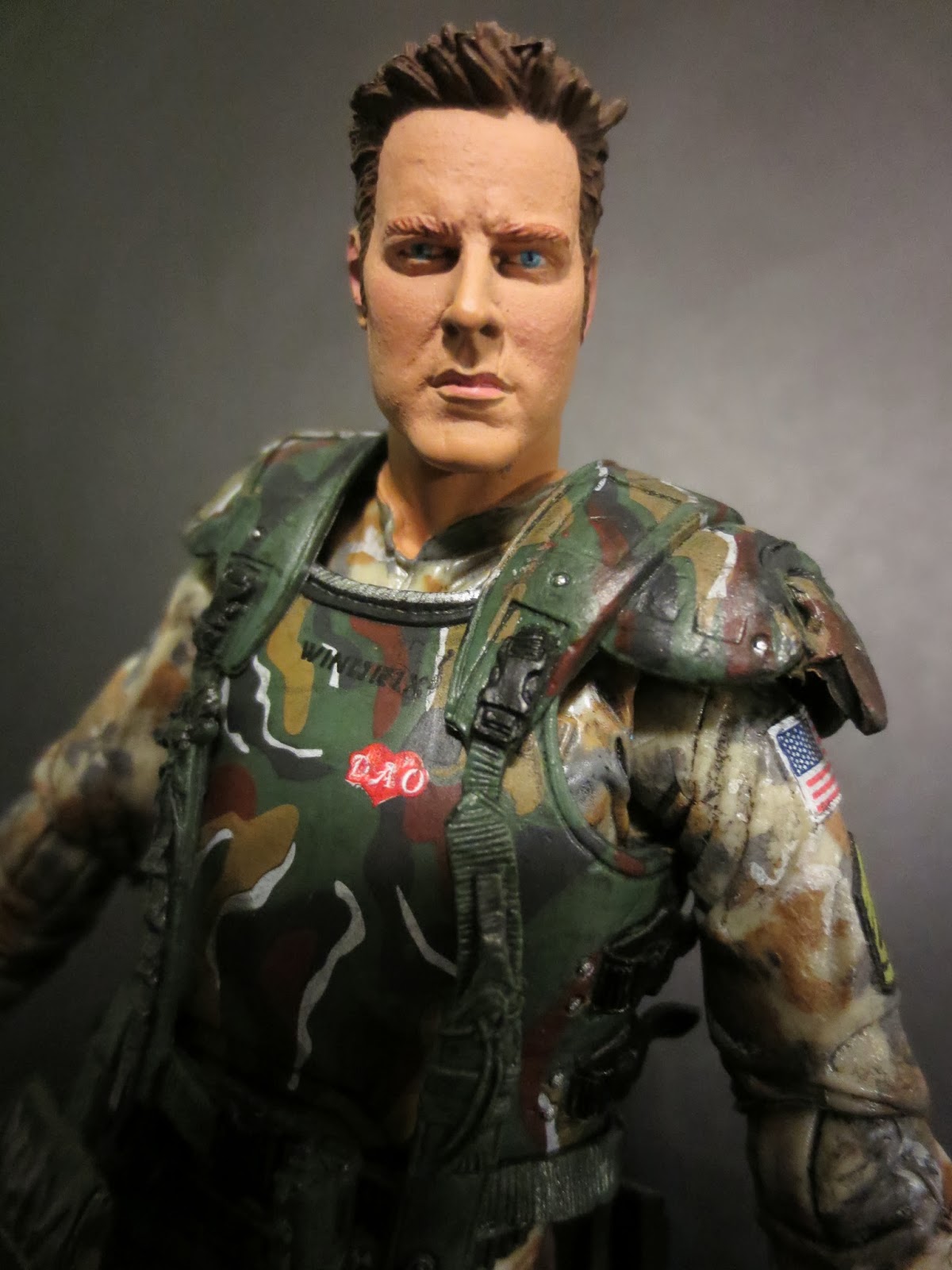 I've covered most of this body in my Hudson and Hicks reviews, so I'm not going to go over every little detail here. While most of the body is shared with both Hicks and Hudson, the body armor is specifically shared with just Hudson (you can tell by the specific battle damage on the rear left shoulder). What is new, though, are the full sleeved arms. While Hudson has his sleeves rolled up and Hicks went sleeveless, Windrix has fully sleeved arms that look and function perfectly. The level of detail perfectly matches the rest of his BDUs that we can see beneath his armor. The headsculpt is perhaps the key part of the figure and it looks fantastic. From pictures I have seen of Craig, NECA really nailed his likeness. He has a great, steely gaze and nicely detailed short, spiky hair. He looks like the kind of guy that could toe to toe with an alien without blinking. Excellent work. 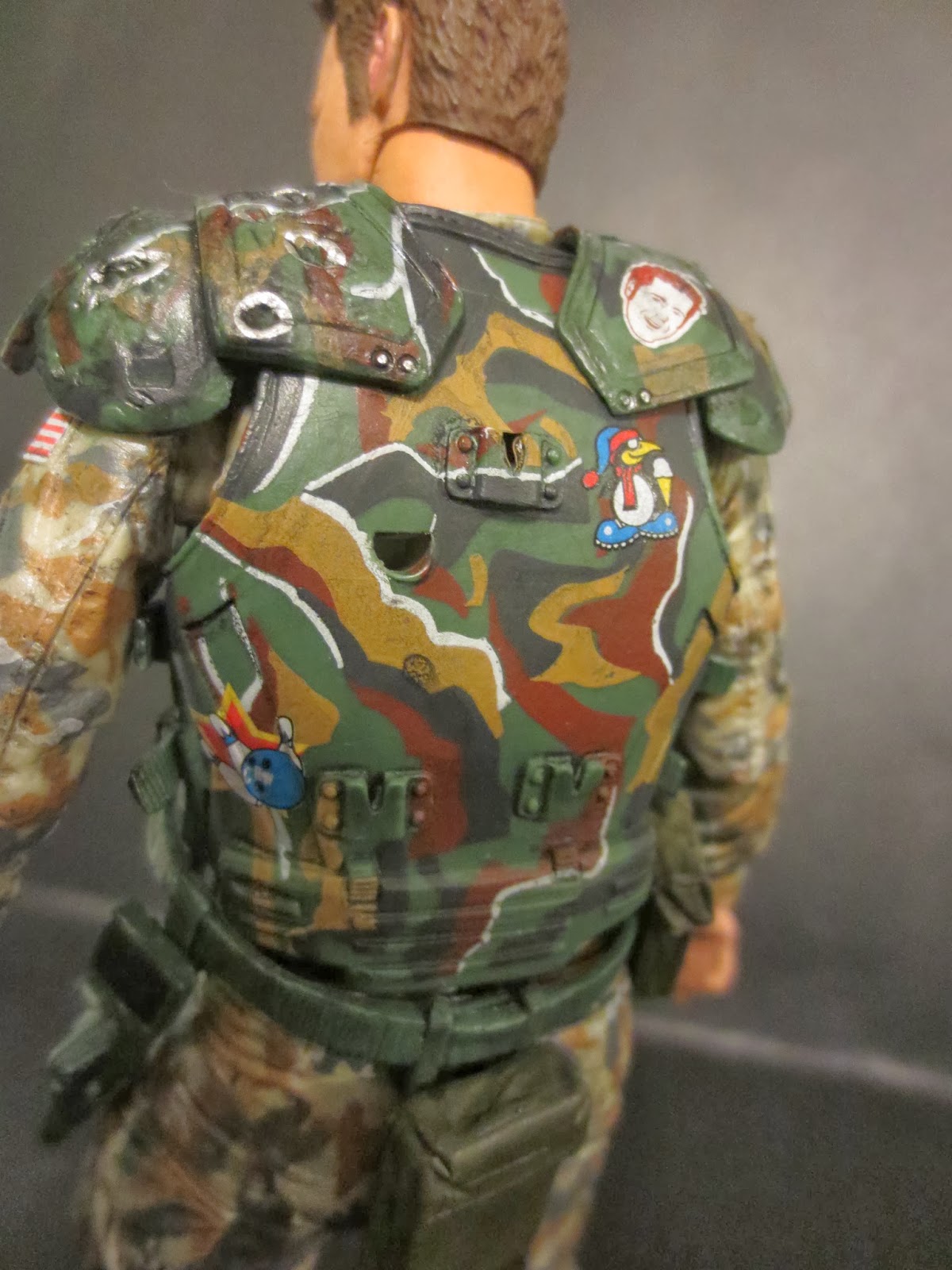 NECA scored a home run with the paint work as well. The headsculpt is perfection and while the armor is excellently done, it's the little details that really stand out. All of actors portraying the Colonial Marines in the film customized their armor, so it's appropriate that Windrix has custom designs on his armor as well. "Windrix" is written in black letters on the upper part of his chest (all of the marines have this element) while a heart with the name "Dao" is featured on his left breast (that's Craig's girlfriend). On his left shoulder sleeve is a Sergeants stripes and an American Flag while his right shoulder has a blue and yellow squarish logo that I do not recognize. Anyone know what this is? On his back, Windrix has a red and white image of his face (the logo from his support page, "5000 miles of Craig"), a penguin eating a snow cone (NECA says it references a favorite restaurant), and a bowling ball knocking over three pins with initials on the ball (a tribute to his late father). These little personal touches, in addition to the excellent work on all aspects of the uniform, armor, and webgear, just make this another standout figure. 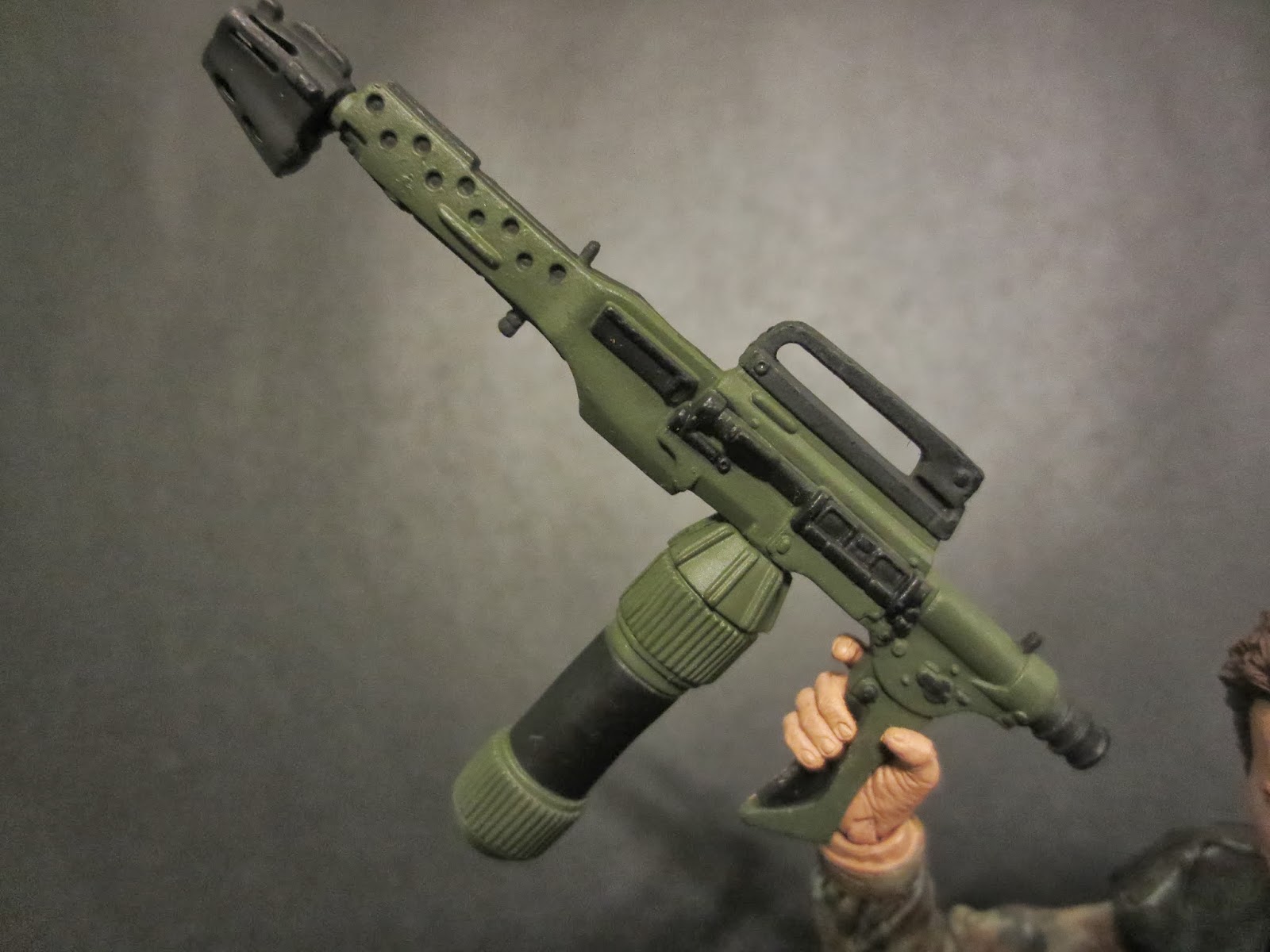 Like most of the Aliens figures, Windrix is loaded for battle. The most significant accessory he comes with is his flamethrower, but he's got lots of other cool stuff, too. Sgt. Windrix includes:
- M240 Flamethrower- Xenomorphs hate flames, so the "flame unit" is an indispensable tool for cleaning these guys out of their hives. This is an excellent sculpt and a very sturdy feeling piece that has some great green and black paint apps. 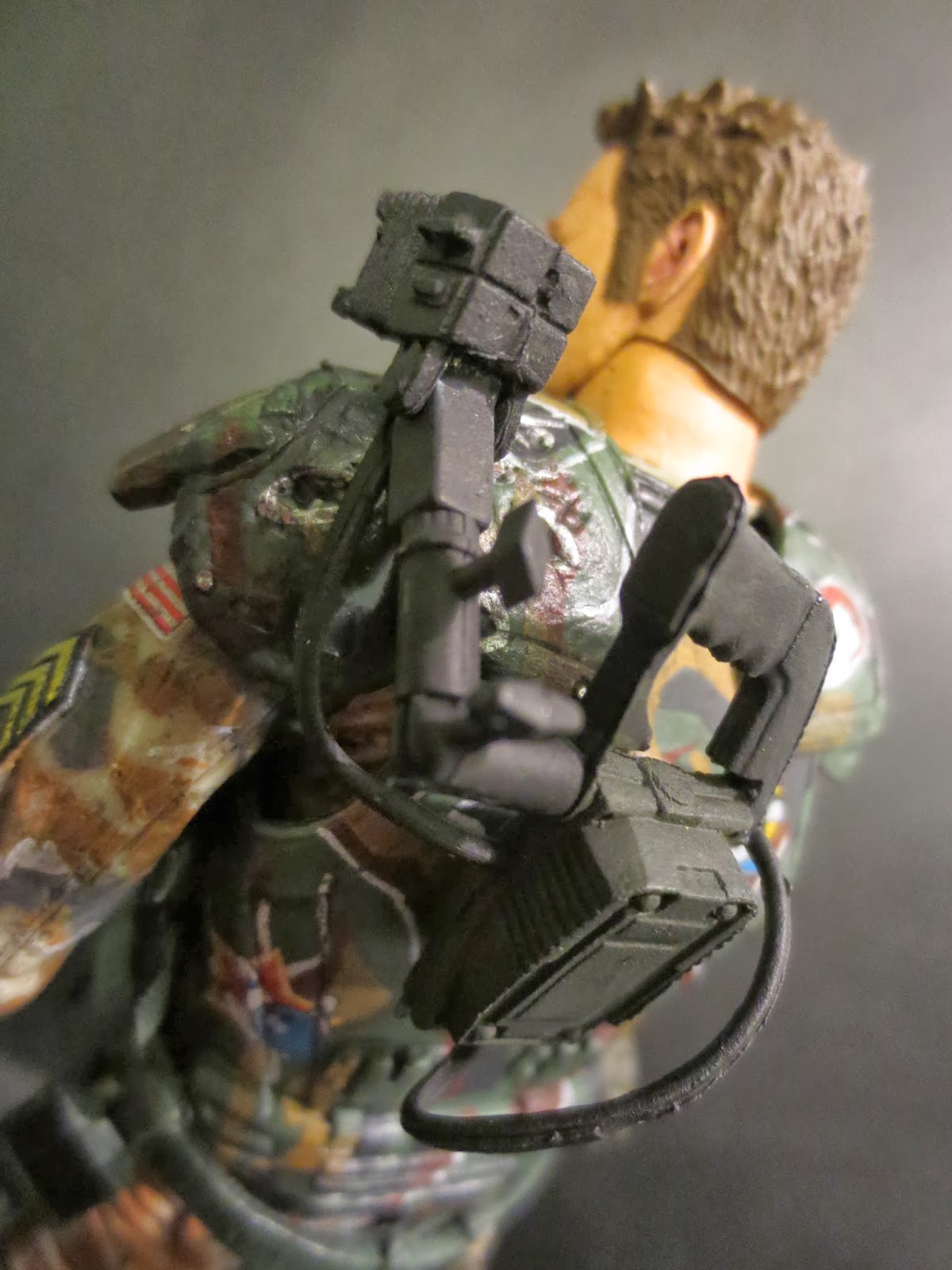 -TNR Shoulder Lamp- Attaching into the figure's back via a plug on the device, the TNR Shoulder Lamp's bulb is mounted over the left shoulder. The unit features a small wire that can fit into a small port on the back of Windrix' armor, and a handle so the device can be held if needed.  Again, it's super detailed. Just be careful removing it from the figure. 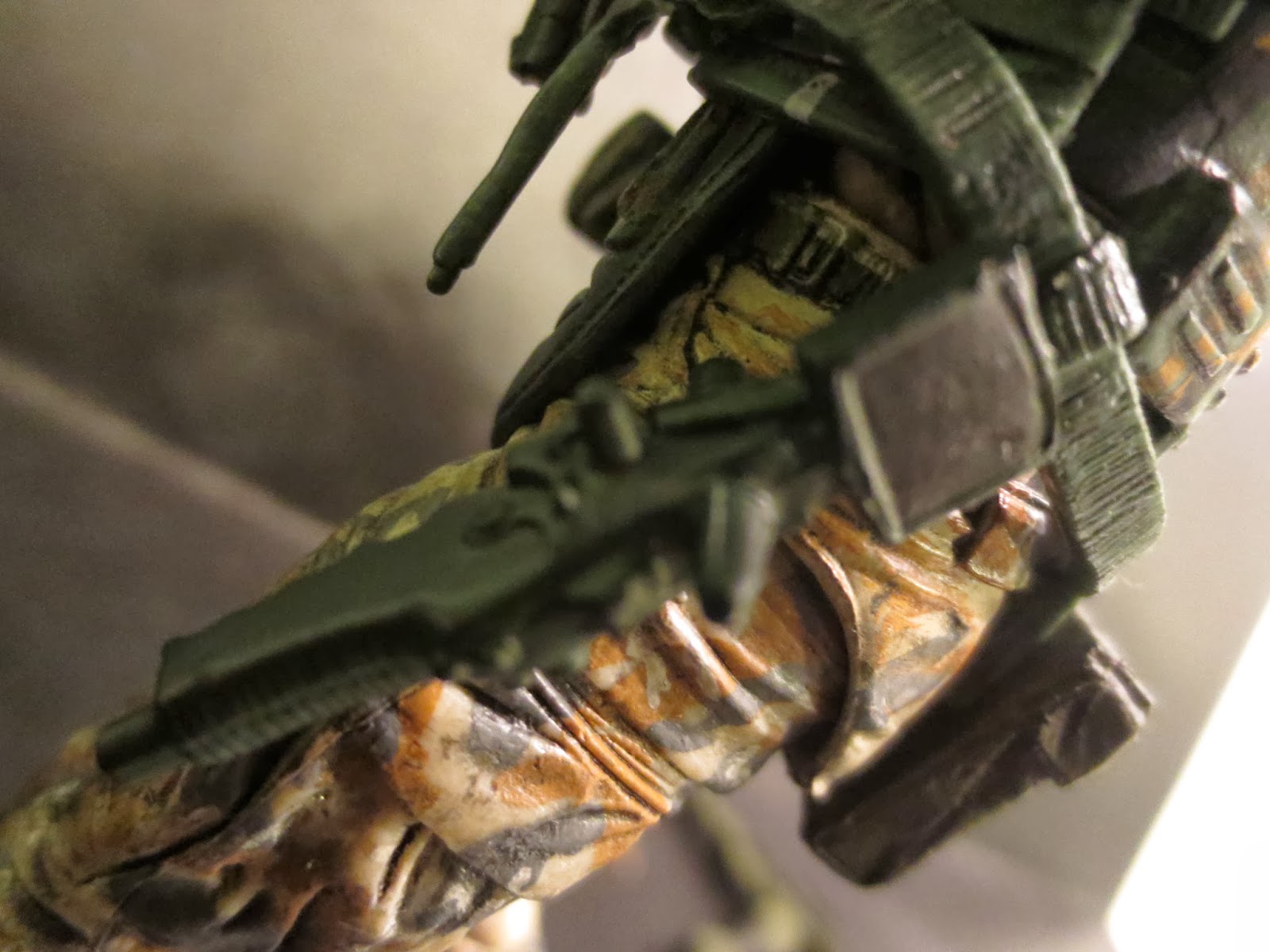 -ME3 Portable Welder- Look on the left side of Windrix' web gear and you'll find this little piece. It's actually removable and features a little paint app of the visor you would look through when welding. Very cool little extra that is easy to miss. 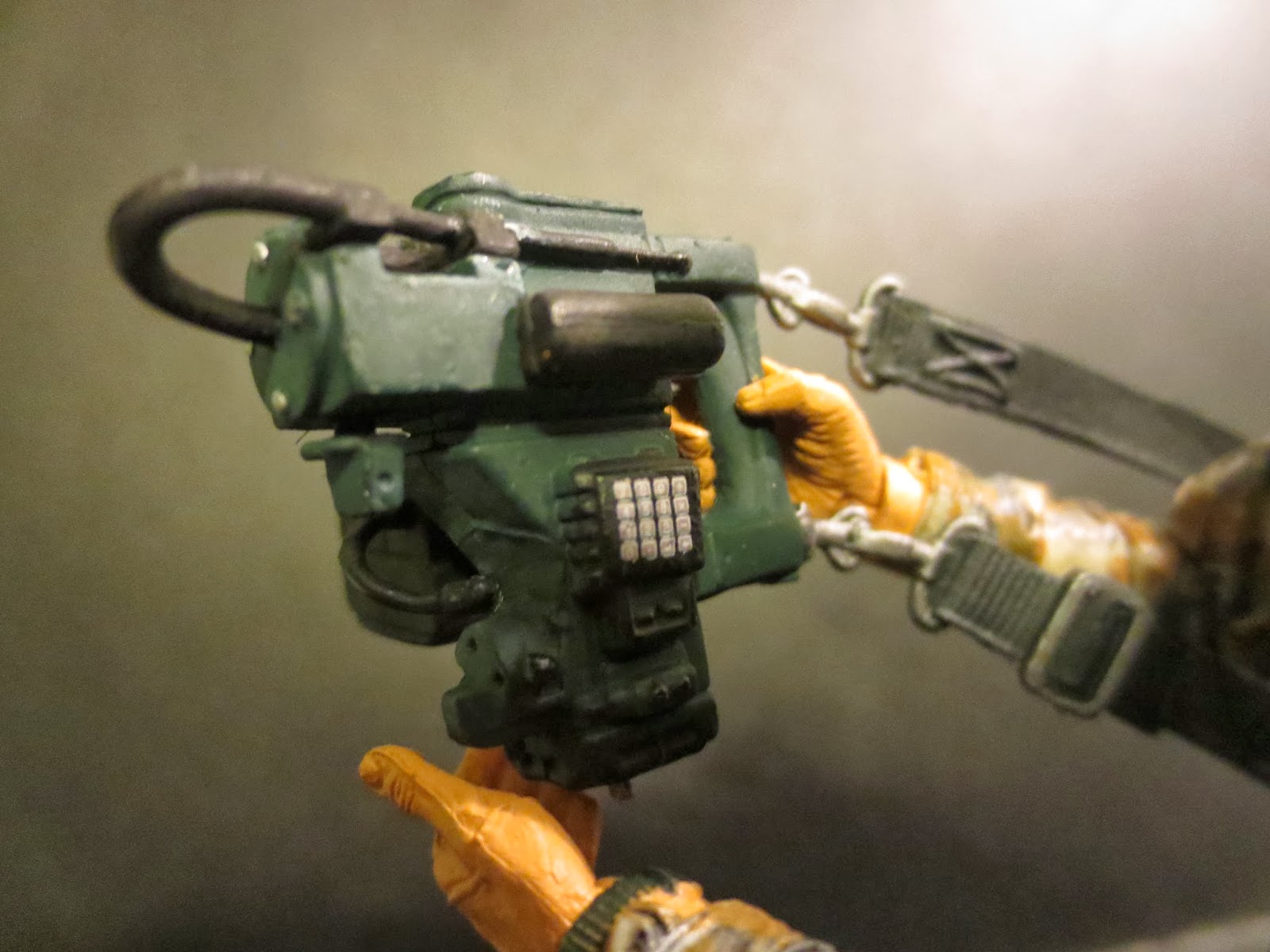 -Motion Tracker- Exactly like in the film, this motion tracker will let you know that trouble's on the way. Well, it does that through a sticker attached to the "view screen." It's got a great keypad painted on the side as well. There is so much detail on this thing! 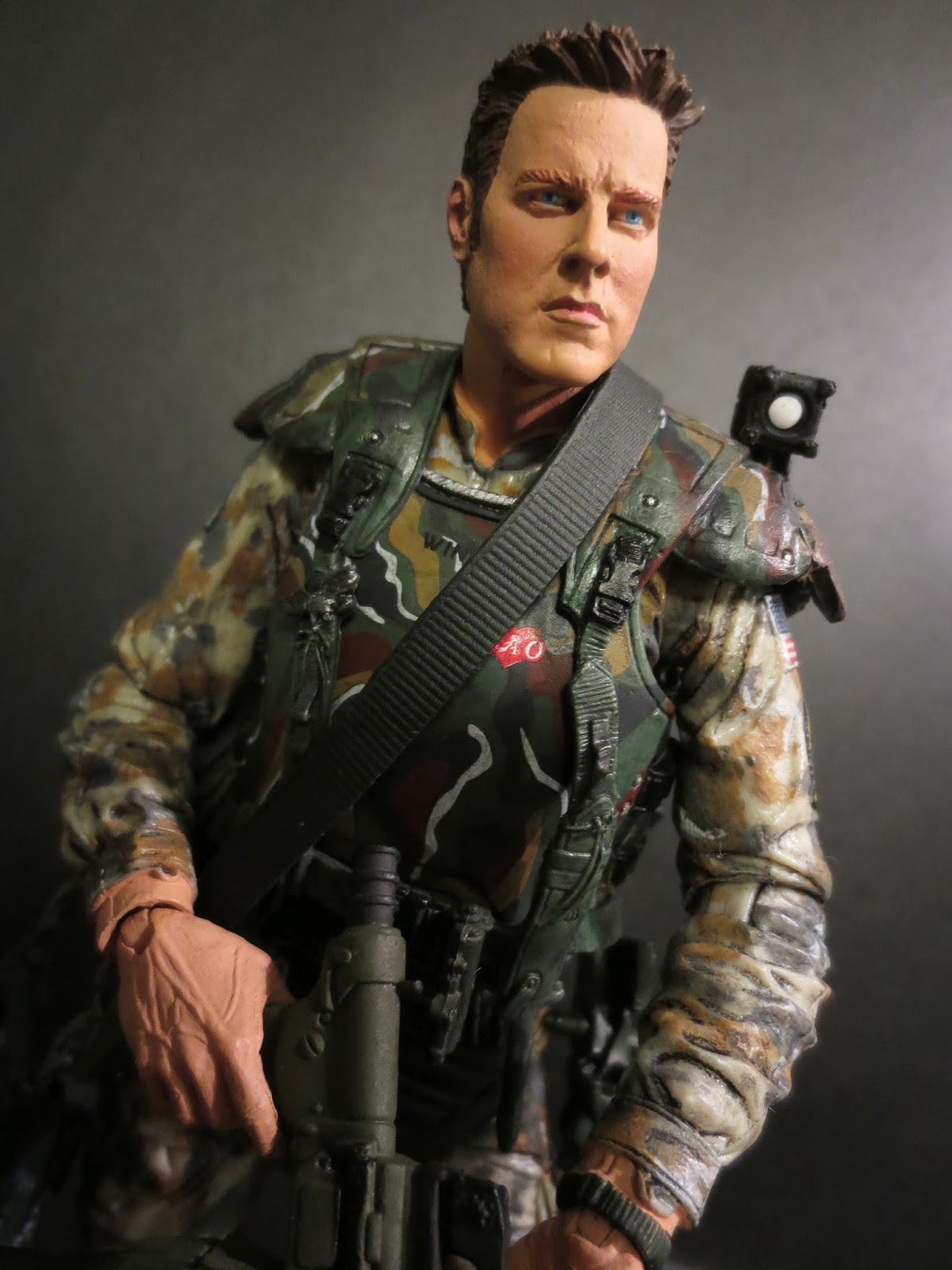 On NECA's Twitter page, an individual named Frankie J Ives commented, " Craig Windrix is the best marine produced for this line. His face is completely fearless. What a tribute." I have to agree. Not only has NECA continued to refine their technically excellent Aliens line here but they've also made a figure that is injected with love, heart, and soul. Windrix really does look awesome and fearless. I can't help but give this release an Epic. NECA has really done everything they possibly can to make both the Aliens line and this figure extremely special. Thoughts and prayers go out to the Windrix family and major respect goes out to NECA for being quite clearly one of the best companies in the business. Stay frosty, Sgt. Windrix.

Big Bad Toy Store currently has a set of the "Big Chap" Xenomorph from Alien, a blue Xenomorph from Aliens, and Sgt. Windrix if you want to add them to your collection. I've reviewed plenty of other Aliens stuff here on ThEpic Review including: Private William Hudson, Corporal Dwayne Hicks, the Xenomorph Warrior, and the Kenner Space Marines and first series aliens.